PHOTOS: Guardians of the Galaxy Coaster Tunnel Gets a Roof – Construction Update December 2018

This is a Guardians of the Galaxy Roller Coaster in Epcot Construction Update for December 2018.   Lots of updates to get to with Epcot’s first roller coaster under fast and furious construction including the Guardians of the Galaxy attraction building becoming invisible into the Epcot sky and the launch tunnel getting a track and now being covered.

In our last update last month we saw lots of changes to the attraction.  Biggest of all was the news that the track for the Guardians roller coaster is now being laid, and most notably we saw a steep incline piece inserted into the end of the launch tunnel leading to the gravity building.  This means the coaster trains are going to be launched Rock ‘n’ Roller Coaster-style up and into the top of the building to start out, then they’ll slowly (or fastly rather) make their descent downwards.

Special thanks as usual to @Bioreconstruct who always takes some amazing aerial shots of the construction projects around Walt Disney World, check him out on Twitter!  Ok, let’s see what kind of progress we can see for the Guardians of the Galaxy roller coaster in December…

Before we get over to the attraction building we want to check out the old Universe of Energy building where the queue for the roller coaster is going to be.  Looking at the roof you can see a hole has been cut smack-dab in the middle of the roof.  Not sure what this is for but my guess is something to do with preparing the ventilation of the building.  Maybe the Disney Skyliners will have a similar ventilation system in the gondola cars…? 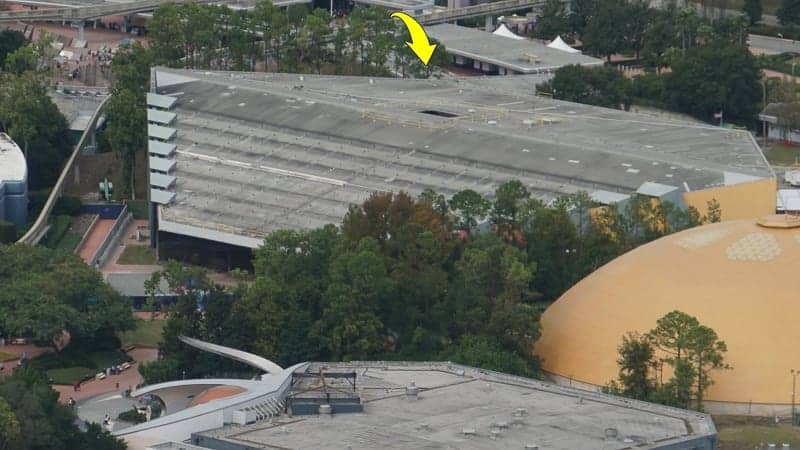 Here guests will be treated to a variety of pre-loading shows with videos and no doubt all sorts of crazy artifacts from the Guardians of the Galaxy movies.  We know Peter Quill visited Epcot when he was young, will we get a picture of him with Figment perhaps??

Construction crews are working into the night and you can see lights on in the almost empty queue building: 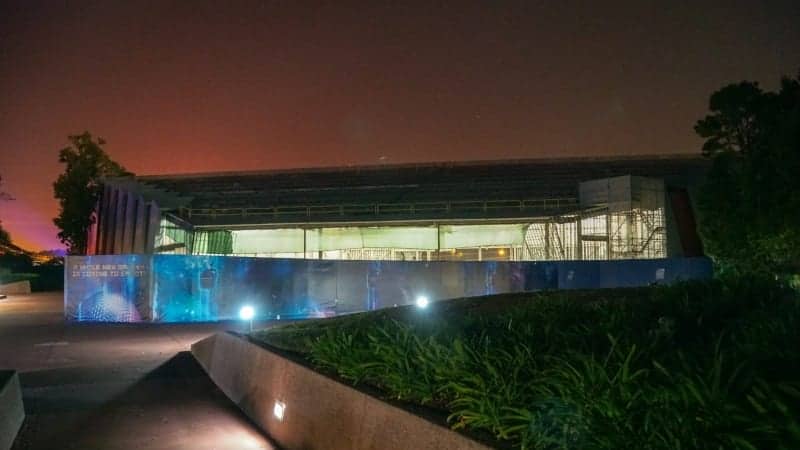 We mentioned the track being laid for the coaster going from the launch tunnel to the gravity building.  Here you have a really nice shot of the steep upwards incline of the track.  Looks like some major speed is going to need to be reached first in order to make it up there! 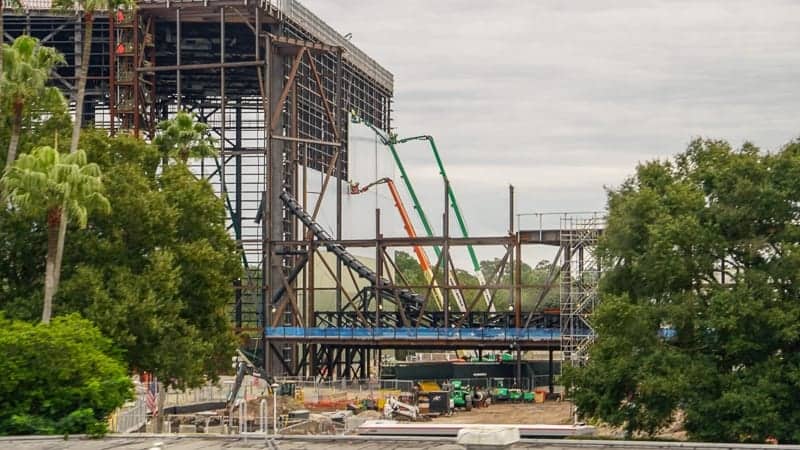 In this angle you can again see the tunnel, this time from the opposite side and the track going up.  However we also can see the attraction show building slowly getting covered in wall panels, and the steel framing disappearing behind them: 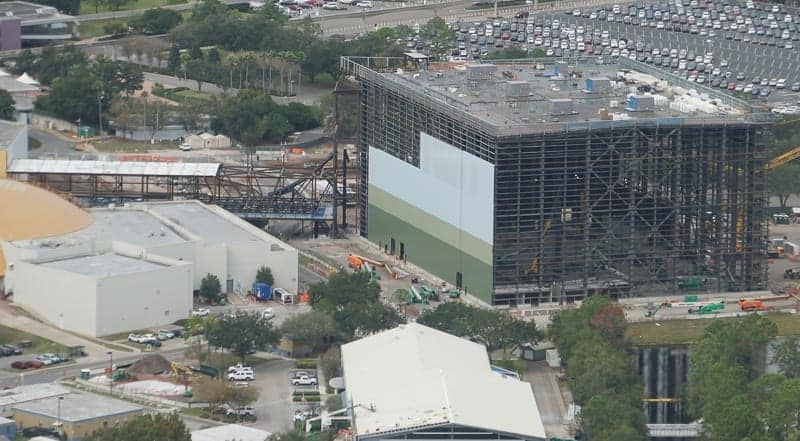 So from this angle it doesn’t seem like anything all that interesting, you might even wonder why there are three distinct colors being painted onto the exterior of the Guardians coaster building. 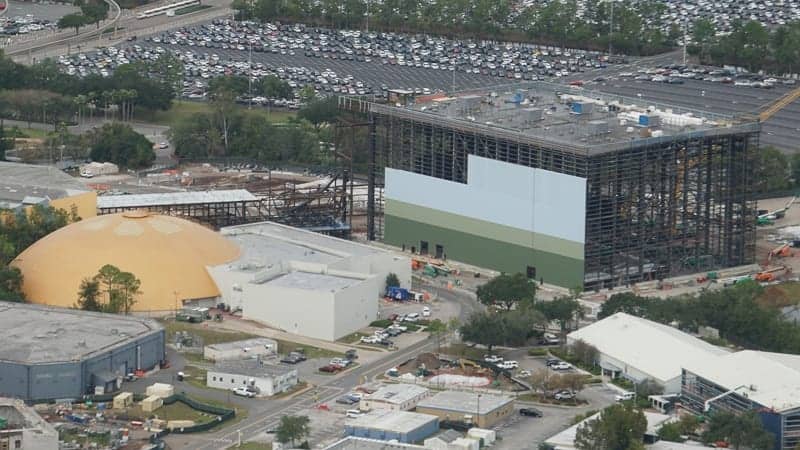 A look at the next picture paints a better picture… 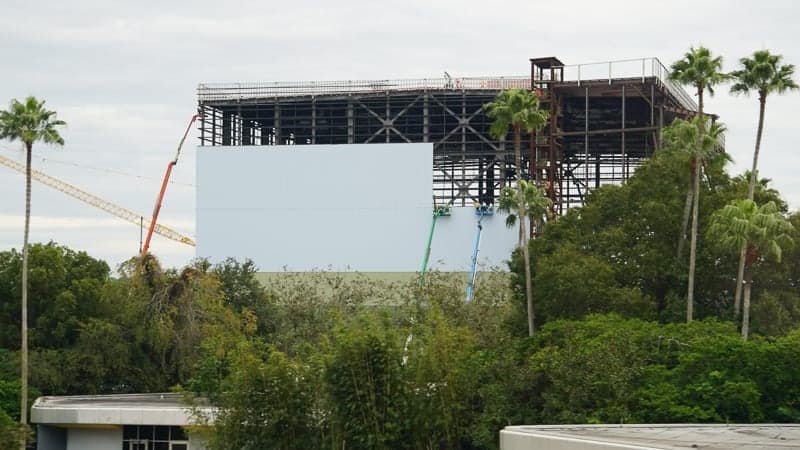 The Guardians of the Galaxy roller coaster building is disappearing into the Epcot sky.  Especially on an overcast and cloudy day, the light blue blends almost perfectly into the sky above.  The construction workers on the attraction are also working like mad as you can see the progress at about 9am in the morning: 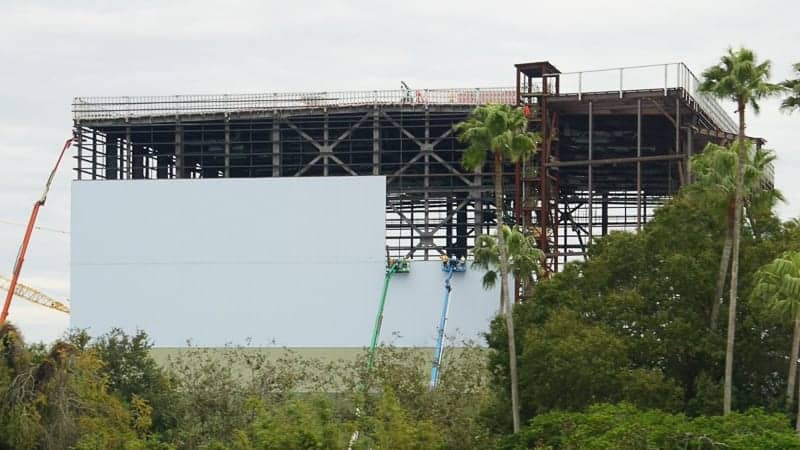 Then after 5pm a whole huge panel piece has been installed.  Check out the difference between the one above and below: 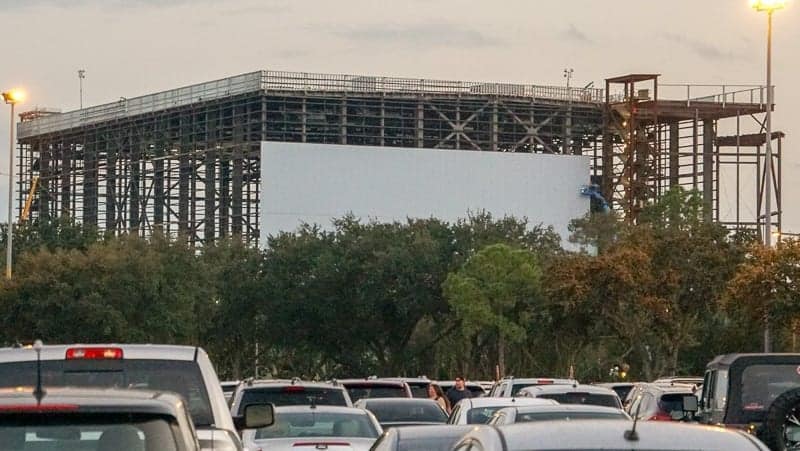 Back to Guardians becoming invisible, this photo below illustrates the concept even more.  Everyone has been up-in-arms over the size of the attraction show building as, let’s face it, it’s a monster.  I was pretty skeptical thinking that it would ruin a lot of the nightlines around World Showcase Lagoon.  While that still might be the case, especially when its only sunny out with a dark blue sky, on days like this it blends in almost to the point of really becoming invisible and not seeing it at all: 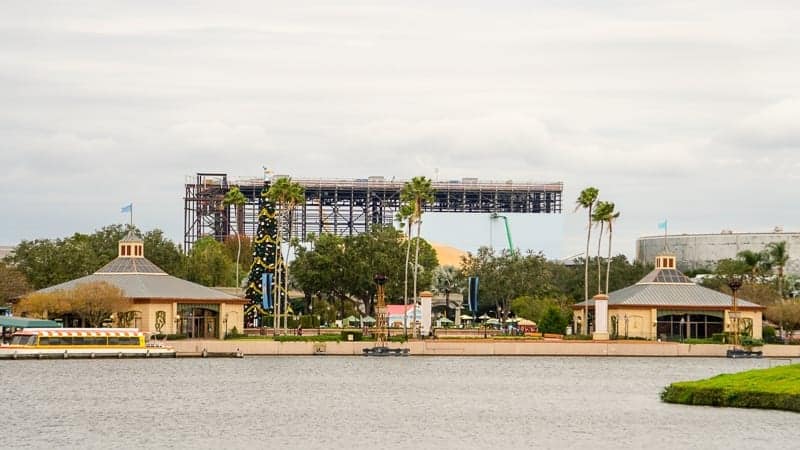 Again I’ll wait for the final product to judge, but it’s less severe than I though it would be.  Heck, the Test Track building stands out even more.

It also looks really cool at night with the building glowing a bit from the ambient light around: 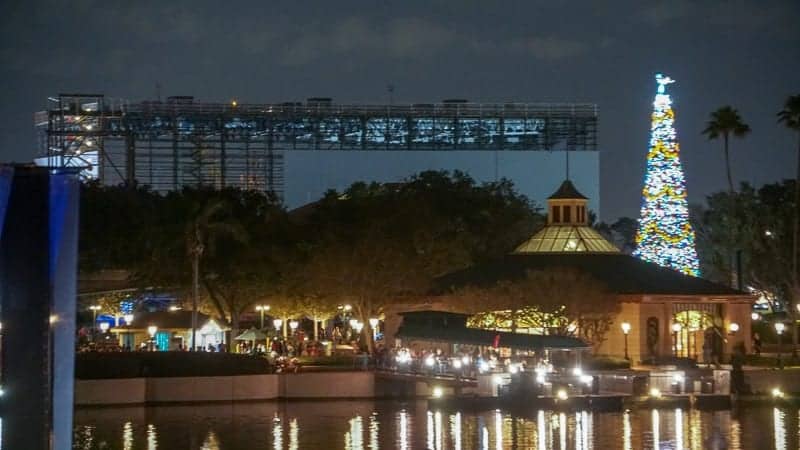 Overall I’d say this development is encouraging and should help to hide a little bit of the bad sight-lines and not make having the building that big as drastic as we thought.

Even though we have seen the first piece of track already installed in the coaster leading out of the launch tunnel, where is Disney keeping the rest of the track?  They are nowhere to be spotted near Epcot.  High above the Animal Kingdom we have our answer with the rest of the track being laid out in a staging area: 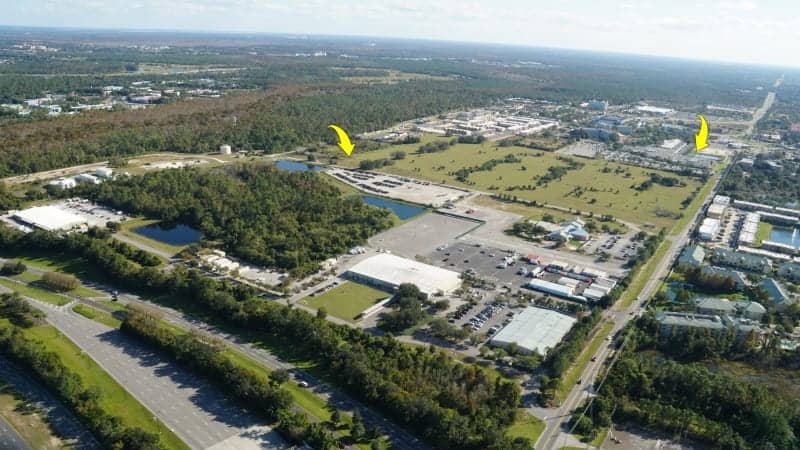 On the right arrow you see the WDW Maingate Office complex and at the left arrow is the backstage area where the Guardians of the Galaxy coaster track is being staged.

Here’s a closeup shot of the track.  You can see it separated into groupings, but it doesn’t look like they are separated by track type, but probably where they fall in order in the attraction: 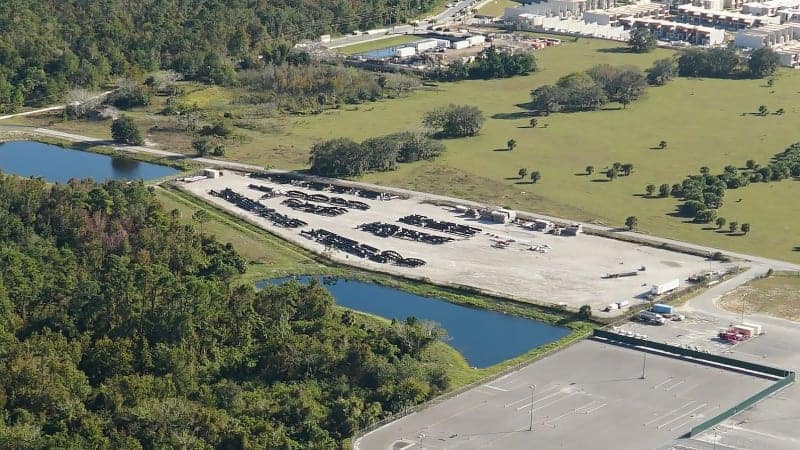 Honestly for being one of the longest indoor rollercoasters in the world it doesn’t look like there are an exaggerated number of track sections, so it’s either the perspective from being far away or not all of them are being kept here.  It’s also interesting they couldn’t find a place closer to Epcot to stage the track instead of close to the Animal Kingdom.  We’ll keep an eye out to see if they will use this same area in future projects like the TRON coaster or if another place will be used.

It’s been a couple of weeks since we last looked at the Guardians of the Galaxy roller coaster project.  A few interesting things to point out, so let’s dive in…

First of all we have a nice aerial shot of the whole project including the attraction show building.  In our last update we saw the roller coaster track all laid out at an off-site location to prepare everything.  Now that track is slowly being laid inside the show building.  These shots from a few days ago show how far along the building is and you can see it’s almost completely closed up: 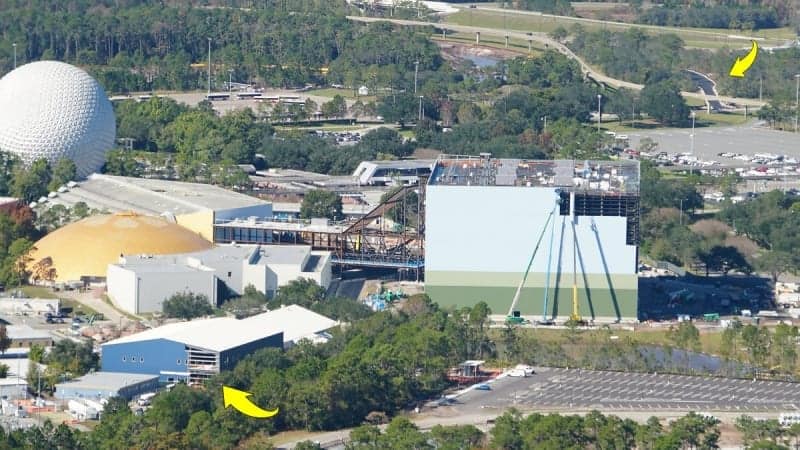 Only that one corner remains: 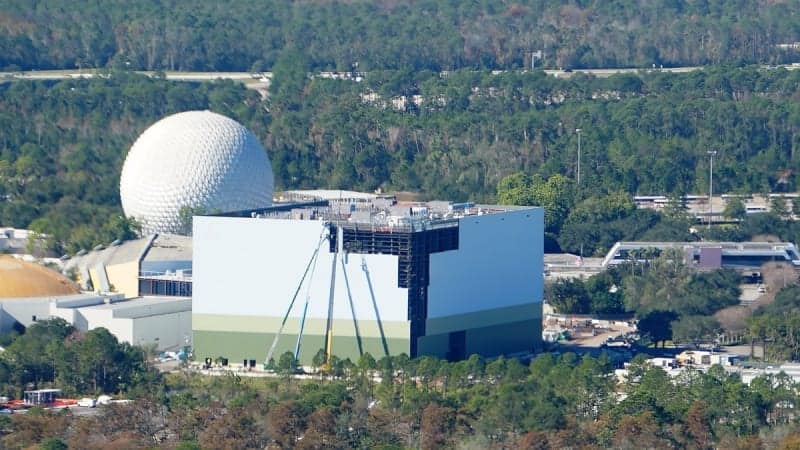 This shot is even more recent and just the last little section is left:

Next let’s look at the launch tunnel where guests will start their journey on the Guardians coaster.  We see the tunnel here in phases spanning only a couple of days apart: 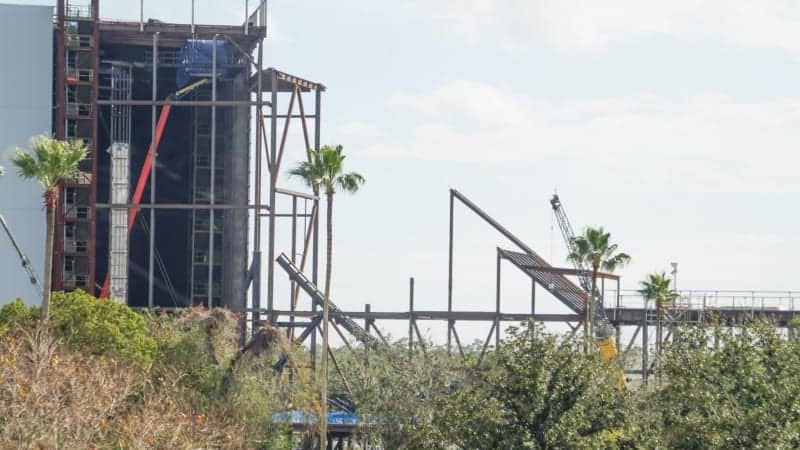 You can see the sharp incline the track makes as it propels the train up and into the show building.  On the right you see the start of the roof that is also being built on an incline and will eventually cover the tunnel: 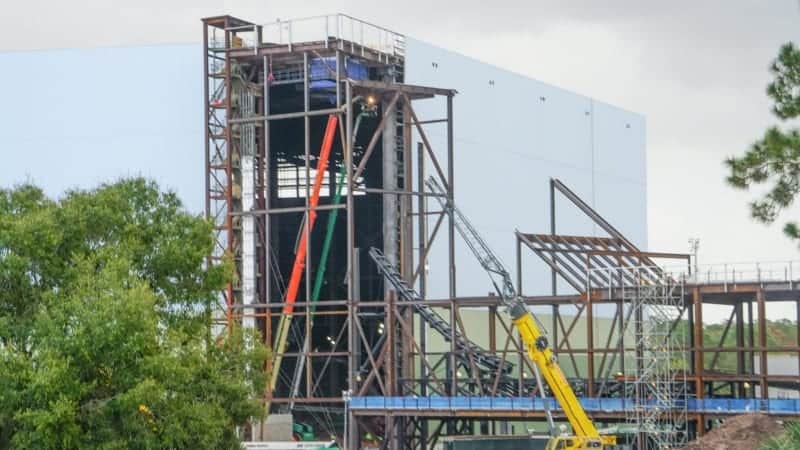 This next shot only a couple of days later you can see the steel frame has grown and is almost connected with the top: 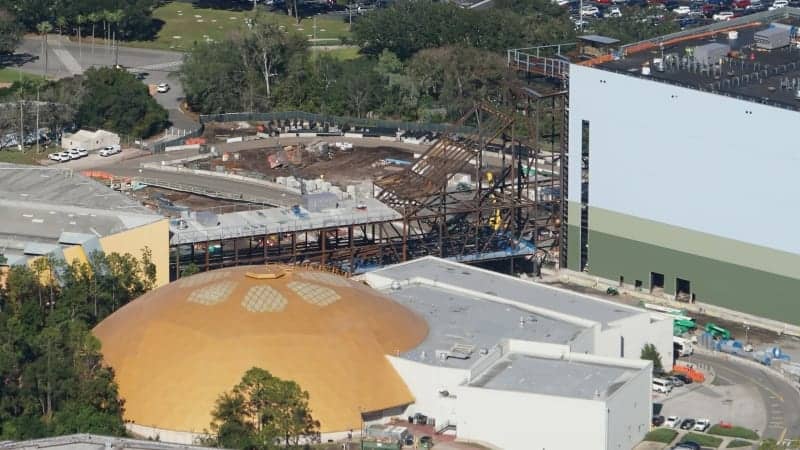 And lastly now the steel frame for the roof has reached the top and is connected: 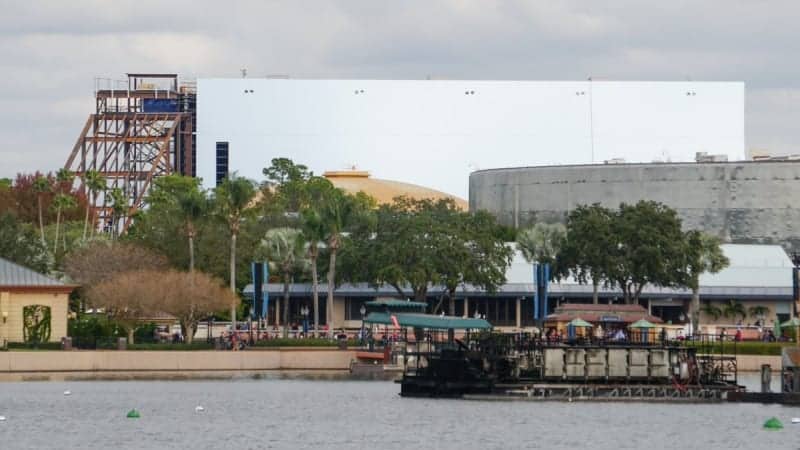 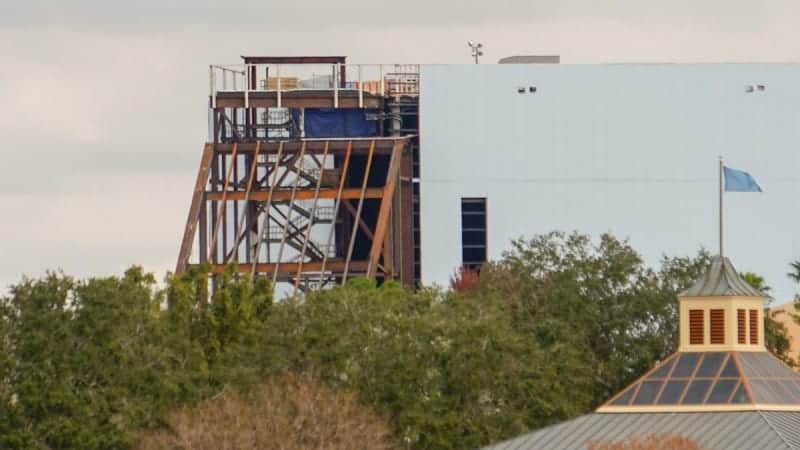 This is an even better look at the ascent from the launch tunnel into the show building: 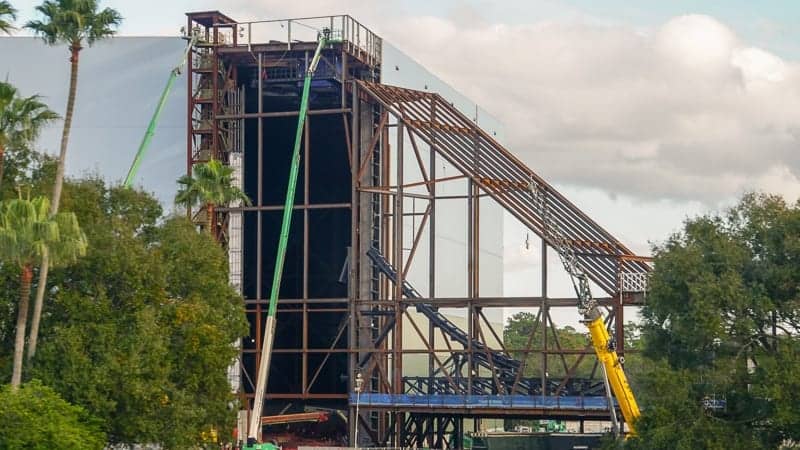 To get another perspective, you can see all this from the Epcot parking lot: 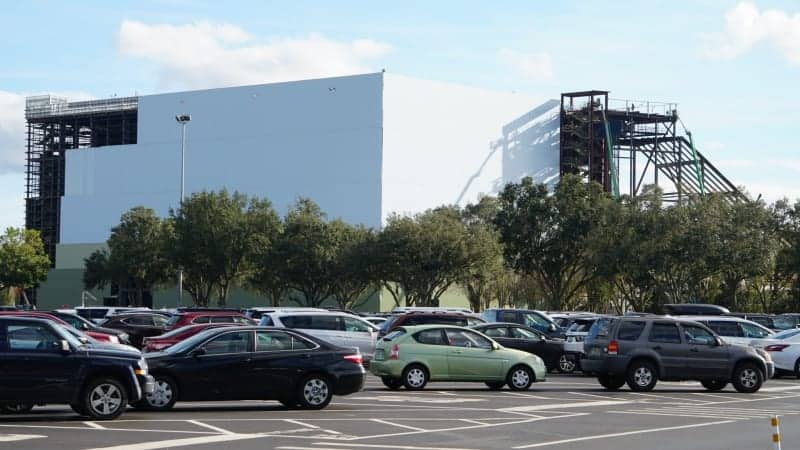 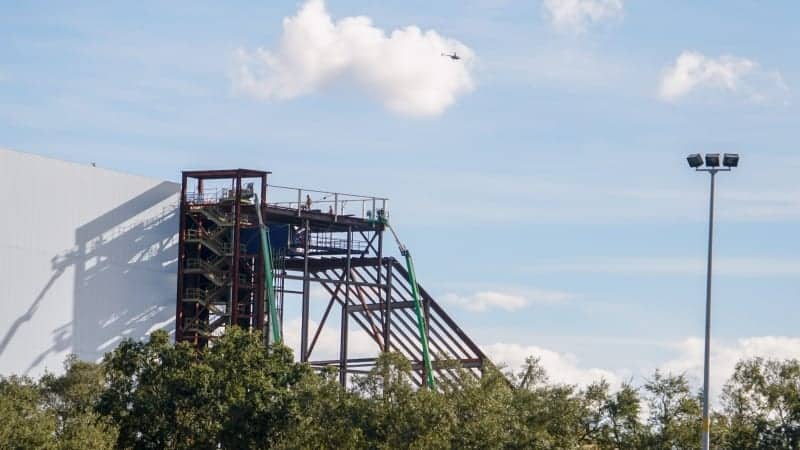 It certainly is massive and hard to wrap your mind around how big this attraction is really going to be!!  All that’s left is to cover it now and then cover the sides of the launch tunnel.

The Guardians of the Galaxy Roller Coaster is just one addition coming to Epcot and it’s going to be an exciting couple years for sure with projects like the Ratatouille attraction coming in Spring 2020, the New IllumiNations Fireworks Show Replacement,  a New Signature Dining Steak Restaurant coming to the Japan Pavilion and a Space-themed restaurant going in the Mission: SPACE pavilion.  There’s even talk about a Spaceship Earth renovation most likely in the works.

The Guardians of the Galaxy Roller Coaster is expected to open in early 2021.