Thanks as usual to @bioreconstruct over on Twitter for the amazing photos, especially the aerial ones which really give us a good look at the many projects currently underway at Walt Disney World!  Let’s see what’s new so far…

(Scroll down a bit for the latest photos)

The Disney Skyliner Gondola transportation system will have 5 stops during this first phase of the project: Epcot, Hollywood Studios, Disney Riviera Resort, Caribbean Beach Resort and Pop Century/Art of Animation Resorts, plus the Turn Station where guests will not get out, it will just turn the line towards Epcot.

Over at the Turn Station between Epcot and the Disney Riviera Resort you can see the glass paneling that’s been installed:

The glass panels take up about half of the length of the station.  It’s unsure why they are putting glass in at the Turn Station and metal in the other stations.  It’s cool anyways because it gives a cool look into the insides of the Disney Skyliner station:

Glass panels were even installed on the front of it:

That’s not to say glass is coming to the others.  Each Disney Skyliner station has a little different look and feel to it as you can see in the concept art from Disney below: 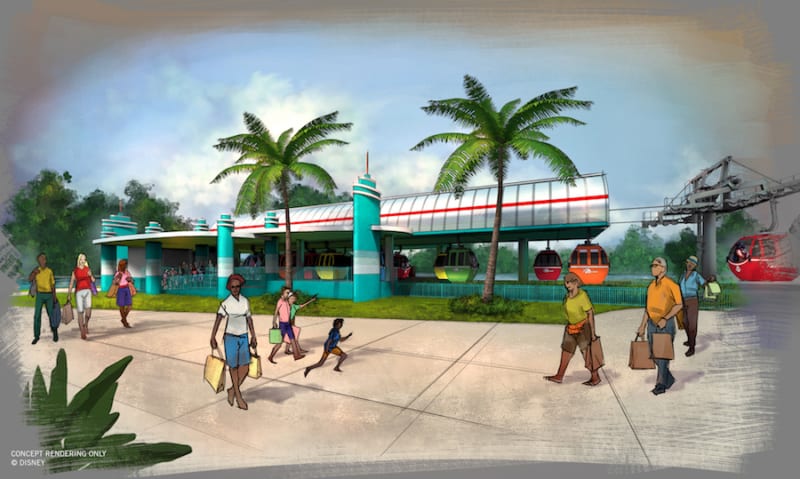 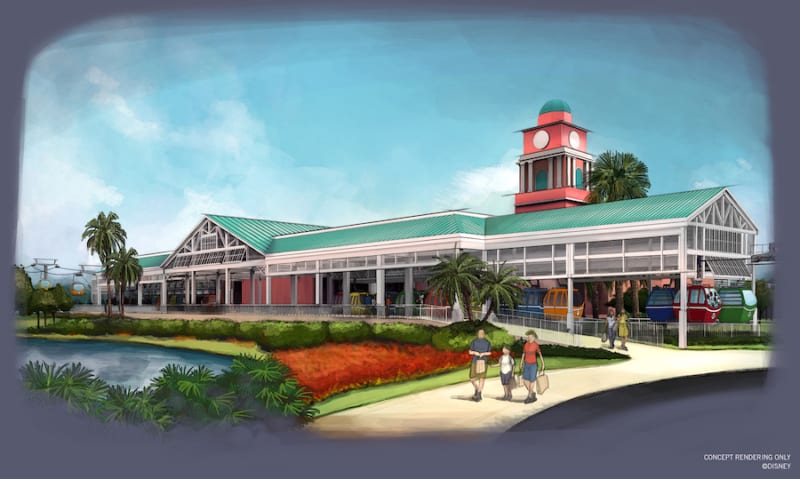 Of all the stations, the turn station looks the most like the Disney Skyliner station at the Epcot International Gateway, though that won’t have glass panels, it has metal ones. 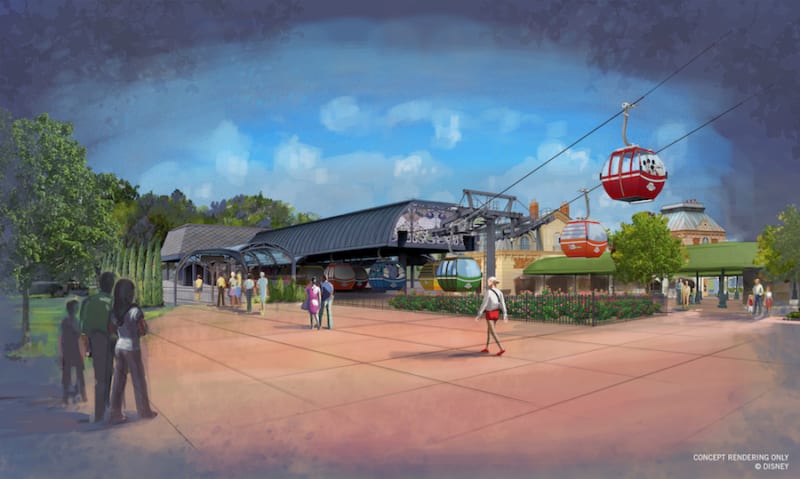 You can see the panels at the International gateway are not glass but metal:

We recently had a look at the newly painted flower artwork on the front of the Disney Skyliner station at the International Gateway too, so it’s really going to be a beautiful station when finished.

This is from the new bus loop at Hollywood Studios.  These supports will be used to hold up and string along the cable as it’s being connected from tower to tower:

How close are they?  If you look carefully, you can see a wire already hanging between these Disney Skyliner towers.

It’s not the cable which the gondola cars will hang from, but again it will be used in support to hang the main cable:

These wires will be used to string up the main cables for the Skyliner:

You can see they are not attached to the pulleys but hang above the gondola ride system:

A closer look at the cables shows there is one red and one greed wire to each side of the tower:

Here’s an aerial shot high above the Disney Skyliner station at Disney’s Hollywood Studios.  The gondola cars will be arriving from the left side of the photo once up and running, bringing guests in form the main station at the Caribbean Beach Resort:

A shot of the Hollywood Studios Parking Lot shows the row of Disney Skyliner towers leading to the station on the right.  The yellow arrows indicate the yellow support structures that will aid the hanging of the Skyliner cables:

You can see the grouping of yellow support structures here below:

Speaking of the Disney Skyliner station at the Caribbean Beach Resort, construction is is moving along nicely.  It’s not quite as far as the other stations, but it’s easily 3-4 times bigger than all the others with Disney Skyliner gondola cars coming in from three different directions.  This will be the main hub where people will get off and switch to another gondola taking them to their desired destination:

Up at the Epcot International Gateway we can see the construction progress on the Skyliner station there.  Looks like the ramp leading guests up/down to the cars has been installed on the left:

Lastly we take a look at the Disney Skyliner station shared by the Pop Century and Art of Animation Resorts:

Notice the station out in the middle of the water, flanked by walkways coming from each resort.  You can also see the row of Skyliner towers going through the lake heading to the Caribbean Beach station we just saw:

Sunday morning saw the first leg of Disney Skyliner cables installed at Disney’s Hollywood Studios.  A quick at the photos will show that there are cables now installed on the wheels of the Disney Skyliner towers:

As of a couple days ago there are only guiding cables on the top to help with the installation of the real cables along the wheels which will be used to hang the gondola cars from:

A closer look shows the cables through the wheels:

Again, the cables installed now are connecting the towers between Disney’s Hollywood Studios and the Caribbean Beach Resort.  As the weeks pass by we’ll see more cables start to connect the other cables throughout the Disney Skyliner network.  Now let’s look at the Disney Skyliner Station at the Pop Century and Art of Animation Resorts:

Here are the Disney Skyliner towers in Hourglass Lake.  There’s a vast difference in height between these and the ones on land.  This means guests will be quite low to the water at the start of their journey:

You can see the dramatic difference in height once the tower get going on land towards the Caribbean Beach station:

The Disney Skyliner doesn’t have an opening date yet, but as things are going we are expecting a Mid-2019 opening with things fully in place well before Star Wars Galaxy’s Edge opens up at the end of 2019.  Stay tuned for more updates and info…. 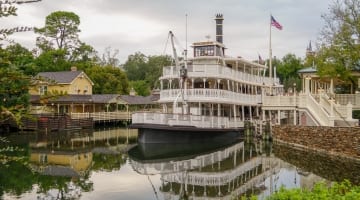 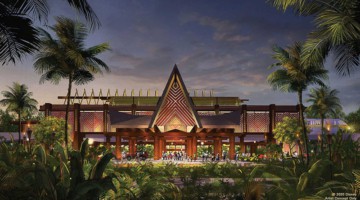 Disney World Transportation After Reopening | What to Know