UPDATED – 11/28/18: This is a Guardians of the Galaxy Roller Coaster in Epcot Construction Update for November 2018.   Tons of new stuff  to share with you from the various construction sites around the Walt Disney World Resort, and lots of movement especially has been seen on the Guardians of the Galaxy Roller Coaster.  Most noticeably has been the rise of the walls around the gravity building which will hold the track eventually, a ramp being added to the attraction’s launch tunnel and the first pieces of the track have now been installed too!

Thanks especially to @Bioreconstruct who always gets amazing aerial shots of the construction projects around Walt Disney World, check him out on Twitter!  Ok, let’s see how far the Guardians of the Galaxy coaster has made it so far…

Here we can see a nice aerial shot over Epcot.  There’s the Guardians of the Galaxy coaster to the right of Spaceship Earth in the center.  Let’s hope that Disney painting the Guardians coaster building does something to make it blend into its surroundings because that sticks out like a sore thumb!  It’s HUGE! 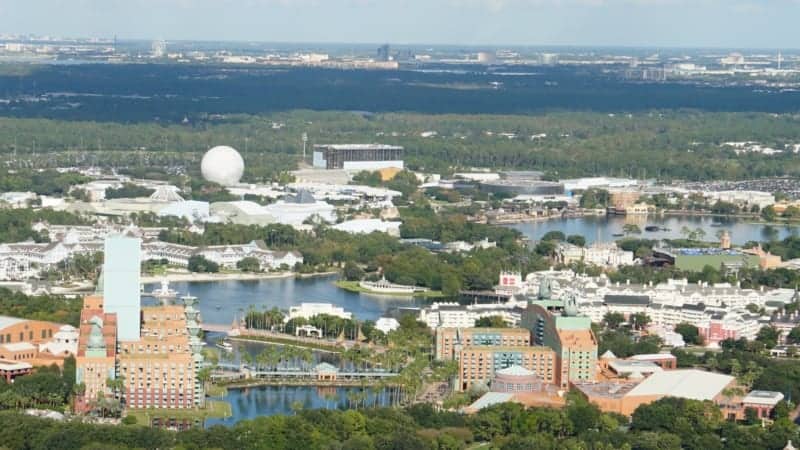 Before we take a look a the attraction building (Gravity building as it’s being called) let’s take quick ride on the monorail to see the old Universe of Energy building which will serve as the attraction’s queue: 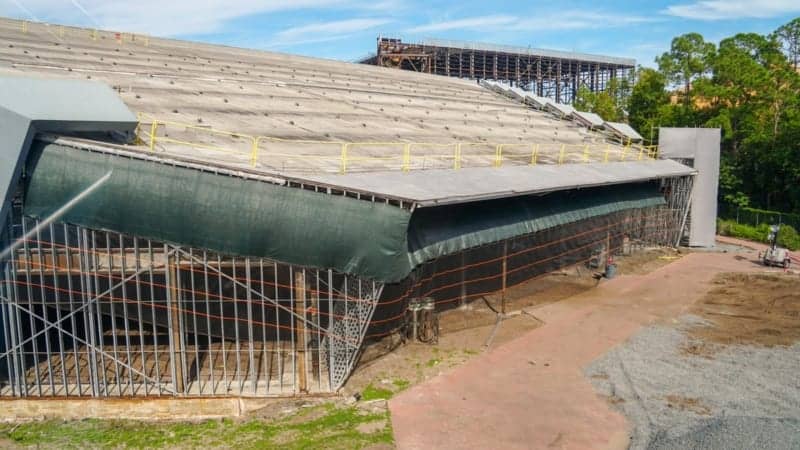 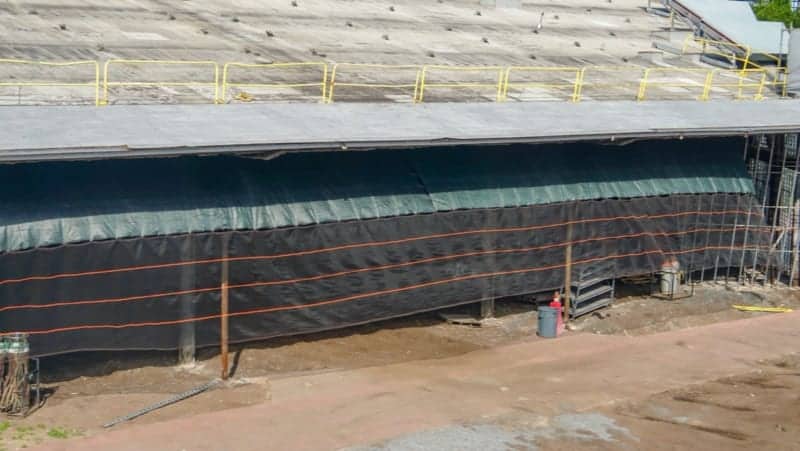 All the solar panels have been taken down from the roof, though I’m told that new ones will eventually be put on again: 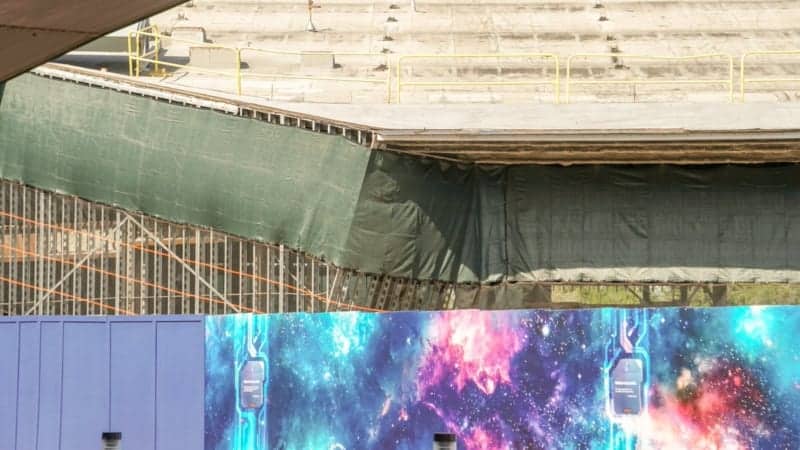 From a distance we can see the North wall of the Gravity building is being covered up from the outside.  The East wall is also rising quite nicely too.  You may notice the walls being painted in three colors so far.  That is to help the Guardians of the Galaxy attraction building to blend in with its surroundings, darker green for the nearby trees and eventually a lighter color imitating the sky.  That will probably go all the way up to the top: 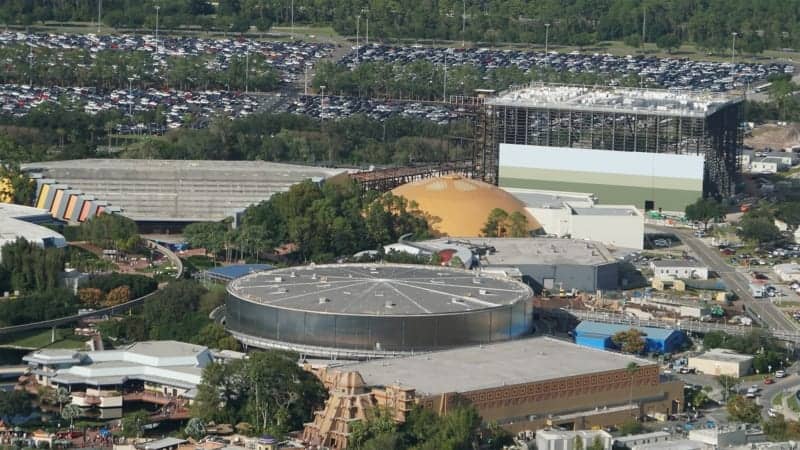 So though the Guardians coaster building is getting closed in, one question remains: Why are they covering all the walls BEFORE they install the coaster track?  How are they going to get the track inside?  It may seem backwards and it’s actually the opposite of how Disney usually builds its roller coasters, but supposedly the track design was running behind and it only arrived in September 2018.  That meant if Disney waited to start installing the track in September and then after start the outside walls, it would have taken many more months to build the attraction.  This way Disney saved valuable time which means it will open earlier than it otherwise would have.

How is Disney going to get the pieces in?  There are still doors there at the bottom, and though they may not seem big, you can easily drive a car though them, meaning a rollercoaster track will also fit no problem. 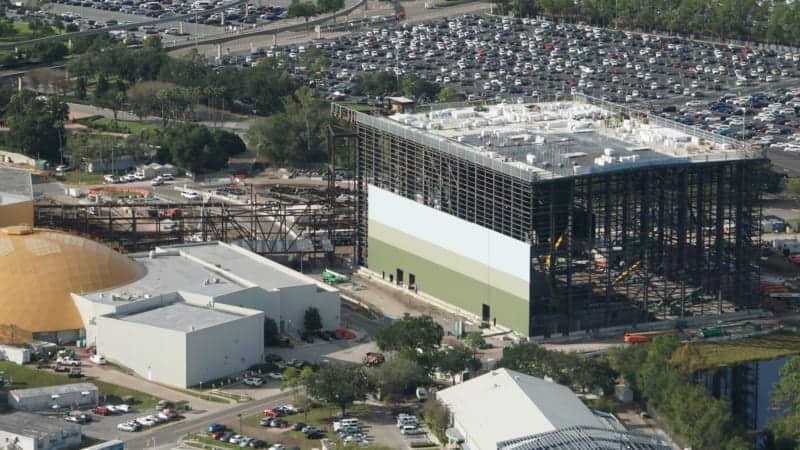 A close-up of the roof shows there are lots of workers up there installing the complicated heating and cooling system: 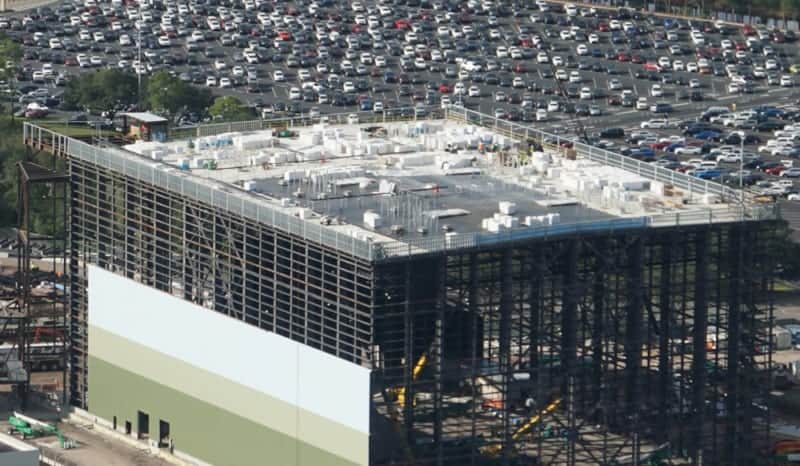 From the ground level across World Showcase Lagoon: 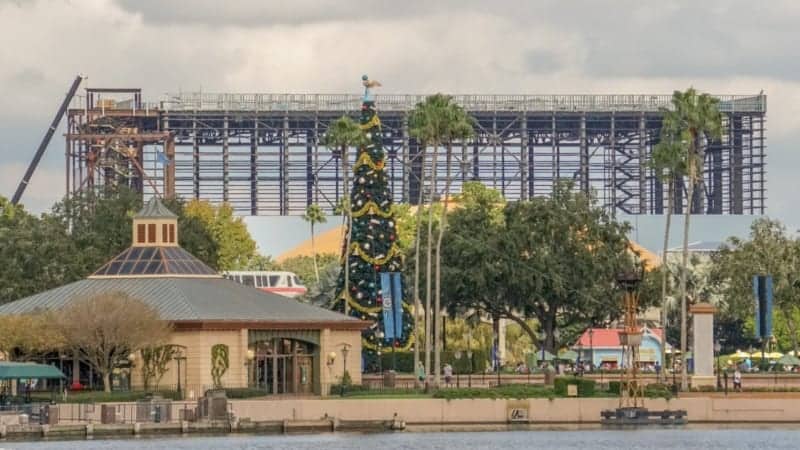 One last one shows the East wall from the Epcot parking lot.  On this side interestingly enough it doesn’t see like they are painting this side like the one visible inside the park: 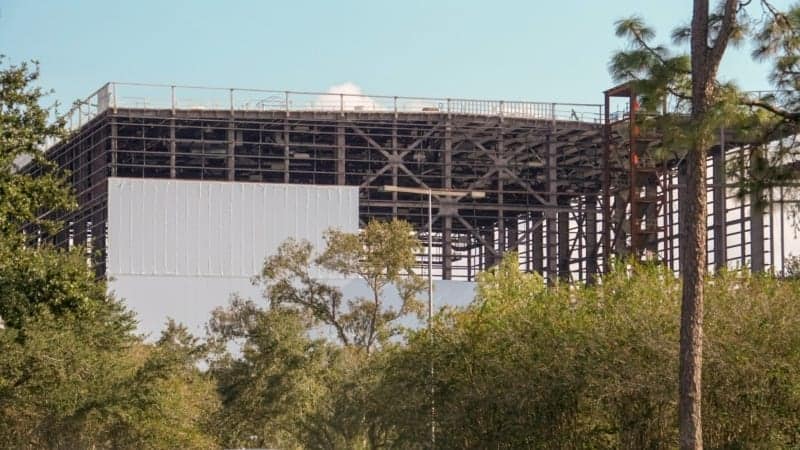 While riding through Epcot on the monorail you can get an amazing view of the Guardians of the Galaxy gravity building on the left in comparison with Spaceship Earth on the right side: 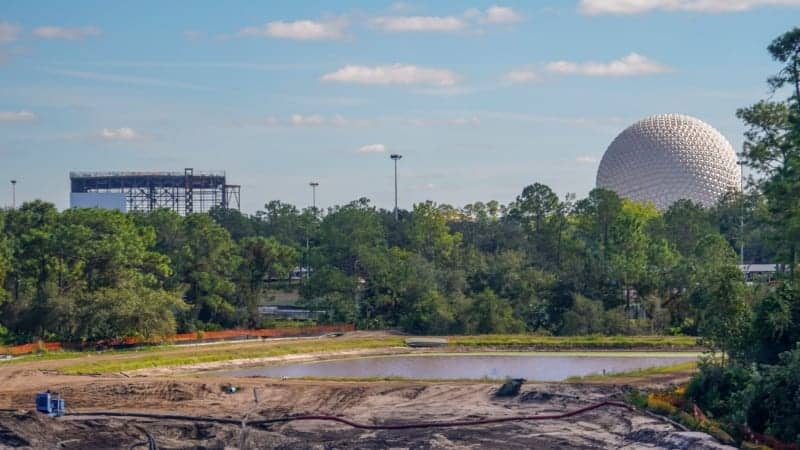 A look at the front plaza where the entrance to Guardians of the Galaxy roller coaster will be shows the whole front area has been leveled and gravel placed over where the fountain once was.  If looks like some big work is starting to get started with thousands of tubes bundled up outside the building: 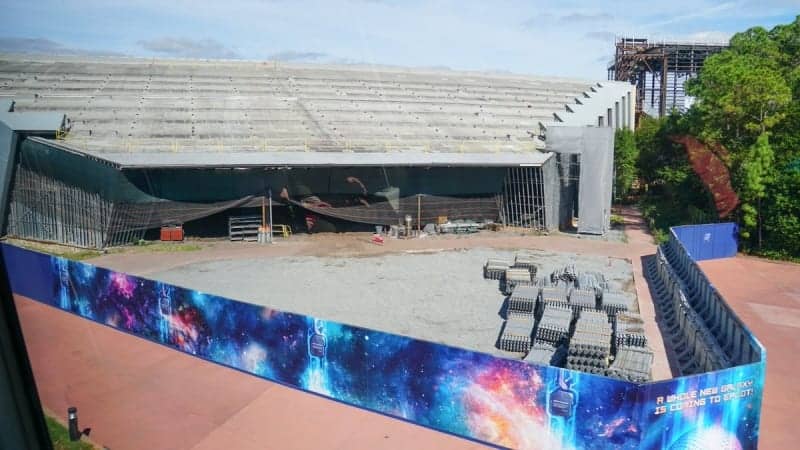 Most likely these will house the electrical conduit running under the ground and giving power to the attraction queue and pre-attraction area: 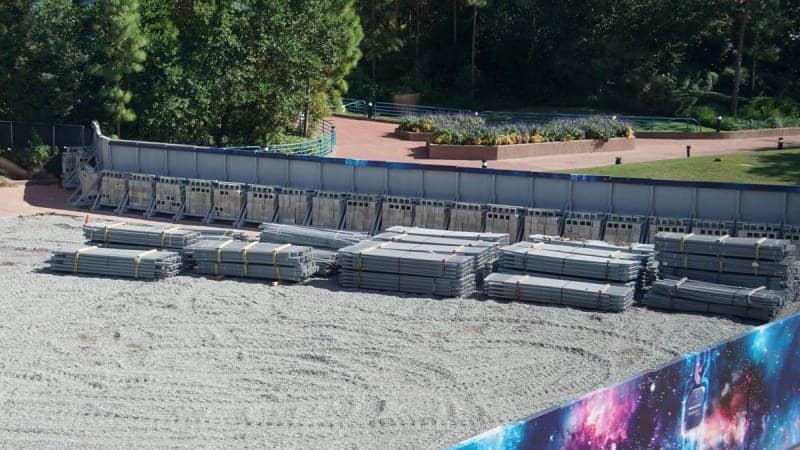 Looking over at the Guardians of the Galaxy coaster Gravity building where the attraction itself will run, we can see the wall panels are more than half way up on at least two of the sides: 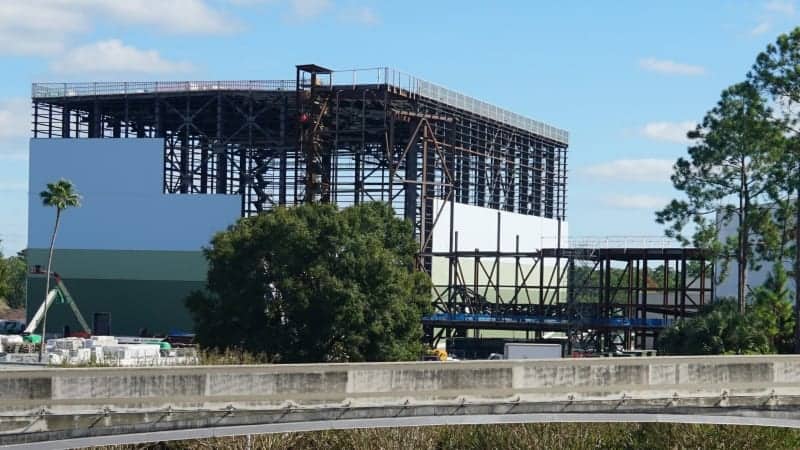 One of the more interesting developments with the project though is the launch tunnel which will bring guests from the loading area into the attraction show building.  It now looks like the start of a ramp is visible towards the end of the tunnel, which could indicate the roller coaster will shoot upwards at this point towards the top of the building and the attraction will start from there and descend throughout the rest of the attraction: 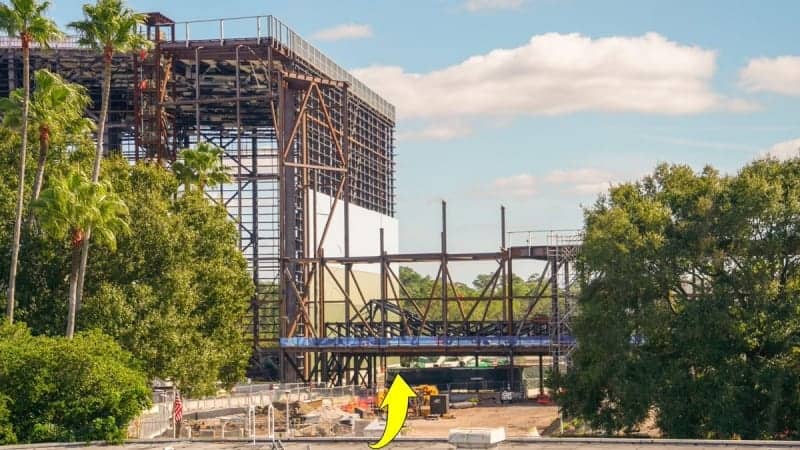 Here’s a closeup of the ramp at the end of the launch tunnel: 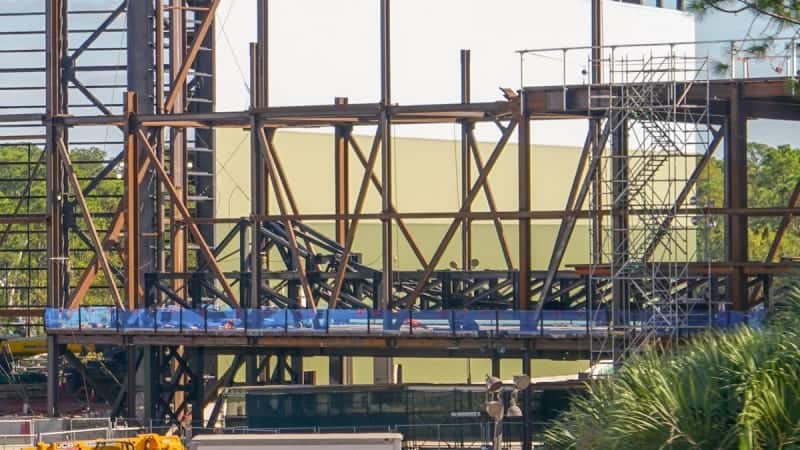 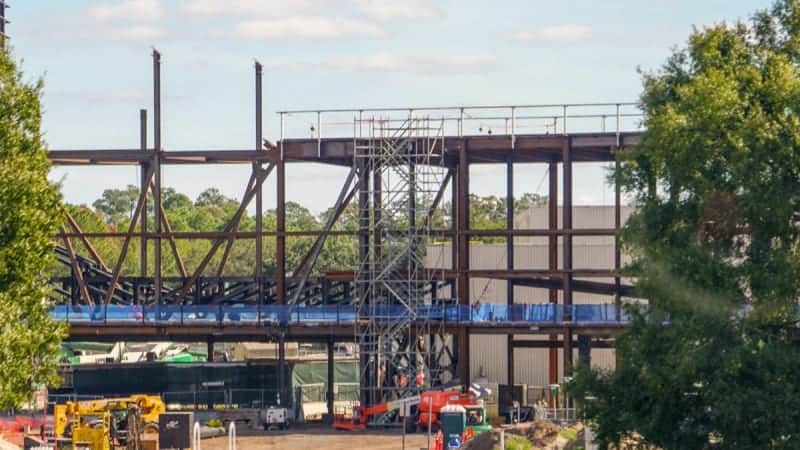 This reminds us a lot of the Rock ‘n’ Roller Coaster with the whole launch tunnel and all, only we have been told the Guardians of the Galaxy coaster won’t include a loop.  So if the train does get shot up this ramp at the end of the tunnel it will just go up and not put you through a loop.

Today is a monumental step in the Guardians of the Galaxy Roller Coaster as the first pieces of track have been installed on the attraction.  Over in the distance you can see the Gravity building: 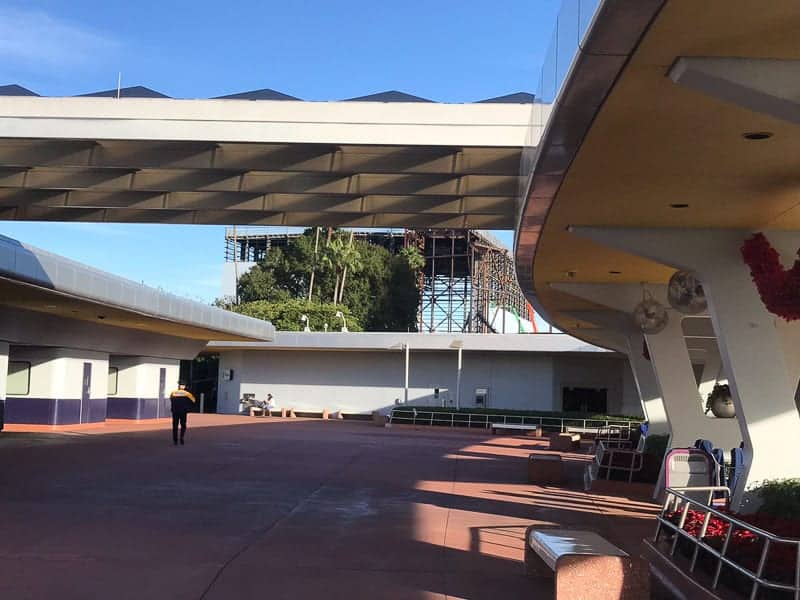 A closer look however reveals the track is coming up from the launch tunnel and aiming straight up into the attraction building! 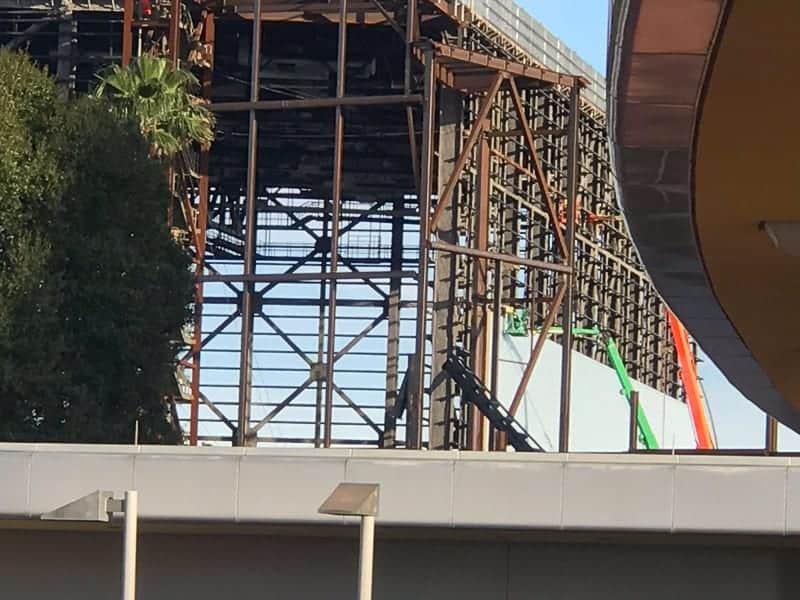 This is exactly like we were explaining a couple days ago and this confirms it that the vehicle trains will be shot through the launch tunnel and then up a super steep incline to the top of the show building where it will then make its descent through the whole attraction.  Again from all account there won’t be a loop, but we should get a better view of the attraction path in a few more days as more pieces continue going up. 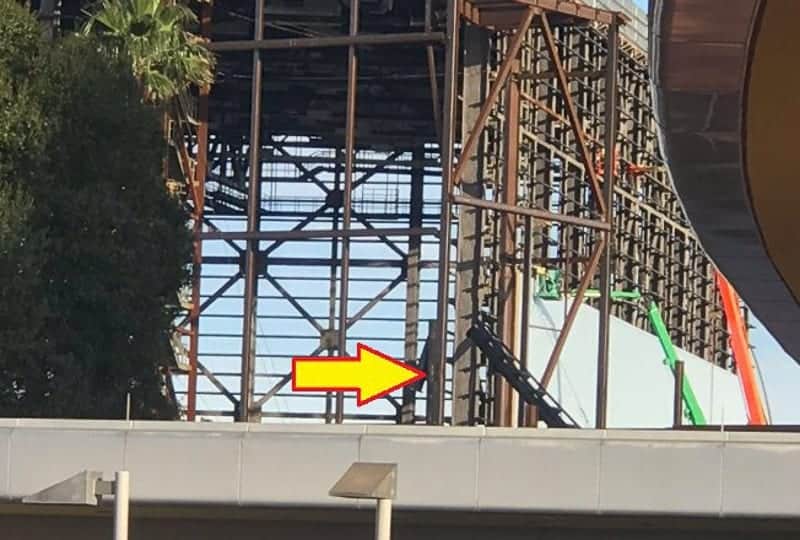 Looks awesome and really gets me pumped!! ?.   Stay tuned for more soon…

If you haven’t seen them yet, Disney revealed some concept art for the GotG coaster ride vehicles, and they look pretty awesome!

The Guardians of the Galaxy Roller Coaster is just one addition coming to Epcot and it’s going to be an exciting couple years for sure with projects like the Ratatouille attraction coming in Spring 2020, the New IllumiNations Fireworks Show Replacement,  a New Signature Dining Steak Restaurant coming to the Japan Pavilion and a Space-themed restaurant going in the Mission: SPACE pavilion.  There’s even talk about a Spaceship Earth renovation most likely in the works.

The Guardians of the Galaxy Roller Coaster is expected to open in early 2021.

It's awesome photos and I can't wait to ride it for the 50th Birthday for Walt Disney World!