UPDATED 10/22/18: This is a Guardians of the Galaxy Roller Coaster in Epcot Construction Update for October 2018.   There have been lots of changes around the Guardians of the Galaxy Roller Coaster since the last time we checked in and now the solar panels from the top of the old Universe of Energy building have been taken down, plus lots of work has been done to the launch tunnel which will connect the old Universe of Energy Building where the queue and loading area will be for the Guardians coaster, to the actual attraction show building.  And lastly we’ll look at the first wall panels installed on the outside of the gravity building.

This coincides with our last construction update where we saw demolition going on to the front of the Universe of Energy building where the Guardians of the Galaxy roller coaster queue will start.  The fountain, and the whole front of the building were torn out with some major work going on inside.

Thanks again to @Bioreconstruct who always takes the best shots of the construction going on around Walt Disney World property, we can see the latest on the Guardians of the Galaxy coaster project.  Let’s dive in and see what’s new this time…

(Scroll down a bit for the latest photos)

This is a gorgeous aerial shot of the Guardians of the Galaxy coaster show building rising above…well just about everything in Central Florida, let alone Epcot!  Ok that’s exaggerating just a tad, but you can see even at this angle it looks bigger than Spaceship Earth!  Now GotG Coaster building is about 120 feet and Spaceship Earth 180, so it’s just a trick because of the angle, but still you get the point that this is huge! 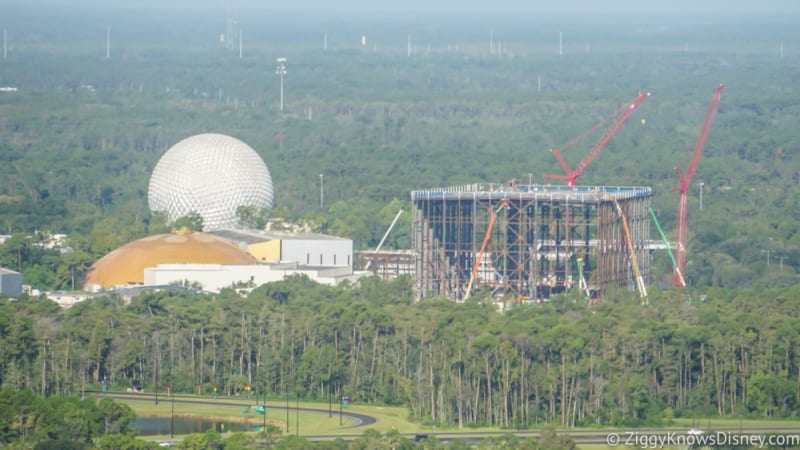 Here’s a quick shot from the side of the coaster building: 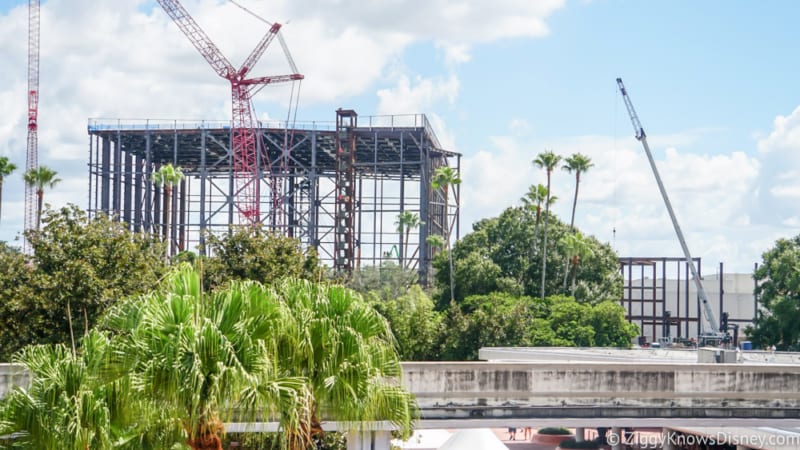 Much like Rock ‘n’ Roller Coaster, you can even see the structure being built on right which will connect the old Universe of Energy building which will house the queue, with the main attraction building on the left.  Guests will load into the trains in a building to the right, then shoot into the show building through that tunnel: 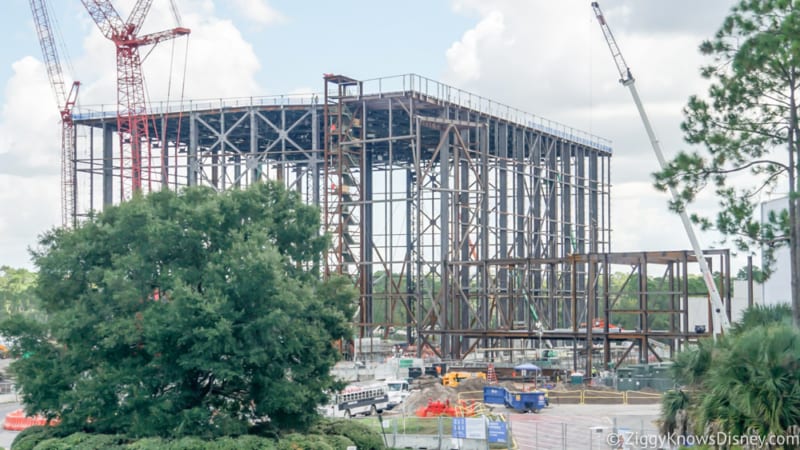 So there’s a lot of speculation about what the outside of the attraction building is going to look like, but from this photo it doesn’t seem like it’s going to be totally flat and square.  You can see steel columns being built to the right on the outside of the building, and they definitely are angled.  Now is that going to be the only one or will that pattern continue around the sides: 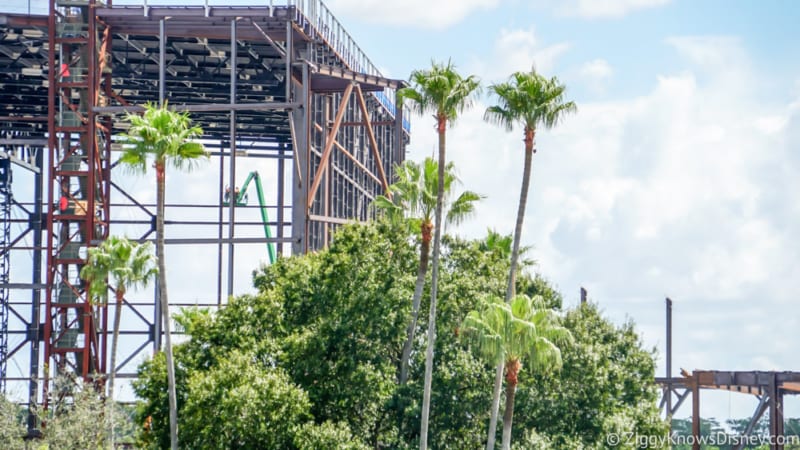 It could be totally cosmetic to add theming to the building which would be much more interesting that just a boring plain side like Test Track has.  But then again it could lead to something really cool with the launch of the trains too.  (more on that later) 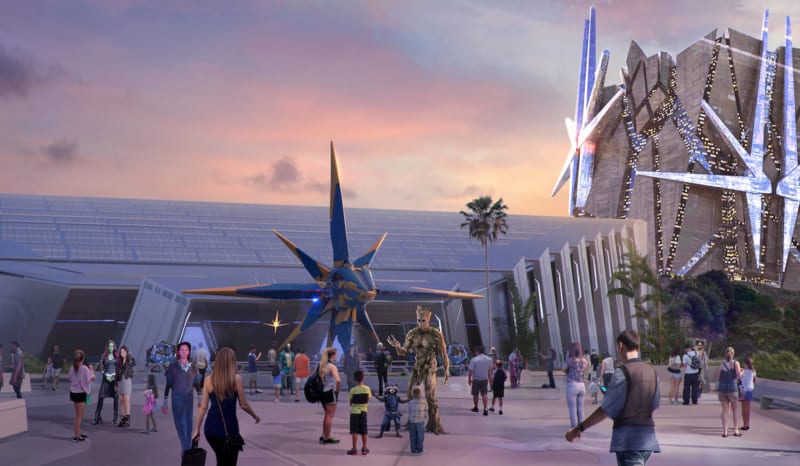 Either way it looks like most of the steel supports are up, and with the roof close to finished, we should start to see it being closed up soon.

Here you can see the iconic solar panels which once covered the entire roof of this building have been torn off: 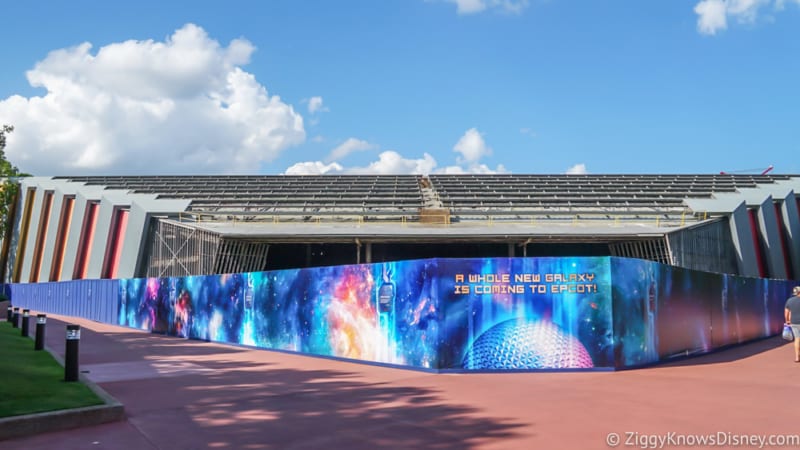 The thing is, it clearly looks like from the concept art above for the Guardians Roller Coaster, that the roof is still covered in solar panels.  Could it be that those were too old and needed replacing?  My guess is that these panels will get an upgrade to newer and more engird efficient ones.  We’ll have to wait and see, until Disney sends out some more concept art, we’ll have to assume the final product will have solar panels still.

Here are some more angles for you: 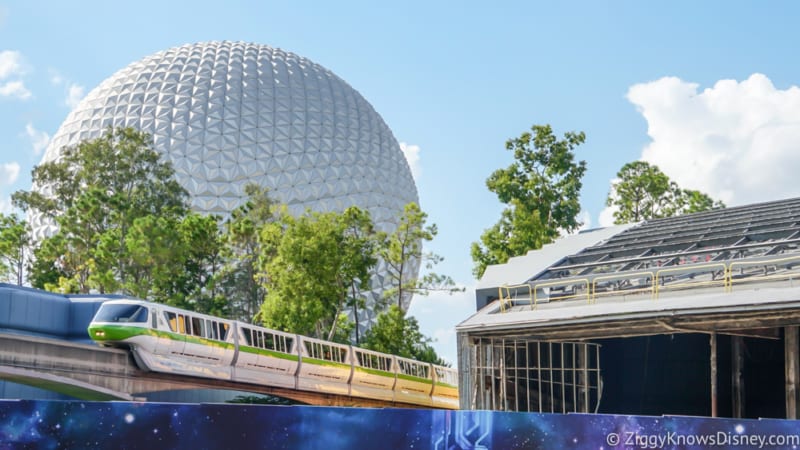 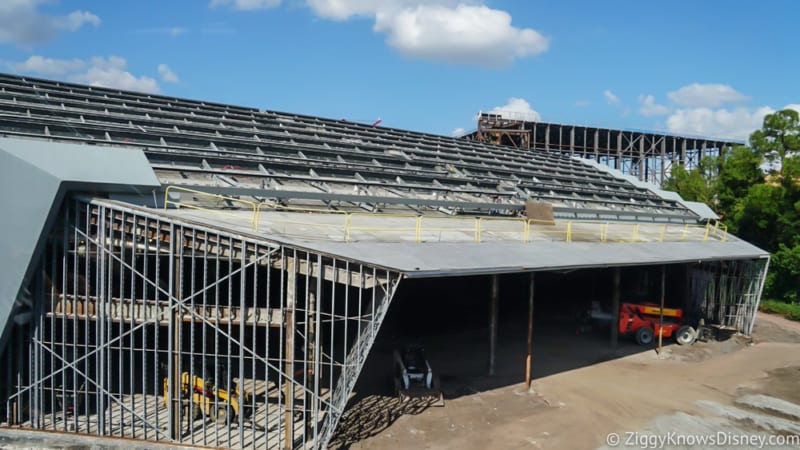 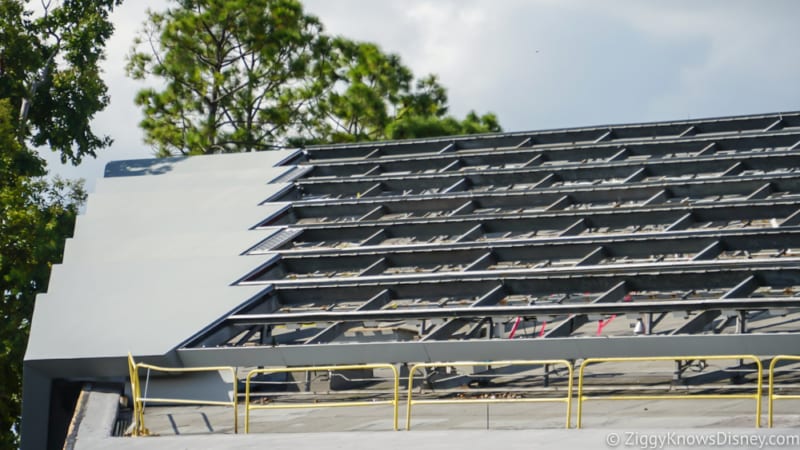 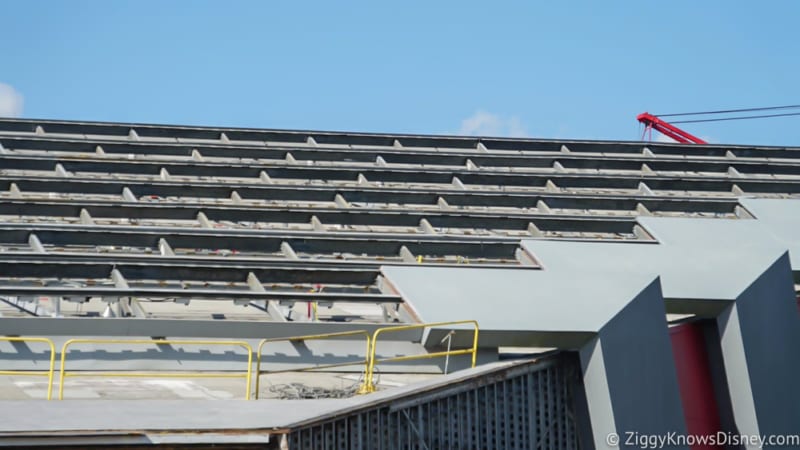 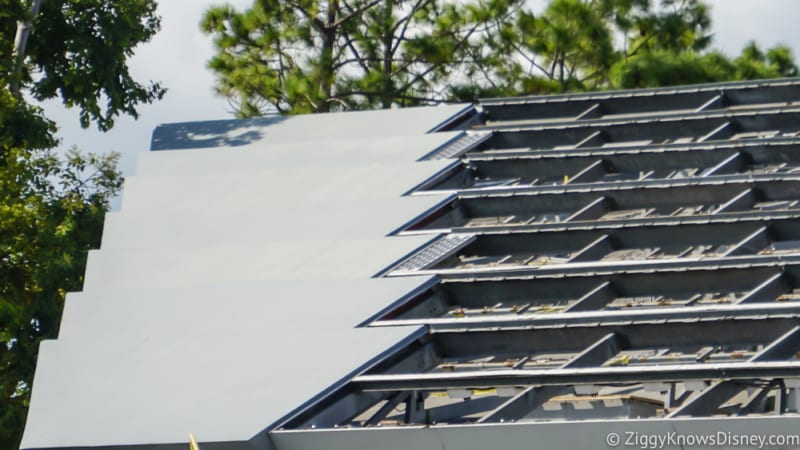 You can see the whole fountain has been completely torn out from the ground as well and is being leveled over: 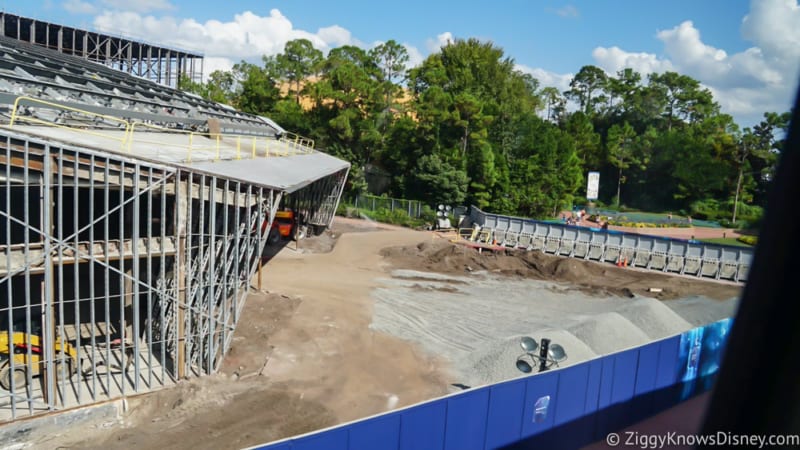 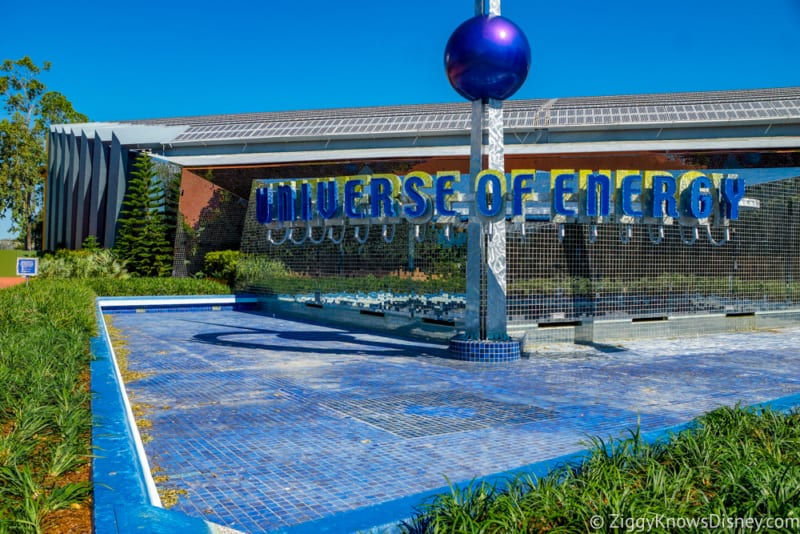 Here you can get a nice overhead aerial shot of the Universe of Energy building with the arrow pointing at where the fountain used to be:

You can tell construction is moving around the clock on the Guardians of the Galaxy coaster because now you’ll see lights on almost every night.  Working non-stop to get this thing up and built! 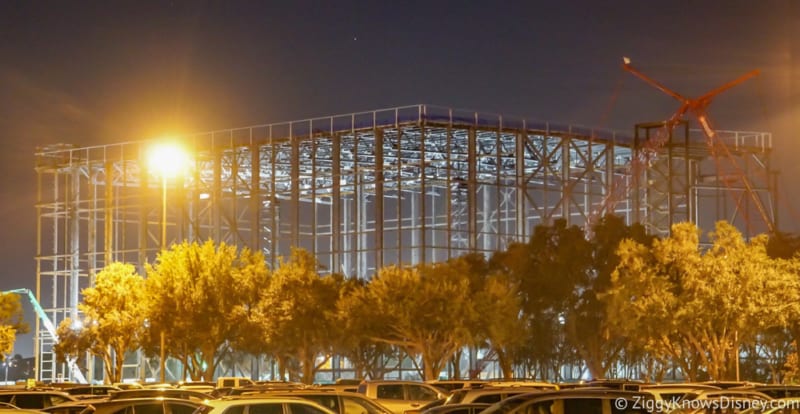 Here you can see the solar panels are still down on the old Universe of Energy building and nothing has been put up in their place yet:

Current shot from the front of the building:

This is the last stubborn solar panel still up there:

Earlier we talked about the theming on the side of the show building and what it might look like.  Now as you get a better look at the building, you can see more framing going up on the sides of the walls which will hold the exterior panels:

It sure looks like they will be holding some sort of theming:

Lastly, and one of the coolest things we saw in this latest construction update for the Guardians of the Galaxy coaster is the launch tunnel that will go from the old Universe of Energy building where the queue and the loading area will be, all the way to the main attraction show building.  It looks very similar to the way Rock n’ Roller Coaster is built which makes me think of two possibilities for the beginning of the attraction which I’ll describe in a minute…

In the top two arrows you see another angle from the launch tunnel and how it connects to the main building and the second arrow there looks like part of the connecting structure attached to the building, but could also be some kind of theming on the outside of the wall:

The most interesting part of these photos is this one, which shows what appears to be a ramp being built inside the launch tunnel, presumably to shoot the train cars at an upward trajectory for the start of the ride.  So this brings me to my idea…

Yeah the Guardians of the Galaxy Roller Coaster might just have a standard launch like Rock ‘n’ Roller Coaster, but seeing as this coaster is supposed to be revolutionary, I have a better idea.

What if that tunnel connecting to the show building was full of screens and projections, special effects etc, to set you up for the ride, and then that strange looking structure that kind of jets off the main show building in a weird triangle-like shape, isn’t there for theming, but is an elevator of sorts that brings the trains up to the top of the show building before letting you go…

So hear me out on why this sounds possible.  First, Disney has said it will be full of special effects to see, and the tunnel is a really long space that can have the trains moving slowly along while building up the story for you.  Then there would be a platform in that tall structure lifting you up to the top, all the while with special effects and screens all around you.  The structure itself is long enough to hold a train, look at the length in comparison to the construction equipment down on the ground next to it.  This after all would be good use of the rotating cars for the Guardians of the Galaxy coaster that Disney just developed a patent for.

Because otherwise, of what use is that structure?  And since we know there won’t be any inversions, it’s a whole lot of wasted space if you aren’t putting a loop there right at the beginning at the end of the launch.  This way the trains get lifted up, and start their decent from the top already.  The lift would have to be lifted off the ground in a way that the returning trains could either pass underneath it or pass by on the way back to the unloading area.

Now, I ‘m not an engineer by any means, and don’t know how or if you could feasibly build such a ride system, but that’s my idea/theory for now.  I don’t have any insider info about it, it’s just my own idea, but it just seems like a really strange setup the way it’s being built and there will for sure be something unconventional about it when it’s all done.

Yesterday the first wall panels went up on the outside of the Guardians of the Galaxy Roller Coaster.  In the picture you can see a few of them already installed at the base of the gravity building on the left:

For now the color is green and unless they are installing something else over the top of the wall, it will probably stay that color:

The yellow arrow here shows the outside of the already installed panels:

After we looked at the launch tunnel going from the loading area to the gravity building, now we see two holes cut into the bottom of the tunnel.  Supports for the track??

The Guardians of the Galaxy Roller Coaster is just one addition coming to Epcot as part of a multi-phase expansion and renovation.  We recently learned about the New IllumiNations Fireworks Show Replacement coming next Summer, as well as Ratatouille attraction coming in Spring 2020, and a Spaceship Earth renovation most likely in the works.  Disney also has a New Signature Dining Steak Restaurant coming to the Japan Pavilion and a Space-themed restaurant going in the Mission: SPACE pavilion.

It’s going to be an exciting couple years in Epcot for sure!  The Guardians of the Galaxy Roller Coaster is expected to open in early 2021. 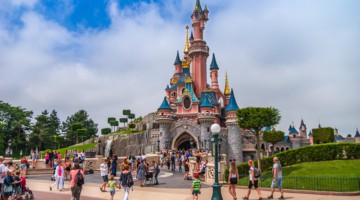 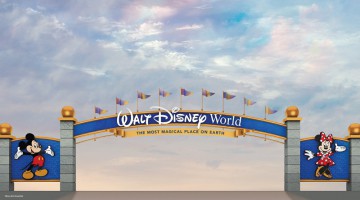