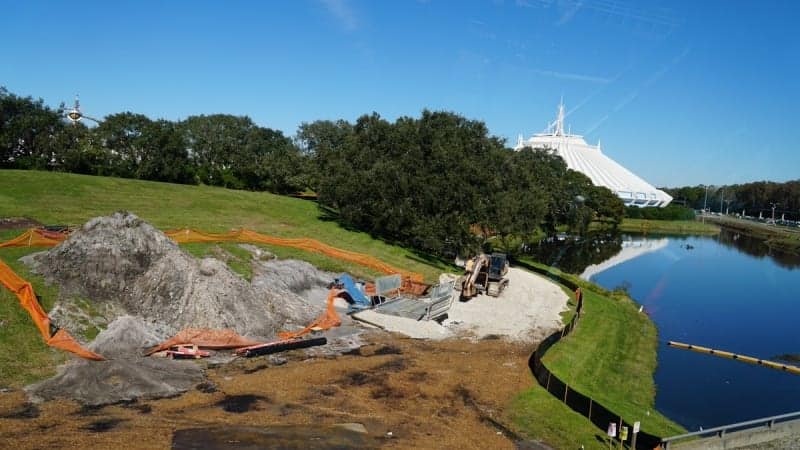 This is a Tron Roller Coaster Construction Update for December 2018 in Disney’s Magic Kingdom.  Today we are going to see where the Walt Disney World Railroad tracks have been torn up to make way for the Tron coaster.

The last time we took a look at the site we saw a detailed plan of the drainage system being up into place which explained why the Tron coaster is taking so long to get going and when we can start to see the project go vertical.  Since then we’ve seen the Walt Disney World Railroad close down since the Tron coaster in Magic Kingdom is essentially being built over the railroad in Tomorrowland.  Things should start going vertical soon…

Thanks as usual to @Bioreconstruct who always takes such awesome photos of the construction projects in Walt Disney World, especially the ones from the air!  Let’s dive in and see what’s new this time…

Signs are up all around the Magic Kingdom for the Walt Disney World Railroad closure: 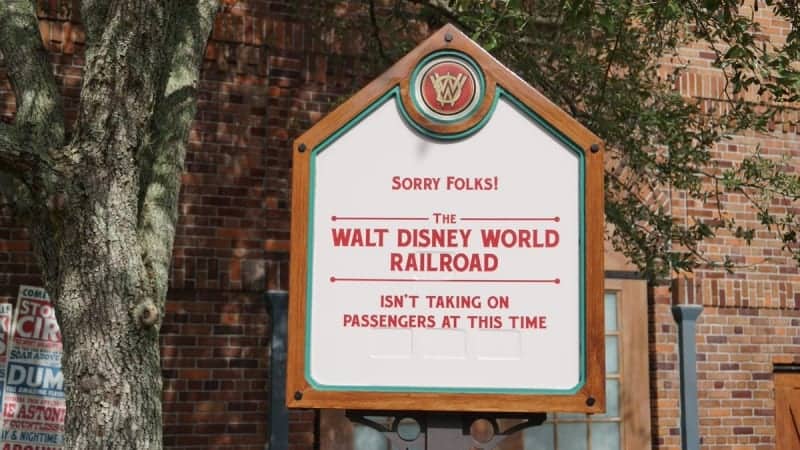 Let’s get closer to Space Mountain for a better look.  Out in front there is a life preserver station along the train embankment on the southeast corner: 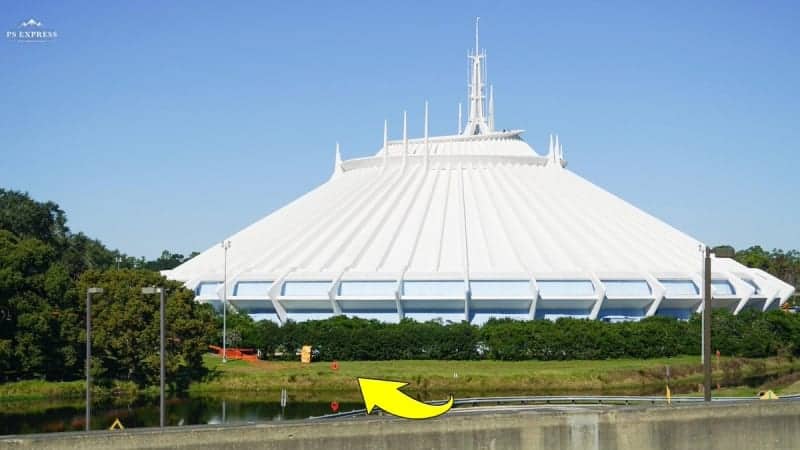 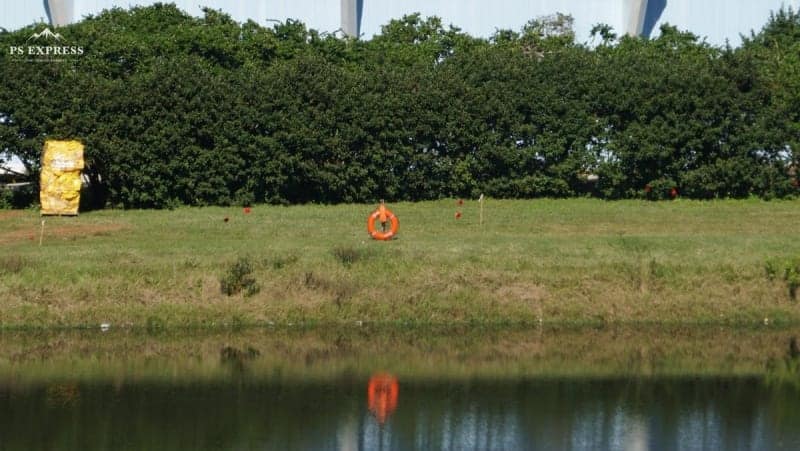 From the PeopleMover we get closer to Space Mountain and you can see an train embankment surrounded by an orange construction fence: 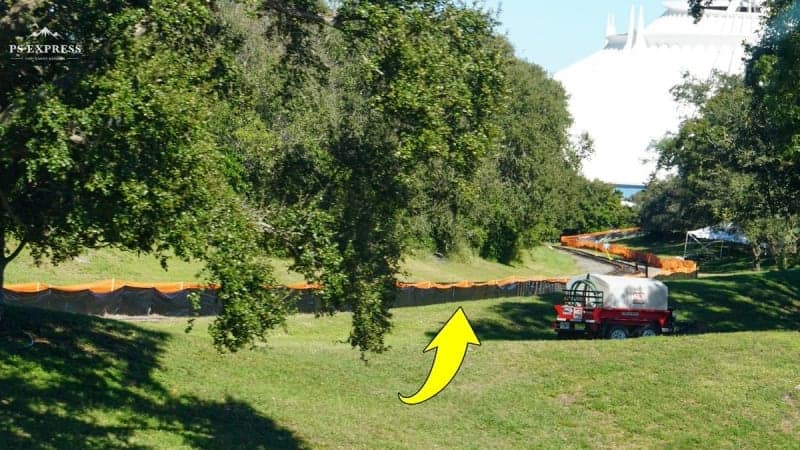 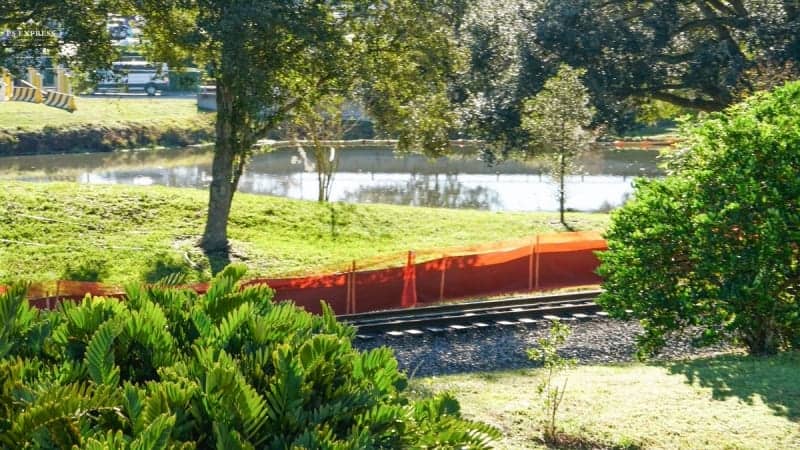 You can see the railroad tracks going across the future site for the TRON coaster, and where they have already started to get pulled up: 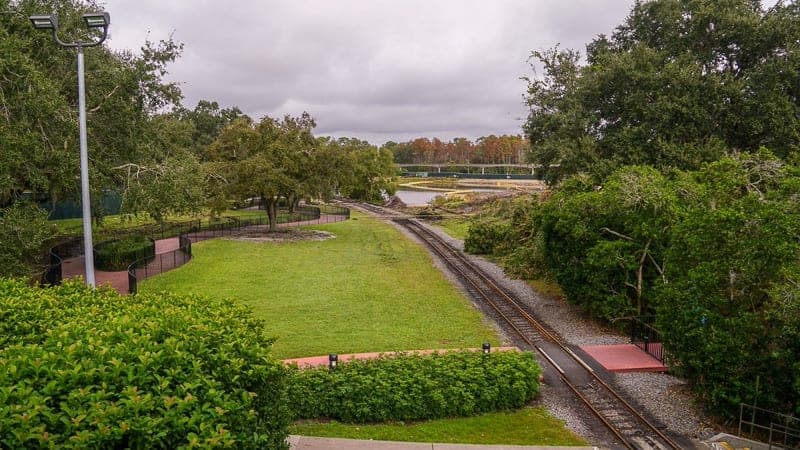 This is necessary because the TRON coaster will be suspended over the top of the tracks when done, and the Walt Disney World Railroad will pass underneath. 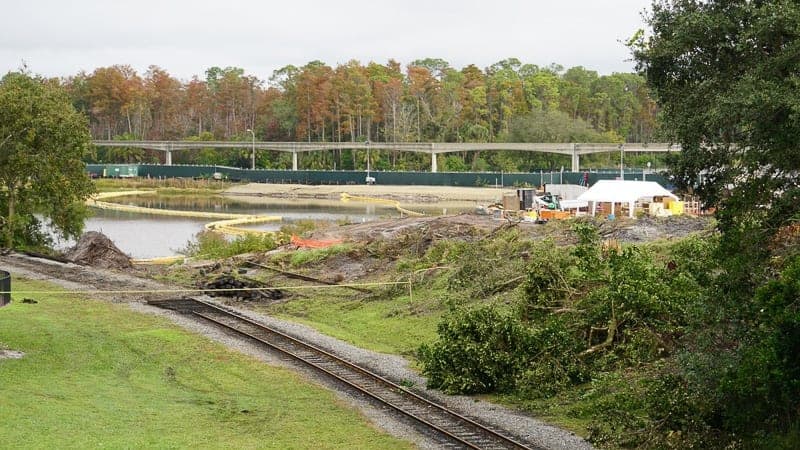 Notice the train in the TRON concept art below passing on the left side:

To show you a difference from how the area was before, here is the area between Storybook Circus and Tomorrowland a few weeks ago: 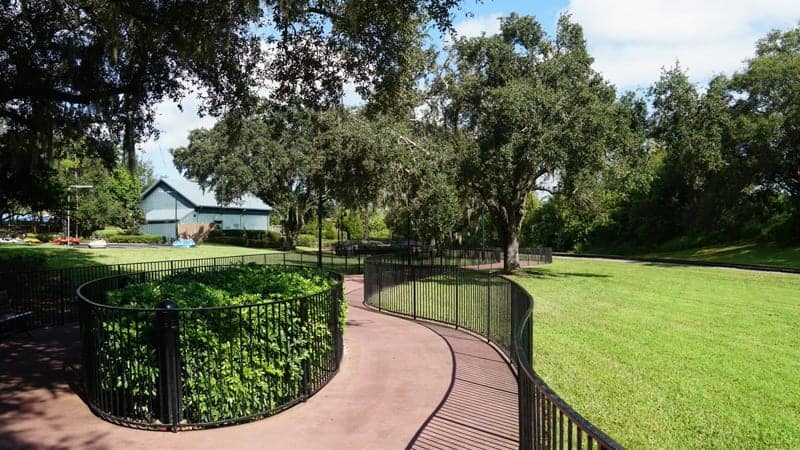 Here is that area today: 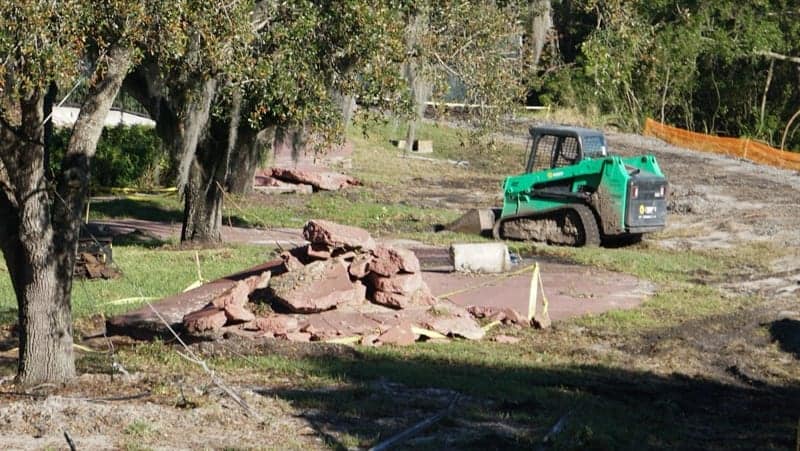 The fence ripped up and turned into scraps: 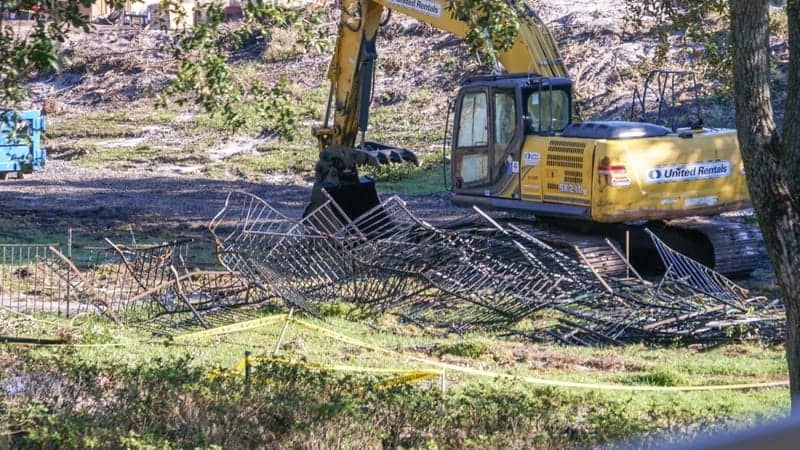 To get a really good view of the construction site you can go up into the queue for Barnstormer and see over the fence: 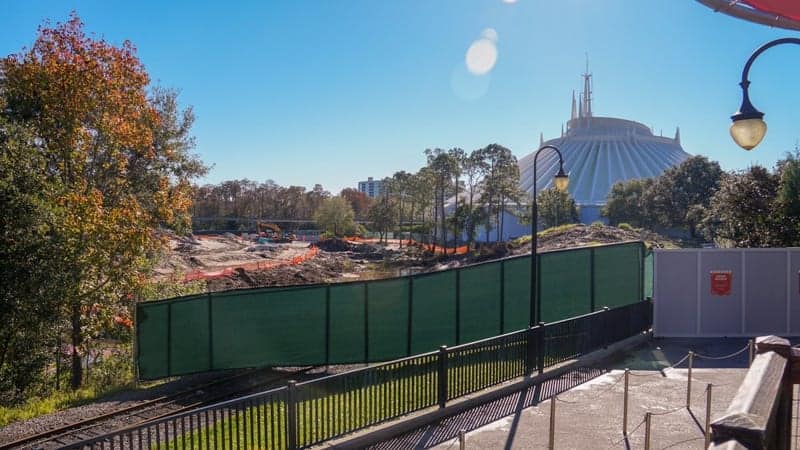 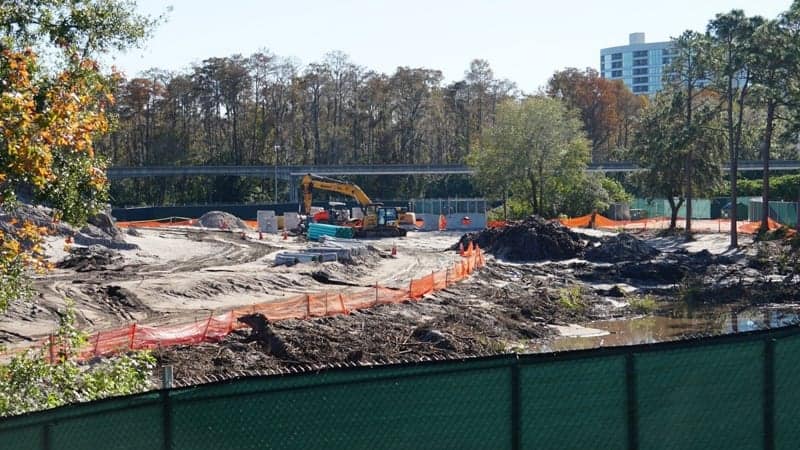 Lots of trees were removed here for the TRON construction and you can even see the Bay Lake Towers now: 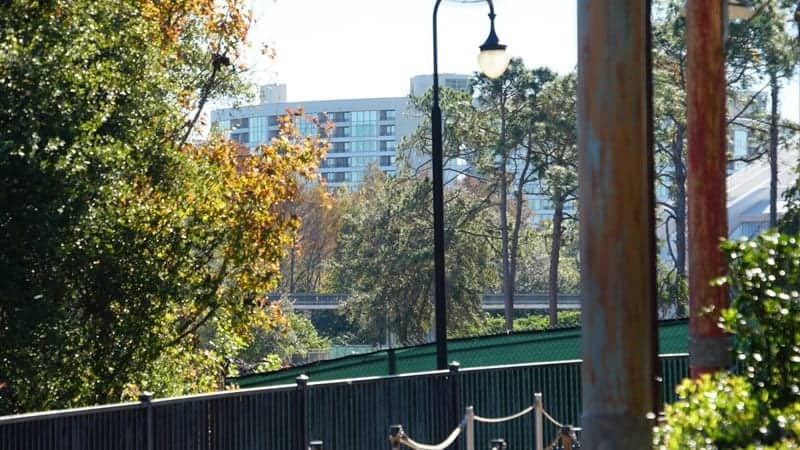 On the right side you can see the old Walt Disney World Railroad ties which have been pulled up from the ground.  Crazy to see them like this but all will be well next year and they’ll be put back into place: 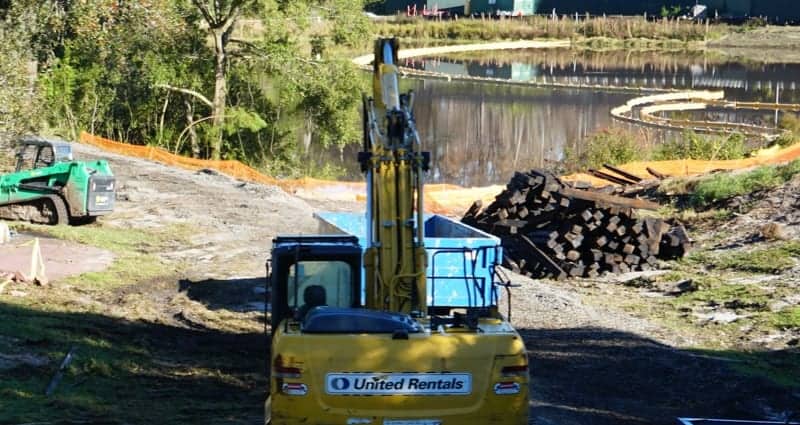 The Tron Roller Coaster will be open in time for the Walt Disney World 50th Anniversary, and while we don’t have an opening date yet, it should be ready by Summer 2021.  It should be a direct clone of the TRON roller coaster in Shanghai Disneyland so don’t expect much difference.