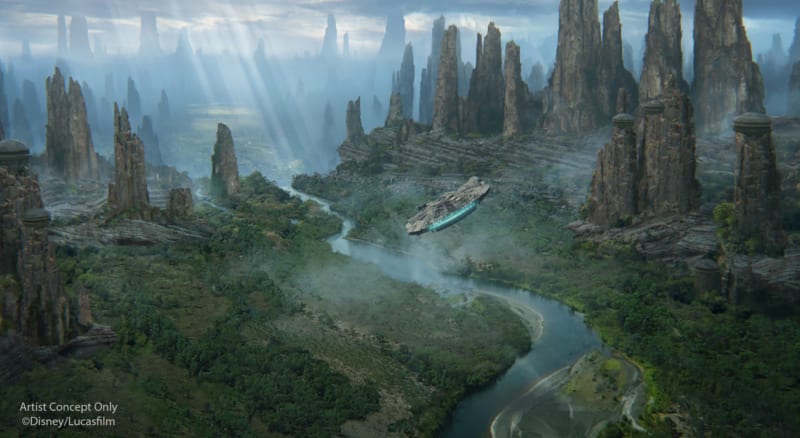 (UPDATE 12/25/18): This morning on the Disney Parks Magical Christmas Day Parade Special we got a sneak peek look at Star Wars Galaxy’s Edge!

While we didn’t get that much new info, they did show some new footage from inside the land’s two attractions: “Millennium Falcon: Smuggler’s Run” and “Star Wars: Rise of the Resistance.”

In Smuggler’s Run they described how everyone in the group will have a job to carry out to complete the mission and they showed some video footage of guests in the cockpit and how they were interacting with the controls.

For Rise of the Resistance they described it as “the biggest and most immersive Disney Parks attraction ever built” which has to have you excited.  They also showed guests moving through the attraction in the ride vehicles that were shown at the D23 Expo in 2017, equipped with a droid on top.  The coolest part though was seeing them go into the room with the two AT-AT walkers and they started to open fire on them!

It’s gonna be an awesome year in 2019 so stay tuned right here for the best source of news for Star Wars Galaxy’s Edge as we continue to bring you more!

(ORIGINAL STORY): Great news coming on December 25, Disney is showing a Star Wars Galaxy’s Edge sneak peek on ABC during the Disney Parks Magical Christmas Day Parade special.  It will give guests a new look inside this highly anticipated new land coming to both Disneyland and Walt Disney World

If you’ve ever seen the parade before you know it’s full of performers, musicians, dancers, etc in Disney’s Magic Kingdom.  It’s always televised around the world and is seen by millions of people.  This year though during the telecast of the parade, Disney will air a special look at Star Wars Galaxy’s Edge, revealing secrets we have yet to learn about.

Don't miss the magical Christmas tradition you love, plus a sneak peek at Star Wars: Galaxy's Edge, coming in 2019 to @Disneyland and @WaltDisneyWorld. The Disney Parks Magical Christmas Day Parade, 12/25 on ABC! pic.twitter.com/PvsZTdLvD3

Disney has been very “hush, hush” about Galaxy’s Edge up to this point, and though we’ve been following the progress every month with construction updates of Galaxy’s Edge, real info about the attractions and the total experience has been low.

During the D23 Destination D event last month we did get a first look at both attractions (“Millennium Falcon: Smuggler’s Run” and “Star Wars: Rise of the Resistance”) with some video footage.  We’ve also learned that one of the land’s two restaurants will be called Oga’s Cantina and we know there will be an entertainment element to it.  The quick service restaurant in Galaxy’s Edge is Docking Bay 7 Food and Cargo.

There is so much more to be learned before the opening next year, how the attractions will work, if there will be any shows, characters meet and greets, etc.  I hope they give us another look at the attractions personally, and we get to see exactly how the Rise of the Resistance ride is going to work and if guests will have a lightsaber!

Let’s hope they really drop some big news as that would make my week!!

In the meantime read our Guide to Star Wars Land for a closer look at the rides, dining plus more planning tips!  It’s going to be very busy in Galaxy’s Edge in the first few months so you can also read our guide on How to get into Star Wars Land.