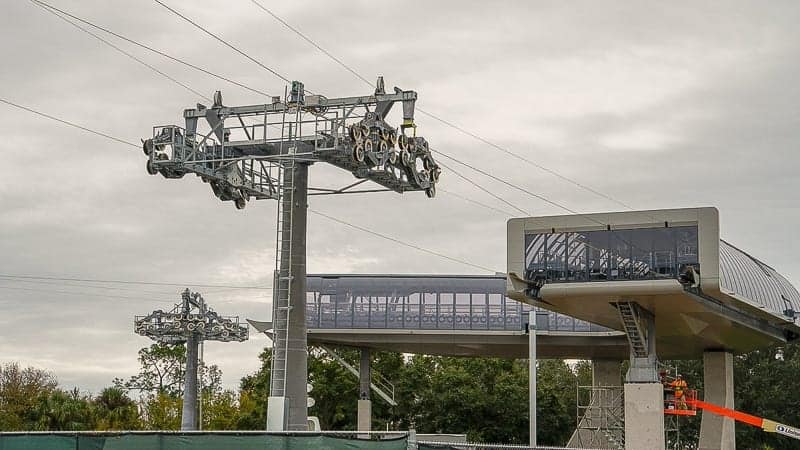 Our Disney Skyliner Gondola Construction Update for December 2018 is our last of the year and it’s gonna be a big one!  There are so many cool new things that have come to the Disney Skyliner in the last month it’s been hard to stay behind all the news, but right now there is a huge cable installation going on throughout the Disney Skyliner locations on WDW property!

Since our last Disney Skyliner update we’ve got a look at the first cables being installed which connect the support towers together and will eventually hold the gondola cars once operational.  In this update we’re going to follow that cable installation around Walt Disney World property as it comes to Epcot and other Skyliner locations.

We also found out some big news at the D23 Destination D conference where Bob Chapek gave guests a first look at the Disney Skyliner Gondola cars themselves!  We also found out that there is NOT going to be Air Conditioning on board the Disney Skyliner after all, though Disney says it will have sufficient ventilation for guests to stay comfortable.

Lastly we found out that the opening date for the Disney Skyliner is going to be a little earlier than originally anticipated and we can take to the Skys in Summer 2019.  I’m sure they want everything to be perfectly in place for the opening of Star Wars Galaxy’s Edge and work out all the potential problems which is going to take a lot of testing.

Thanks as usual to @bioreconstruct over on Twitter for the amazing photos, especially the aerial ones which really give us a good look at the many projects currently underway at Walt Disney World!  Let’s see what’s new so far…

Let’s start out in the middle of all the action at the Caribbean Beach Station which will act as the hub for the Disney Skyliner: 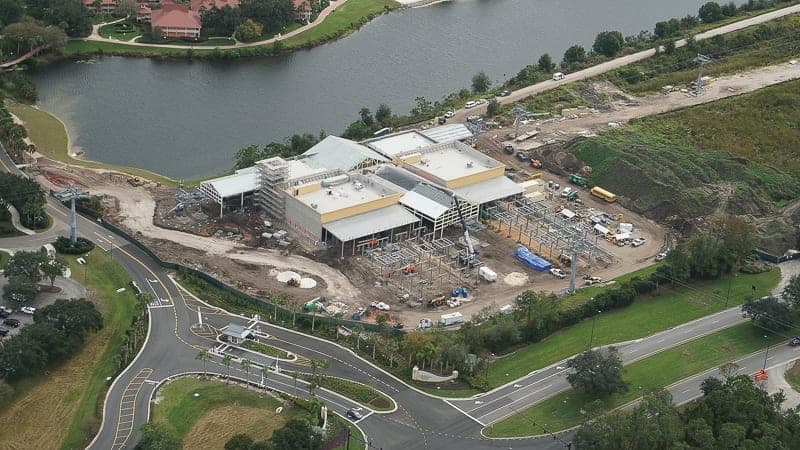 Here we can see cables coming in from 3 different directions.  Now I mentioned before that Disney is in the middle of a huge installation of the cables which will connect all the Disney Skyliner stations together and carry the gondola cars from place to place.  It’s import to note that right now most of those cables haven’t been installed everywhere yet.  In-fact before the actual cables, Disney is using nylon wires to hang first and then guide the actual cables into place: 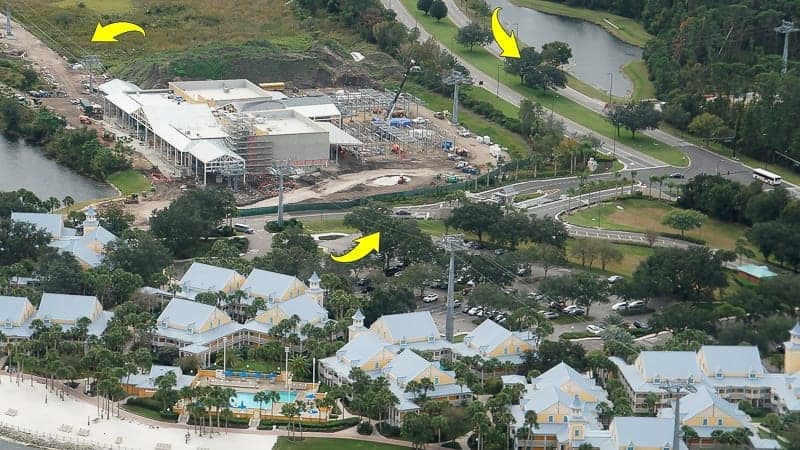 From the Hollywood Studios end you can see a wire which connects the park to the Caribbean Beach hub: 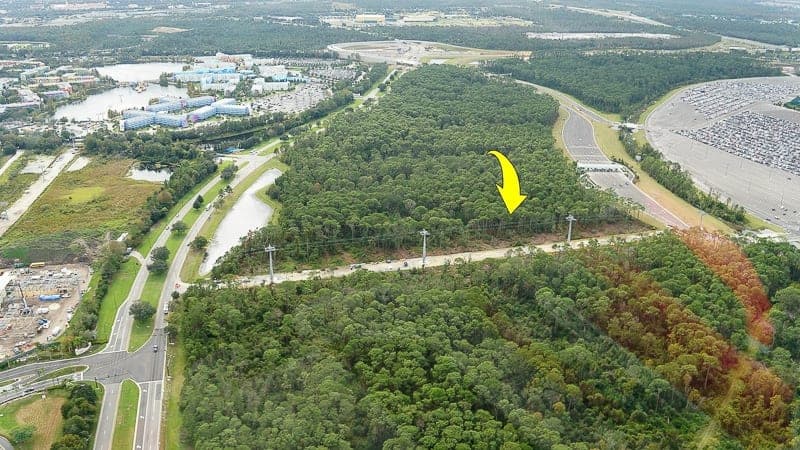 Once we head north towards Epcot from the Caribbean Beach we get to the Turn Station where the Disney Skyliner gondolas will….well, turn to Epcot: 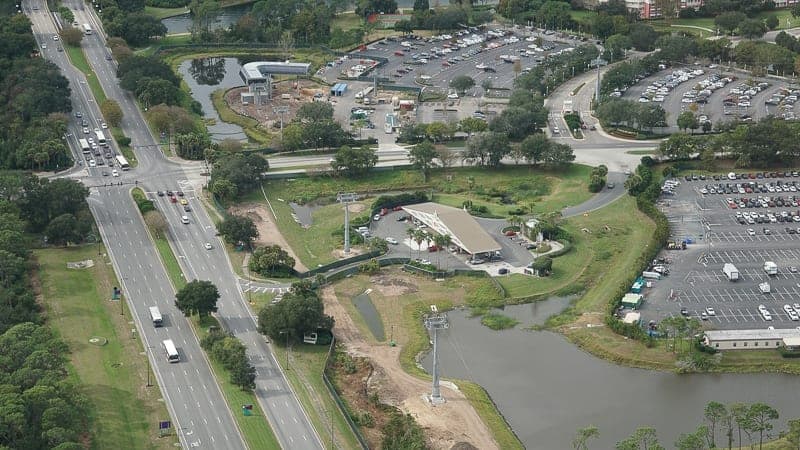 Notice the yellow nylon wire here on the towers: 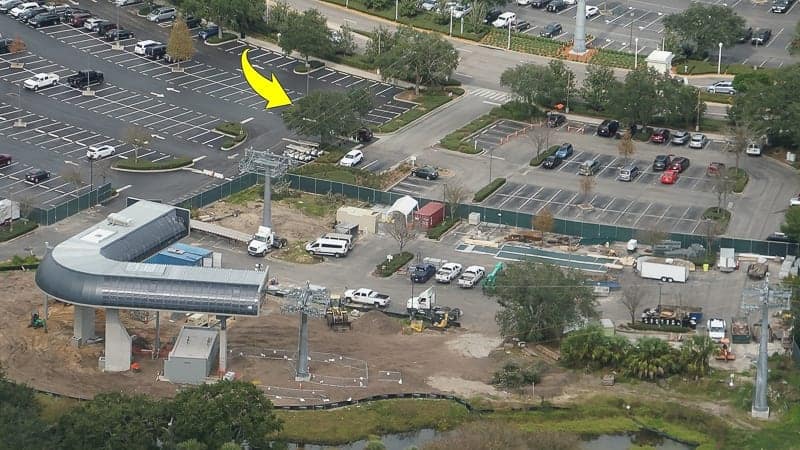 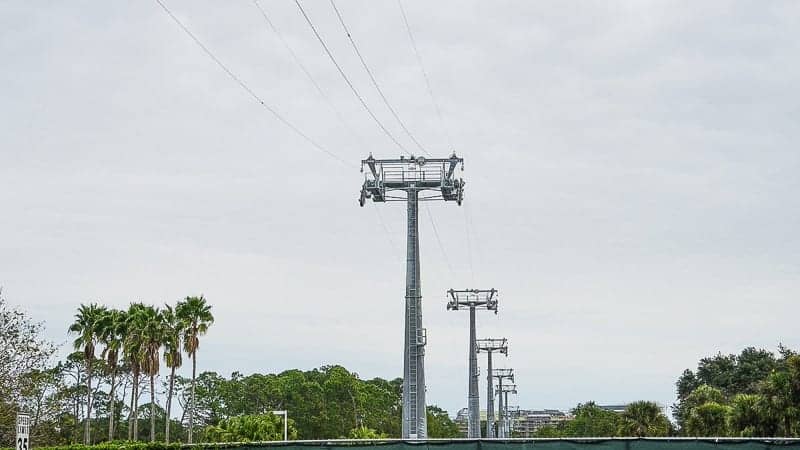 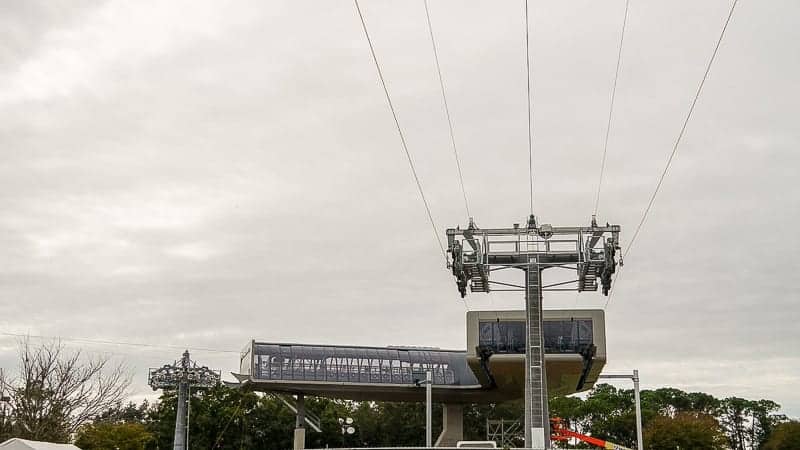 The real cable will be inserted into the pulley system, whereas these are above and used to guide the cables: 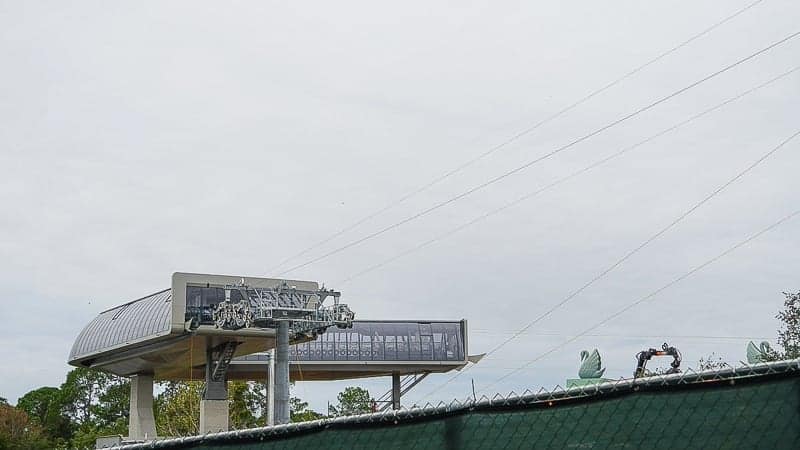 A closer look at the system: 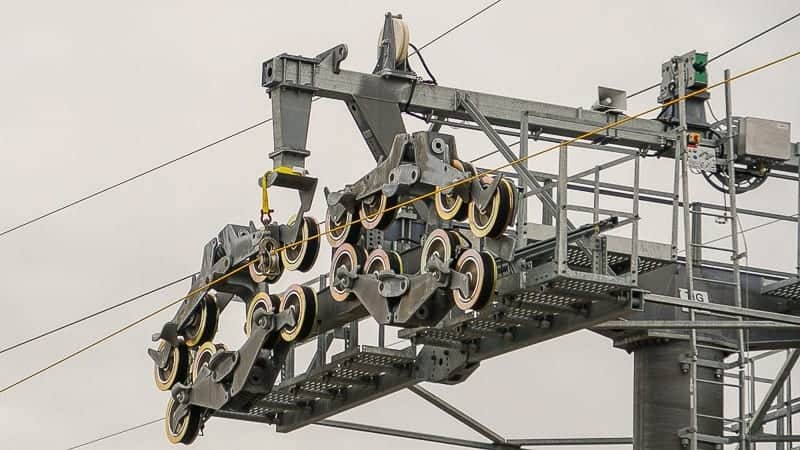 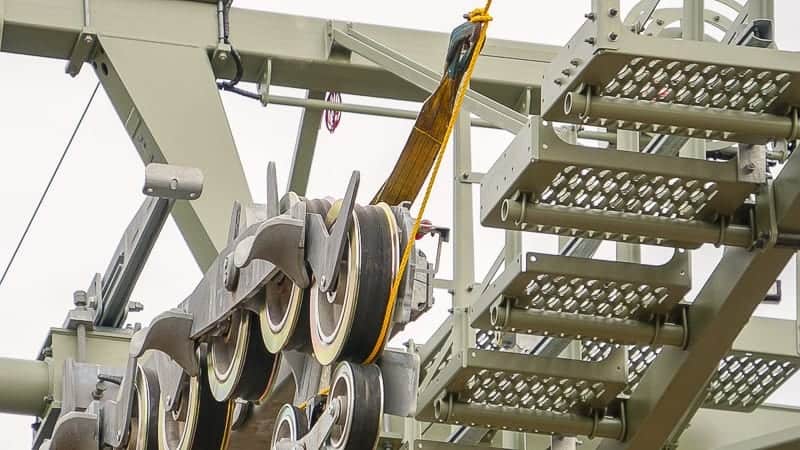 In contrast, here is what the real Disney Skyliner cables look like.  Just a tad stronger, wouldn’t you say?? 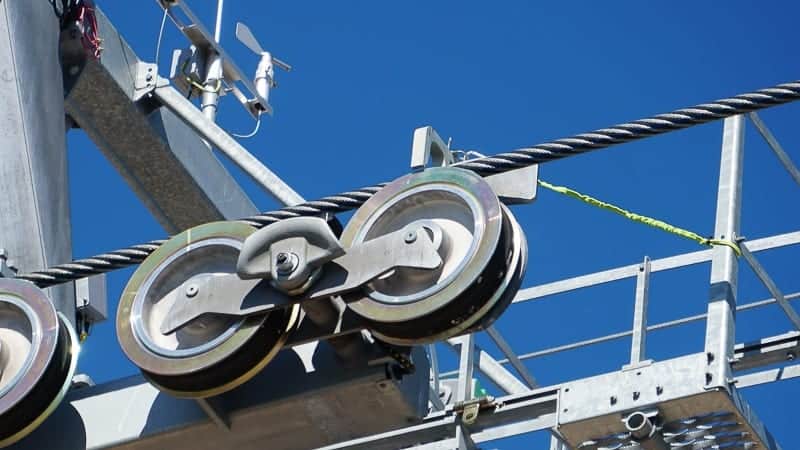 Over in Epcot at the International Gateway we can see the Disney Skyliner towers arriving in Epcot and the same system in place to guide the wires: 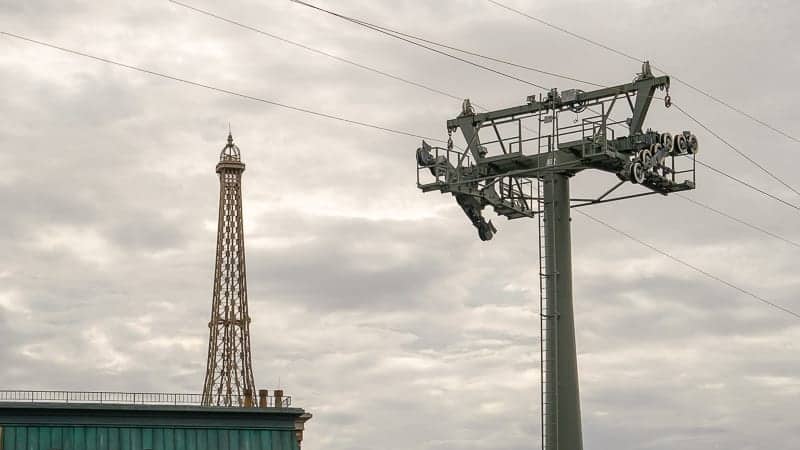 We’re also starting to get an idea of the visibility the Skyliner will give off to guests inside Epcot.  I know some people are up-in-arms over it, saying the clean sight-lines are ruined but unless you are zoomed in like this I don’t see it being that big a deal: 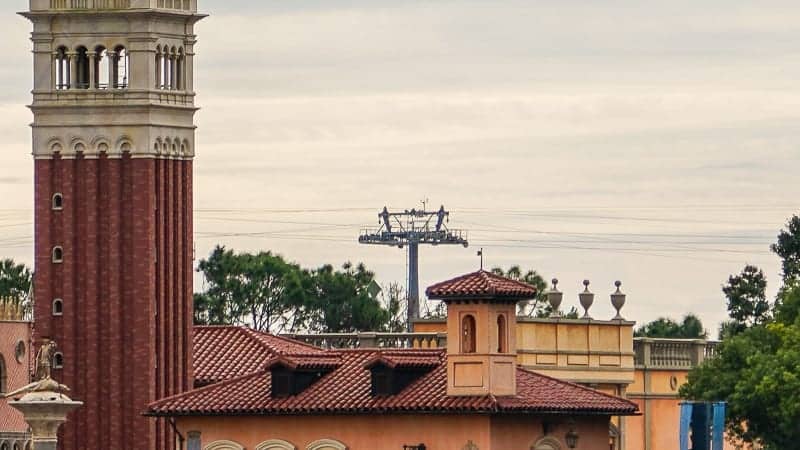 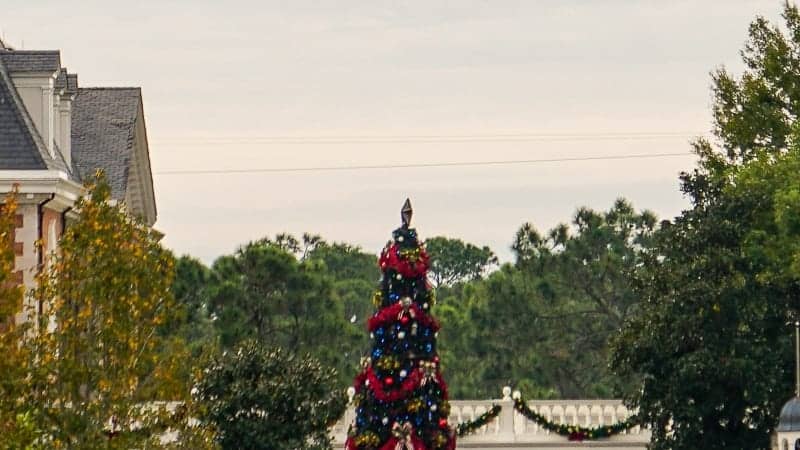 When we finally make it to the Epcot Station, we can see the wires in place here.  BTW, that painting on the top of the station is awesome, Love all the colors!! 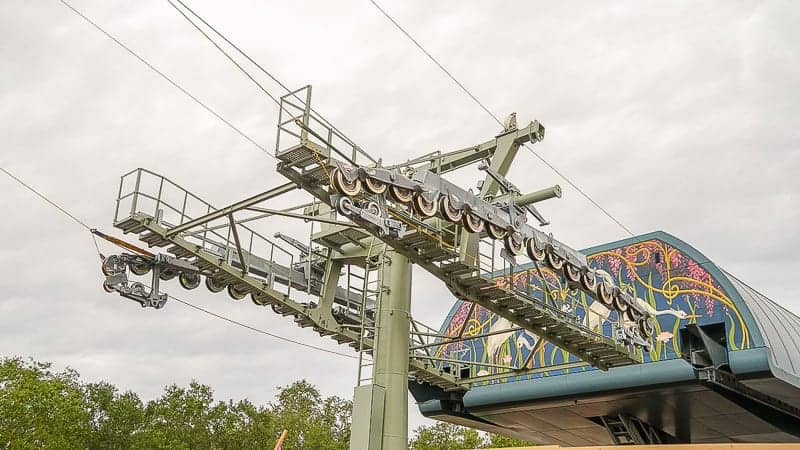 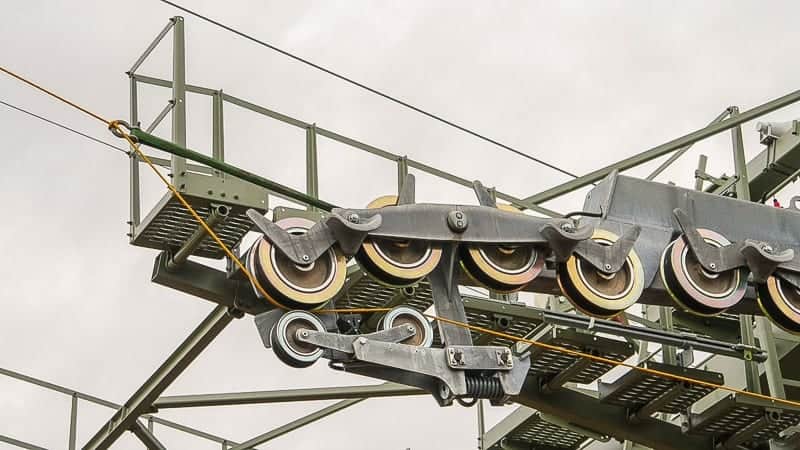 Right now lights are set up outside the Epcot International Gateway to assist in the running of the Skyliner cables.  Again you can distinctly see the yellow ones which are guides.  Because of the cable installation in Epcot right now, the Friendship Boats have been temporarily affected with limited runtimes in the evenings. 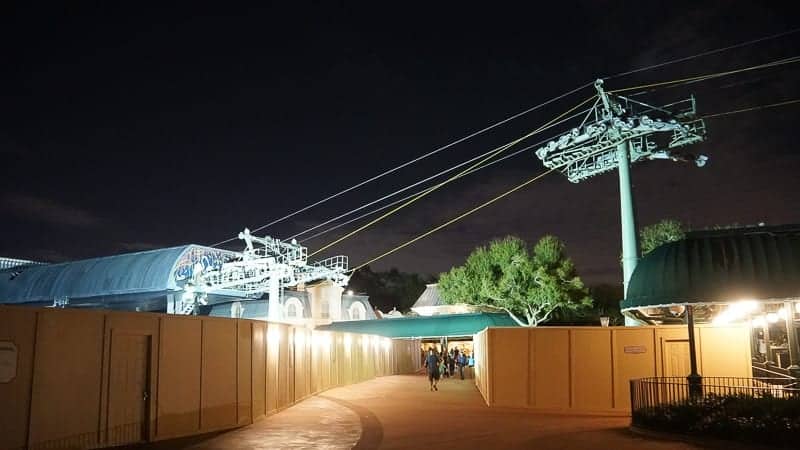 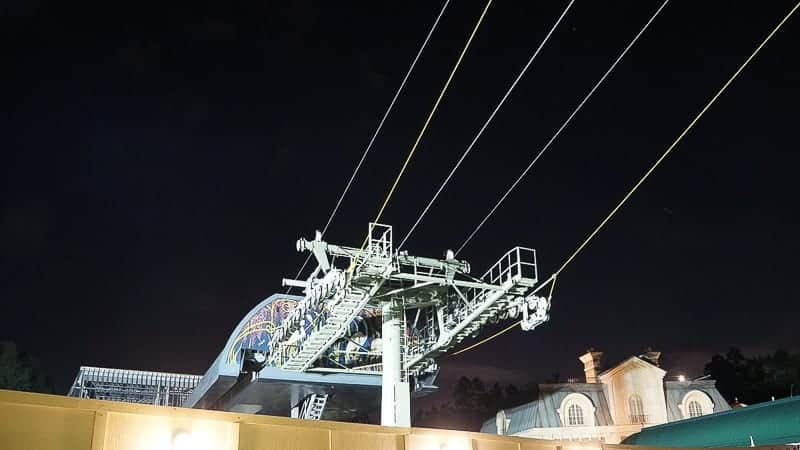 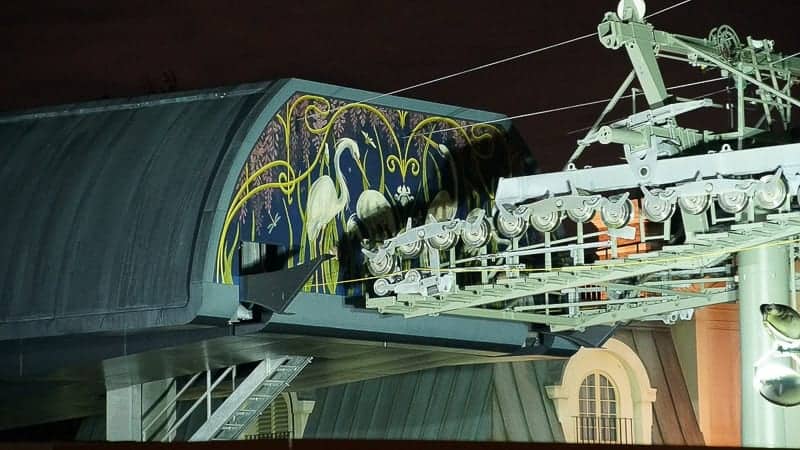 It should be an interesting few days as we wait for all the Disney Skyliner towers to be connected.  We’ll let you know when there are more updates…

It’s been over a week now sine the big push to get the towers connected, and Disney has made significant progress.  The Disney Skyliner Gondola cars have been spotted being tested on the lines in Walt Disney World over the last couple of days, especially in the area of Disney’s Hollywood Studios entrance plaza.

These are not the normal gondolas that will be used for guests, these are service gondolas which are being tested instead.

This photo was taken by Laughing Place: 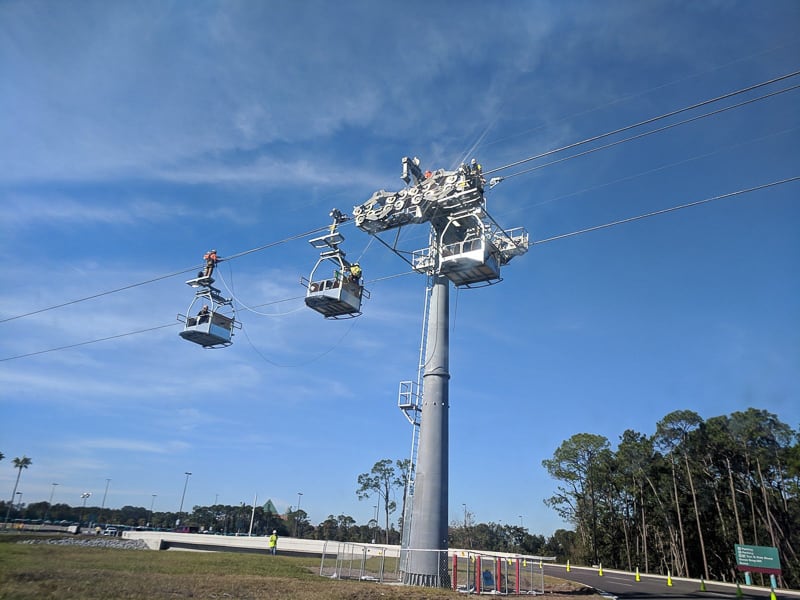 If you want to see what the real Disney Skyliner Gondola buckets will look like, then check out when the Gondola cars debuted at D23 Destination D last month.

Not too much has happened over the last two weeks for the Disney Skyliner, but the wire rope which will be carrying the Disney Skyliner Gondola cars has been installed over most of the planned area in Walt Disney World.  Let’ take a look at a few of the locations to see what’s happening there:

Here we see a shot of the Disney Skyliner station at the Pop Century and Art of Animation station.  The station is located in the upper middle of the picture in the middle of the lake.  A walkway cutting the lake in half will bring guests from both resorts to the station: 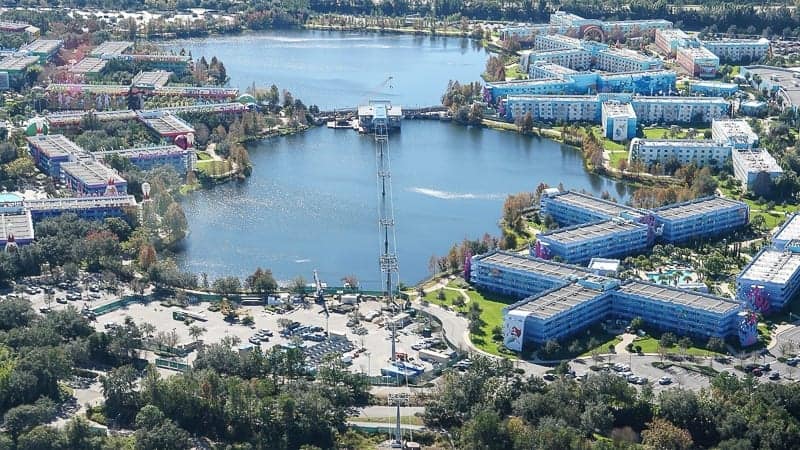 Moving up from there we get to the Skyliner station at the Caribbean Beach Resort.  This is the central hub of the Disney Skyliner with gondolas arriving and leaving from three directions. 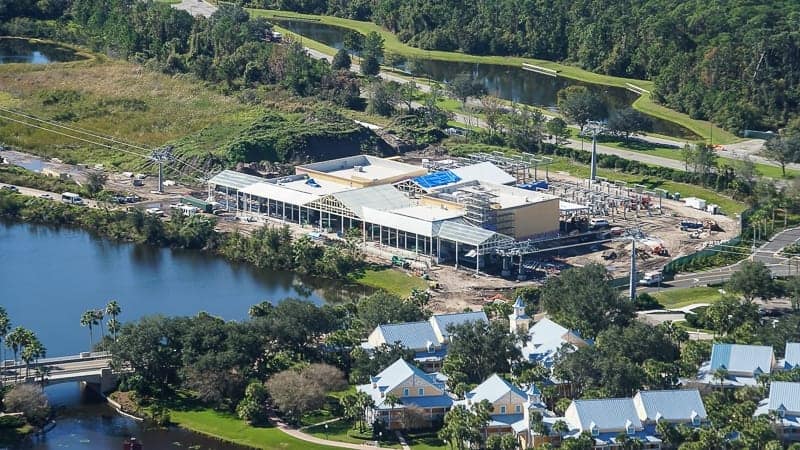 The progress looks nice as the whole building is basically covered by the roof now.  Some of the sides remain open still though.  This is going to be where guests will arrive and then transfer to what ever line they are continuing on, so expect it to be hopping with movement.

At the end of the line when you head out from the Caribbean Beach station you’ll get to the Epcot station at the International Gateway.  We also get a nice glimpse of Remy’s Ratatouille Adventure which looks like it has been just about completely closed in too. 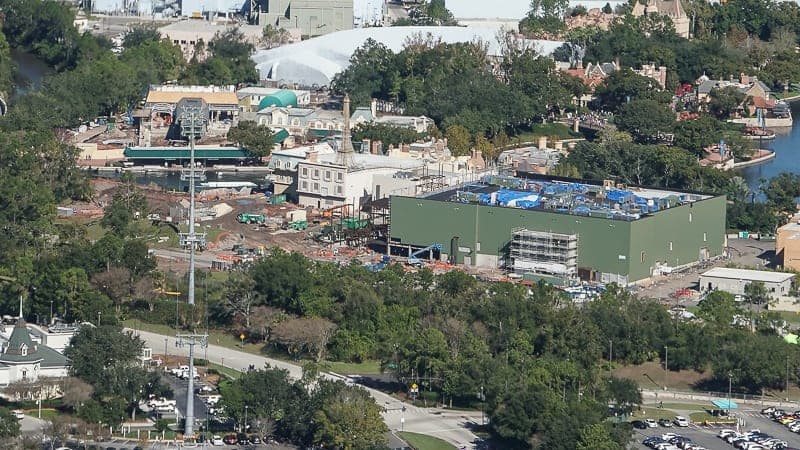 This is going to be a prime spot for photos from up on the Skyliner because you are going to pass directly by the new attraction and over the France expansion which will have a beautiful square with shops and food.  It’s going to be a great “welcome” to Epcot moment.

From down on the ground you can see the wire rope has been installed already which will carry the gondola cars behind the France pavilion and into the station: 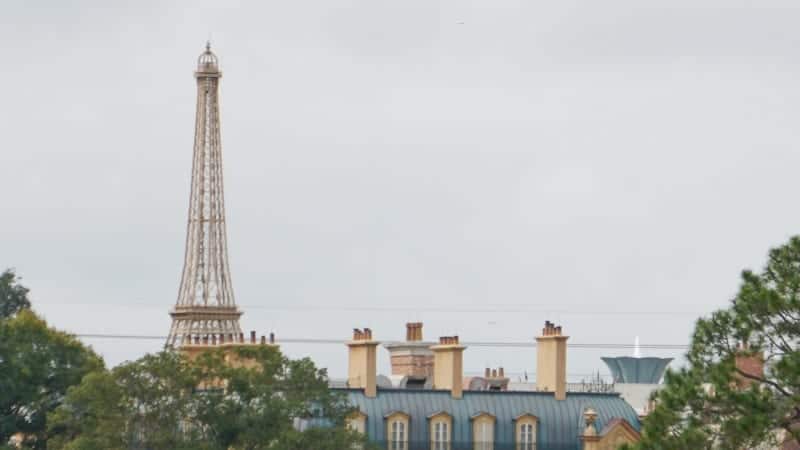 The Disney Skyliner doesn’t have an exact date yet, but we do know it will be opening in Fall 2019 opening with things fully in place well before Star Wars Galaxy’s Edge opens up at the end of 2019.  Stay tuned for more updates and info….