This is an update for the New Hollywood Studios Access and Parking Lot Expansion.  Why is one needed?  Well, unless you’ve been living under a rock for a few years, you know that Disney’s Hollywood Studios is undergoing a massive expansion project right now, including Toy Story Land, Star Wars Galaxy’s Edge and Mickey and Minnie’s Runaway Railway all which are set to be completed either in 2018 or 2019.  Obviously with new attractions and lands come more guests, a lot more.  So to help make room for the influx of people that will be coming, they are working on a new access road to and from Hollywood Studios and more parking to put them all.

This is the intersection of Osceola Parkway and Victoria Way.  Here you can see new entrance/exit ramps and access road to Disney’s Hollywood Studios.  Art of Animation Resort is on the right, and the far top left corner you can see the parking lot for Hollywood Studios.  Notice also the curved overpass in the middle of the photo: 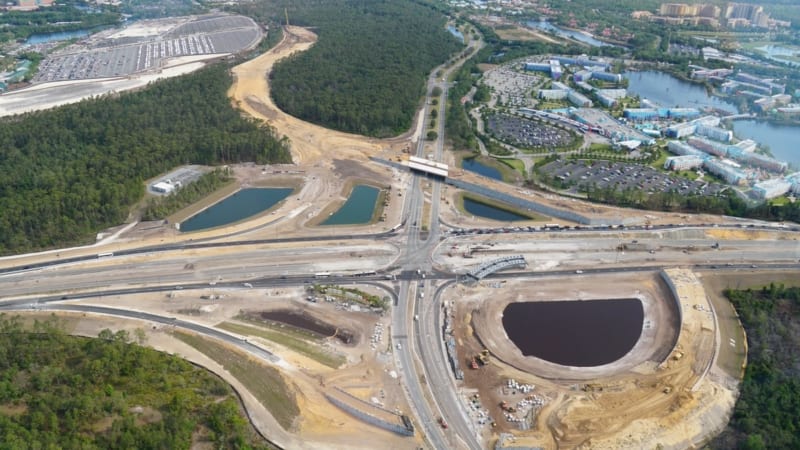 Here’s a closer up look at part of the overpass leading out of Hollywood Studios: 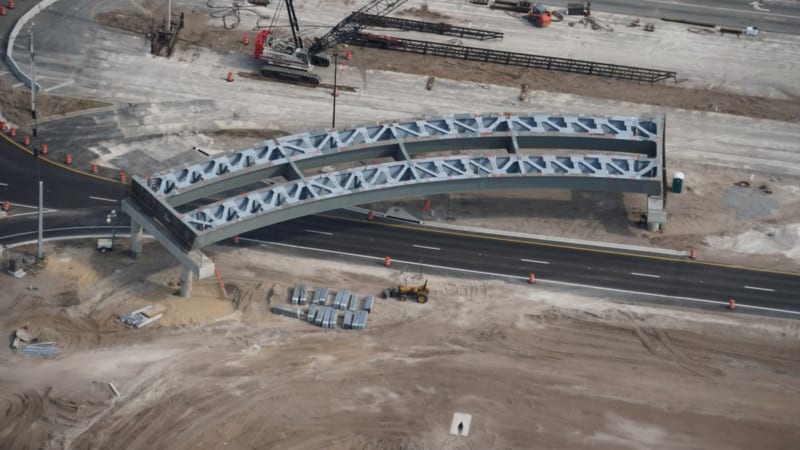 Here’s a shot from the ground: 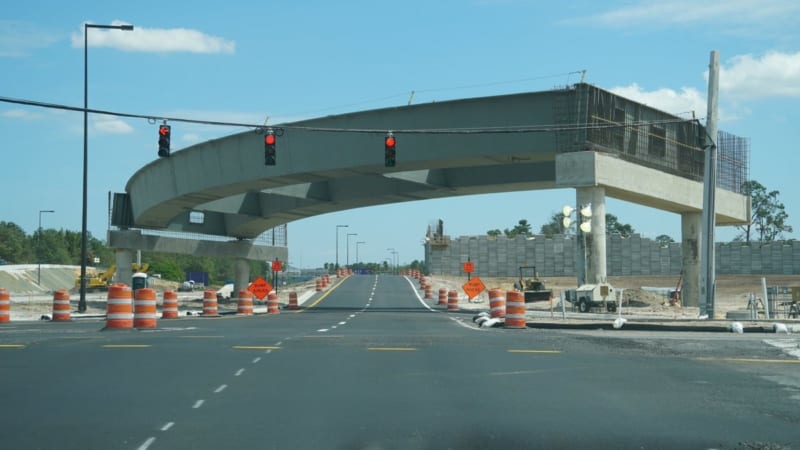 So the arrows show how the traffic from the Osceola Parkway will flow around the new ramps, over and into Disney’s Hollywood Studios: 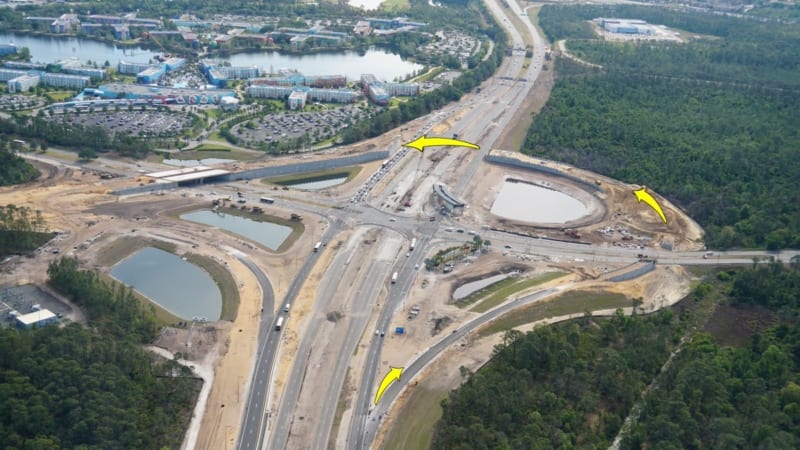 Here you can see how traffic will then flow out of the park to Osceola Parkway and I-4: 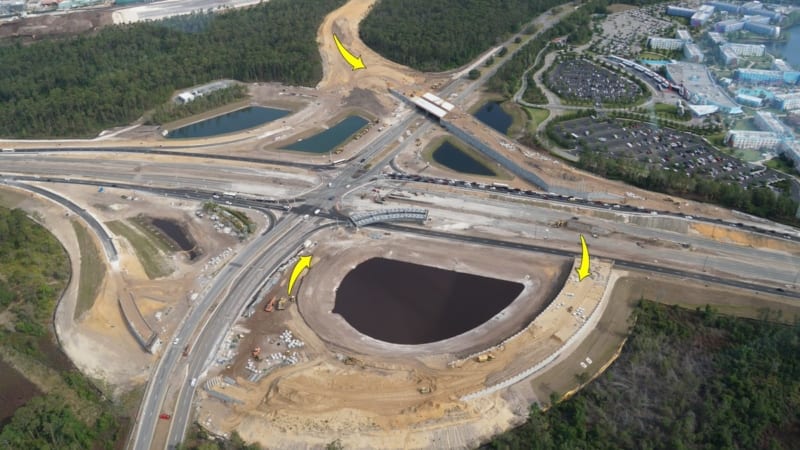 The arrow furthest left and furthest right indicate the parking lot expansion which will make room for more cars, both for guests and Cast Members alike.  At the top middle you see New Tool Plaza.  The traffic from the previous photos coming to Hollywood Studios will now arrive there to enter the parking lot.  In the middle there’s one small arrow indicating the current Toll Plaza, which should be eventually done away with. 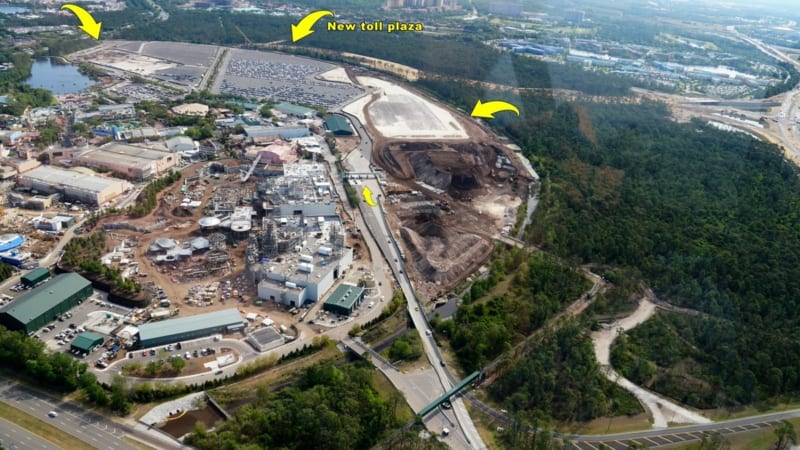 This goes back to my theory of where the new Star Wars Hotel location will be.  To the left of the old toll plaza you have Galaxy’s Edge, and to the right some huge dirt mounds, which was brought in from a nearby excavated area.  This looks to be the ideal location for the Star Wars Hotel as the old access road can be eliminated, putting the hotel directly near Galaxy’s Edge.  Even if for some reason the road remains, a simple covered bridge over it would allow easy access to Galaxy’s Edge for guests staying there.

Let’s look down at some of the Hollywood Studios parking lot expansion photos.  This section is located near the Bus Drop-off/Pick-up area, and you can even see the Disney Skyliner Station for Hollywood Studios to the left near the water: 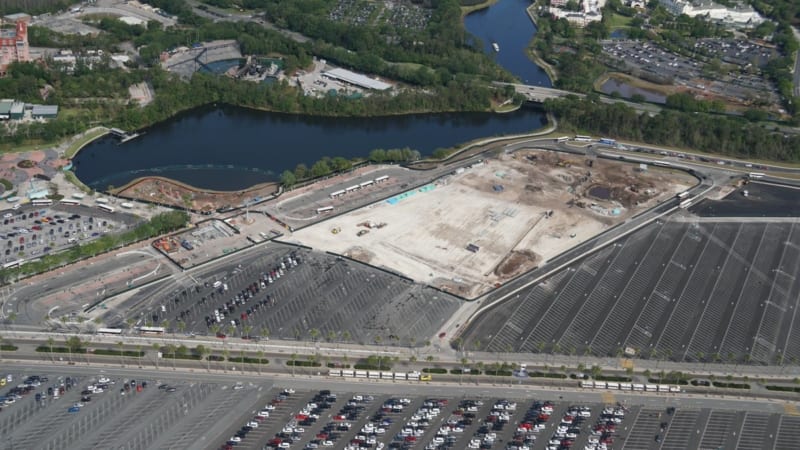 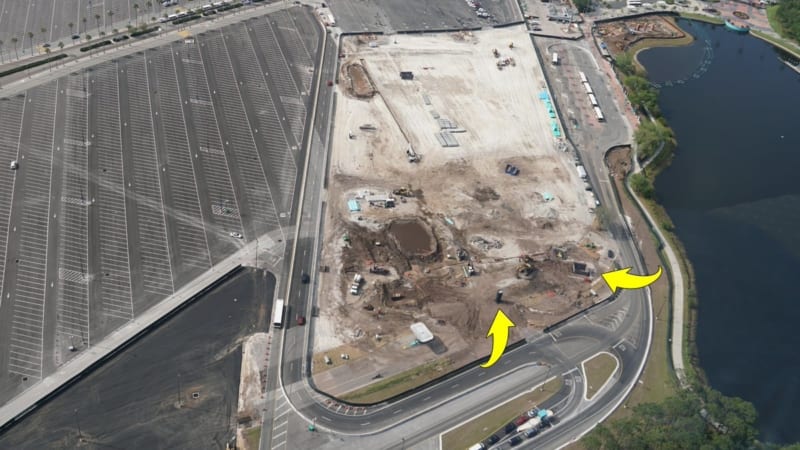 So things are moving quite fast in Hollywood Studios, but we don’t know exactly when the new parking lot or access road will be open, but I would think sometime by the end of 2018-early 2019 to make way for everything that’s coming!

I want to know what you think about the potential Star Wars Hotel Location construction progress.