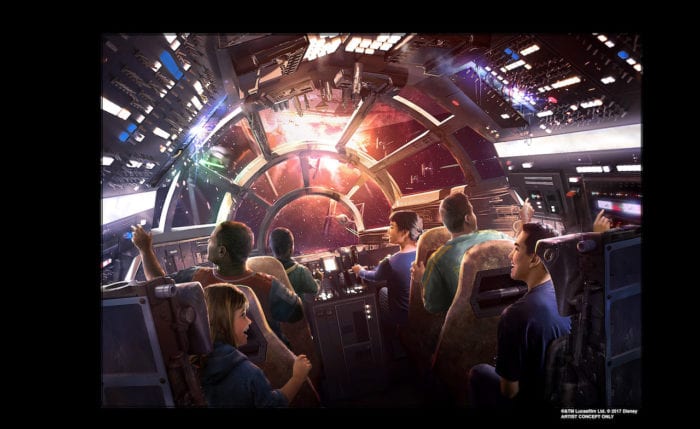 Everyone at D23 Expo was excited about all the millions of announcements we received, but what everyone really wanted to know more about was Star Wars Land, and what we got was incredible!  First on Friday we got a look at the Star Wars Land display which had many Star Wars objects which will be used in the land.  We also got a look at an unbelievable scale model of the entire land coming to both Disneyland and Hollywood Studios.  Some waited hours to get in and see…

Then yesterday at the Parks and Resorts panel, Bob Chapek, Chairman of Walt Disney Parks & Resorts, revealed the official name of the Star Wars-inspired lands and shared details on the immersive experiences guests will be able to enjoy when the lands open in 2019: Star Wars: Galaxy’s Edge.

They still didn’t tell us the name or location of the land, only that it’s a remote trading port on the edge of wild space, where Star Wars characters and their stories come to life – and where guests will find themselves in the middle of the action.

Trust me, I tried prying any extra info out of the Lead Imagineer who was at the display explaining it to us, but he wouldn’t budge!  But I did get out of him that the Star Wars Land in Disneyland will be opening BEFORE the one in Hollywood Studios, in time for the next D23 Expo in 2019.  The WDW version he did confirm for later in 2019 though… 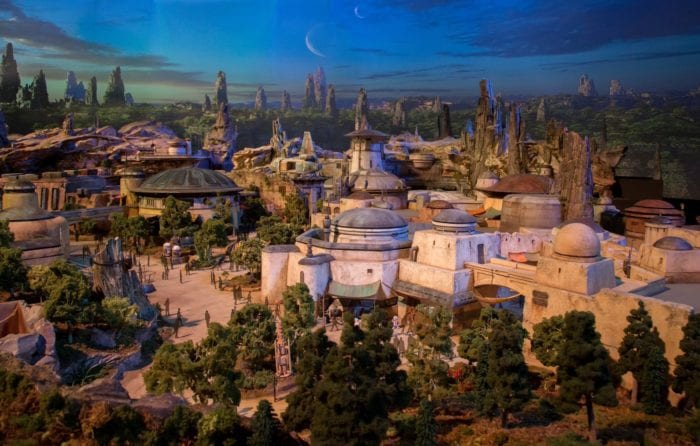 There will be two major attractions that put guests in the middle of a battle between the First Order and the Resistance.  Both of these will be like nothing you’ve ever experienced before in a theme park, really immersing you in the Star Wars experience.  Expect droids, aliens and other Star Wars characters walking around the land, interacting with guests, but staying in character and making you really feel like you are on this planet! 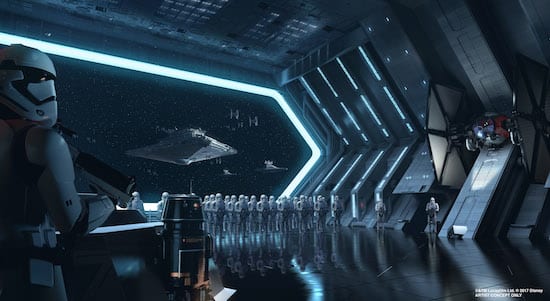 The first attraction I saw on the model is on the left side and is the first order battle attraction, which will take you on Star Destroyer inside a hangar bay and is being built on a scale which has never been done before.  The Imagineer wouldn’t confirm it but it sure looks like it will go inside the mountain-like structure in the back of the land on the left and middle.  We got a look at the ride vehicle, which uses an advanced trackless system.  Here’s one of the vehicles: 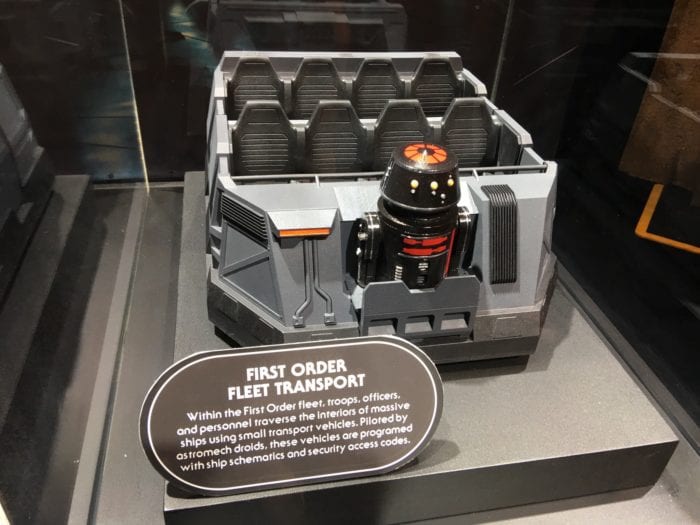 The second attraction, located on the right side of the land, will give guests the opportunity to fulfill a childhood dream…. fly the Millenium Falcon.  You’ll have to pilot the ship, shoot blasters or prepare for hyperspace – all while completing a critical mission.

But the cool thing is how you perform on the mission is important in the land, and gets you skill and you may earn extra galactic credits, while bringing the ship back banged up could put you on the list of a bounty hunter.  I found out that the characters you interact with in the land will know how you performed on the attractions and could give you grief if you do bad.  Sounds incredible!

Like I said you will encounter many familiar faces inside Star Wars: Galaxy’s Edge, including BB-8, Chewbacca, members of the First Order and even Rex, the troublesome pilot you may remember from the previous version of a certain Disney attraction who is now DJ at the cantina.

And of course we wouldn’t leave out the food.  Guests will be able to try unique Star Wars Food like the famous blue milk for example!  And you can expect to find lots of gadgets and souvenirs to help you remember this once in a life-time trip.

Again both Star Wars: Galaxy’s Edge lands will open in 2019,  first at the Disneyland Resort and then later in 2019 at Walt Disney World Resort.  I don’t know about you but I feel like a 1-year old boy again and can’t wait to step inside this immersive universe and see what it’s all about for myself!

I want to know what you think about the new Star Wars Land Information we got from the D23 Expo.  How do you think everything is shaping up?  Which part are you most looking forward to?  Let us know in the comments section below!