UPDATE 11/14/18: According to Walt Disney World officials, the Monorail door didn’t fall off, but became unhinged when a motorized scooter hit it.  They are trying to make clear the door didn’t come off on its own, but because it was struck.  While that might be slightly more encouraging news, the door as you can see in the photos below looks like it got hit hard enough that it came unhinged and was hanging off the monorail.  It then had to be repaired which is why you saw repair workers up on a cherry pickers fixing it.

A Disney spokesperson said today that the impact was enough to unhinge the door and fall off the monorail.  However either that was the highest impact motorized scooter accident in history, or the monorail was already that fragile enough to have the door fall off.  I mean it seems not very likely if the door was sturdy that it could come off that easily.  Either way the repairmen had it working later in the day.  I guess we’ll find out soon enough if this is enough to push Disney’s hand in the matter, though I’m not hopeful.

ORIGINAL STORY: We know about the various incidents with the Walt Disney World Monorail system lately, but this one takes the cake!  Today on the Lime line a Monorail door fell off in Walt Disney World at the Grand Floridian Resort & Spa station. 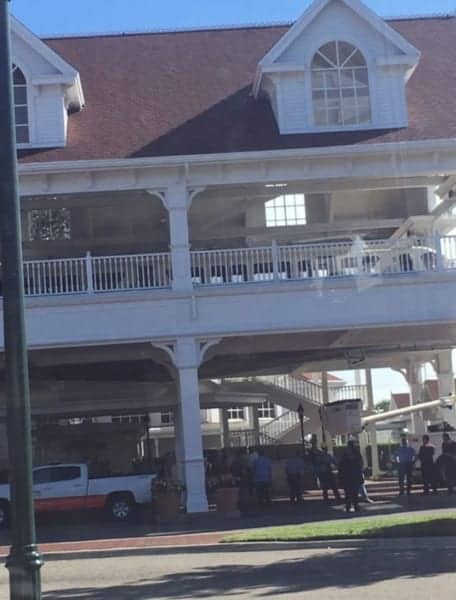 Notice the door completely off the monorail and hanging down from the upper level down to the bottom and the cherry picker and workers there to retrieve it: 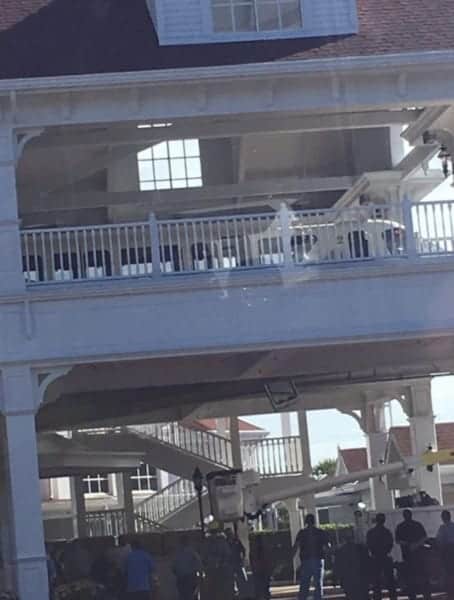 Later on the crew was seen taking down the whole door safely from the platform: 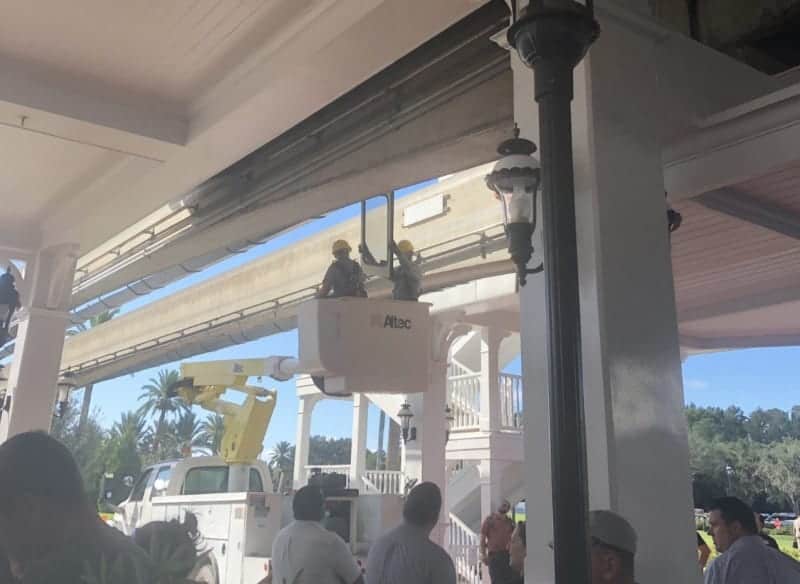 This incident happened between the Express and Resort Line tracks, causing delays for hours for Walt Disney World guests.  Supposedly the monorail door fell when a scooter operated by a guest rammed the door and knocked it loose.

After this incident the rumors about a new Monorail system should start to pick up again, I honestly don’t know how Disney can continue to use it.  As far as we know no one was hurt in the incident but it emphasizes the need for the Walt Disney World Monorail system to be upgraded ASAP.  Already one of the monorail doors opened up earlier this year with passengers on board, they are lucky that again no one was hurt.

I have been a huge fan of the WDW Monorail system since the MK IV trains. They are my favorite ride. Probably always will be. With the increase in incidents happening to the monorails, namely the monorials, I think the guest should be giving this a lot more concern that they are.

Lets look at those doors, as a guests observation.

The door is supposed to be secure when it closes. Ever notice when it slams shut, it has that little upward movement? That would appear to be some sort of locking movement, say where two fingers may grip together as the door is closed and moved upward, or perhaps the door hinge moves into a locked positon to secure the door from opening. To open, the door must move down to free itself from the latching mechanism and then it can open to release the captives, I mean the guests to the platform.... Sounds simple, no??

I understand there is a cable that runs the length of the train from the Drivers cab and this cable somehow releases/opens/closes/secures the doors of each car at the save time. I am pretty sure I read this on the internet somewhere. LOL

When trying to reason this out, that cable and the door mechanisms are Safety mechanisms and should be on an inspection sheet. Then again there are complaints by the guests that the monorails smell like rest rooms, a simple matter of having a crew clean and sanitize the monorails every evening could take care of that.

Now, the monorails run hundreds of miles a day, maybe thousands of miles. All these mechanisms are being used, at every train stop. I'd say every 1 to 4 minutes, the spiel to stay away from the doors is heard, the doors lower, open, then close, move up to latch, and the monorail takes off for the next station. There is a lot of wear and tear on equipment like this. If anyone should know this, DISNEY should know.

It seems to be obvious, that somebody is missing the boat here. Either there is too little, or no maintenance, or too little money being spent on parts, too few people to keep up with the maintenance on the monorails, ESPECIALLY in the interior for clean up, and things are just wearing out. It just does not feel like the problem is a lack of money..

Now think about Disneys statement. They said someone on a electric cart bumped the door and knocked it off the hinges. If a door can be knocked off the hinges, then how can the same door and same hinges move up and down to latch the door hundreds of times per day for almost 40 years, and not fall off the hinges?? That CART that knocked the door off the hinges must have been the size of a VOLKSWAGEN.

thanks for the comment! You really put a lot of thought behind it so I appreciate that and share many of the same thoughts as you. Let's hope Disney stops ignoring the monorail system and we get an update soon, they certainly need it. It's also one of my favorite attractions in WDW and I hope it stays that way for decades to come!

Yes, the monorails are in desperate need to be updated! I also see another issue with guests using motorized scooters. I have no doubt that there are hundreds of guests (if not a few thousand) daily who truly need them, however as someone who has nearly been run-over by a guest using a scooter and my legs "tapped" by a rider, I am concerned about the frequent number of these scooters I see daily at the parks. All too often I see children in the lap of a guest riding scooter or teenagers using them for joyrides. If they are going to also potentially damage Disney property or injure someone more seriously this potentially could be an even bigger issue again.

Update and fix the iconic monorail!