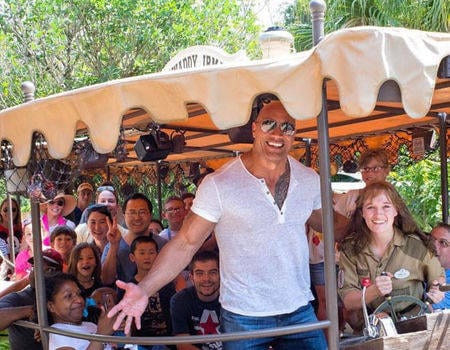 I couldn’t believe when the news first broke about Dwayne Johnson starring in a live-action Jungle Cruise film, it seemed a little far-fetched.  Yet today on Facebook we got to see a video of Dwayne Johnson signing his contract for the Jungle Cruise movie and they are ready to start filming Monday.  Of course the film is based on the iconic Disneyland/Walt Disney World attraction, the Jungle Cruise as it follows in the footsteps of other Disney attractions such as Pirates of the Caribbean in getting converted to a film.

Even after all the films he’s done, he still looks nervous, and Johnson even mentioned how Pirates of the Caribbean was a big inspiration to him and how ever since he saw that he’s wanted to do a similar movie for Disney.  He also cited the tremendous pressure to make a great film.  He said: “Walt I will do everything in my DNA to make you proud, world I will do everything to make a movie that does not suck.”

You can see a video of “The Rock” Dwayne Johnson signing his contract here:

Lil’ nervous signing the biggest contract of my career for JUNGLE CRUISE. Think I had an out of body, “holy shit this is really happening” moment lol. 15yrs ago when I saw the first trailer for PIRATES OF THE CARIBBEAN I was blown away and so inspired. I was just starting my acting career at that time and thought man one day if I could make a movie based off an iconic and beloved Disney ride – that took audiences on that kind of vintage adventure and fun, it’d be a dream come true. So I vowed to put in the hard work…and 15yrs later here we are today. Promise to do my best to make ya proud, Walt. And for the love of all that’s holy, can my producing partners Beau Flynn and Hiram Garcia please get me a pen that has ink!?#DISNEY #JUNGLECRUISE #ContractSigning #DreamComeTrue #Imagination #MyNerves #INeedADrink

Dwayne Johnson stars alongside Emily Blunt in the Jungle Cruise film, and we know the filming will take place in Kauai, Hawaii; Atlanta, Georgia; and South America.  It is being directed by Jaume Collet-Serra, and produced by John Davis and John Fox.   No release date has been given for the Jungle Cruise yet, but stay tuned as more info comes out.

I want to know what you think about Dwayne Johnson signing his contract for the Jungle Cruise film.