This is a Star Wars Galaxy’s Edge Construction Update for November 2017.  Last month we saw that some new permits were filed for some  external architectural components of Galaxy’s Edge have started coming into place on top of the show building, leading us to wonder if the opening date will be later than expected.  This time we’re going to look at now some of the land elements are being constructed and also the progress on the Star Wars Galaxy’s Edge entrance tunnel which is ready to be poured with concrete.

Thanks as usual to @bioreconstruct over on Twitter for some awesome shots of Galaxy’s Edge and the construction progress being made in Disney’s Hollywood Studios.  Let’s take a look:

So right at the beginning of Galaxy’s Edge, you can see the entrance to the tunnel which starts off the newly made Grand Avenue.  Just as we expected, the entrance tunnel will be curved so guests standing on Grand Ave won’t be able to see into Galaxy’s Edge but will just see tunnel: 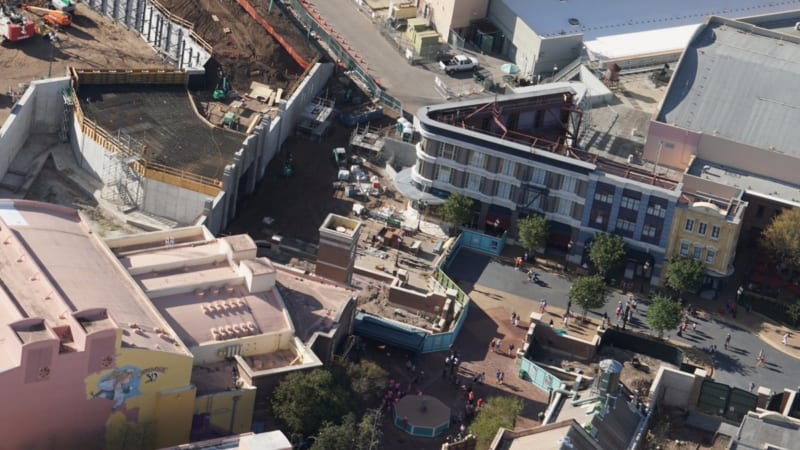 In the center you see the entrance tunnel ready for a concrete pour.  I love this idea to have a tunnel separating Grand Avenue from Galaxy’s Edge because it would really ruin the ambiance being able to see right in: 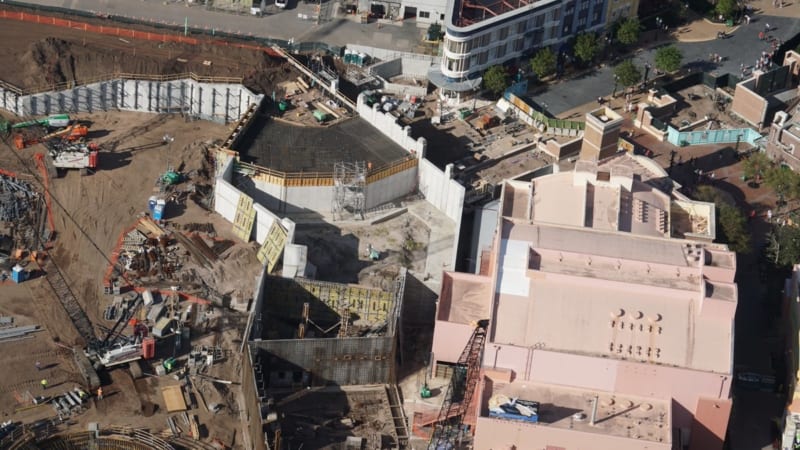 These concrete retaining walls near the entrance and the First Order Battle Escape attraction seem to have doors in them.  Will this be for cast member movability in and out of Galaxy’s Edge? 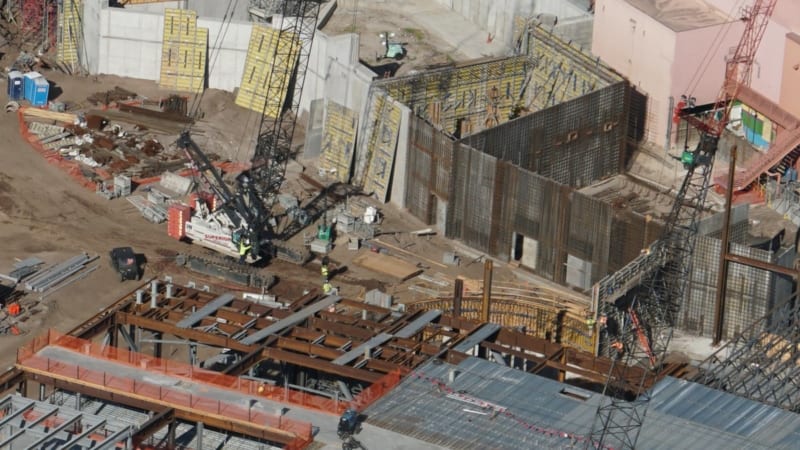 As you look at the entrance from the inside of Star Wars Galaxy’s Edge you can really see the height of the walls that form the tunnel and the surrounding area.  The dirt hill on the left of the shot also gives you an idea how high the whole thing is, again trying to preserve the ambiance of being on this remote planet: 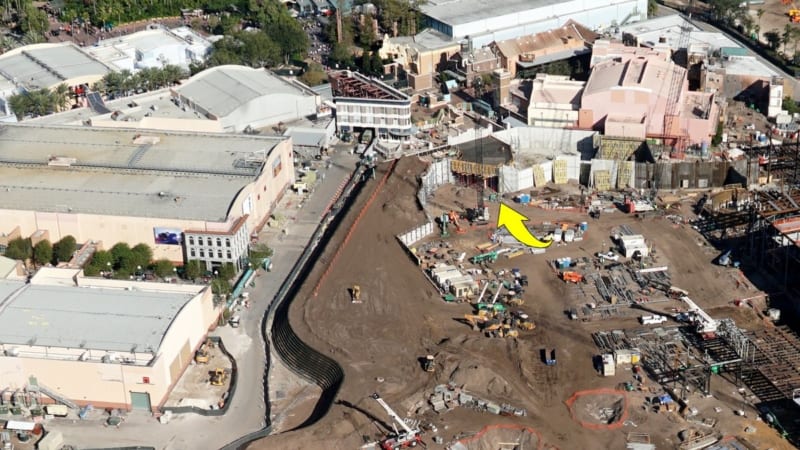 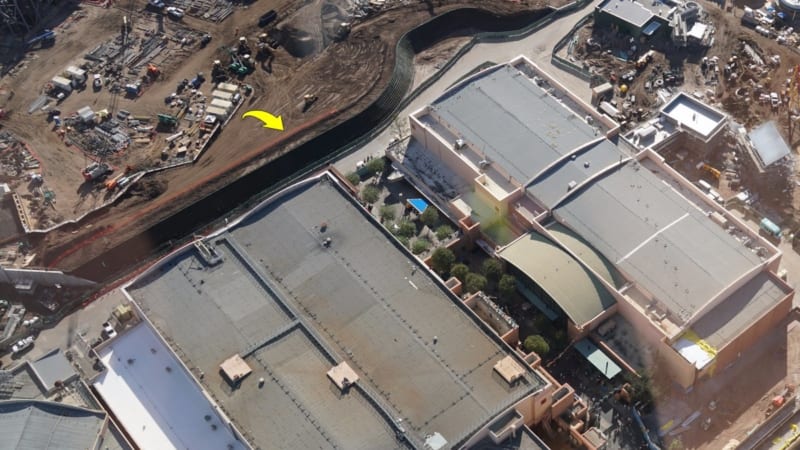 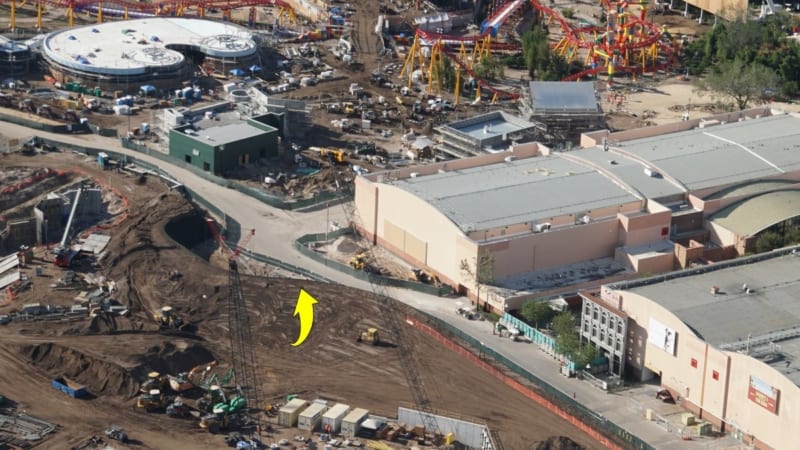 A current look over the hill from Grand Avenue: 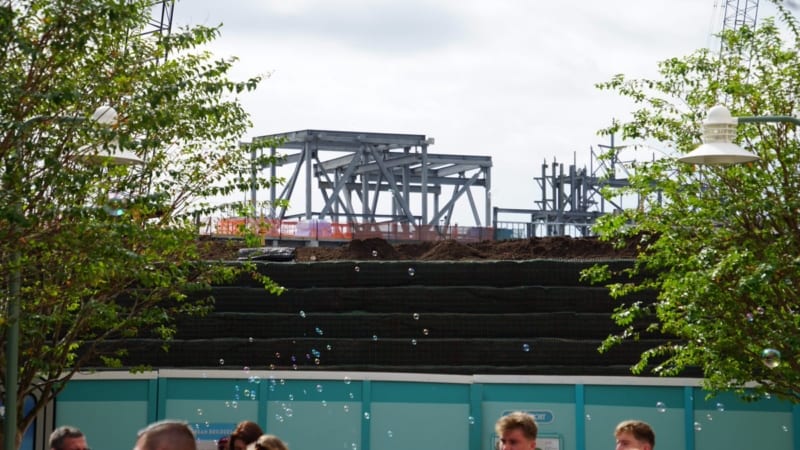 I don’t know if it will really be possible to keep Galaxy’s Edge totally hidden from the other areas of the park seeing as the show buildings especially are quite tall.  Although maybe with some tall trees being planted on top of the hill surrounding it that might do the trick.  Even more important than the people outside seeing in is not being able to see out of Galaxy’s Edge once you are inside it.  Disney needs to do a good job of this seeing as they are really going at great lengths to make it a total Star Wars immersive experience once inside.

Now onto the attractions!  Here you can see the First Order Battle Escape attraction near the previously mentioned cement walls with the doors in them.  The proximity of Battle Escape to The Muppets is quite close: 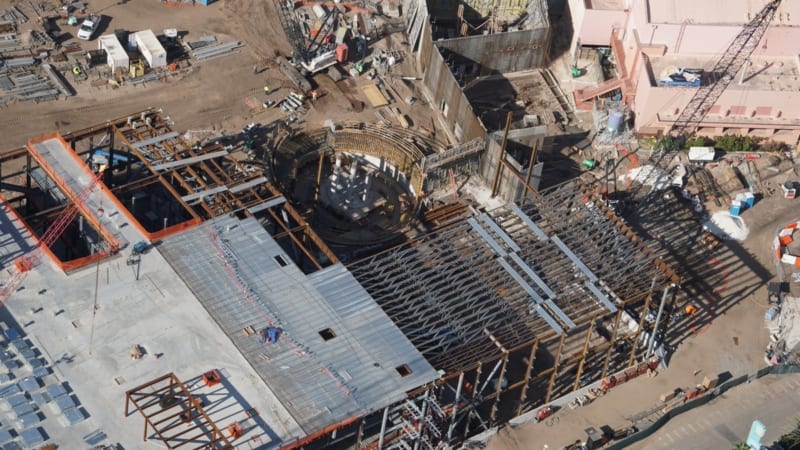 While we still don’t know too much about Battle Escape, it seems possible there will be two levels to the attraction as there’s currently an opening and landing coming out from the second floor: 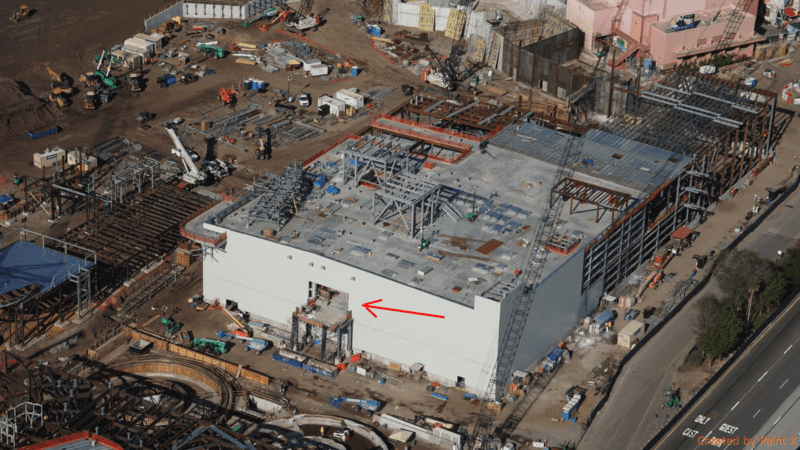 Over to the Millennium Falcon attraction you can see what is probably going to be the entrance to the queue: 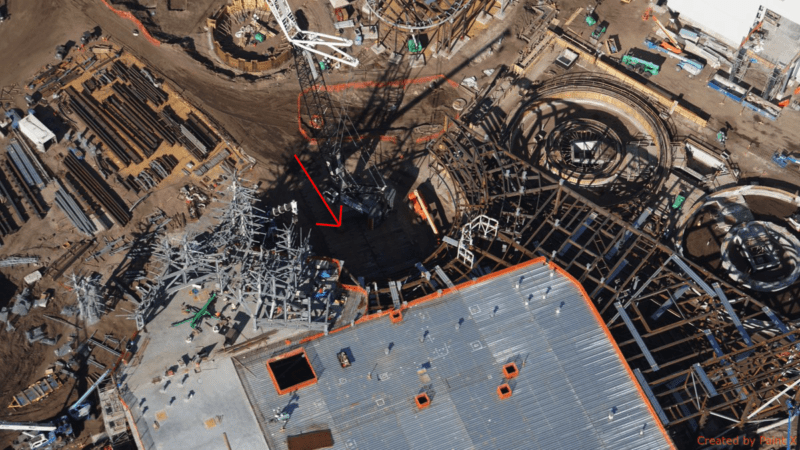 A further up shot gives you a look at the architectural elements on top of the building which will support the mountain-like theming above. 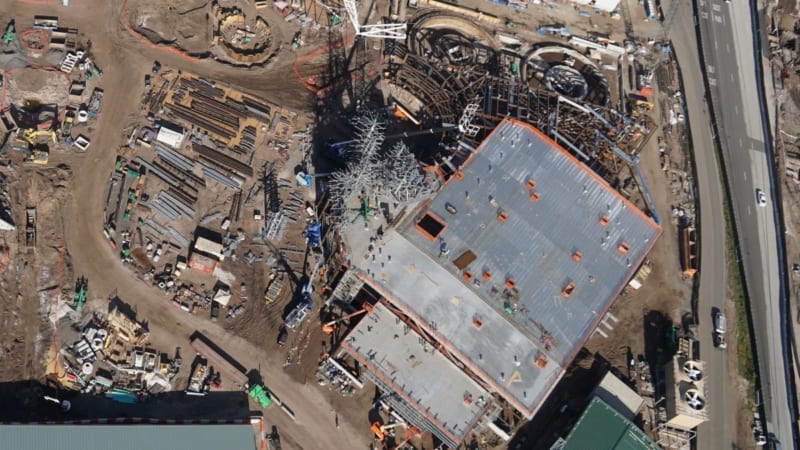 You can also see more of the Millennium Falcon attraction foundations being installed: 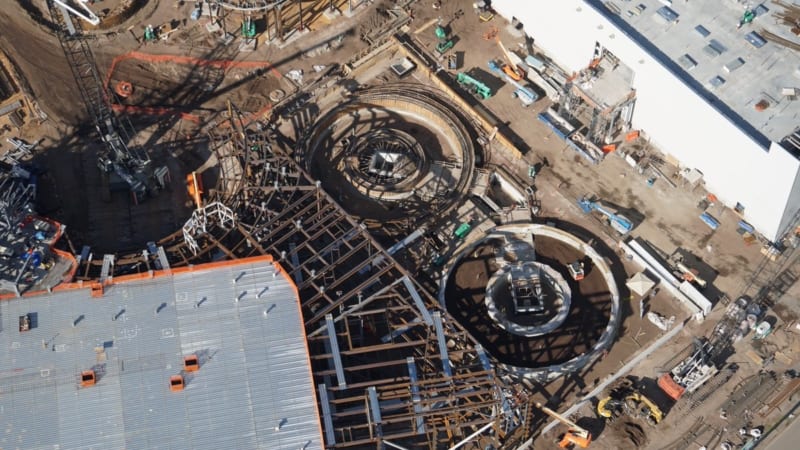 Now in the middle of Star Wars Galaxy’s Edge near the Battle Escape attraction you can see a new building starting to rise from the ground: 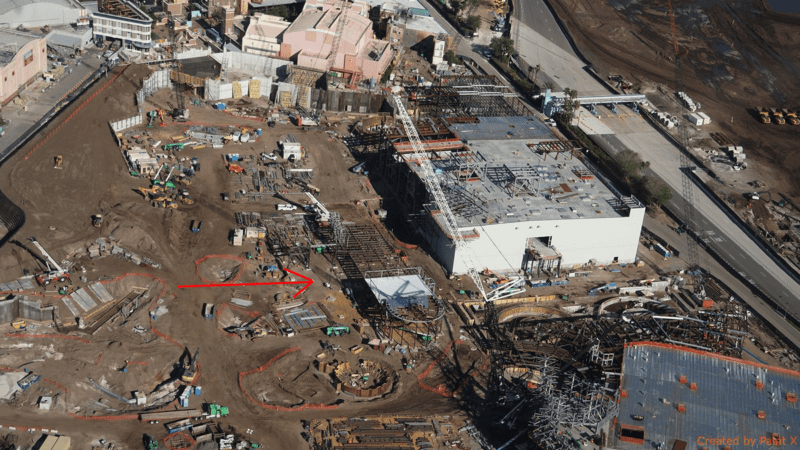 No idea what it is yet, but you know Disney is going to put some nice Star Wars merchandise shops on the exits of the attractions so the proximity is close enough to be that. 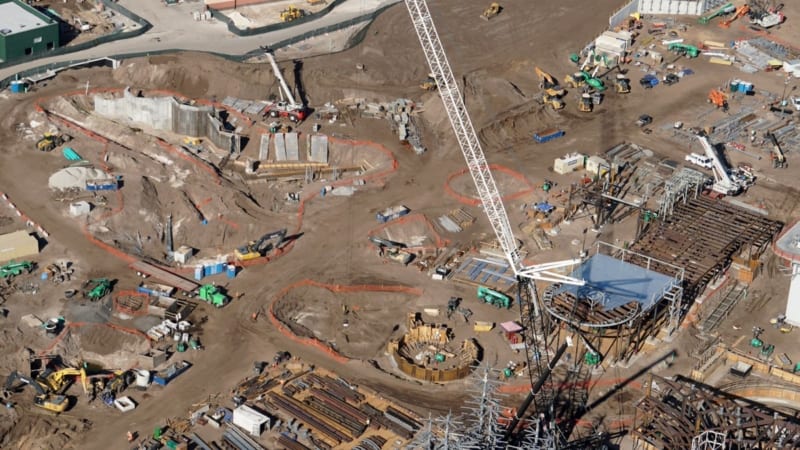 Time is flying by and with this last Star Wars Galaxy’s Edge Construction Update we’re roughly at a 1 1/2 to 2 years away from the land being open.  With the attraction buildings really taking form, we should start to see more support buildings coming up, including restaurants which we still don’t know about yet.

Also unknown is what Disney will do with the Star Wars Launch Bay once Galaxy’s Edge opens up.  Are they going to scrap it all-together or move it inside Galaxy’s Edge?  My thought is that it shouldn’t be outside but you don’t necessarily need to move the whole thing to Galaxy’s Edge either.  A nice character meet and greet of some sort is needed, but you probably won’t need a space as big as the current one seeing as guests will now be inside a real-living Star Wars Land, and not just in a museum.

No word yet to a specific date, but the Hollywood Studios version should be open sometime in 2019, with the optimists hoping for a late-Summer opening, but it could be in the fall too.  Stay tuned for more updates as soon as we have them!

I want to know what you think about the Star Wars Galaxy’s Edge construction update for November 2017.   Do you think Disney is doing enough to keep the ambiance inside Galaxy’s Edge?  Do you like the entrance tunnel?  Let us know in the comments section below!