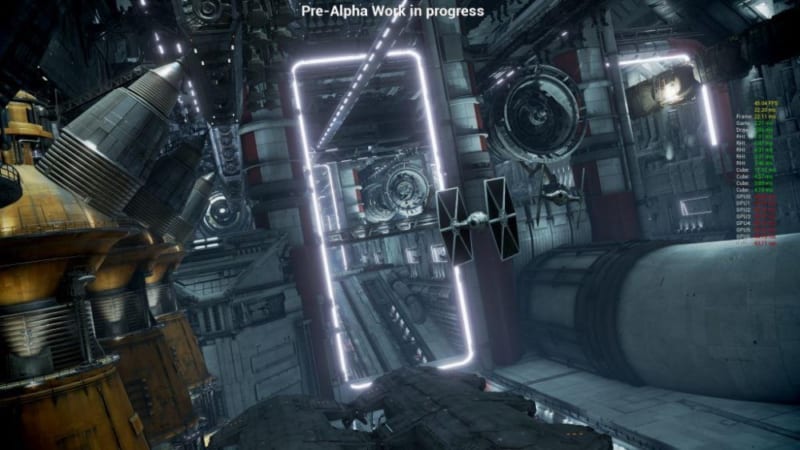 This picture was taken from a video sequence created by ILMxLAB, showing the detail and immersion that the attraction will offer.  This is ground breaking technology that Walt Disney Imagineering and NVIDIA are developing, and according to them, five projectors will be synchronized to take the riders through the world of Batuu on Galaxy’s Edge.

Quadro Sync synchronizes five projectors for the creation of dazzling ultra-high resolution, perfectly timed displays to fully immerse the riders in the word of planet Batuu.

“We worked with NVIDIA engineers to use Quadro-specific features like Mosaic and cross-GPU reads to develop a renderer that had performance characteristics we needed,” says Bei Yang, technology studio executive at Disney Imagineering. The attraction uses a “single BOXX chassis packed with eight high-end NVIDIA Quadro P6000 GPUs, connected via Quadro SLI.  Using the eight connected GPUs allowed us to achieve performance unlike anything before.”

Don’t worry if you don’t understand all that tech jargon, I think it translates to: “It’s going to be seriously awesome!”   As if I wasn’t already through-the-roof-excited for the Millennium Falcon attraction, I just got even more excited!!

Check out my latest Star Wars Galaxy’s Edge Construction Update to see how the Battle Escape attraction entrance and exit will be set up.

I want to know what you think about the new Millennium Falcon Attraction ride image.