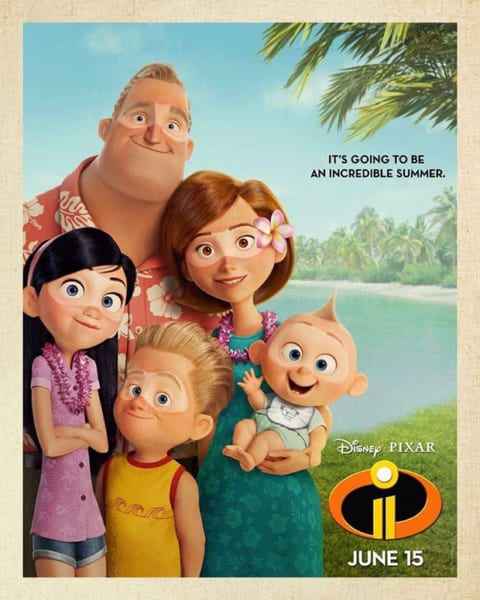 We’re eagerly awaiting the Disney-Pixar film Incredibles 2 later this summer, but to hold us over, the Disney-Pixar team has just released a new Incredibles 2 poster.  On the poster you see the Parr family on vacation…or are they.  Those mysterious tan lines on their faces sure don’t look like they’ve only been going to the beach.  They are trying to be a normal family, but we know that’s impossible to do!

If you haven’t seen the Incredibles 2 trailer yet, it looks great!  It looks like we are finally going to discover baby Jack-Jack’s powers!

Incredibles 2 is absolutely one of the films we are most looking forward to seeing in 2018 and it hits theaters June 15, 2018!

The Parr family will be back in theaters on June 15, 2018, with the highly-anticipated Disney•Pixar film Incredibles 2. The marketing team behind the film has done a great job to ramp up the excitement through teaser trailers and movie posters. Disney•Pixar recently released a new poster for the film, which features the Parrs on a tropical vacation. The somewhat subtle nod to the Parr family’s superhero abilities is the lack of suntan where their superhero masks fit over their eyes.

I want to know what you think about the New Incredibles 2 Poster.