Though the permits don’t give us too much information we can surmise a few details that help in understanding the timeline for the Tron coaster construction.  The permit lists: “MK-2 Building Completion Package” as the name for the Tron coaster show building, and it also informs us that Whiting-Turner Contacting is the builder for the attraction building.  If that name sounds familiar it’s because Whiting-Turner has been involved in some major projects around Walt Disney World, having worked on Star Wars Galaxy’s Edge and the Star Wars Hotel. 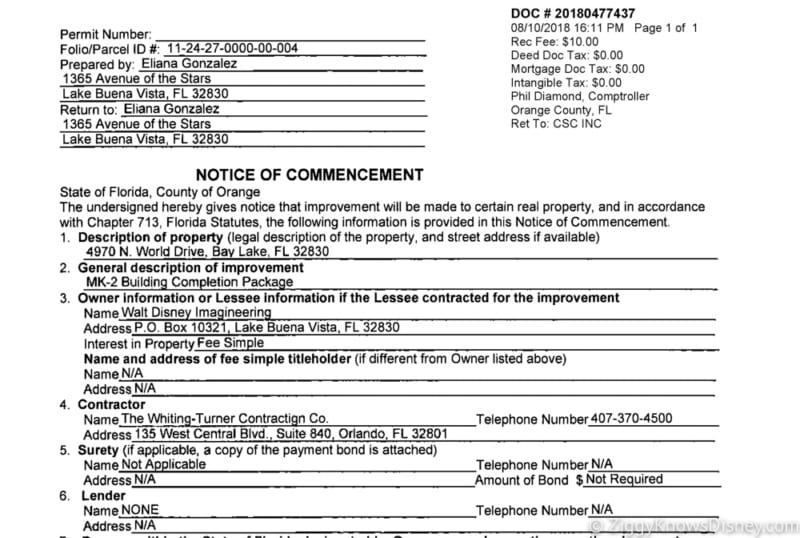 The Tron coaster show building will be built in stages and will probably follow a similar path as the Guardians of the Galaxy coaster in Epcot.  First the outside shell of the building will go up, then the attraction itself, and lastly the canopy (similar to the Shanghai version) will go around that.  These things aren’t covered in the permits currently filed by Disney.

We still don’t have an official name yet for the Tron coaster (the Shanghai version is: “Tron Lightcycle Power Run”) as Disney is holding off on making a final decision on that for a while.

The permits also don’t have an end date attached to them which means that these versions of the permits are good for the year.  We still aren’t expecting an opening date for the Tron coaster until late 2020 or early 2021.

It’s an exciting time for the Magic Kingdom and the Tron roller coaster project as Disney just announced last week the temporary closure of some attractions in the Magic Kingdom to make way for the Tron coaster, so things are really starting to pick up speed now as we head towards the Walt Disney World 50th anniversary.