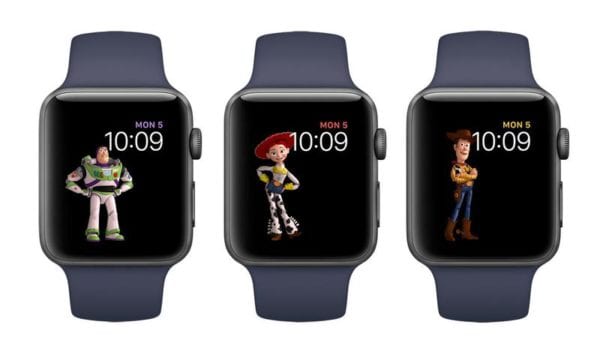 At the Worldwide Developers Conference Apple announced an interesting update for the Apple Watch, including Disney characters.  Already Mickey and Minnie Mouse’s faces are available for download and now there are going to be Toy Story faces on the Apple watchOS4 update.

The Toy Story characters included are: Buzz, Woody and Jessie.  The Apple watchOS4 operating system will be available this fall as a free update, so keep watching for that!

Immediately this made me think of the rumored acquisition of Disney by Apple and that the two companies are already playing ball together a bit, although things have been quiet over the last couple months.  It will be interesting though to see if more Disney/Pixar characters make their way to the Apple watch in the future.

I want to know what you think about the new Toy Story Faces on Apple WatchOS4.  Which is your favorite of the Toy Story characters?  What other Disney/Pixar series would you like to see come to Apple watch?  Let us know in the comments section below!