Last night during halftime of Monday Night Football Disney Released the Official Star Wars: The Last Jedi Trailer, and it was glorious!!  There were so many heart-pounding moments it was crazy!  But what did we see and what does it all mean?  There are many points in the trailer where they are trying to mislead to and make you think things are one way when in reality I don’t that’s what’s actually going to happen.  So I’m going to do my best to break it down in this Star Wars The Last Jedi Trailer Explained.

First though we got a look at the new Star Wars The Last Jedi Poster too: 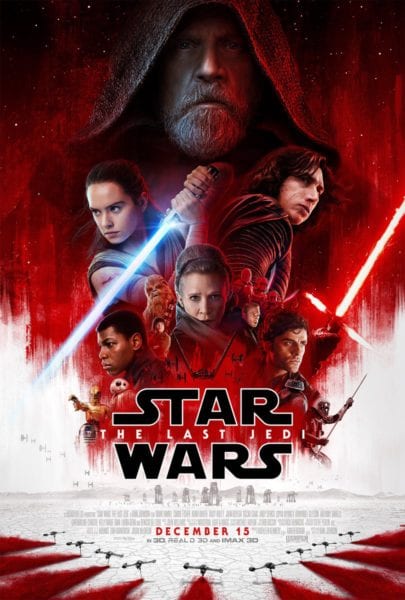 So the trailer starts off with a First Order Officer looking out onto a First Order base or Star Destroyer, at an army getting ready to assemble and attack, which we see later on.  You also hear a familiar, dark voice…SNOKE!  Yes he makes an appearance in the trailer, which I was hoping for but not really expecting honestly!  Anyways, Snoke is talking to someone and he says that when he found them he saw “raw, untamed power.”  This is a theme throughout the trailer as you can see both Kylo and Rey are exceptionally strong with the force, maybe stronger than any we’ve seen before.  It makes you think he’s talking to Kylo, but in reality I think it’s actually Rey.  You’ll find out why later on…

Next we see the scene of Gorilla Walkers attacking what we believe to be a resistance base.  These things are MASSIVE and super strong.  Look at all that armor on their legs.  I don’t think and snow speeders are going to be taking these things down!

We see more of the conflict going on inside Kylo Ren, which is a theme throughout the trailer.  Will he stay on the dark side or will he have a redemption story much like uncle Luke?

Throughout most of the beginning of the trailer we see Rey training with Luke on Ahch-To.  I think the majority of The last Jedi will take place here with Rey discovering what we hear are her tremendous powers:

This is a great moment when Rey hands Luke his old lightsaber.  His face is priceless like: “wth did you find that???”  Also after 30+ years that robotic hand is holding up pretty well I’d say.

While Luke is training Rey on Achc-To, we see that same mysterious book in the cave we saw in the last trailer.  We believe that it’s the ancient book that looks like the Journal of the Whills – a Jedi scripture that dates back to the original Star Wars mythology created by George Lucas.  If you remember back to Rouge One, Baze Malbus and Chirrut Imwe were members of an order known as the Guardians of the Whills.

Will we finally get a deeper glimpse into the history of the Jedi religion?  It seems that’s the reason why Luke came to Achc-To in the first place, seeing that this is the sight of the presumed first Jedi Temple.  What secrets has Luke learned since being here, and how will Rey respond?

Even from The Force Awakens it was clear that Rey was special, practically having zero training and yet being able to go toe-to-toe with Kylo Ren, who was much farther along in his training.  Yes he was injured, but it was impressive nonetheless.  Now with Rey seemingly breaking boulders with her mind, it’s scary to think what she could do when fully trained…

Which is exactly why Luke is afraid.  “I’ve seen this raw strength only once before. It didn’t scare me enough then, it does now.”  We see the famous scene from The Force Awakens with a building (probably Luke’s training center) on fire, which is the aftermath of Kylo Ren turning to the Dark Side.  Luke obviously didn’t see that coming, and fear the same now while training Rey:

We again see the internal struggle in Kylo Ren as he’s flying a fighter around a Resistance Cruiser which has his mom Leia onboard.  He’s now facing a decision to kill her much like he already did with Han Solo.  Will he go through with it?  I personally don’t think he has it in him and will either pull up at the last second or misfire…

One of the Porgs makes is onboard the Millennium Falcon with Chewy and gives us a little comic relief in an otherwise very heavy trailer:

You just knew that Finn and Phasma were going to go at it at some point in The Last Jedi, and Phasma probably didn’t take kindly to the fact Finn locked her up in Episode 7:

The Last Jedi is very reminiscent of the second installment in the original trilogy, The Empire Strikes back, and we again see a shot of the First Order army ready to do damage against the resistance base.  I think it will mirror Empire and the will almost completely wipe out the Resistance in this film, only for a few to escape and later reassemble in Episode 9.

Finally to me the biggest part of the Last Jedi Trailer was the appearance of Snoke!!  Much like he was able to turn Kylo in the past, he now is focusing on turning Rey too.  Somehow she ends up in his throne room, and he is doing his best to convert her.  Will she be able to resist unlike Kylo?

We still don’t know Snoke’s origin, where he comes from or how exactly he got to power but I thought it’s interesting he’s continued on the tradition of Palpatine before him in keeping the Imperial Royal Guards at his side.  We saw them in Rogue One with Vader, and they’re hear again with Snoke.  Director Ryan Johnson has said we will learn as much as we need to about Snoke in The Last Jedi, and that’s what I’m looking forward to the most!

Yeah there’s also that thing about Rey’s backstory which we’ll be getting to as well!

In this scene the trailer makes it look like Rey is looking for her place in the galaxy and asks Kylo for help.  I don’t think these two shot are actually connected in the film, but just put there to make us think she is turning over.

Overall I really liked the trailer, it had me on the edge of my seat wanting to know more.  I loved the fact that we saw Snoke in it as well.  The one part that really stood out to me was when Luke said: “This is not going to go, the way you think.”  So whatever happens, it promises to shock and surprise us all.  The Last Jedi is out in theaters Dec, 15th 2017!

I want to know what you think about The Last Jedi Trailer.  Did you like it overall?  Do you think Rey will turn to the Dark Side?  Will Kylo kill Leia like his father?  Let us know in the comments section below!