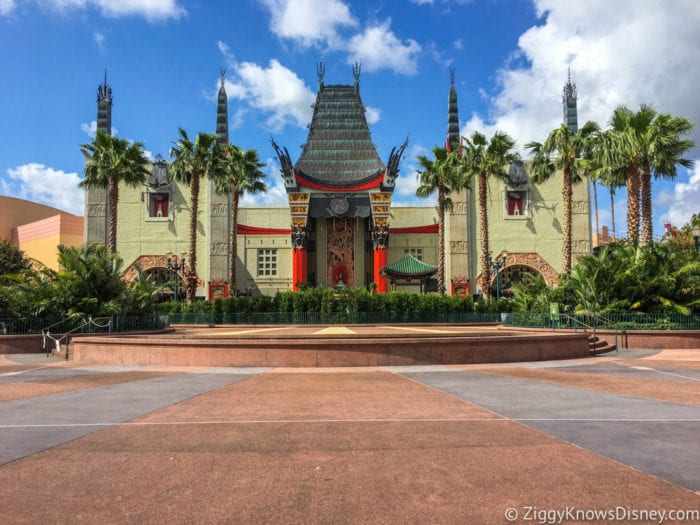 Over the Summer you may have noticed that the stage in front of the Chinese Theater in Disney’s Hollywood Studios went missing for some weeks.  That’s because Disney was trying to install a Mobile Stage for the Star Wars: A Galaxy Far, Far Away show, instead of the semi-perminant one that’s currently being used..  Disney in the short time wasn’t able to find a solution to the problem, so they brought the old stage back out and used it the rest of the Summer.  Now they’re working on another Star Wars A Galaxy Far Far Away mobile stage, and the show will be closed from October 10th to October 22nd.

Having a mobile stage instead of the permanent one is really ideal, 1. because it’s an eyesore and ruins the view of the theater always being there, and 2. it will allow better viewing opportunities for guests during the different nighttime light and fireworks spectaculars.  In order to make up for the loss of the show during these 2 weeks, you can expect to find the Star Wars characters that are normally included in the Star Wars: A Galaxy Far, Far Away show to be available in Character Meet and Greets in the park.  That means more Vader hopefully!

If there are any more changes to the schedule including delays in bringing the show back we’ll let you know!

I want to know what you think about a Star Wars A Galaxy Far Far Away Mobile Stage coming to the park.  Do you think it’s better to have a mobile stage than a fixed one?  Let us know in the comments section below!

Bob Iger Resigning in 2019, Who Will Replace him as CEO of Disney?
← Previous
RUMOR: Is a Spider-Man Attraction Coming to Disney Parks?
Next →
Click here to cancel reply.