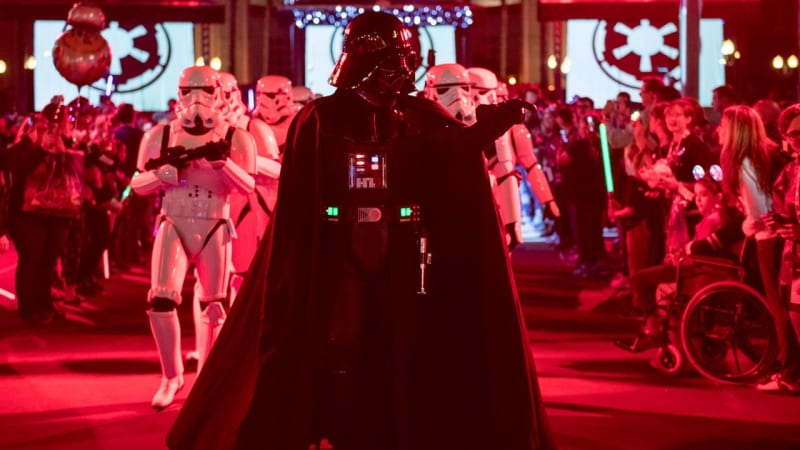 If you thought that Star Wars Galactic Nights was a one-time-a-year event then guess again because it’s coming back!  Since it has been such a big hit, Disney is bringing the Star Wars Galactic Nights back in May for a special event.  If you don’t know what the event is, it’s my favorite ticketed nighttime event in any of the Disney Parks, and Galactic Nights celebrates everything Star Wars with exclusive merchandise, photo opportunities, character encounters, a light projections show and more.

This is a Star Wars fan’s dream, and it’s all happening May 27th, from 7pm – Midnight.

The latest event was in December and a total blast!  One of the best parts was the info we received on Star Wars Galaxy’s Edge, including a whole Fleet of X-Wing Fighters coming to Galaxy’s Edge!

Here’s just a sample of some of the things we’re looking forward to this time:

I can’t wait for this Star Wars Galactic Nights event in May and I can see this becoming a semi-annual event from now on.  Disney hasn’t given any prices yet but for the last Galactic Nights event in December tickets were $129 plus tax for adults, $124 plus tax for ages 3-9, so they should be similar this time around too.  We’ll let you know as soon as we have more information regarding ticket prices and when tickets go on sale.  See you there!

I want to know what you think about a Star Wars Galactic Nights Special Event Coming in May.  Have you been to Galactic Nights before?  What was your experience?  Let us know in the comments section below! 🙂

Heads Falling Off Animatronic Figures in Disney Parks Around the World
← Previous
RUMOR: Is Be Our Guest Switching to Signature Restaurant?
Next →
Comments are closed.