If the opening of Pandora: The World of Avatar was a clue last year,  Toy Story Land is going to have a ton of people flooding to its attractions when it opens up on June 30th, 2018.  In order to help ease some of the wait times in the park, it looks like there are going to be New Hollywood Studios FastPass+ Tiers for Hollywood Studios for the opening of Toy Story Land. (Update): This story has been confirmed and FastPass+ Reservations for the Toy Story Land attractions are now available to WDW Resort guests.

According to MrInfinity on the Dis Boards, he has already booked his FastPass+ reservations for the attractions in Toy Story Land.  How is that possible seeing as we are still more than 60 days out from the opening??  Remember back a couple months ago when Disney broke the news that Club Level guests would have more FastPass+ privileges?  One of those perks is FastPass+ reservations 90 days out.

While making his reservations it looks like a new FastPass+ tier system will be in place for Hollywood Studios, and it breaks down something like this: 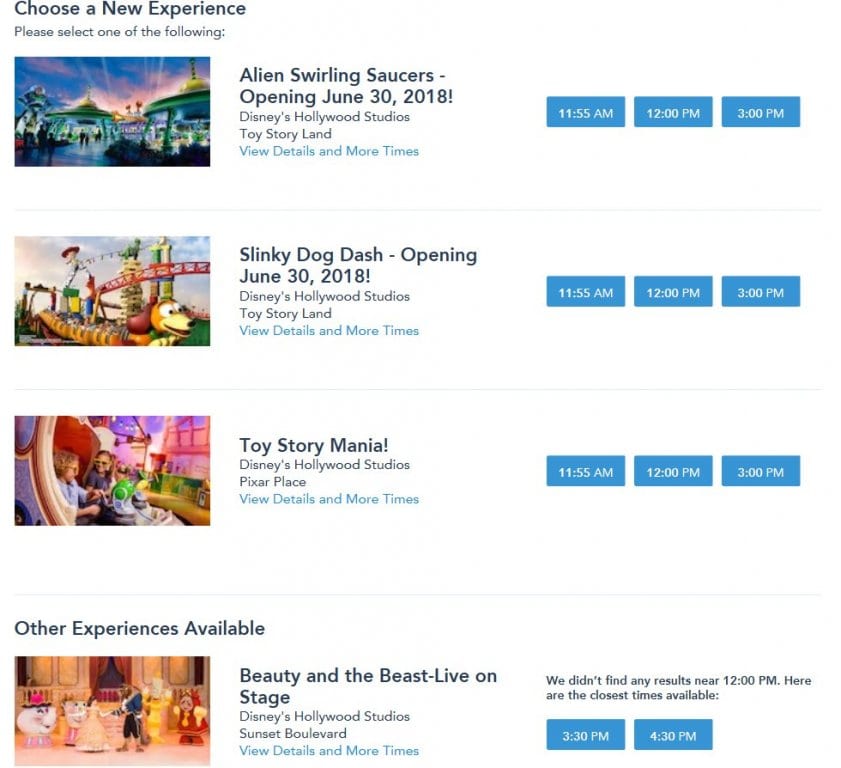 If you aren’t familiar with how the FastPass+ Tiered system works, it only allows you to book one Tier 1 attraction at a time, theoretically limiting guests from just booking up all the most popular attractions.  For Tier 2 attractions guests can book multiple ones no problem.  This is a significant change and that means that guests won’t be able to make FastPass+ reservations for all the Toy Story Land attractions, but will be forced to choose only one of them.  This is also a change for Rock ‘n’ Roller Coaster which goes down from Tier 1 to Tier 2.

You can read my in-depth Toy Story Land FastPass+ Strategy Guide to help you get the best of your visit.

This will obviously get shaken up again once Star Wars Galaxy’s Edge opens up next year and both the Millennium Falcon and Battle Escape attractions will no doubt get added into the Tier 1 category and probably at least Alien Swirling Saucers will go down to Tier 2 by then.  Mickey and Minnies Runaway Railway will also be a Tier 1 by next year when it opens.

Toy Story Land Opens June 30 and make sure to check out al the Extra Magic Hours throughout July and August to get the most out of your visit!

I want to know what you think about the new Hollywood Studios FastPass+ Tiers.