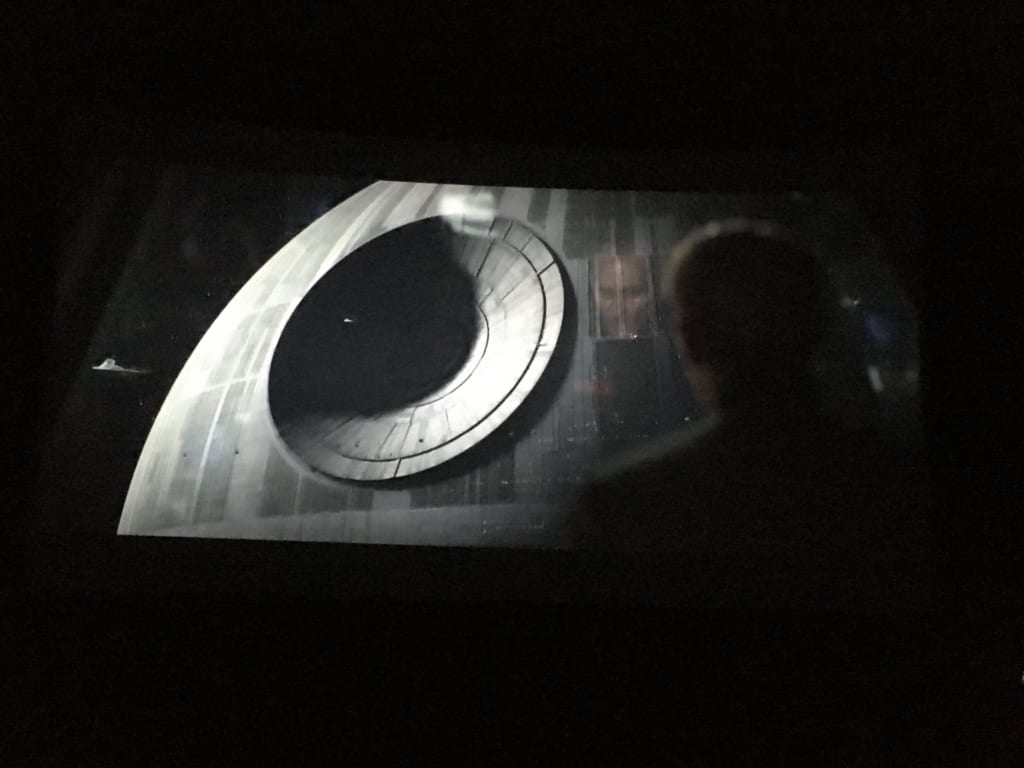 To any true Star Wars fan the word “prequel” is very controversial.  Yes Episodes 1-3 had a few nice moments, but mostly we think of blabbering Gungans, boring Pod Races, bad acting and they are left overall with a nauseous uneasy feeling in their stomachs.  So that’s what was going through my mind when Disney announced a couple years back they would be doing a Star Wars spin-off movie between Episodes 3-4, a story with a completely different focus with a different set of characters than the others.  What was the point really?  Episode 7 refreshed the entire series and gave us hope moving forward that it seemed useless to go back again.

Then throughout this year, even as late as this past summer, we were bombarded with rumors about how Disney was not happy with the progress of the film, and that many scenes had to be shot all over again.  Things were not looking all that positive for Rogue One.

Nonetheless being the huge Star Wars geek that I am I bought my tickets not knowing what to expect.  Now normally I watch the Star Wars films on opening night right with my friends and family back home in Connecticut.  But this time I was still in Italy so me and Stefania went for the December 14th Midnight Premiere.  I’m not sure she was as excited as I was about going all the way to Milan to see a film that started at 12:15 am, but she was a good sport and we made the trip there.  I feel like you aren’t really a Star Wars fan if you haven’t seen a midnight premiere at some point in your life.

After seeing the film, I realized how wrong I was.  My wife not falling asleep at a film starting past midnight tells you all you need to know about how good this movie is!   Rogue One: A Star Wars Story offers so much more that the other trilogies can’t, and make us see the Star Wars Universe in a way we never had before.  It also gave me so much more appreciation for the original: A New Hope and I now want to go back and watch it again to see what was connected in this newest addition to the Star Wars series. 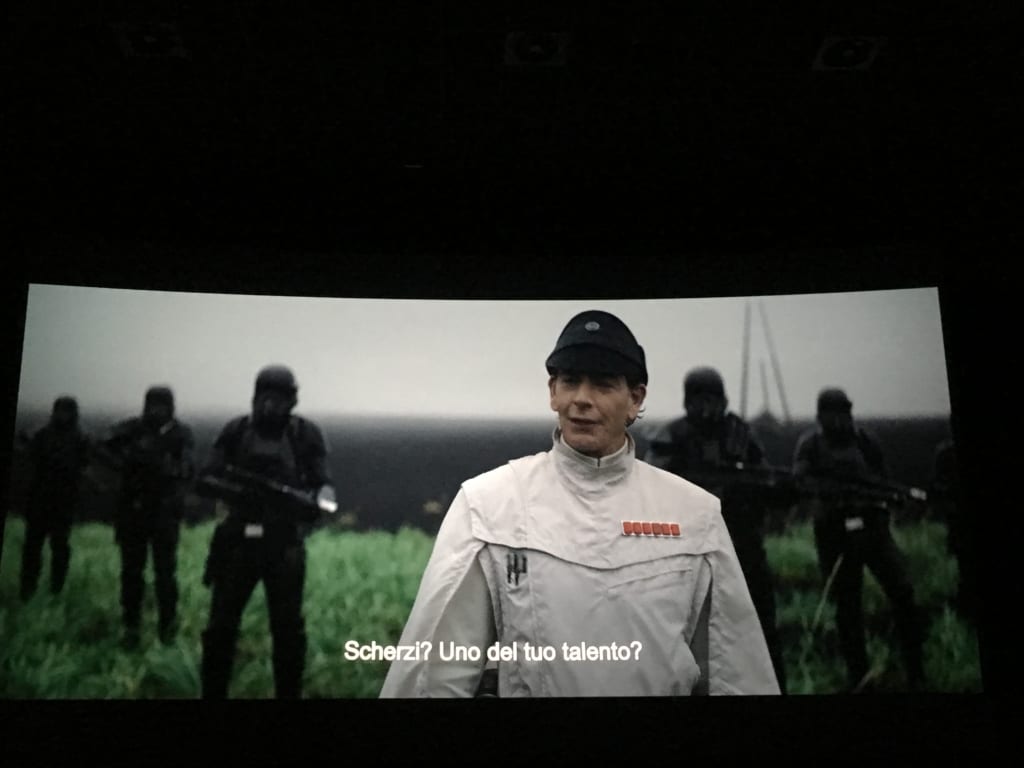 The story begins with Orson Krennic (Ben Mendelsohn) who is the directory of Advanced Weaponry for the Empire, coming down to capture Galen Erso and forcing him in the development of a new super weapon, The Death Star.  He is taken away and is forced to leave his family behind, including his young daughter Jyn (Felicity Jones).  This really sets the tone as we see that Jyn’s main motivation for helping the Rebel Alliance is for revenge suffered at the hands of the Empire.  She is then tasked with locating her father, who has purposely designed a flaw in the Death Star which can be exploited and used to destroy the gigantic battle station, but the plans but be first located and stolen first. 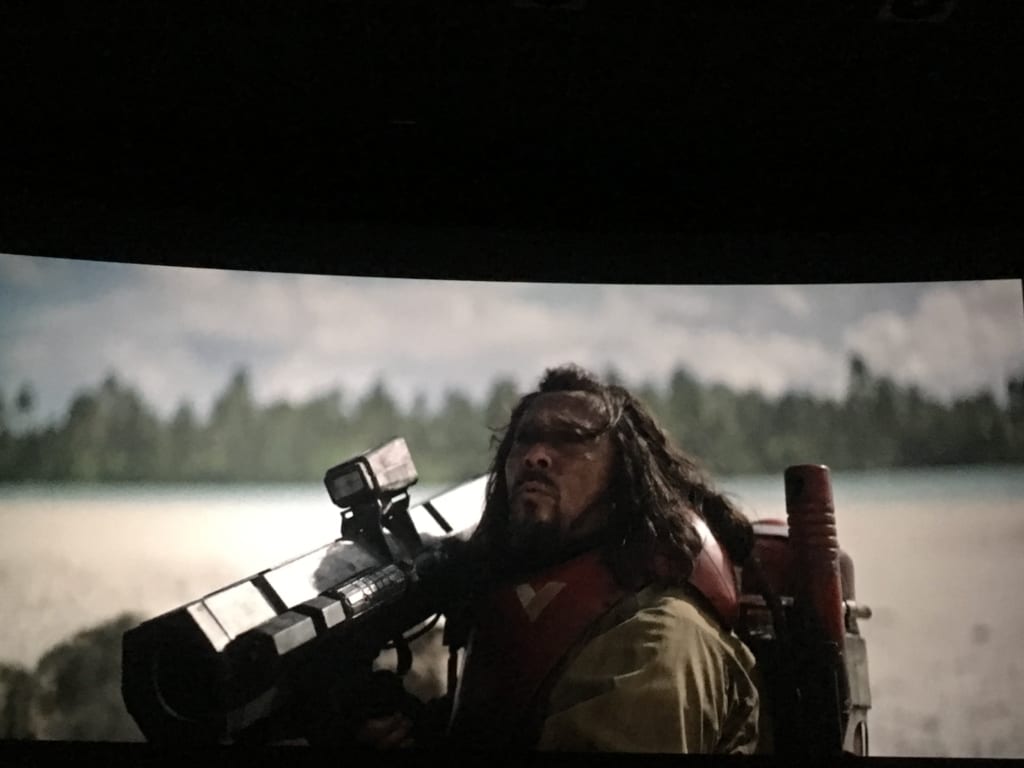 A team of lovable characters is formed lead by the quite ruthless Rebel intelligence officer Cassian Andor (Diego Luna), Ex-Empire pilot Bodhi Rook (Riz Ahmed), the blind but force sensitive Chirrut Imwe (Donnie Yen) and his fellow keeper of the old Jedi Temple Baze Malbus (Wen Jiang).  The last member of the team is probably the stand-out of the group, Imperial Droid-turned-rebel K-2S0 who offers the comic relief and strangely enough the most “human of all the characters,” which is ironic considering he’s a droid.  He’s sure to make you laugh a lot, even in moments that you normally wouldn’t.

One of my only complaints with Rogue One is that even though the actors do a great job portraying these characters, there is too little time to get to know them very well.  I feel like there is a lot to know about their backstories and why they are fighting for the Alliance.  For example what made Bodhi defect to the Rebels?  Ditto for K-2S0.  We know that Chirrut and Baze spend all their time hanging out at the Temple “playing Jedi” but why are they there and why do they feel it’s their job to protect the temple?  Why is Cassian so pissed all the time and what are the terrible things that happened to him in his past?  These are all interesting people with great stories to tell, and knowing more would make their suffering and plight throughout the movie all the more personal and emotional for the viewer, especially when lives are in the balance during the film’s climax.

Another negative is that is goes back and forth a lot, especially in the beginning, to places and people that make the film a bit confusing and not so clear.  There’s a lot of jumping around to places that ultimately are not really explained or explored after that, and it makes the first half or so of the movie a bit slow to develop and get going.  That could have been put together a bit better imo.

Also I have to ask: Where the hell is the usual Star Wars Opening Music??  They showed “A long time ago in a galaxy far, far away…” but then instead of the amazing intro music we have all grown to love, they go right into the scene.  So that left me kind of disillusioned off the bat. 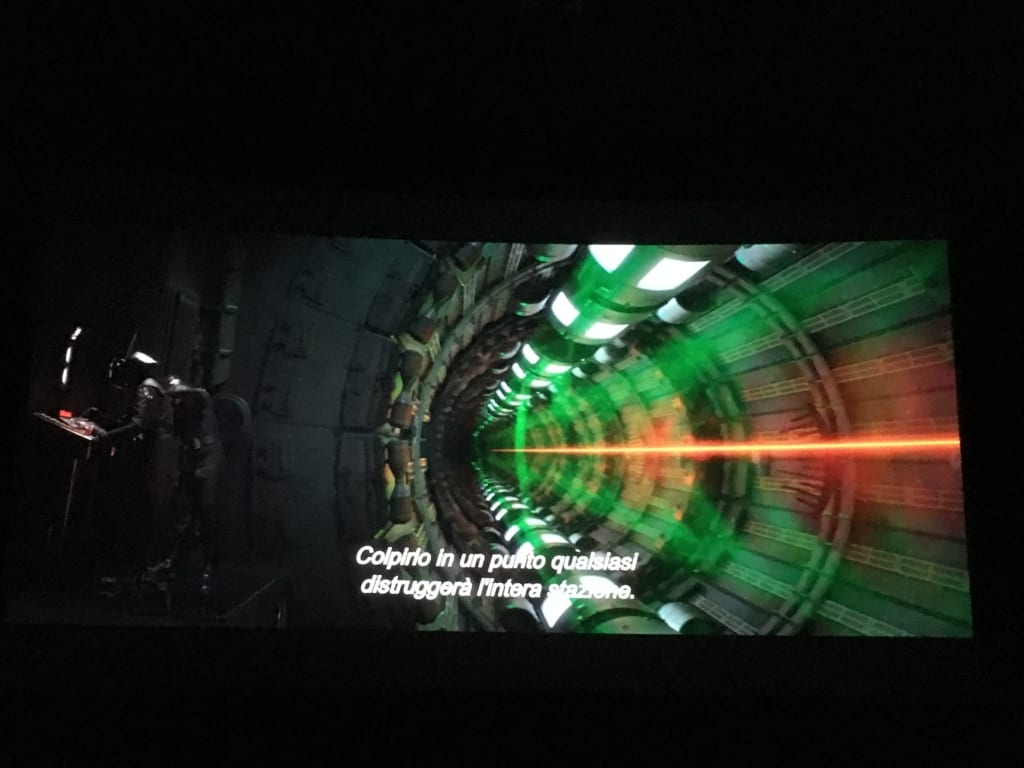 Those are really my only negative thoughts and overall Rogue One is an excellent movie and exceeded any expectations I could have had.  Rogue One delivers…and in a big way!  It shows us sides of Star Wars we’ve never seen before.  It also places the Rebel Alliance in somewhat of a grey light, with many of its members including main characters often finding themselves in moral dilemmas and forced to do things they don’t want to, but do for the good of the Alliance.  It’s a dark and gritty story, showing us characters in real situations, in a life and death struggle.  We see them help innocent people, only to see the same ones helplessly killed moments later.  This is a movie about suffering, moral dilemmas but ultimately hope, people coming together for a single cause, and even when it seems hopeless, even when facing sure death, they stand together to fight.  This is about people fighting for what they believe in.

This competes with “Revenge of the Sith” for the “darkest” Star Wars film to date, which is a good thing.  It’s a realistic and quite violent movie as well, with in-your-face camera angles that make the battle scenes really come to life.  Like something you’d see in Saving Private Ryan rather than a typical Star Wars movie.  I heard Disney toned down some of the fight scenes in the movie which makes me curious to see what the original cuts were like.  Not a movie you want to take young children to as some of the scenes will be a bit frightening to them.  Definitely made for adults. 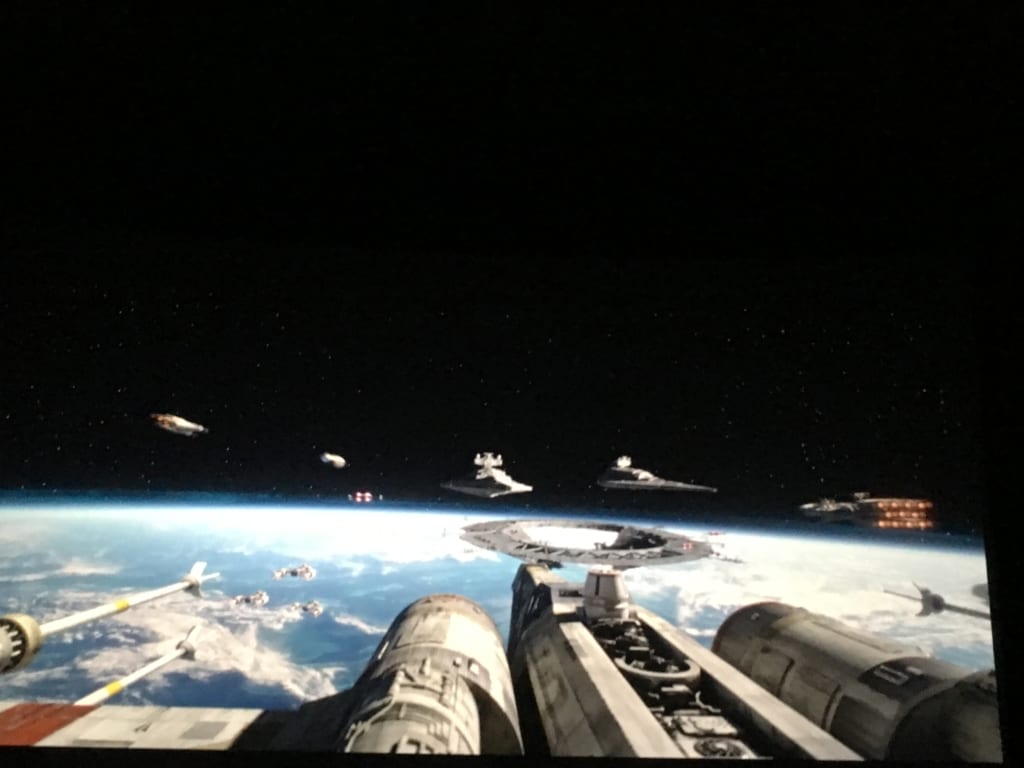 The visuals are stunning as well.  The battle scenes are incredible and will have your fan-boy inner self jumping for joy when you see the AT-AT Walkers storming down the beach being rained down upon from above by X and Y Wings in the final battle.  The beginning of the movie might be a little slow but the final 40 minutes of the movie are up there with the best battle scenes in any Star Wars film, encompassing a land-based battle with our main characters and an incredible space battle as well between the entire Rebel fleet and the a slew of Imperial Star Destroyers.  Admiral Ackbar’s Cousin even makes a cameo (I’m joking obviously, but it is another Mon Calamari general of some kind).  If this doesn’t bring you back to your childhood nothing will.

There are tons of easter eggs for any Star Wars geek, you can watch it over and over again and not notice everything.  There are a ton of Star Wars Cameos, X-Wing and Y-Wing Pilots from “A New Hope”, the loudmouth idiot that gets killed by Obi Won in the Canteen on Mos Eisley, the Admiral of the Death Star Tarkin, the Senator Organa and even a brief spot by Leia herself! 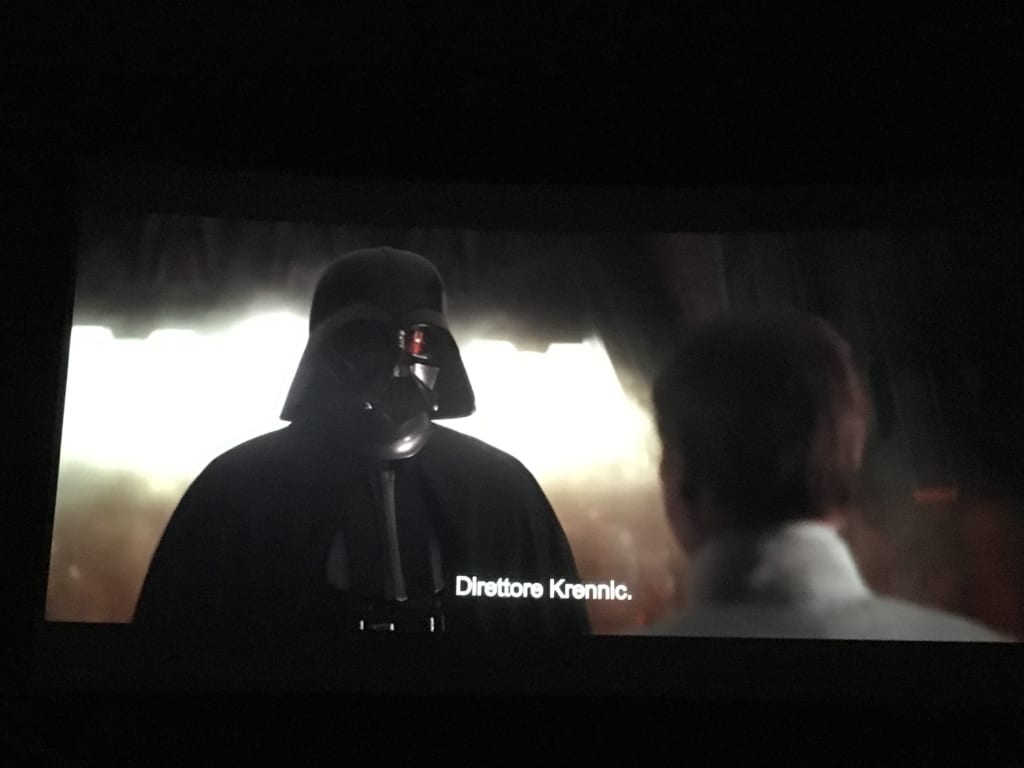 What everyone wants to know about the most is Darth Vader.  Some thought he would only have a very minimal role in the film, just throwing his name out there to get people to come see the movie.  While he doesn’t get a ton of screen time, the time he has he uses to the full.  The Sith Lord outdoes even himself in Rogue One, and at one point he literally had by jaw on the floor.  I won’t spoil anything, but he has one of the most awesome, bad-ass scenes I’ve ever witnessed and will leave no doubt why is the best villain in the history of the cinema.

Overall I really loved Rogue One: A Star Wars Story.  It was a keep-you-in-your-seat thrill ride that I’m going to go on again and again.   The whole thing is epic, visuals, music, great acting and tons of Star Wars Easter eggs for even the biggest fan.  You will never watch “A New Hope again in the same way as before, you will have so much appreciation for what was required to get those plans and ultimately destroy the Death Star.  The  Star Wars franchise is in great hands for the future and I can’t wait to see what the coming years are going to bring!

I want to know what you think about Rogue One: A Star Wars Story Review. What did you think of Rogue One?  Where does it rate compared to other Star Wars films.   Let us know in the comments section below! 🙂