This is a Toy Story Land Construction Update for April 2018.  We know that Toy Story Land is opening June 30th, but there still is a lot of work to be done in the next 80 days to get everything prepared.  That being said, every day you can see the progress going on in Toy Story Land, and it looks like the theming around the attraction part of the Slinky Dog Dash coaster is all but done.

Since our last update, we found out a whole lot of new information about Toy Story Land too.  We know that there is now going to be a brand new FastPass+ Tier System in Disney’s Hollywood Studios to make way for the new attractions.  Even some very popular DHS attractions have been bumped down to Tier 2 to do this.  We also say some of the theming elements for Alien Swirling Saucers arrive in Hollywood Studios last wee, which is cool since we really haven’t seen anything from the inside of the attraction besides the original concept art.

And lastly we got a look at some of the first couple items on the Woody’s Lunch Box menu, including some interesting Pop-Tart-like things for breakfast and a BBQ Brisket Melt for Lunch/Dinner

Of course we want to see all the new construction work happening, and thanks to @biorecontruct on Twitter, we have some awesome aerial shots of Toy Story Land and the surrounding construction progress!  Let’s take a look!

Just to give you an idea of how much can happen in less than a year, this is a current shot of Toy Story Land in Disney’s Hollywood Studios: 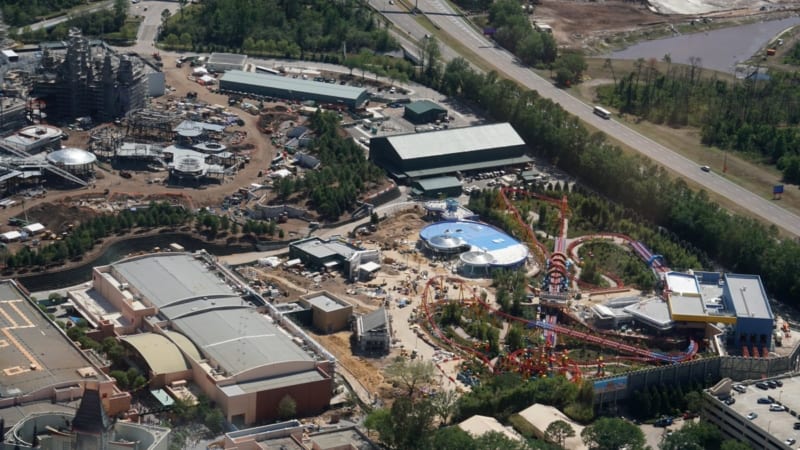 Here’s a shot from May 2017, just 11 months ago.  Things have really progressed. 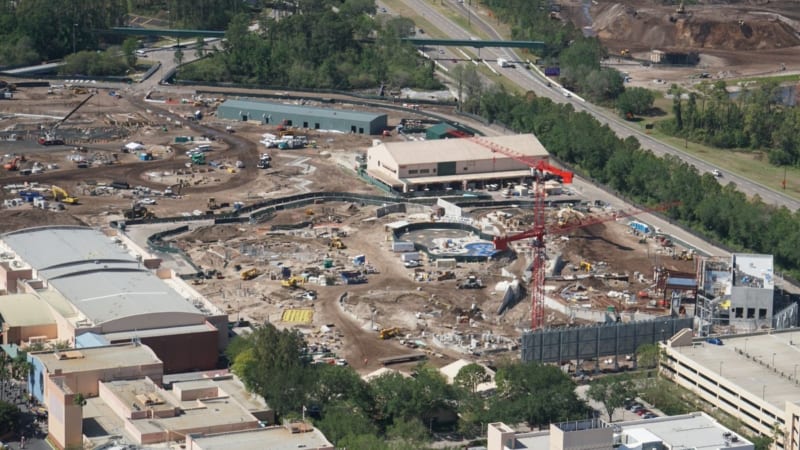 Of course the workers need to go fast like Dash from the Incredibles if they are going to make the June 30th deadline, but they should be able to do it!

Next up we can see the Entrance to Toy Story Land and some theming elements like trees being added in.  This will be the first place guests see when entering the new land so first impressions have got to be good! 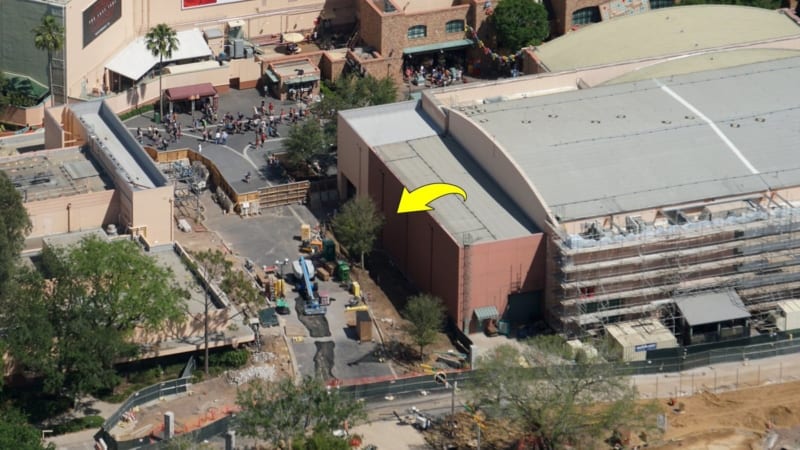 Next we can see the progress on the Toy Story Midway Mania queue.  This of course is now on the inside of Toy Story Land instead of the other side of the building off Pixar Place, which only makes sense.  There are going to be lots of new interactive elements to the queue, so I’m very excited to step inside and see when it opens: 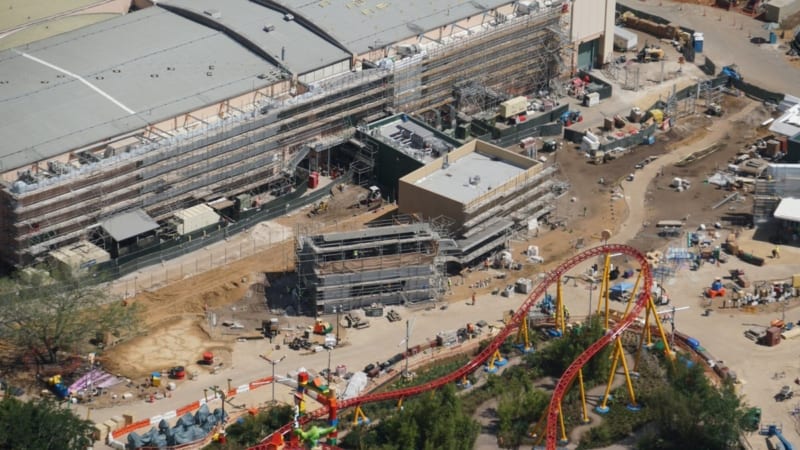 Around the other side of the building we can see the Midway Mania Exit indicated by the top arrow, and the re-entry into Toy Story Land where the bottom one is: 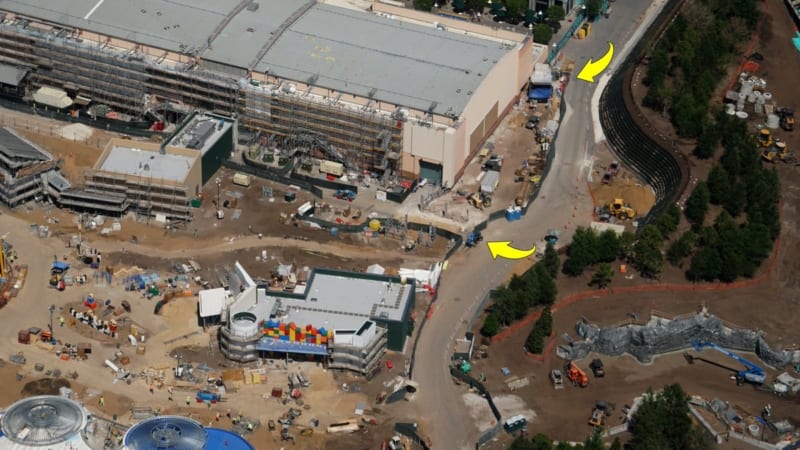 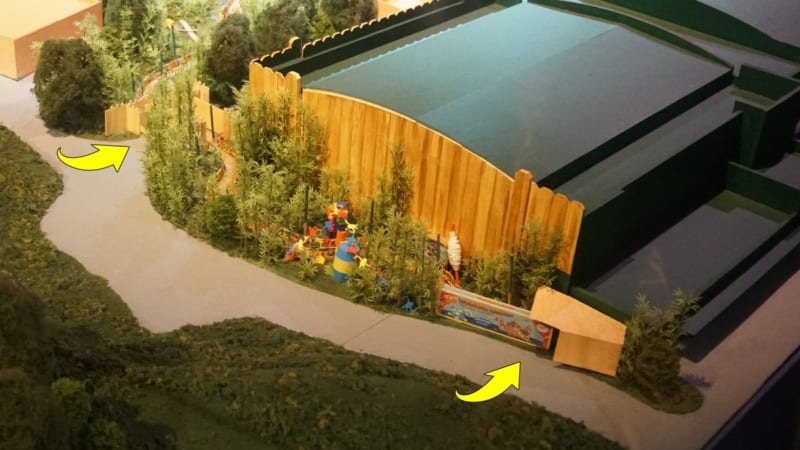 Some of Toy Story Land’s theming elements can be seen at the arrow, where there is a Tinker Toy Lamp Post already installed.  On the right you can see the progress for Woody’s Lunch Box, the land’s only dining option: 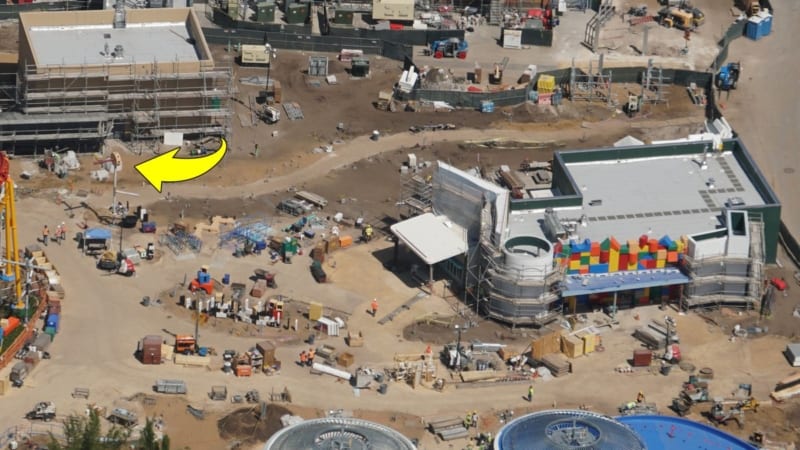 Moving over to Alien Swirling Saucers you can see the backside of the attraction and the arrow shows where the ride queue will enter and split off to two different ride platforms: 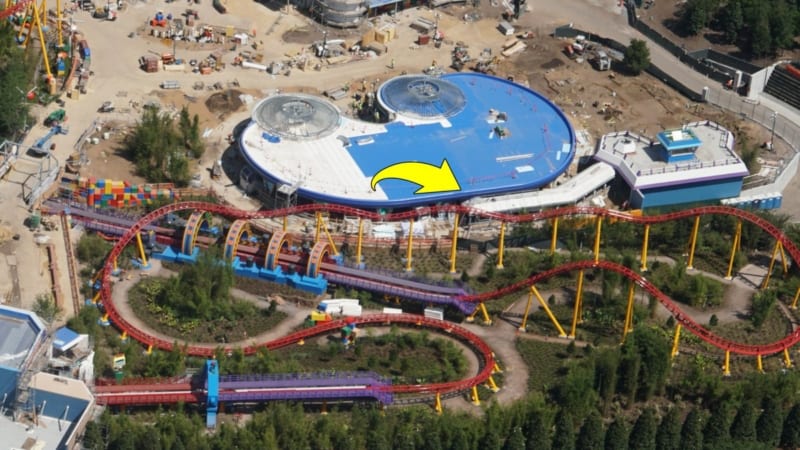 This, plus the overall progress of the attraction can once again be seen by looking back at a photo from 11 months ago.  You can clearly see the two ride platforms and where the queue enters the attraction: 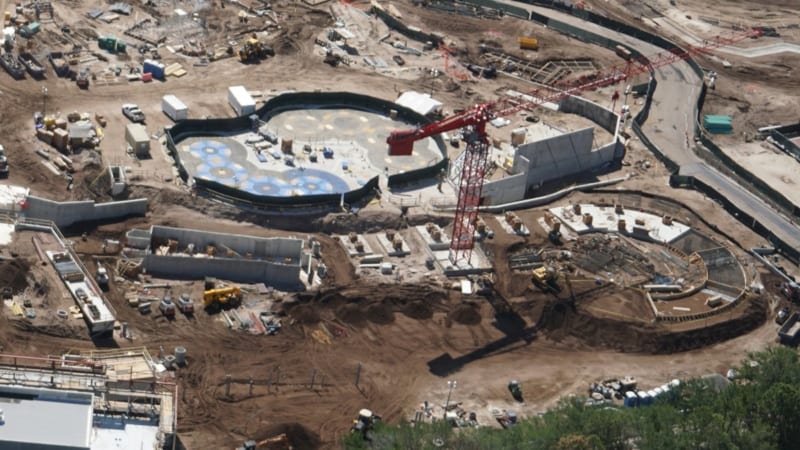 Over on the side of Alien Swirling Saucers you can see some green decorations being added to the walls: 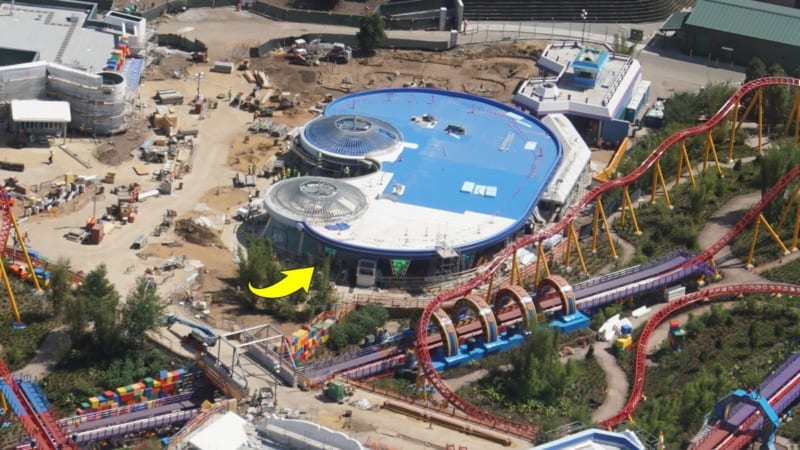 Lastly, as wee take a look at the Slinky Dog Dash coaster, we can see that basically all the landscaping and theming elements around the attraction have been installed: 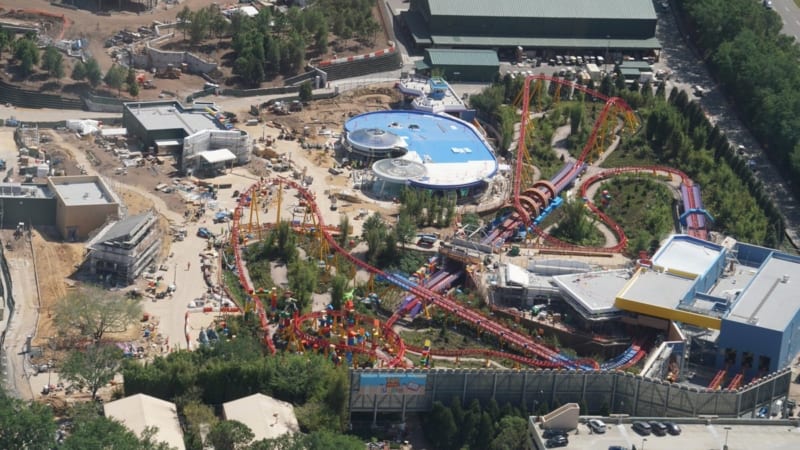 The work that’s left is on the station and queue for the attraction.  Here you can see work being done on the attraction’s entrance: 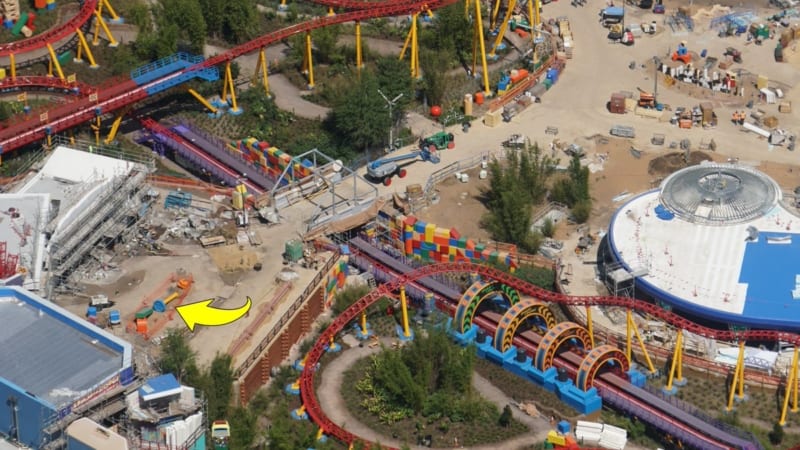 Here you can see the theming going up on the walls of the entrance: 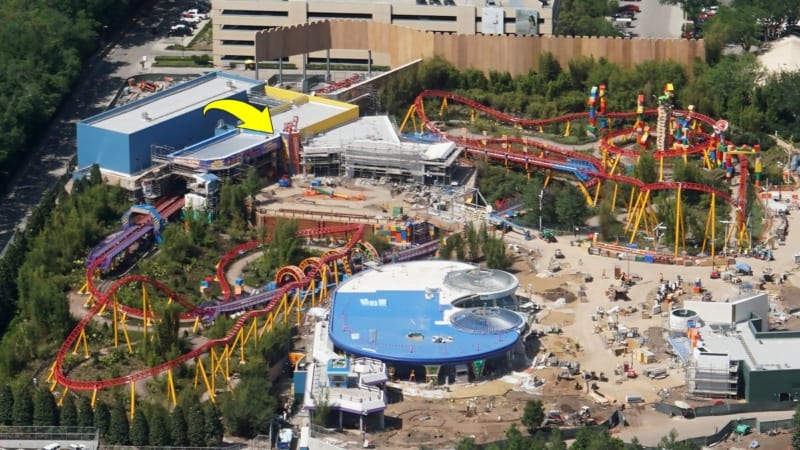 Around back we can see the Slinky Dog Dash service area and garage: 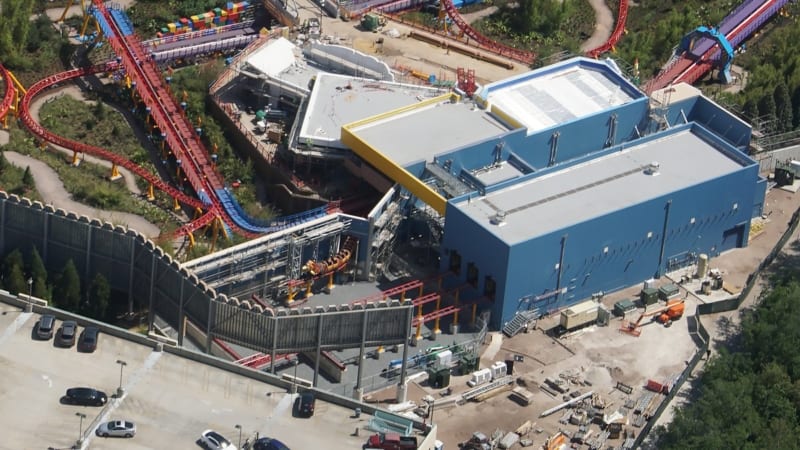 When the trains have to be worked on, they will be brought around back on the track leading out of the station and then there is a system in place to move the trains from the main track, back into the service area: 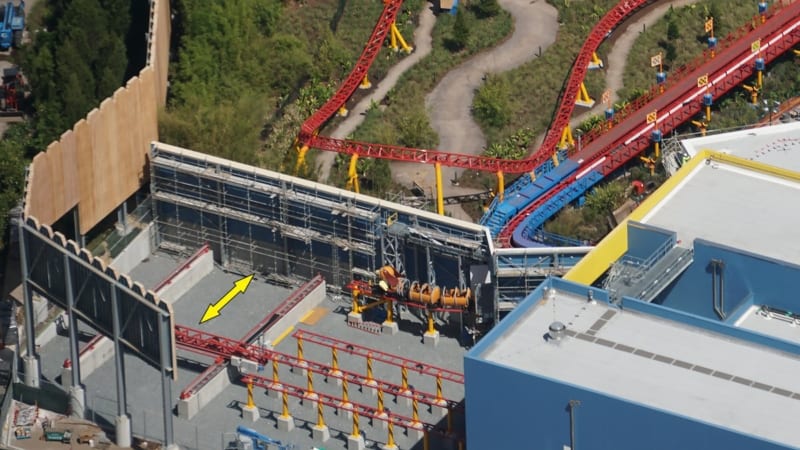 Lastly we can see the Hollywood Studios fireworks launch point from behind Toy Story Land: 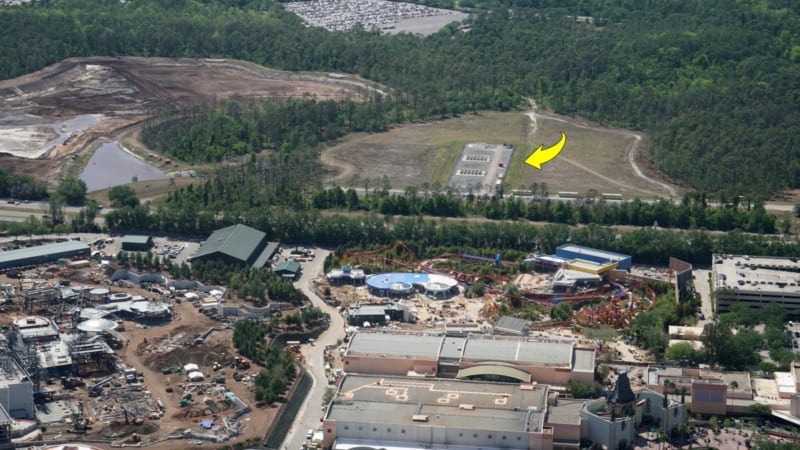 So far we’re at just over 80 Days till the opening so we’ll continue to bring you updates on what’s happening in Toy Story Land, and also live coverage from the opening on June 30th.  Check out the full prices for the Menu at Woody’s Lunch Box here.  We’re so excited we can hardly wait!  Don’t forget that FastPass+ Reservations for the Toy Story Land attractions are now available so check out my in-depth Toy Story Land FastPass+ Strategy Guide to help you get the best of your visit.

I want to know what you think about the Toy Story Land Construction Update for April.