This is a Disney Skyliner Construction Update for April 2018.  One of the most fascinating construction projects around Walt Disney World the last few months has been the Disney Skyliner/Gondola project.  Every day new support towers are rising from the ground and setting their footprint for the future routes which will transport guests to and from Epcot, Hollywood Studios and the nearby resorts.

The Disney Skyliner/Gondola, is really moving quickly and this transportation system will be instrumental in the success of Walt Disney World over the next decades.  That and it’s gonna be a blast to ride imo!  Since our last update, we’ve seen supports rise from the foundation of the Disney Skyliner station at Hollywood Studios, and now we have even more photos showing just how massive this project is.

We again have the pleasure to share photos from @bioreconstruct over on Twitter.  He always has great shot from the sky, while we remain cozy down on the ground!  ?  Let’s take a look at the progress around Walt Disney World!

So here we can see the Disney Skyliner station for the Art of Animation and Pop Century Resorts.  This station will be shared by both resorts and you’ll notice the station is being built out over the water, connected by a bridge: 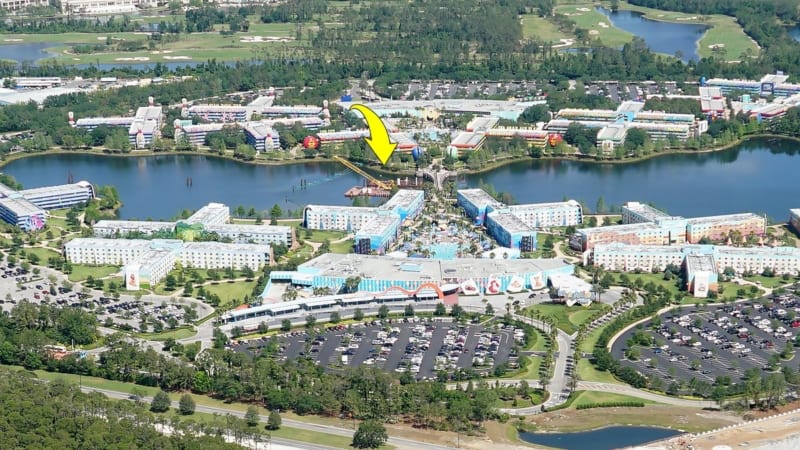 Leaving the Art of Animation and Pop Century Station we start heading over to the Caribbean Beach Resort.  Here you can see the trail of Disney Skyliner support towers leading the way there: 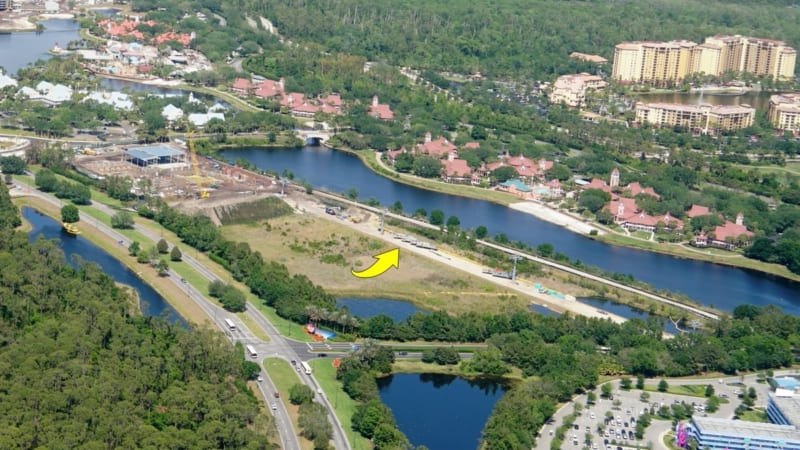 Aerial shot of those same Skyliner Support Towers.  There are two of them up here, but the yellow crane is poised to put up a third: 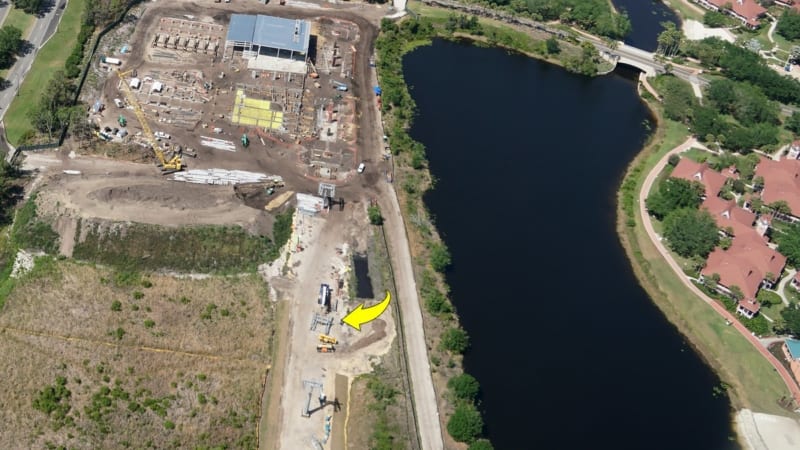 Here’s a close-up view of those towers: 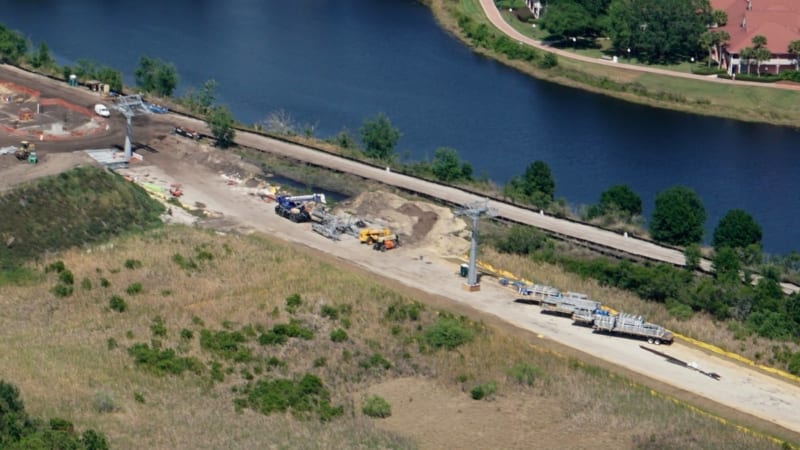 The Caribbean Beach Station will be the Main Hub of the Disney Skyliner/Gondola system, having transportation to any destination on the Skyliner route.  Guests will get off and transfer to the station they desire to go to: 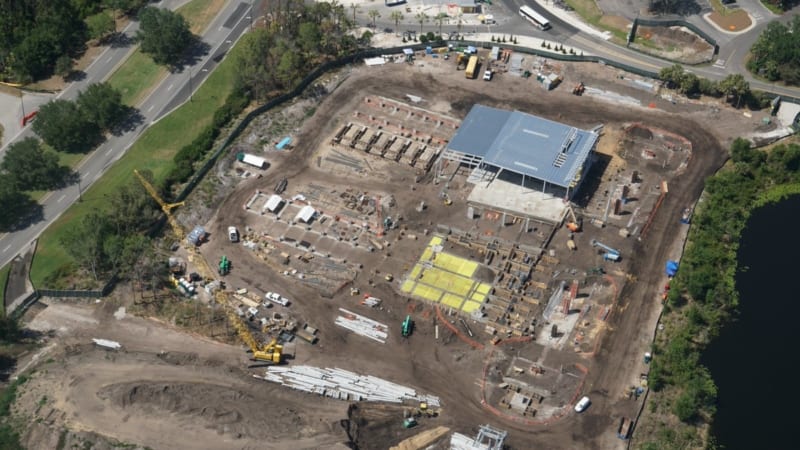 Speaking of Disney’s Caribbean Beach Resort, here’s an update of the Port Royale construction going on there: 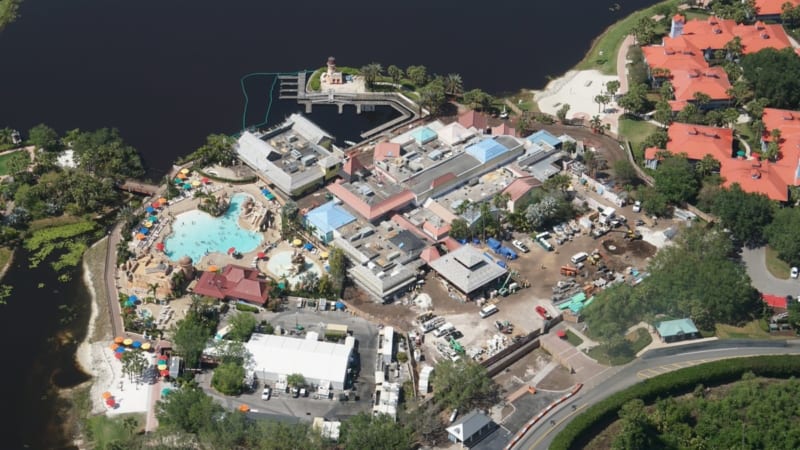 For example, from the Caribbean Beach station you can either continue up to Epcot, or make a detour here and head over to Disney’s Hollywood Studios through that clearing in the trees.  One of the support towers is being raise where the yellow arrow is: 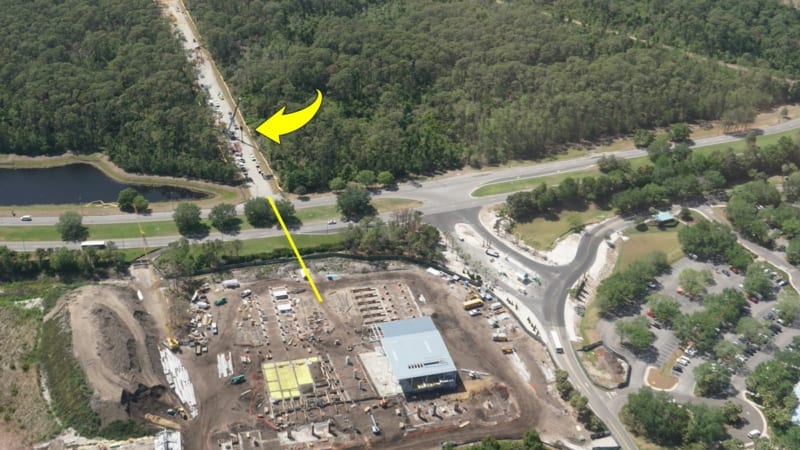 A further out shot of the Hollywood Studios route shows the Disney Skyliner heading over the trees, until eventually reaching the DHS parking lot.  Off to the right you can see the route leading to Epcot: 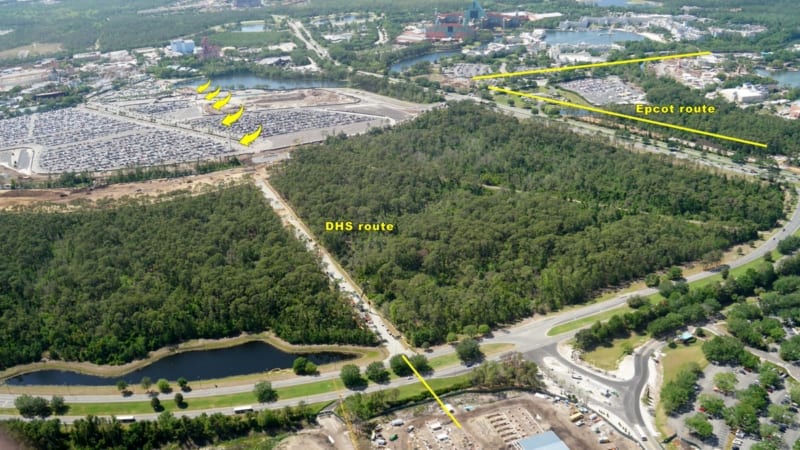 So once we get to the Hollywood Studios parking lot, there will be a series of support towers leading guests quietly and quickly over it all.  The yellow arrows indicate already existing towers.  The clearing on the edge of the forest is the New Entrance to the DHS Parking Lot: 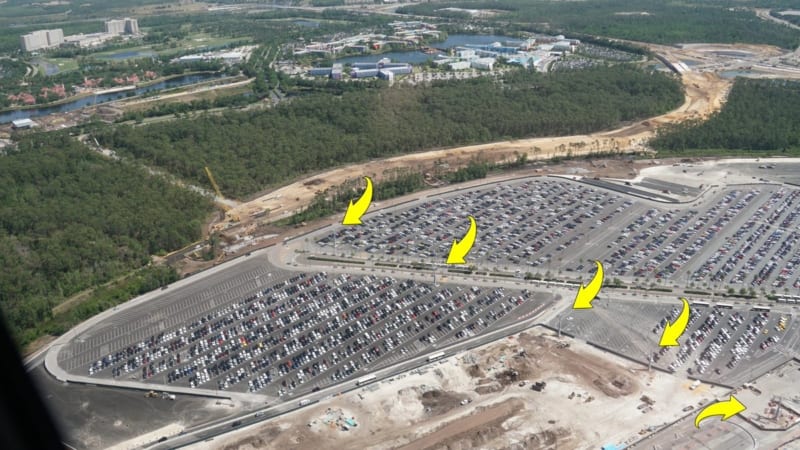 Series of Skyliner towers in place: 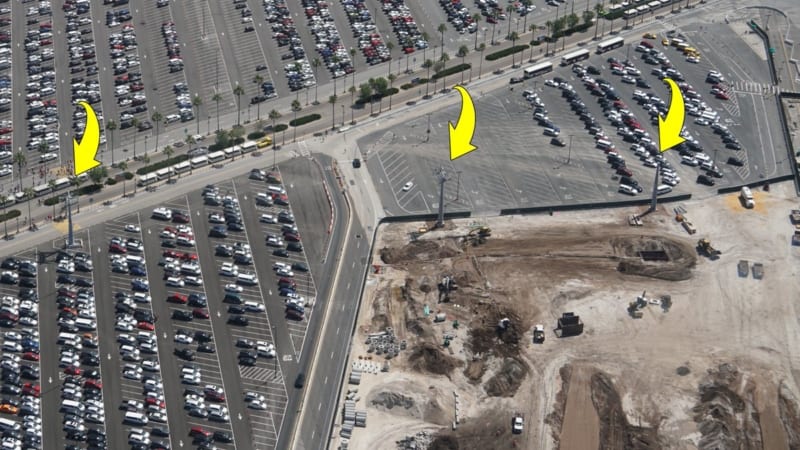 Here you can see the new Hollywood Studios Bus Plaza.  The style is similar to the Bus Plaza at the Magic Kingdom, and the walk is going to be similar with it being significantly farther than the old one here: 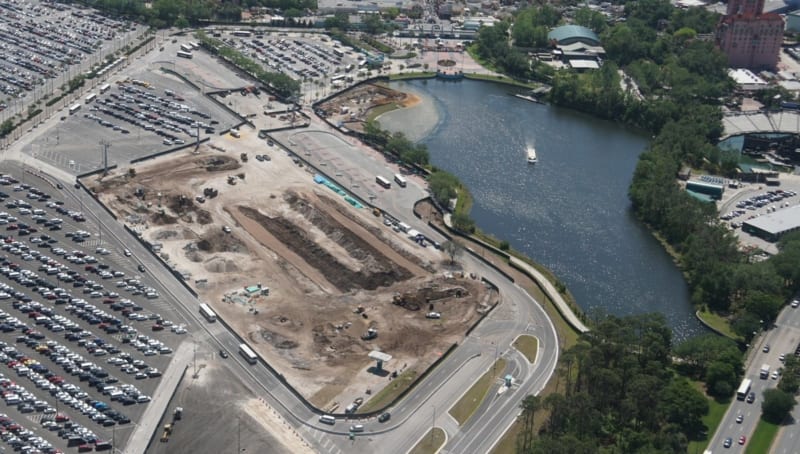 Here’s an overhead shot of the Disney Skyliner Station at Hollywood Studios.  You can see the foundation for the station and big support beams already in place: 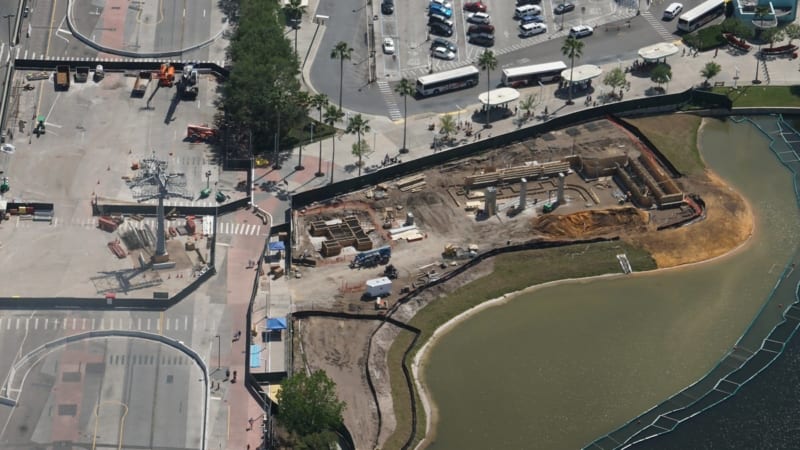 This is what it looks like from the ground: 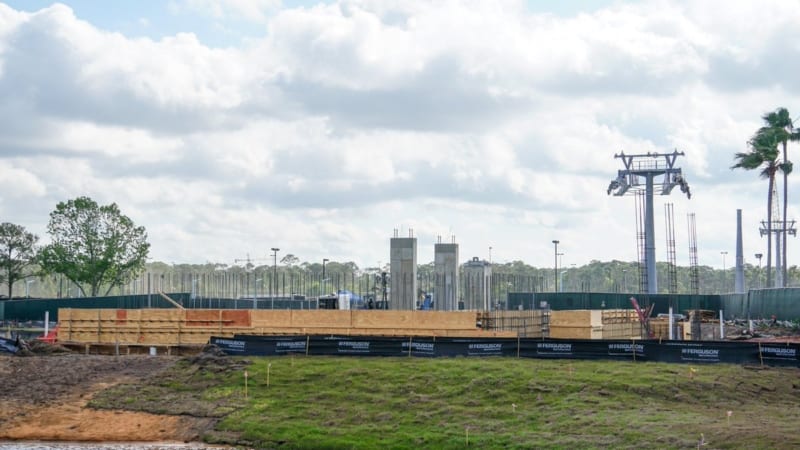 Here’s a great shot of almost all the Disney Skyliner system routes throughout Walt Disney World.  You can see Hollywood Studios to the top center.  The arrow from there leading to the left is where we came from at the Caribbean Beach Station.  Further left and it brings you can to Pop Century/Art of Animation.  Next we are going to go to the huge construction project in the middle of the image and the next stop on the Disney Skyliner: Disney’s Riviera Resort: 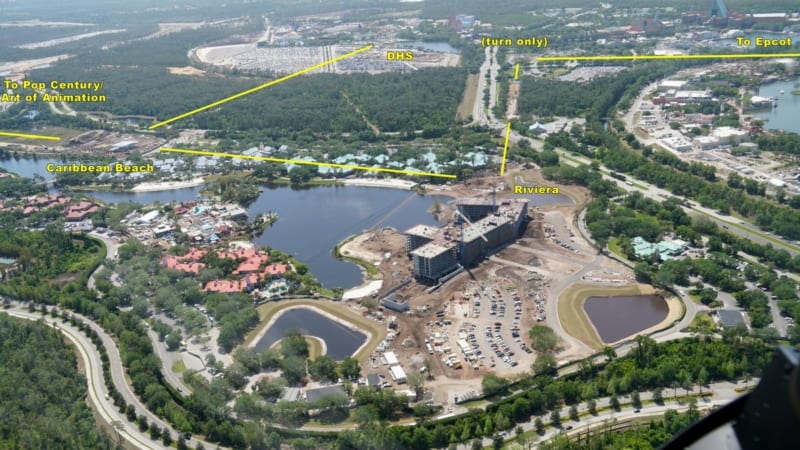 Coming from Caribbean Beach, the left arrow is the site of a future support tower, while the right arrow is the Riviera Resort Station: 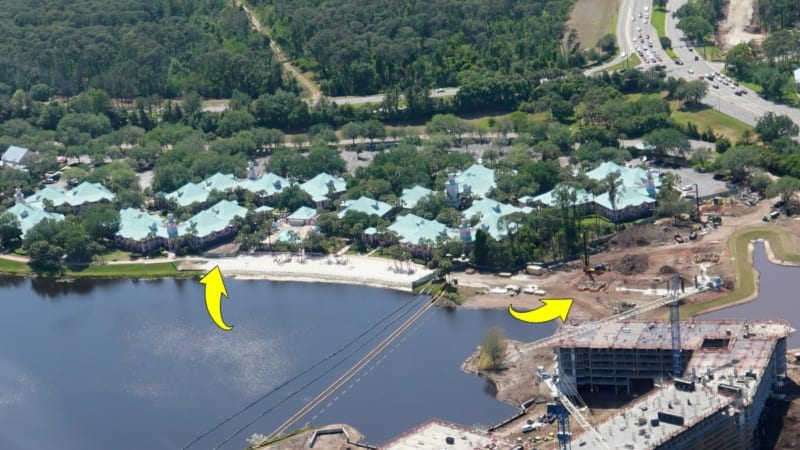 A better look at the Riviera Resort well underway: 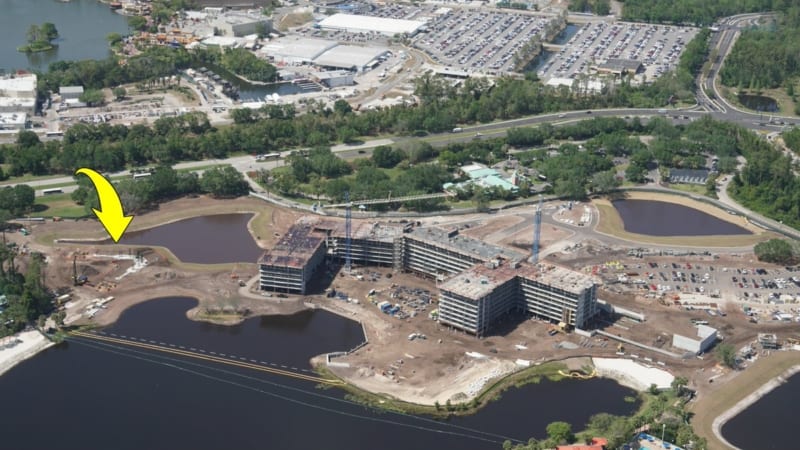 This shot shows the Skyliner route heading up to Epcot.  This part of the route runs alongside Buena Vista Dr, between the speedway and a RCID fire station: 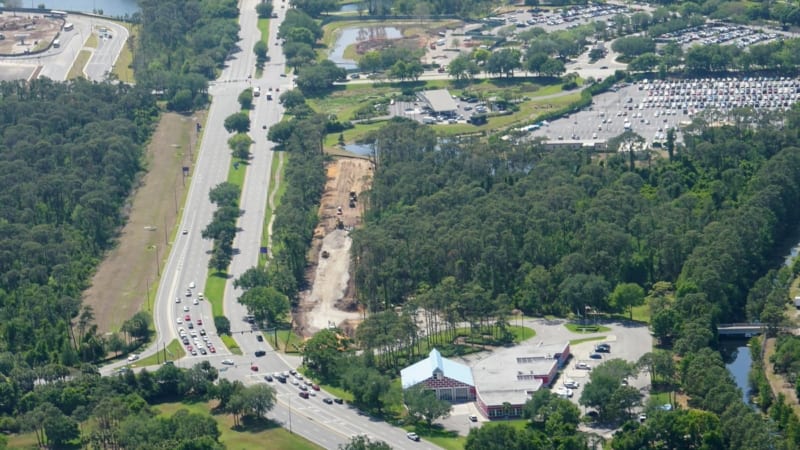 Here is a great shot of the last leg of the Disney Skyliner Route, which brings you right up to Epcot.  From the Riviera Resort it hits the Turn Station, then over the Boardwalk Resort parking lot until reaching Epcot: 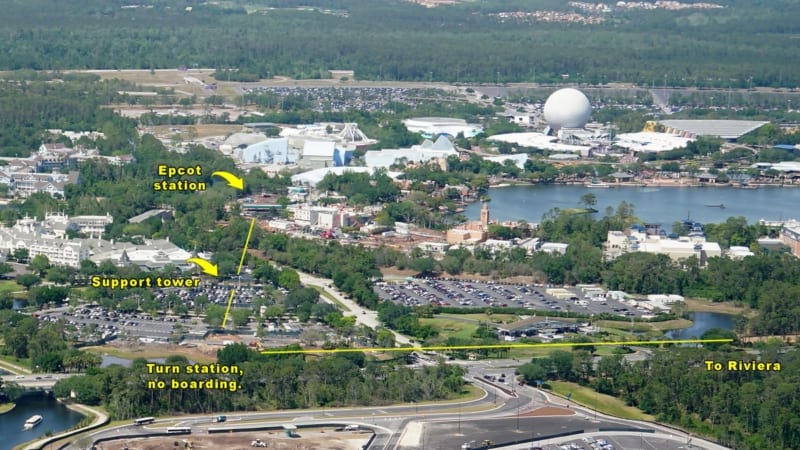 Here si the last stop at Epcot’s International Gateway.  Of course guests here will be soaring over the France pavilion and will get a great view of the then newly expanded area: 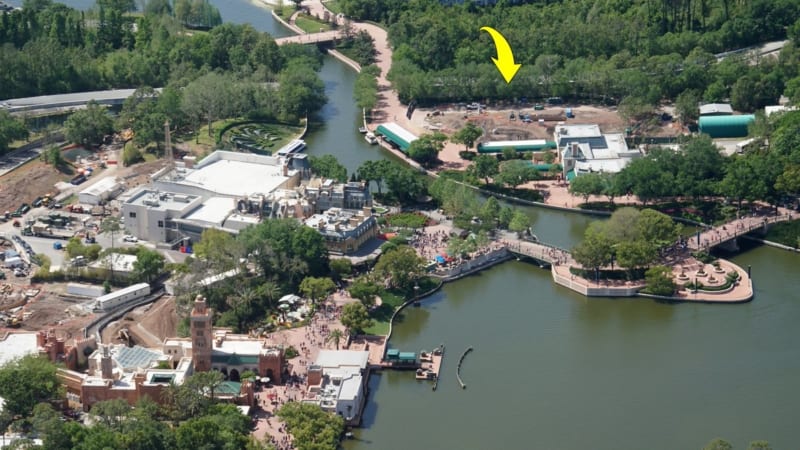 That wraps up our Disney Skyliner/Gondola construction update.  I’m sure we’ll be coming back soon though as new areas of the project are popping up every day.  Stay tuned for more Disney Skyliner updates soon!

I want to know what you think about the Disney Skyliner Construction Update for April 2018.