There was some big stuff released at the Star Wars Celebrations Conference today, first of which was a brand new Star Wars Rogue One Trailer.  Not only that but we know Vader is in the latest Star Wars film as the story takes place right before the events in A New Hope.  Well finally we got a chance to see and hear the baddest villain in film history….Well kind of.  He appears only in the version that was shown at the conference and not the version you can see online here:

The new Star Wars Rogue One trailer is full of behind the scenes footage and interviews from the movie.  And those worries from some a few months ago that it won’t be a very good film because of the need to re-shoot a bunch of content, forget them, it looks really amazing!!  It looks super realistic and intense, full of hard-hitting action.

It has a totally different feel than every other Star Wars movie, including Episode 7.  I love all the new characters, and the many versions of Stormtroopers that are in it!

There was also a brand new poster for Rogue One, with a battle on a beach(it was filmed in the Madives) 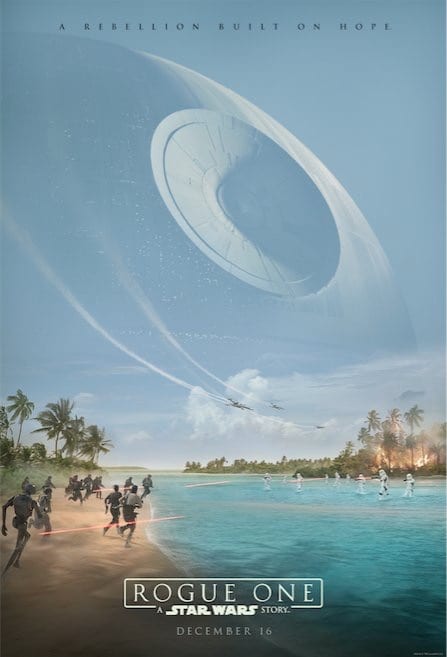 From the trailer, this looks like it will be the climactic battle of the film, with the rebel spies stealing the Death Star plans here.

Can’t wait for this, my inner 15-year-old is coming out big-time!!  Gonna be amazing!!