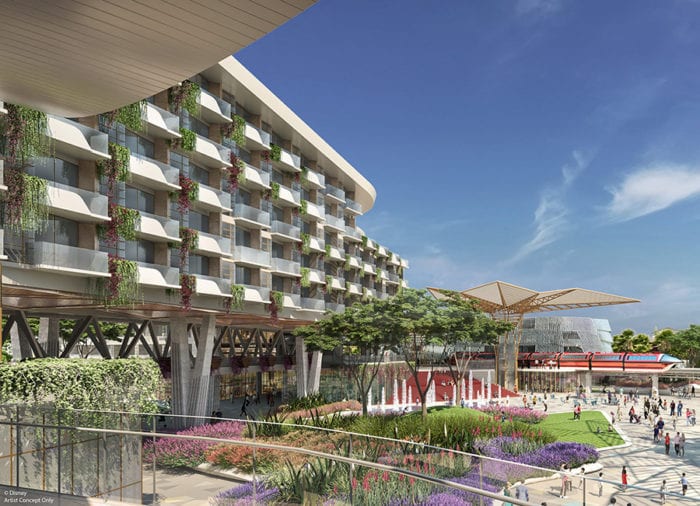 The photos look stunning, and it will have both a sophisticated design, and also make you feel very much a part of nature with extensive landscaping, gardens and even plants hanging form the windows of the rooms.  This natural beauty will be on display on every level of the hotel, creating a resort oasis-like environment.  Speaking of rooms, it’s going to have 700 of them and looks huge on the concept art.

The impact on Anaheim will be great as well, creating a dynamic dining, entertainment and hotel experience for resort visitors and local residents.  One of the highlights will be the upper-level restaurant and lounge that will give guests an incredible view of the Disneyland Park and fireworks.  Sounds like I’ve found my spot for dinner!

Another awesome addition will be a dedicated Monorail platform inside the hotel, which will bring guests right into Disneyland Park.  The new hotel also connects all four Hotels of the Disneyland Resort through lush gardens and beautifully landscaped walkways.  Plus we also learned tonight about a new 6,500-space Parking Structure next door to the existing Mickey and Friends parking structure, which will serve this new Luxury hotel and as a gateway into the Disneyland Resort.

This photo gives you a better idea of the Disneyland construction projects:

This is part of a larger Disneyland Resort expansion project which will need more hotel rooms on property.  In 2019 we will see Star Wars Galaxy’s Edge in Disneyland Park, Paradise Pier in being transformed next year into Pixar Pier, and we’re still waiting on more information about the new ‘Marvel-themed’ land and attractions that are coming to Disney’s California Adventure sometime after the first two.  So this fits in perfectly with those expansions.

So since the location is different what does this mean for existing restaurants and shops in the west end of Downtown Disney?  Let’s just say it doesn’t look good for them.  The ones in question are in particular: ESPN Zone, Rainforest Cafe, AMC Theatres, and  Earl of Sandwich.  This new luxury hotel just might mean the end of them, or in some cases could mean moving location.  For example, because the ground level of the hotel will include restaurants and shops with an expansive landscaped plaza, it’s possible that some of them could move in there.  In fact the Orange County Register says that Disney will be contacting some of them to potentially move into the new Hotel plaza.

Overall Anaheim of course is happy about the project because it’s going to bring a lot of benefits to the community and is expected to generate about $25 million in new taxes in the first five years of operation which will then go directly to Anaheim’s general fund.  Of course a job of this magnitude is going to create a lot of construction jobs (as if Disney didn’t already have a bunch of expansion work currently), and perhaps thousands of other permanent, long-term jobs too, not to mention even more guests.

Construction is scheduled to start in summer 2018, with a grand opening slated for 2021.  No name is currently known for this hotel, but keep checking back for updates and we’ll let you know any new information about the project.

I want to know what you think about the New Luxury Hotel Coming to Downtown Disney.  Do you like the design?  Are you happy with its location in Downtown Disney?  Let us know in the comments section below!

I'm trying to be diplomatic here but I can't find the words. My first reaction is that it looks like a convention hotel in Vegas Ugh!!! I am sure that it would be well done if it were an airport hotel however this is Disneyland Resort in California! Where is the charm, the magic and the vision??? We live in Southern California and have reservations at The Grand California Hotel this Summer, which is beautiful. Well, I guess we will be saving up for Orlando plane tickets the next time we are wanting a True Disney experience! I realize that I am being a bit harsh, however after Californians have waited all these years this is the best Disney can come up with. I have been thinking about a possible concept for about 60 seconds. I envision old Hollywood 1920"s Spanish style Villas with Sweeping staircases and Hollywood murals. A magnificent fountain in a center courtyard would be enchanting with bright pink bougainvillea trellises climbing archways that lead to a spectacular pool with possibly a white sand beach entrance. Whew, that was hard. Missed opportunity :(

Thanks for the reply Sunny! Yeah I love that description of a hotel that you wrote, that would be amazing! For now the project is on hold though so we'll have to see what happens when and if it eventually goes forward...