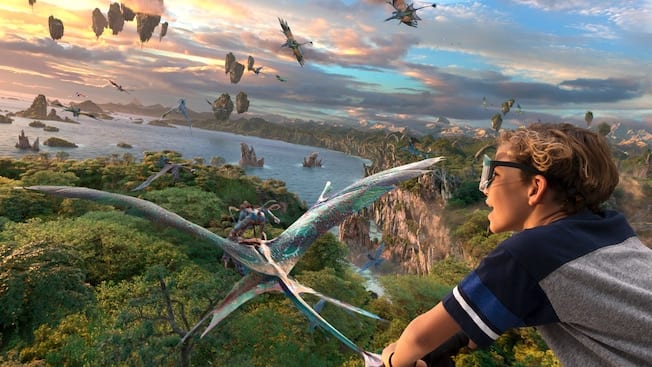 A really interesting story was brought to light about Disney Imagineers are working on a new patent that could adjust an attraction based on the reactions of individual guests.  Basically this technology, built into future or present Disney park attractions, would read various signs from each guest on the attraction and then adapt each user’s ride differently based on those reactions.  That means if a guest starts getting too scared, the ride would tone itself down for that guest.  Or if a guest is noticed to be bored, it would ramp up the intensity.

The example they gave was about Flight of Passage in Pandora: The World of Avatar.  The technology in this patent would recognize for instance that someone was starting to get sick on the attraction, and instead of continuing with the intense version of the ride, might have the banshee pull down low to the ground and take them on the easy route.

This technology involved in the patent could use a combination of a guest’s heart rate, facial expressions, perspiration, eye movements, vocal stress, skin temperature, and even their age to gauge their experience.  Based on those reactions the attraction could set off, or not set off a series of special effects throughout the ride enhancing or limiting the experience.

Here are the patent plans listed: 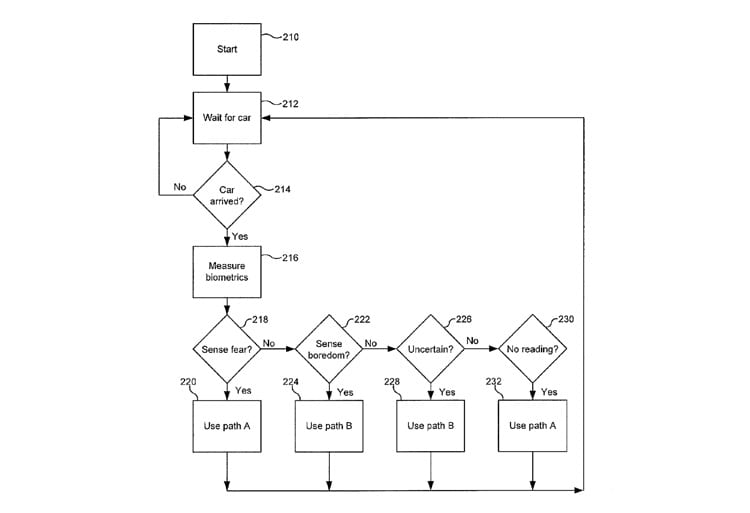 Here’s another print from the patent: 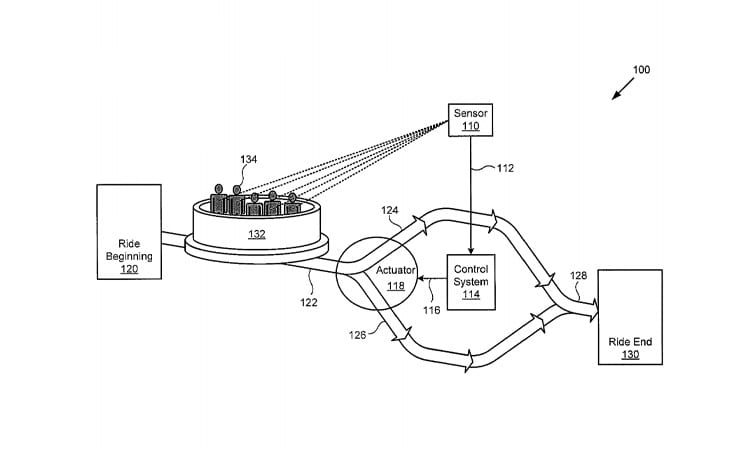 Another example specifically mentioned by the patent is the Haunted Mansion attraction.  With this example the ride technology could see how scared guests are and could either tone it down some or make it even scarier.  It’s very similar, and probably works in conjunction with the other patent Disney filed for last year about guest emotions changing the attraction experience.

This technology could really be a game-shanger, but I envision many problems in making it work properly.  I mean for one many people go on scary rides, to be scared.  Just because someone is screaming and making scared faces, doesn’t mean they don’t want to experience that.  I know people who have been on the same rides 100 times, and still scream like they don’t know what is already coming.  In that case the technology could tone it down when the guest really doesn’t want it to happen.

At the same time, if properly applied, it would allow guests who maybe are a bit timid, to to experience something at their own acceptable fear level, and if it didn’t also limit the other guests around him/her somehow, then it could be a really good idea.

That said, Disney files many patents that never even see the light of day in the Disney parks, like the Track-based Swing Ride with Long Arm Pendulum which could lead to a new Spider-Man attraction.  It could also sell this patent to another company and it could be used for something different.  But when Disney does go through the patent process with one of its creations, it usually means that Imagineers have determined that specific technology has enough future value to the company.

I want to know what you think about this new Disney Patent for guest reactions on attractions.  Do you like the idea of modifying the attractions for each guest?  What potential challenges or benefits do you see it could bring to the Disney Parks?  Let us know in the comments section below! 🙂

I’m not sure how is this going to work. I love Disney, I have been a pass holder for many many years since I was a teenager till now that I’m 56 years old. My daughter’s birthdays where celebrating at Disney every year and now she is 22 years old and we keep going every year sometimes twice. We love everything about Disney but I don’t know how this is going to be enjoyable if we have to ride along in most of the rides and not together as a family. Take me as an example, one of my favorite rides is Rock and Roller Coaster and I know exactly what’s coming in every movement in the ride but i still scream and go wild every time I ride. It’s not because I’m scare or want it to stop it’s because I’m extremely excited! I think you should have a attendant explaining every single thing that will happen during the ride on monitors while we wait on line to get in the actual ride this way everyone is being worn before they ride. Make an exit door before you get in the actual ride in case someone change their minds and wants to leave. This will avoid any conflicts and complaints.

Thanks for the comment. Yeah I agree with you Hilda. I have know idea how the system could differentiate people's emotions and if they really want the intensity to stop or not, and of course if you're in the same car with someone who feels differently than you it could cause some big problems. Maybe this tech couldn't be used on every ride, but something like Flight of Passage maybe so because it's more of a singular attraction...