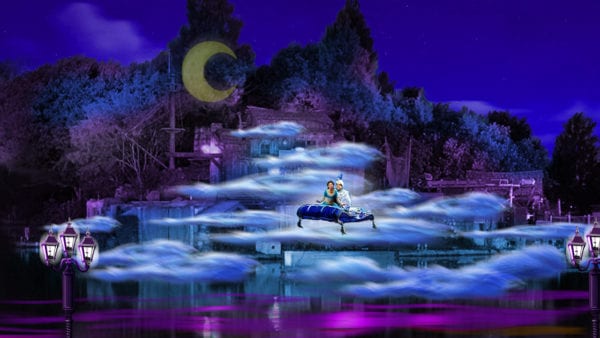 We’ve been eagerly waiting for one of our favorite Disney nighttime spectaculars to come back and we’re happy to tell you that Fantasmic Returns to Disneyland Park this Summer.  It will be great to have it back on the Rivers of America where it belongs!  While you can expect a lot of familiarity with the classic Disney show, including it’s trademark theme song, expect to see Fantasmic taken to even higher levels than before by introducing new scenes and technology to it.

One thing Fantasmic will feature are brand new mist screens that will use state-of-the-art projection technology that will make the visuals even more stunning than ever before!  Expect for them to use something like what you see in the Rivers of Light show at Disney’s Animal Kingdom or the new Happily Ever After in the Magic Kingdom.  These are awesome and really make the show come alive!

Fantasmic will also feature new scenes from Disney classics such as Aladdin with Aladdin and Jasmine using a flying carpet to fly over a bed of fog during the “A Whole New World” song.  Other new scenes incorporated into Fantasmic include: The Lion King, Pirates of the Caribbean and Tangled.  Plus Mickey Mouse is rumored to have an even bigger role in the new show than in the past!  Only negative imo is that Peter Pan is being removed from the show which I’m not too thrilled about…

It’s going to be a very busy Summer in Disneyland Resort also with the new Guardians of the Galaxy attraction opening up May 27th starting the Summer of Heroes event.  As well as the Disneyland Railroad finally making its return too!  Not to mention the D23 Expo that’s hitting Disneyland July 14-16th.  See you around Disneyland this Summer!

Guardians of the Galaxy in California Adventure this Summer
← Previous
Happily Ever After Fireworks Review - Best Walt Disney World Show Yet
Next →
Click here to cancel reply.