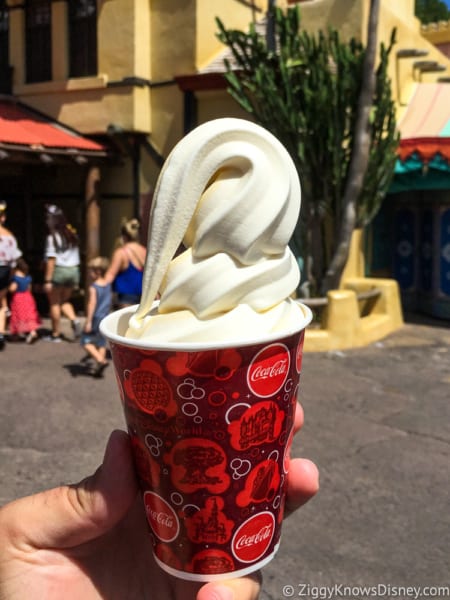 One of my favorite Walt Disney World snacks, the Dole Whip is now available at Disney’s Pop Century Resort!  That means that guest will have another place to enjoy this classic Disney snack.  You can get a Dole Whip in both the Pineapple and Vanilla Swirl varieties for $4.49 or a Pineapple Float for $5.49.

The Dole Whip is traditionally served at Aloha Isle in Adventureland in Disney’s Magic Kingdom, but over the last few years it has also shown up in new locations through the Walt Disney World resort like Disney’s Polynesian Village Resort, and even at the Refreshment Port in Epcot which has introduced the Dole Whip w/Rum during the Food and Wine Festival.

I’m fine with the Dole Whip being served at the Polynesian Resort because at least it keeps with the theme, but I don’t like it being available in other locations outside of Adventureland.  It cheapens the magic of getting one in it’s REAL location, and I don’t want to see it start popping up around Walt Disney World in other places.  What do you think?

I want to know what you think about the Dole Whip at Disney’s Pop Century Resort.  Do you think it belongs there?  Should it be brought to other locations?  Let us know in the comments section below!

I agree. It should be kept special instead of making it available in too many places.