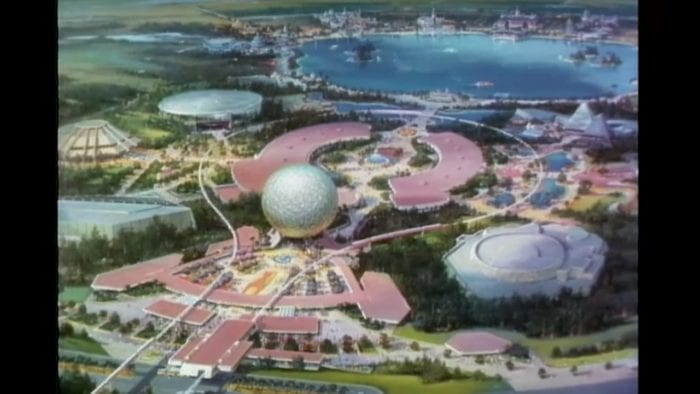 For lovers of the original Epcot, you know World of Motion, Horizons and Communicore, Disney did something today that will have you jumping for joy, and taking you on a trip down memory lane!  They opened up their vault and released a rare Epcot promo video to share with the public just before Epcot’s 35th Anniversary celebration called “The Dream Called EPCOT.’

The film was originally run at EPCOT Preview Center in the Magic Kingdom to give guests a preview of the new park.  Now you can see what it was like inside WED Enterprises during the “Imagineering” of EPCOT Center in the 1970s.  The film was setup to show guests what kind of experiences they could look forward to when Epcot was open and gave sneak peaks at attraction models, renderings and animations for classic Epcot attractions like: The Living Seas, Horizons, World of Motion, CommuniCore and Spaceship Earth.  It also gave a glimpse of early construction footage of said attractions.  Not only that but you can listen to some of the great classic songs that were composed specifically for Epcot like: “It’s Fun to Be Free,” “Universe of Energy” and “Listen to the Land.”

This is truly special stuff!  Well, looks like I know what I’ll be watching on repeat all night long… 🙂

Of course we know that on Sunday Oct 1st Epcot is celebrating its 35th anniversary, and the park is going to be full of special events, shows, merchandise and a ceremony, so stay tuned with weekend as more is sure to come!

I want to know what you think about the Epcot Promo Film: “The Dream called Epcot.”  What was your favorite part when you watched it?  Let us know in the comments section below!