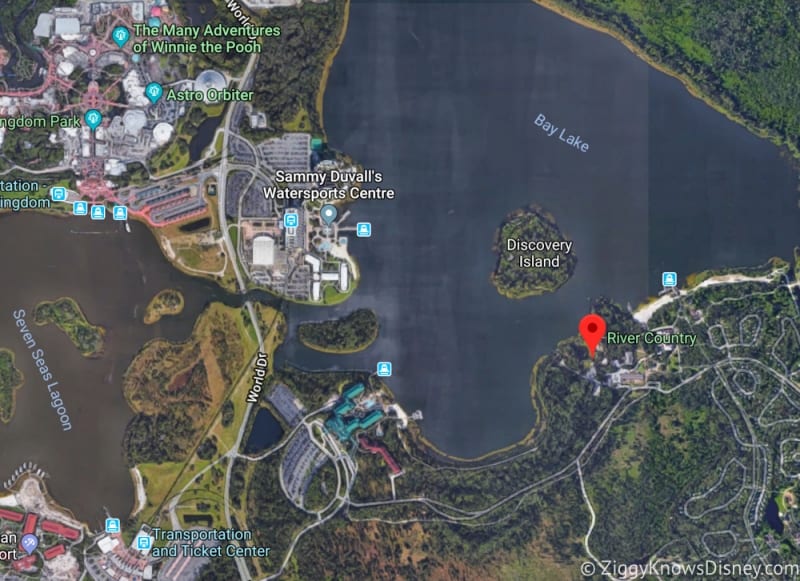 We’ve been eagerly waiting for more news on the River Country area hotel project, and now we’re excited to share with you on Project 89, as it’s internally known.  Disney has chosen the contractors that will be building the River Country hotel: The international design firm WATG has been chosen to design it and Balfour Beatty will head up the construction.  This info comes from GrowthSpotter who has been in contact with al the parties involved.

Rumors about a hotel coming to the old River Country area have been going on for years, but just a couple of months ago in March we started to see real movement on the project.  Disney filed permits to conduct a “geotechnical investigation to assess the suitability of subsurface soils” on the area indicated on the map above, right over the site of River Country.

Then earlier this month we saw more permits filed using the Project 89 name, these ones showing a water basin going in just north of Vista Way, near the Magic Kingdom Toll Plaza.  This will be used in conjunction with the River Country hotel project.

The deign company WATG is a company that has a history with the Walt Disney company having worked on the Grand Floridian Resort, and also hotels in the Disney international parks like: Tokyo, Hong Kong and Paris.  Balfour Beatty is no stranger to Disney either as they worked on the construction of Pandora: The World of Avatar, and have been hired to build the Ratatouille attraction coming to Epcot and the new Coronado Springs Resort tower.

We don’t know too many details around the old River Country area hotel project, but we now know that it will have 1,340 bays (the equivalent to a standard room size).  Out of those rooms 300 of them are expected to be put aside for DVC rooms.  That seemed obviously as Disney continues to build more rooms for the huge DVC brand.  It’s also estimated that the resort will cost roughly $350 Million.

The only thing we don’t know yet is the theming it will have.  But since it’s location near both Fort Wilderness and the Wilderness Lodge, all bets are on a similar theming.  Construction on the project will most likely begin in the next few months as Disney is first concentrating on the new Star Wars Hotel, which is going outside of Star Wars Galaxy’s Edge in Disney’s Hollywood Studios.  Once that is a bit further along, construction will begin on the River Country area hotel as well.

We’ll continue to keep you updated as soon as we have more info!