Beauty and the Beast Sing Along 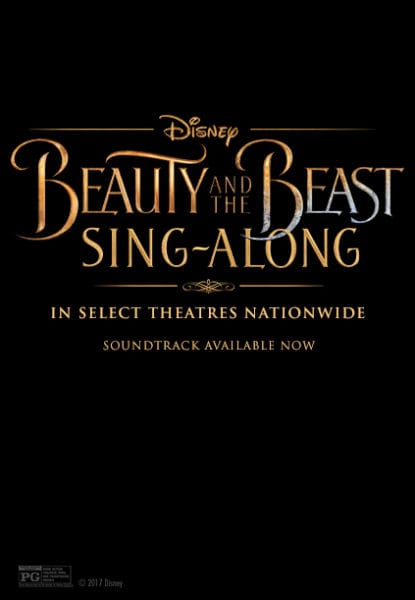 If you haven’t seen Disney’s Beauty and the Beast yet or if you loved it and wanted to see it again you’ll now have a very special opportunity to do so.  In theaters starting this Friday April 7th Disney is releasing a Beauty and the Beast Sing Along version.  This will include on-screen lyrics to all your favorite songs from the film such as: “Beauty and the Beast,” “Gaston” and “Be Our Guest.”

Already the live-action version of Beauty and the Beast has been a smashing success, already having grossed more than $875 million world-wide and posed to cross the $1 Billion mark before leaving theaters.  This means it’s already the Highest Grossing Musical of all time.

The classic songs were written by eight-time Oscar-winning composer Alan Menken (who is being honored by the Songwriters Hall of Fame soon), and 2-time Oscar-winning lyricist Howard Ashman, as well some new songs from Menken and 3-time Oscar-winner Time Rice.  The Beauty and the Beast Official Soundtrack has also garnered high praise from the critics and has risen the Billboard Charts to No 3, thanks to a star-studded lineup of singers such as: John Legend, Ariana Grande, Celine Dion and Josh Groban.

I love the idea of the Sing-along version of the film, many people familiar with the original maybe don’t need the lyrics, but the new generation of young fans probably don’t know the words yet and it’s a great way to get them to learn them.  Get to the theater and see this version while you can starting April 7th.

I want to know what you think about the new Beauty and the Beast Sing Along version coming to theaters.  Do you like the idea?  Will you go see it?   Let us know in the comments section below!