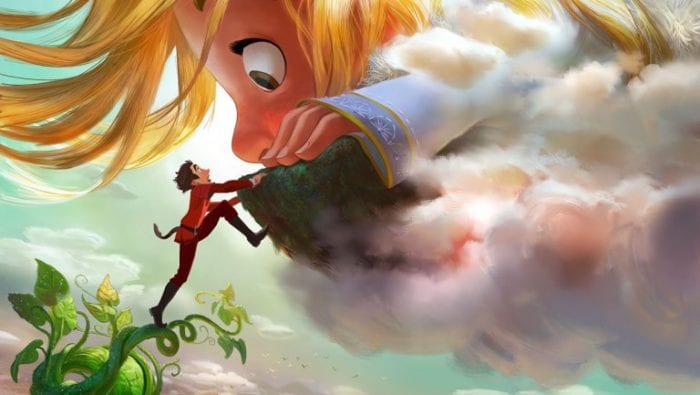 After years of production delays and now hitting a ‘creative wall, Walt Disney Studios has cancelled the upcoming animated film Gigantic.  Gigantic was a story about an updated look at the Jack and the Beanstalk fairy tale, where Jack would befriend a female giant.  The film was to have been directed by Meg LeFauve (Inside Out) and Nathan Greno (Tangled), with music by Frozen‘s Robert Lopez and Kristen Anderson-Lopez.

This comes as a surprise to no one who’s been following the project for some time now as Gigantic has been plagued with production delay after delay.  Originally announced by John Lasseter at the D23 Expo in 2015, Gigantic was supposed to have a March 2018 release date.  It then was delayed to November 2018, then again to November 2020, and now ultimately shelved due to creative difficulties.

Unfortunately, even though Disney really wanted to make this happen, there were too many creative difficulties and were not able to make it work.  “It’s impossible to know when we begin a project how the creative process will unfold, and sometimes, no matter how much we love an idea or how much heart goes into it, we find that it just isn’t working,” said Walt Disney and Pixar Animation Studios president Ed Catmull. “With Gigantic, we’ve come to that point, and although it’s a difficult decision, we are ending active development for now.”

We did however learn there is a new untitled project Disney Studios is working on that will take Gigantic’s November 2020 release date spot: “We are focusing our energies on another project that has been in the works, which we’ll be sharing more about soon, now set for Thanksgiving 2020.”

No further details are known about the upcoming project at this time.  Ultimately I think it’s a good decision canning Gigantic.  If the movie isn’t going to be a success, then there is no point going forward, you’ll then just have a “Gigantic” flop on your hands.
This now brings into question also whether or not a new Epcot World Showcase pavilion will be built in time for the 50th Anniversary of Walt Disney World, as Spain was one of the two popular choices seeing as it’s where Gigantic was themed around.  I guess this new project could also be based in Spain which then would leave the door open for Epcot, or it could be a country like Brazil who gets a World Showcase pavilion first.

I want to know what you think about Walt Disney Studios Cancelling Animated Film ‘Gigantic’.  Do you think it’s a good decision?  What do you think this new Untitled Project could be about?  Is a World Showcase Pavilion still coming to Epcot?  Let us know in the comments section below!