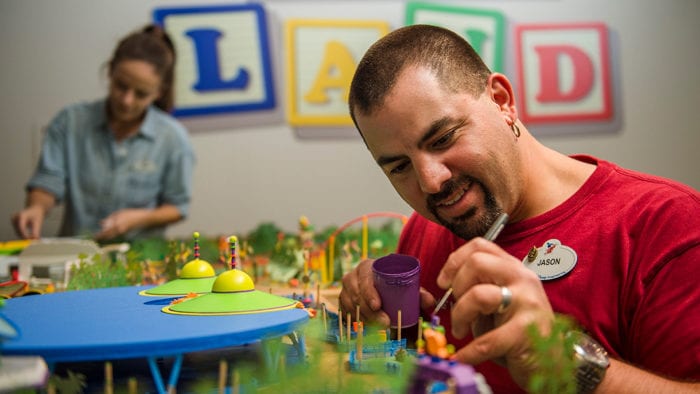 Just a couple weeks ago, we found out that the One Man’s Dream attraction in Disney’s Hollywood Studios is closing down and the space would then be transformed into the Walt Disney Presents Preview Center, a similar attraction which gives guests a view into the past, present and future of Disney.  Disney just let us know that we can expect the Walt Disney Presents opening September 8th in Disney’s Hollywood Studios.

Of course people will be able to check out historic sketches, photos and other goodies from Disney Park’s past, but even cooler than that are going to be the concept art and models for future attractions!  We love this idea as it let people have a sneak peak into some of the coming attractions to the park, including Toy Story Land, Star Wars Galaxy’s Edge, and Mickey and Minnie’s Runaway Railway.  In fact a whole new Toy Story Land model is currently being finished up by Disney Imagineering for the opening!

Check out the Star Wars Galaxy’s Edge Model from the D23 Expo this year:

It’s great to hear September 8th is the opening as I knew from when we got the announcement it wouldn’t be long for Walt Disney Presents if they were going to let us look at Toy Story Land, that opens in Summer 2018.  I also didn’t expect it quite this soon, but I’ll be super excited to take a look at the new models.  I hope this idea stays around for a while as it should build anticipation for everything coming to the parks in the next few yeas!

I want to know what you think about the Walt Disney Presents opening next week?  Do you like the change from One Man’s Dream to a preview for new attractions?  What are looking forward to seeing there?  Let us know in the comments section below!

Have to say I am disappointed to see the One Man Dream close. It is my favorite little area for getting out of the crowds in Hollywood Studios. I find it a very interesting museum. Would prefer to celebrate all of Walt(& Roy)not just the theme parks.

yeah I hear you. I really like the new one though, I feel it still celebrates Walt and Roy, while at the same time getting people excited for the future of the parks which is something I think works really well. If there was more space then maybe they could do them separate but for now it's like this...