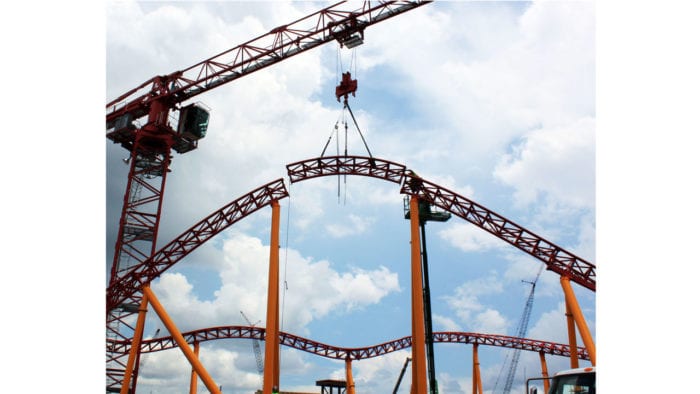 UPDATE 8/1/17:  Today Disney shared a milestone with us directly from the construction site of Toy Story Land in Disney’s Hollywood Studios.  Photos and a video were taken as the final piece of the Slinky Dog Dash Coaster Track was put in.  This family coaster will debut as one of the land’s two new attractions (alongside Alien Swirling Saucers) when Toy Story Land opens in summer 2018.

It will shrink guests to the size of a toy and put you right in the middle of Andy’s backyard.  It’s supposed to be just like a coaster Andy has built in his backyard using his Mega Coaster Play Kit, and also including some of his other favorite toys along the way.

To hear what some of the Disney Imagineers have to say about the Slinky Dog Dash Coaster track and the rest of Toy Story Land, watch the video below:

Tremendous progress has been made on the Toy Story Land construction, and in particular just this week we saw the the Slinky Dog Dash Coaster track finished!  And wow, what speed!  Thanks to Twitter user @bioreconstruct we’ve been following the progress intently and wanted to share. 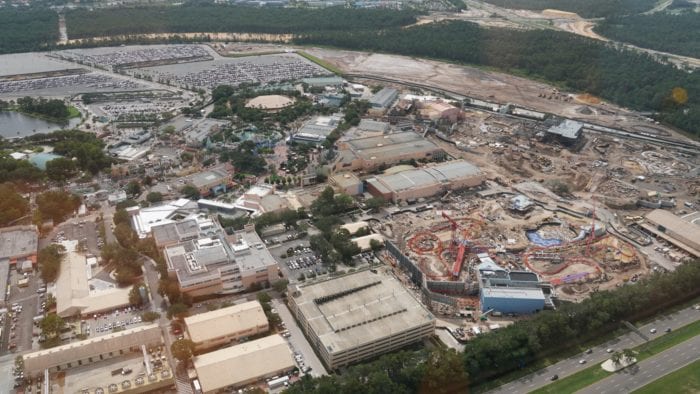 Now let’s take a better look at the construction.  At the top you see an overview shot of Hollywood Studios and Toy Story Land.  You can see Toy Story Land on the bottom right and Star Wars Galaxy’s Edge on the top right.

Next we see an up-close shot of the Slinky Dog Dash Coaster and we can see that every part of the track is in place: 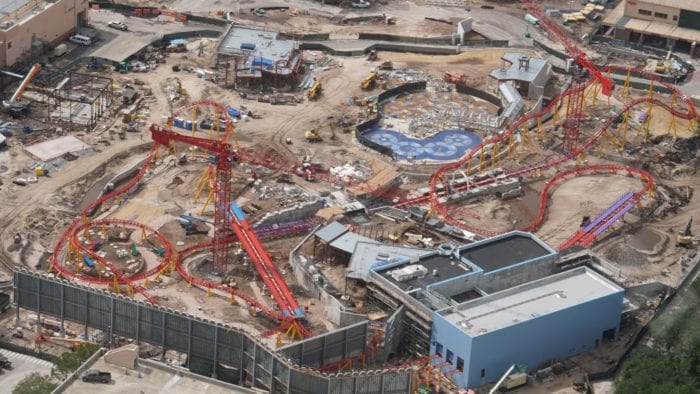 If you look back from pics less than 2 months ago and compare it with the one above it’s completely different, what a transformation: 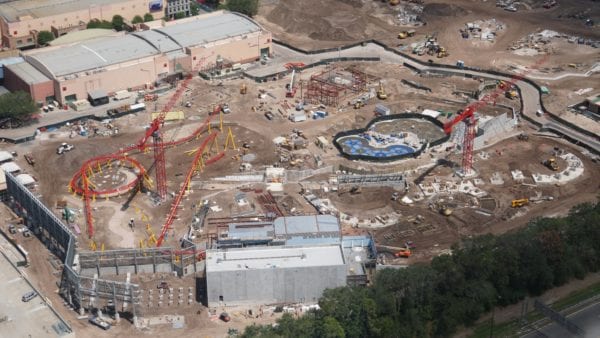 We can see the Alien Spinning Saucers in the center of the picture, with the bottom of the ride mechanism being the 4 blue circles.  Also if you look close to the Slinky Dog Dash track, you can see what looks to be the starting point with the half-moon arches being constructed over it. 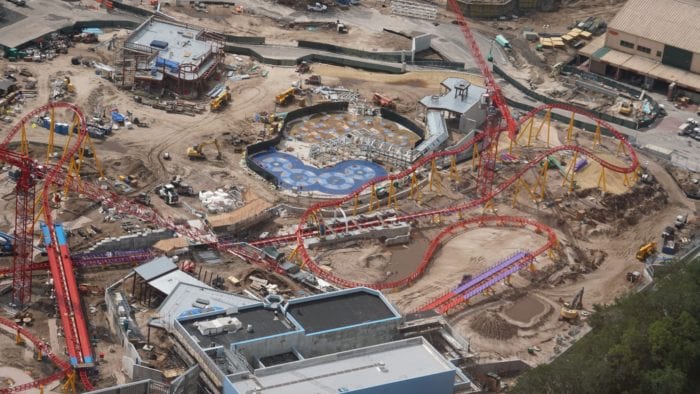 Now compare the construction shots with the concept art we got at D23: 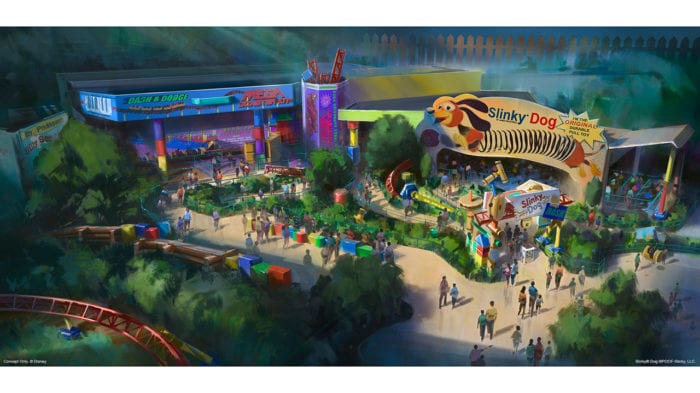 Now the concept art doesn’t show the whole coaster, but you can see what looks like the show building and it even seems like a bent part of the track wraps around the front left of the entrance and goes under the ground.  Not sure how that will work if that part will get covered over or if it’s just a mistake in the concept art.  It does seem though like a part of the track will be inside a show building, which I would love so that it can get a little extra theming you don’t see when the track is outside. 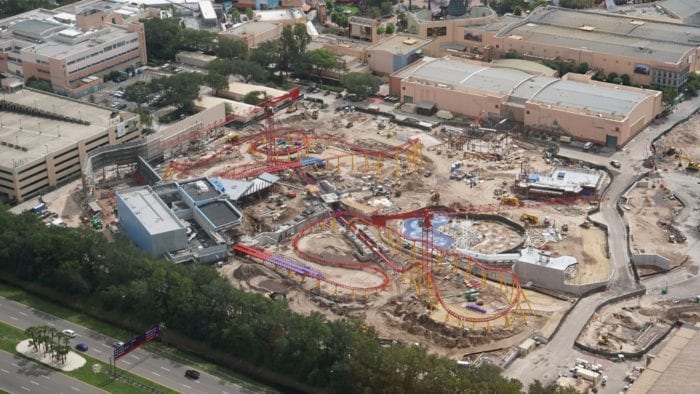 Here’s a side view of the coaster. It looks pretty long imo, and when comparing it to one of the more recent coasters to hit WDW Snow White and the Seven Dwarfs, it looks longer than that and more exciting too! 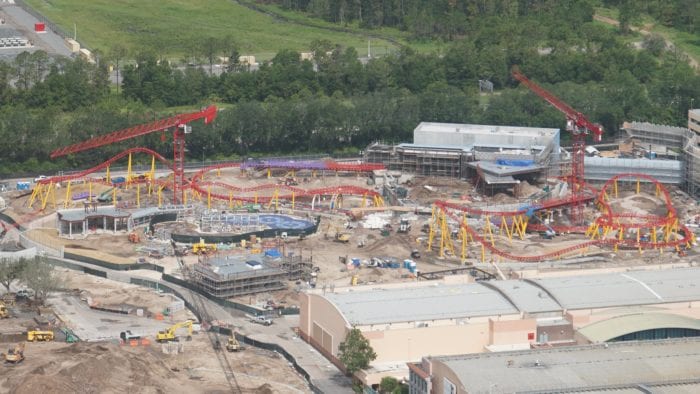 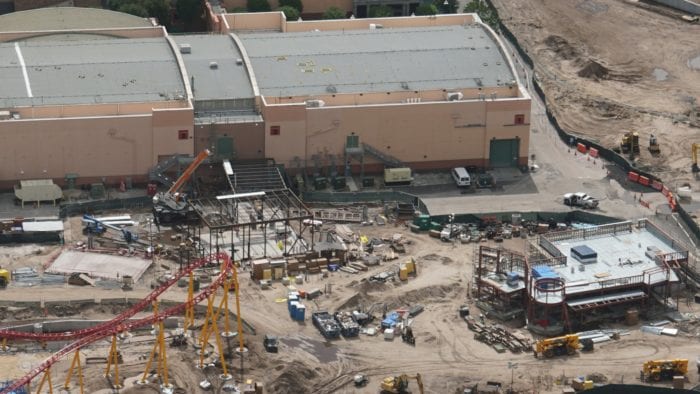 After Toy Story Land we also got a look at the construction progress for Star Wars Galaxy’s Edge.  Things are moving fast here too, you can see another crane being installed: 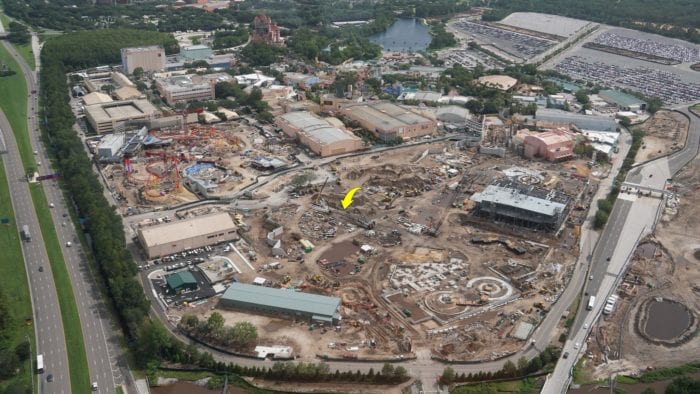 Next is the show building for the First Order Battle attraction which is on the right of the bigger photo above: 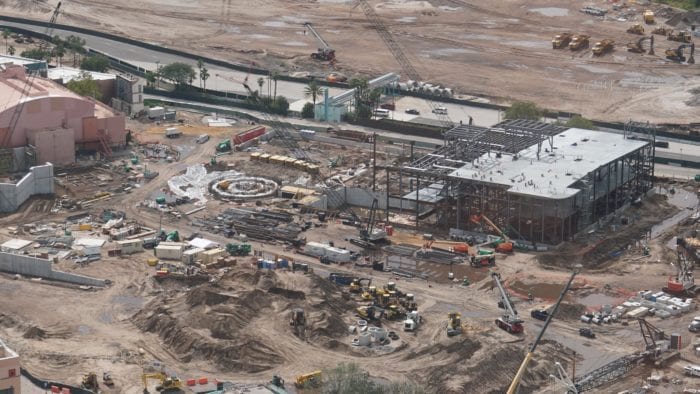 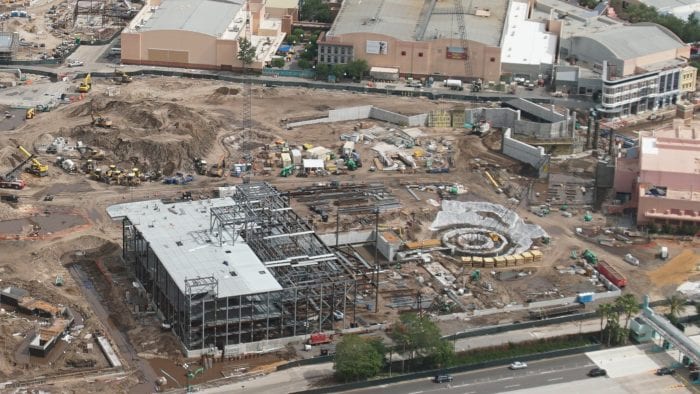 And lastly we can see the foundations being put in for the Millennium Falcon ride.  They are interesting, and I wonder what the reason for the circular shape is…guess we’ll find out: 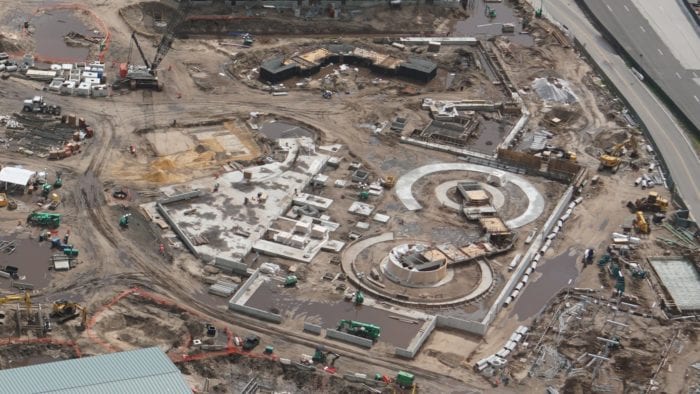 As you can see lots of progress being made.  Not as much as we saw in the Star Wars Galaxy’s Edge in Disneyland last week, but things are looking great!  Look for Toy Story Land in Summer 2018 and Galaxy’s Edge sometime in 2019.

I want to know what you think about the Slinky Dog Dash Coaster Track finished.  Which land are you looking forward to the most?  Which attraction?  Let us know in the comments section below!