As was already announced, we know that the next Star Tours – The Adventures Continue scene is going to be the planet of Crait.  If you’ve seen the latest Last Jedi trailer you’ll have noticed that Crait obviously plays a big part in the film, with a big showdown between The Resistance and the First Order, reminiscent of the Hot battle in Empire Strikes Back.  Obviously Disney wants to include the latest Star Wars film into the parks as much as possible, so this is a great opportunity and gives an older ride another reason to ride. 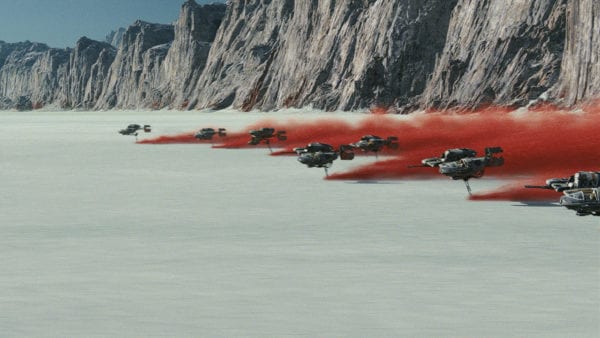 I can’t wait to get on Star Tours and see for myself how the new scene is, what about you?

I want to know what you think about The Last Jedi Scene coming to Star Tours.  Are you excited about the new scene?  Is there another place besides Crait you would rather see?  Let us know in the comments section below!

'Solo: A Star Wars Story' is the Name for New Star Wars Han Solo Film
← Previous
All runDisney Races for Disneyland Cancelled for 2018
Next →
Click here to cancel reply.