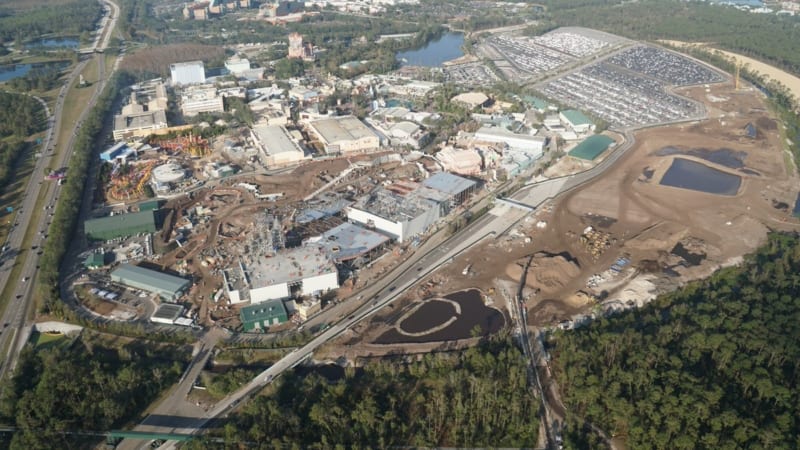 This is a Star Wars Galaxy’s Edge Construction Update for December 2017.  There has been a lot of updates over the last month on our most anticipated Disney construction project.  We found out that the official name of the planet where Galaxy’s Edge is located is Batuu, and we even got some pretty detailed blueprints for the layout of Batuu.

Most exciting of all is we also got our first look the Millennium Falcon attraction from Disney, and even though we only got to see the ride queue before going into the cockpit, we couldn’t be more excited.

Thanks as usual to @bioreconstruct over on Twitter, we have some awesome photos of the construction progress being made in Galaxy’s Edge in Disney’s Hollywood Studios.  Let’s see what changes we can find:

Here’s a look straight down on Galaxy’s Edge: 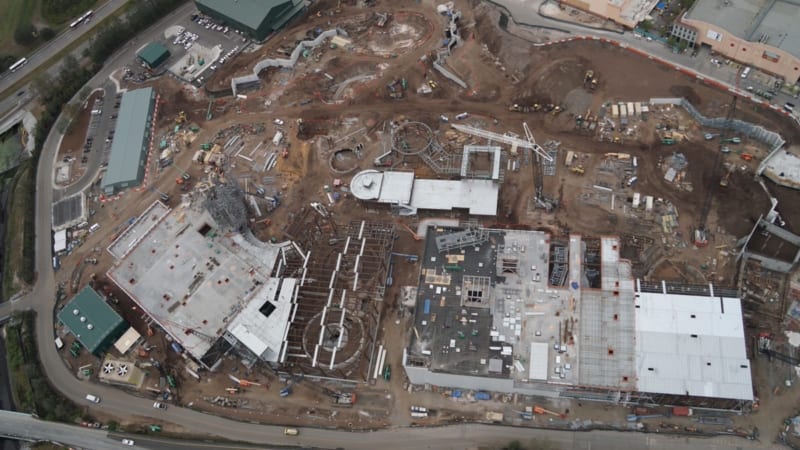 Since the construction update in November we can see a lot of progress being made over at the main entrance to Galaxy’s Edge which is completed from the Grand Avenue side.  Here you see an overhead shot of Grand Avenue with the bottom arrow indicating the Star Tours attraction and the top arrow the inside of the entrance tunnel going into Galaxy’s Edge.  Still a little strange that Star Tours will remain outside Galaxy’s Edge, guess it’s a preview for guests!  Have to think though, in the long term they will eventually move something else there. 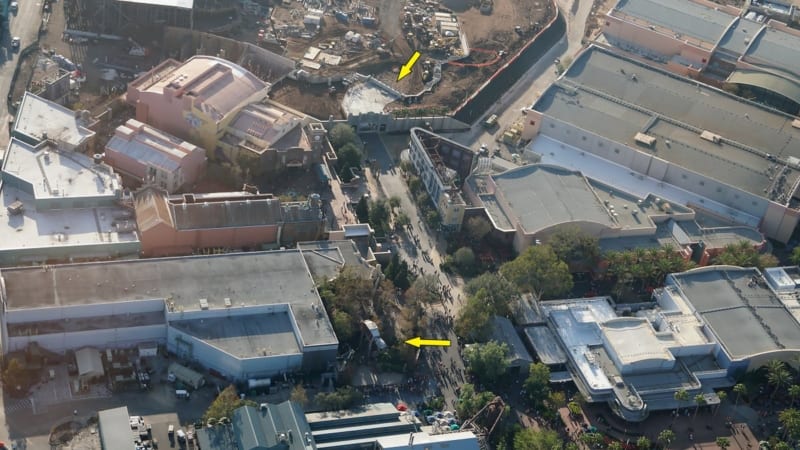 The top arrow shows the entrance on the Galaxy’s Edge side, and the bottom one shows the Miss Piggy Fountain which finally has water again! 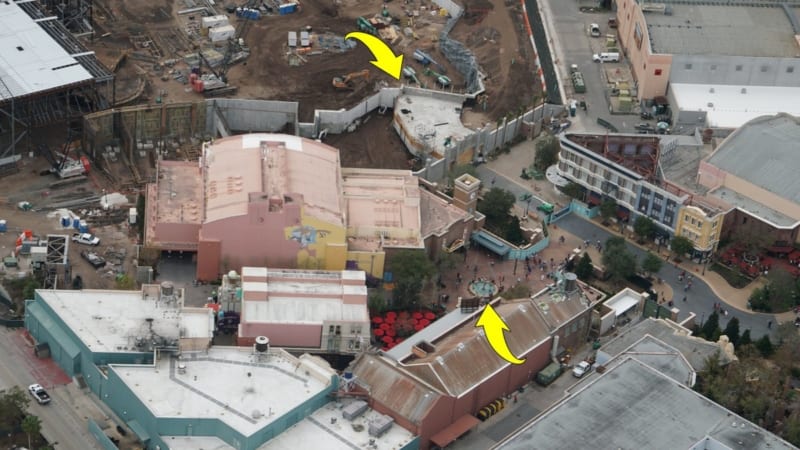 The entrance from the Grand Avenue side has been under construction for some time and is finally complete, so let’s take a look. 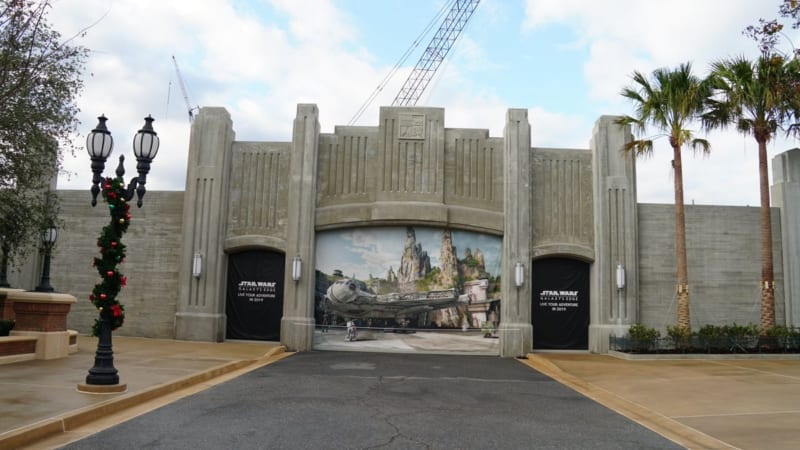 You can see this side of the tunnel is finished and they put a mural of the outside of the Millennium Falcon attraction at the gate, which serves as a great photo op if you are in the Studios: 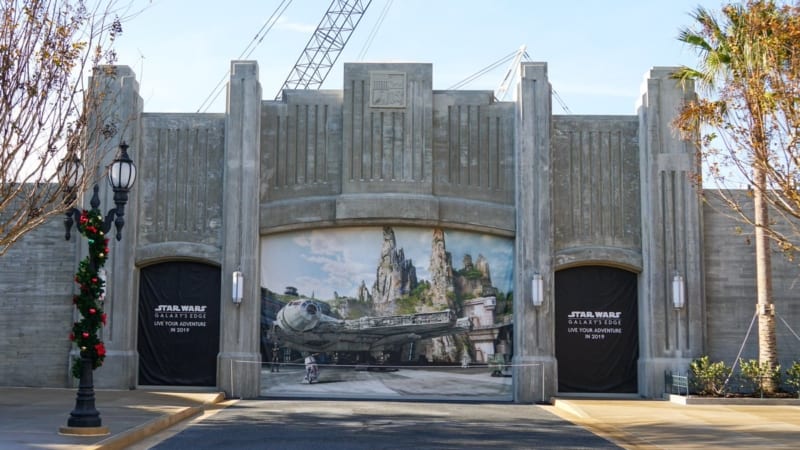 As we guessed some months back, the Galaxy’s Edge entrance is indeed a replica of the Figueroa Street tunnel design in Downtown LA., even right down to the emblem above the tunnel: 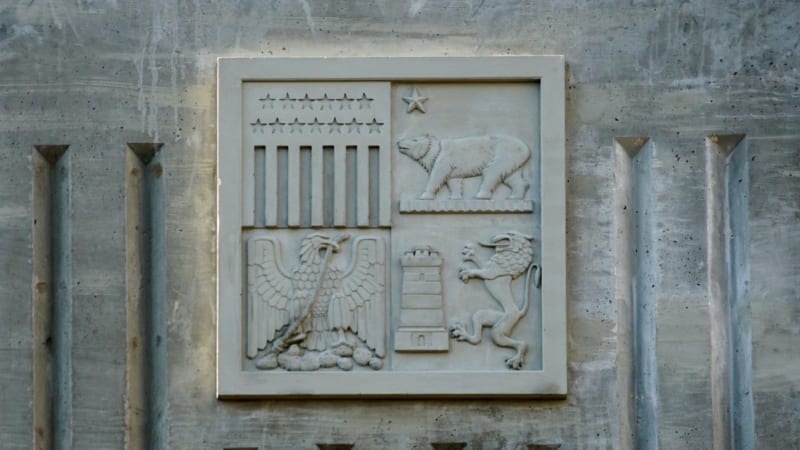 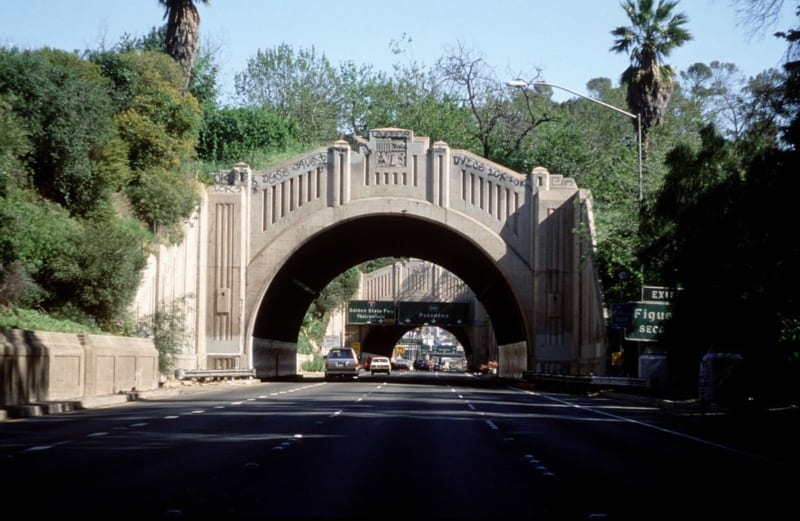 Here you can see some more details of the work being done to the entrance, but on the Galaxy’s Edge side:

A: shows some Rock Formations inside Star Wars Galaxy’s Edge

B: here they put a Safety fence, away from the guest side

C: This is the no-man’s-land area that runs along the length of the tunnel between Grand Avenue and Galaxy’s edge which will be filled in

D: this building has scaffolding setup for a concrete ceiling/roof to be put on top 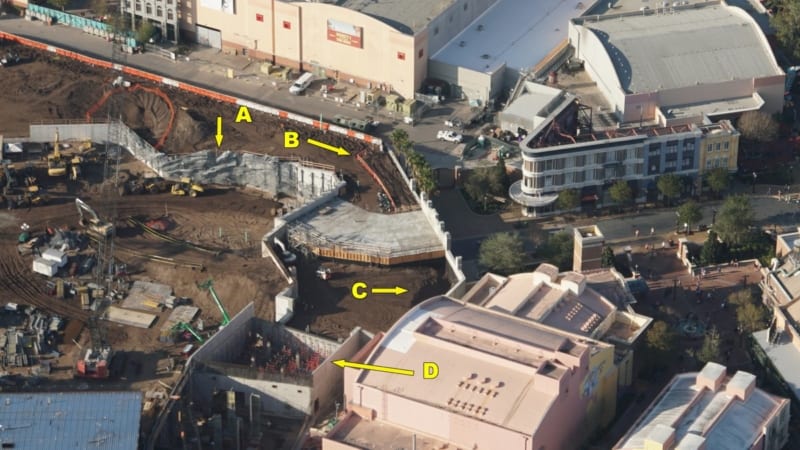 Construction walls are down at the new backstage gate. 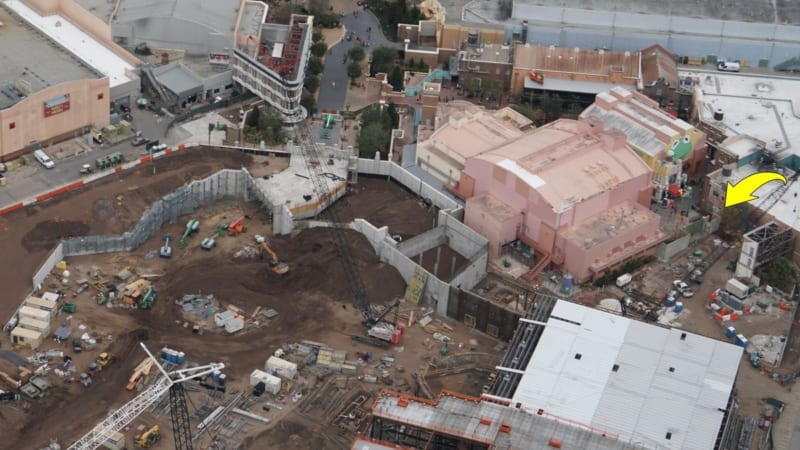 Here you can see a shot of the inside of the tunnel: 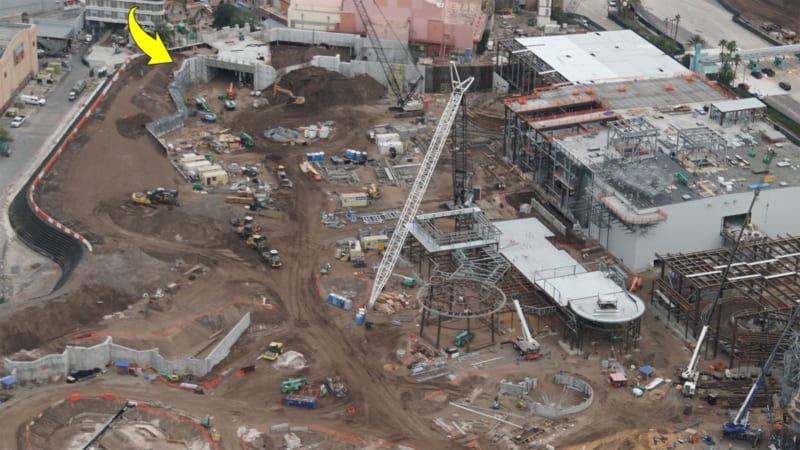 We wondered how Star Wars Galaxy’s Edge would stay isolated from the rest of the park, well Rock formations are being built on the new hillside which isolates it from view.  You can see the dirt piled up outside and inside the section next to the concrete of the Grand Avenue tunnel: 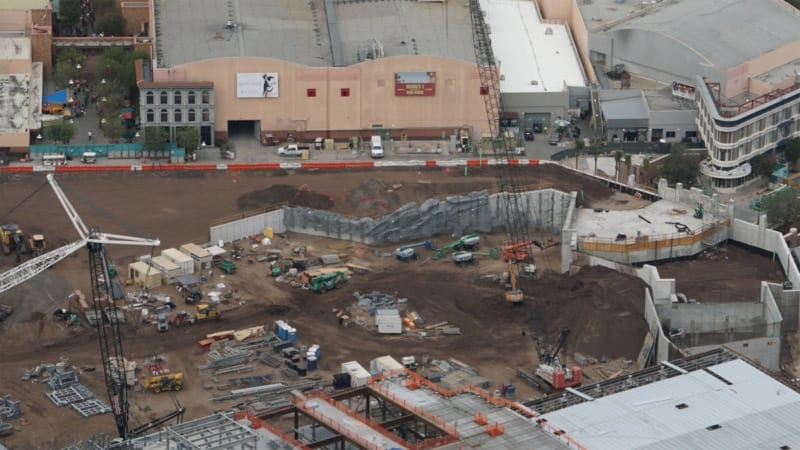 Huge cement wall being put up to separate the First Order Battle Escape attraction (now called Rise of the Resistance): 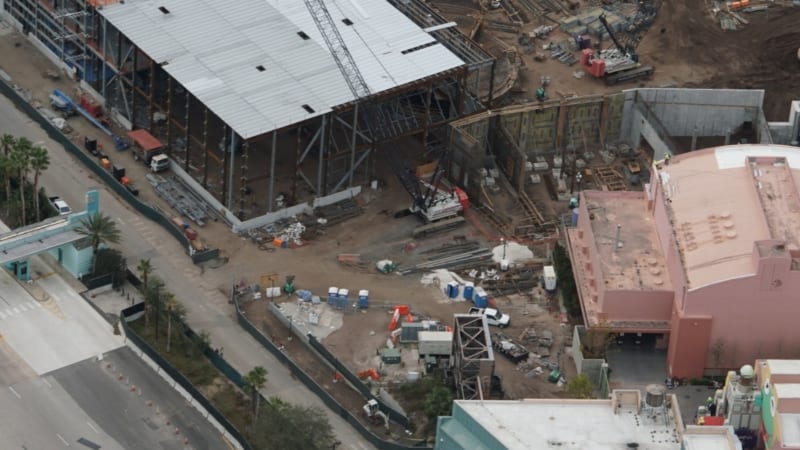 Of course the support buildings will be hidden, and here you see a dirt hill being raised to make sure that is the case: 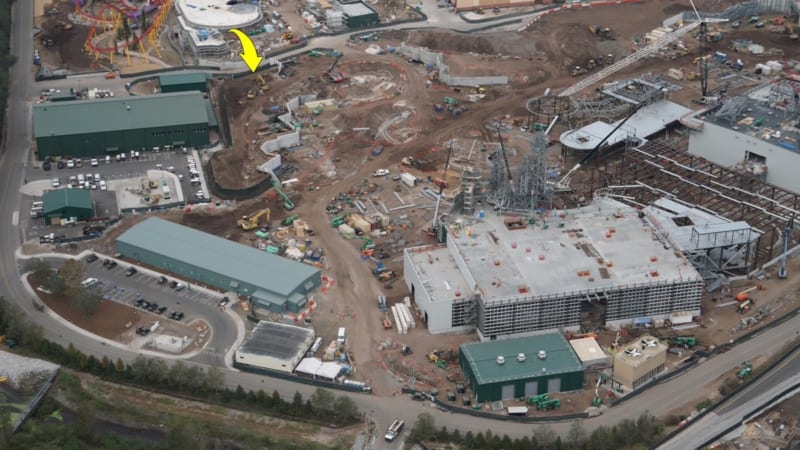 The entrance in front of Grand Avenue however won’t be the only one for Star Wars Galaxy’s Edge, in the middle of this shot you can see where the second entrance will be between Toy Story Land and Galaxy’s Edge.  This will be the only difference between the Hollywood Studios version and the Disneyland one, which will have 3 entrances. 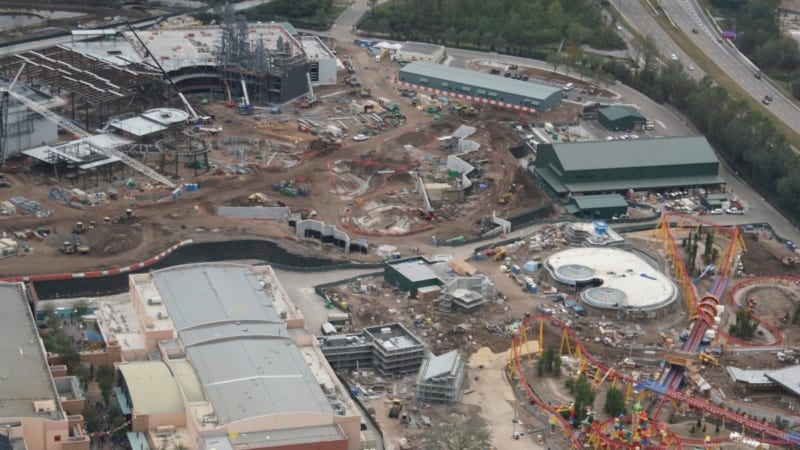 Some new buildings beside the attraction buildings are being worked on like this one which will house a restaurant and shopping area: 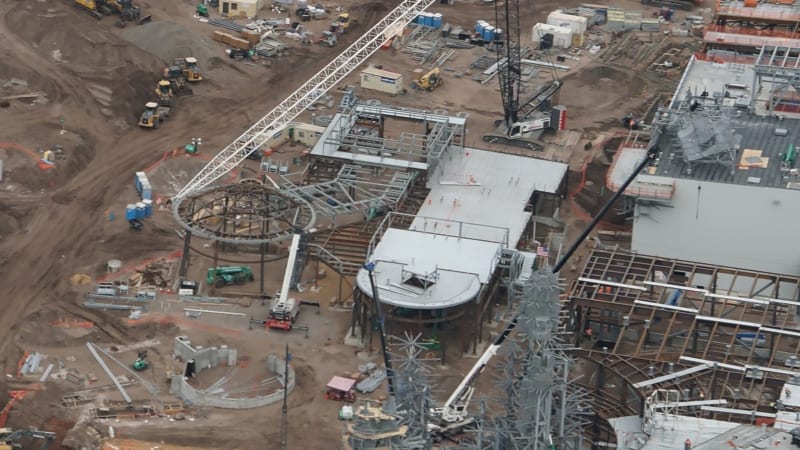 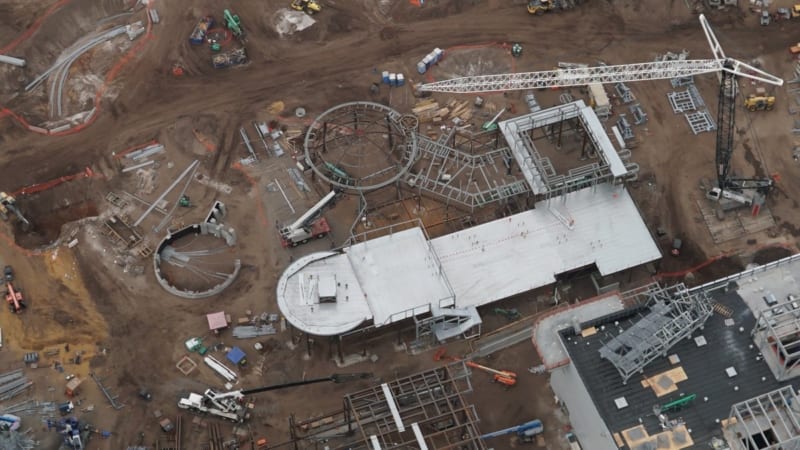 Here’s the latest view of the First Order Battle Escape building.  We can see the attraction is now totally covered with the roof fully on.  This roof will have a very complicated series of duct work once done, and entrances will allow access above the 2 giant AT-AT’s that are buried under there: 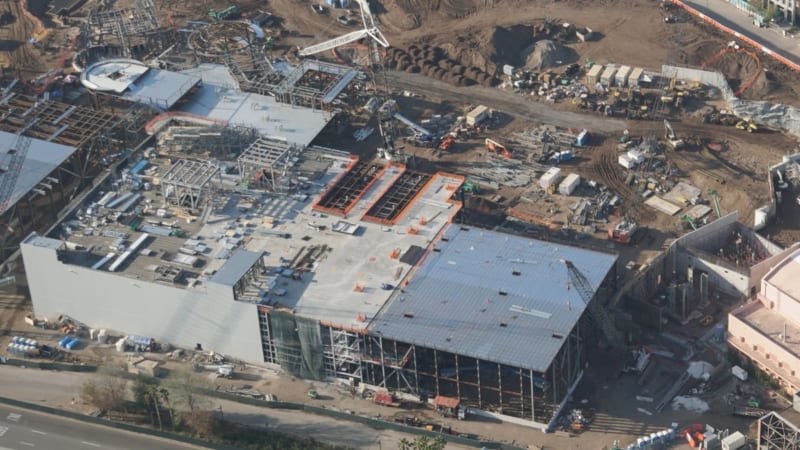 Just look at the difference from this Galaxy’s Edge construction update just 3 months ago, you can still se part of the ride system:

Next we move over to the Millennium Falcon attraction: 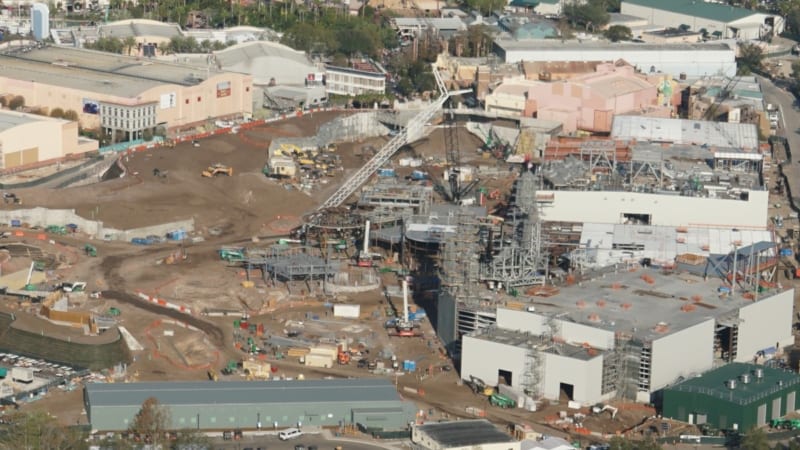 You can see the rock work going up on top of the building.  This whole building will eventually be hidden from the public’s view, with a mountainside hiding everything but the entrance to the attraction where the Millennium Falcon will sit: 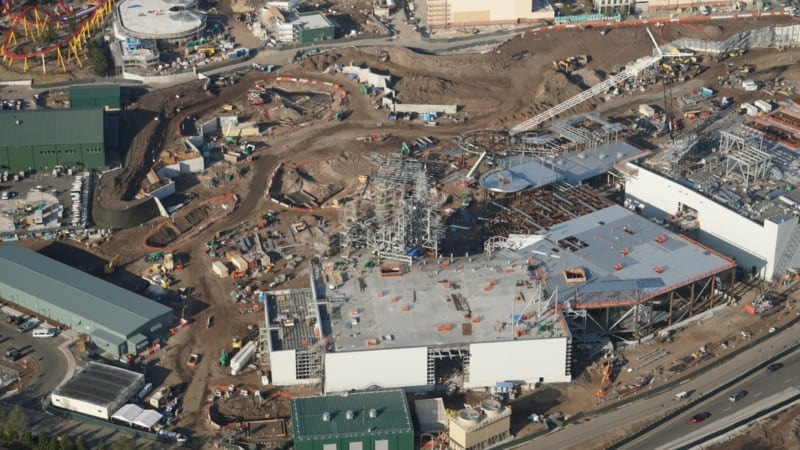 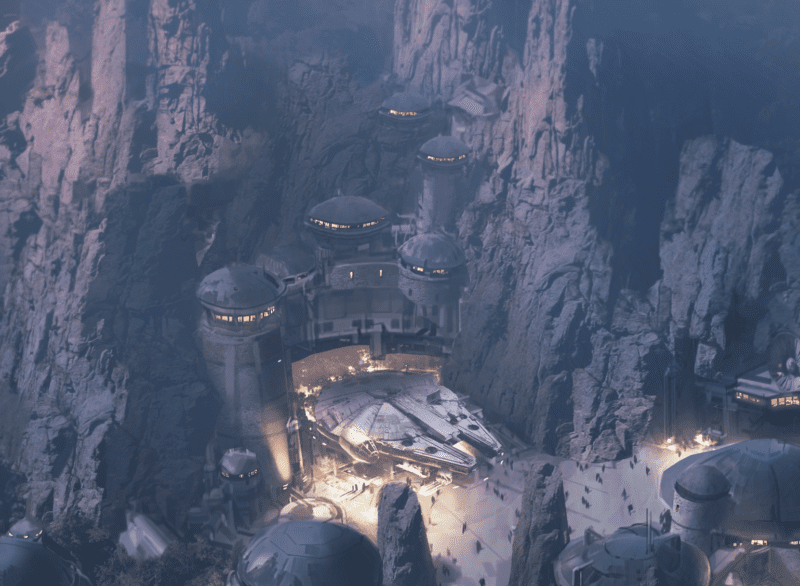 We even get a couple shots from the side that show the inside of the attraction: 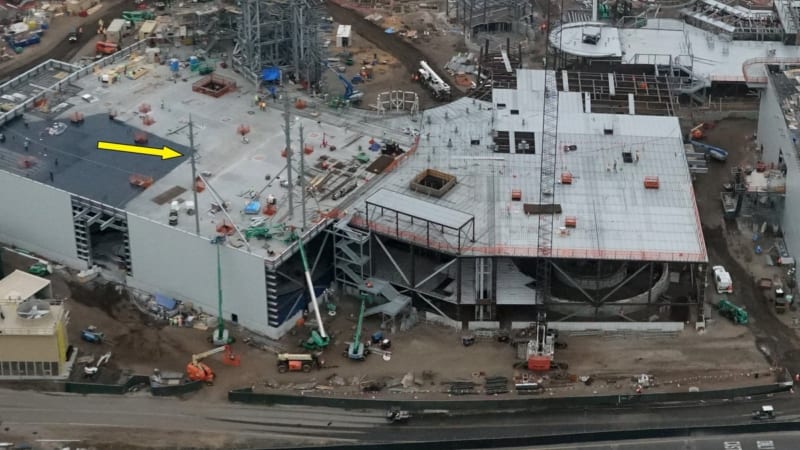 You can still see the circular ride systems that will power the ride simulation under the roof: 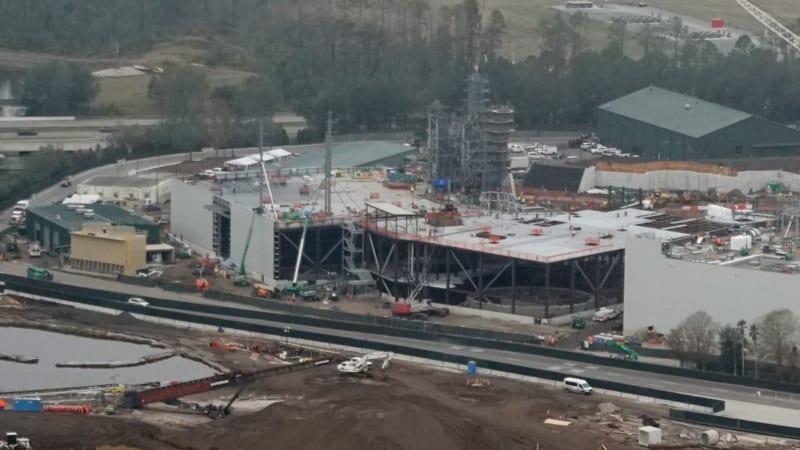 Speaking of the Millennium Falcon, here’s a shot that Disney released of the inside of the ride queue: 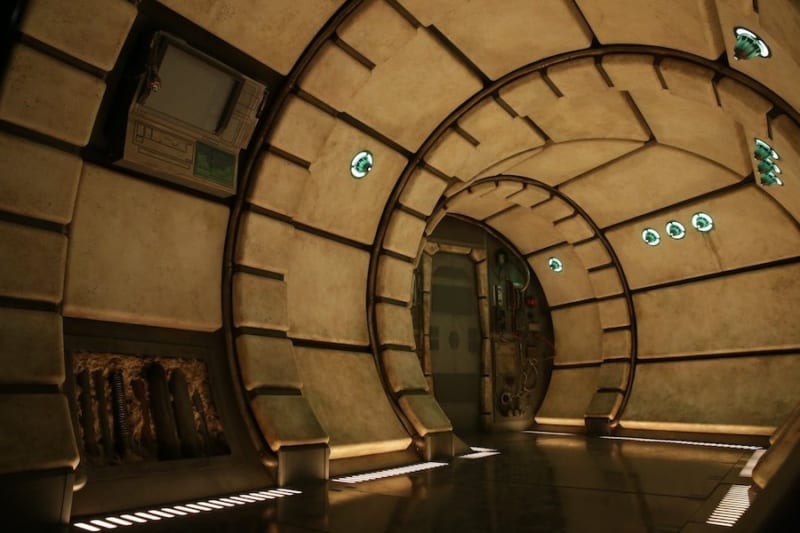 With every passing month we get more and more excited with every Star Wars Galaxy’s Edge construction update.  While we still don’t have an opening date, recent construction permits that were filed could indicate a Fall 2019 opening for the Hollywood Studios version.  Stay tuned for more…

I want to know what you think about the Star Wars Galaxy’s Edge construction update for December 2017.   What do you think of the progress on the land and attractions?  What are you most looking forward to?  Let us know in the comments section below!