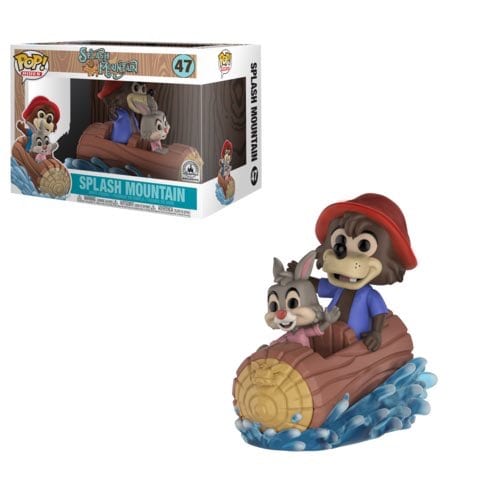 (UPDATE) If you are a Disney Funko Pop Vinyl collector, then you might be in for a real treat later this month.  First, according to the Twitter account Nerd Therapy a Splash Mountain Funko Pop Vinyl is coming to Disney parks on August 25th.  (This rumor has now been confirmed).  Anyone who follows the Funko figures knows that Disney has released a long line of Disney Parks exclusive ones and this could end up being the best of all!

The figure will feature Brer Rabbit and Brer Bear in one of the Splash Mountain logs.  Only conspicuous one not included in the artwork is Brer Fox.  If this Splash Mountain Funko Pop Vinyl does end up coming to the Disney parks it will be interesting to see if more are included with Brer Fox too.

The Splash Mountain Funko Pop Vinyl will be available in both Disneyland and Walt Disney World.  In Disneyland look for it at Disneyana on Main Street and in Critter Country and WonderGround Gallery in Downtown Disney.  And in Walt Disney World you can find it at Frontier Trading Post in Magic Kingdom and Pin Traders in Disney Springs.

One of the biggest Disney parks Funko Pop Vinyls was Figment which released for Epcot’s 35th anniversary celebration.  The line was huge and it sold out that day. If that’s any indication, this Splash Mountain one will be just as popular if not more.

The Splash Mountain Funko Pop Vinyl has a price tag of $39.99.  This is going to be extremely popular so you might as well get those sleeping bags out and stake your place in line now!  Stay tuned for more..

I want to know what you think about the new Splash Mountain Funko Pop Vinyl….