Like India and Thailand, Spain is another Food and Wine Booth that’s back after a long hiatus.  We love Spanish food, some of the options are a Charcuterie Cone, Seafood Salad and of course Spanish Paella!!  I can’t wait to dig in and see how it stacks up against the rest.  Join me for my Spain Review: 2017 Epcot Food and Wine Festival….

Definitely one of the most beautiful booths of Food and Wine, love the house being engulfed in vines.  Looks like a traditional house you’d find in a vineyard somewhere in Spain: 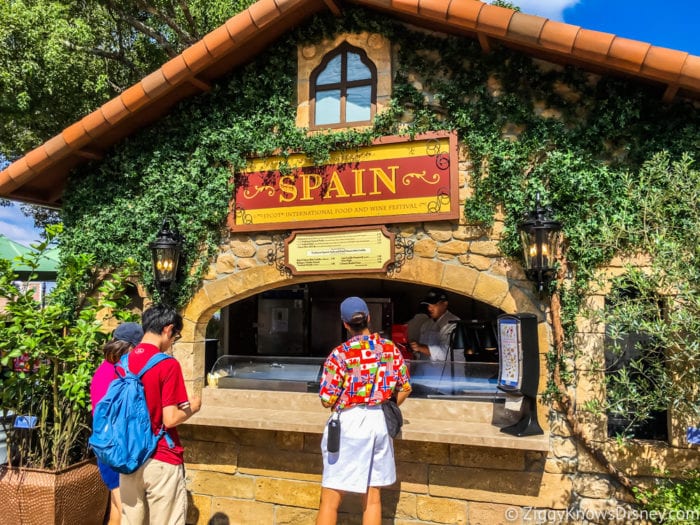 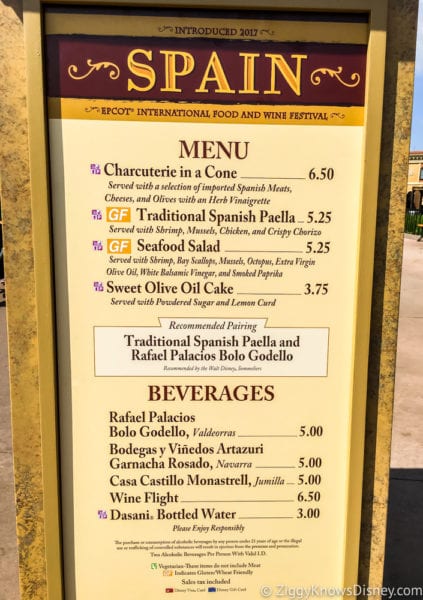 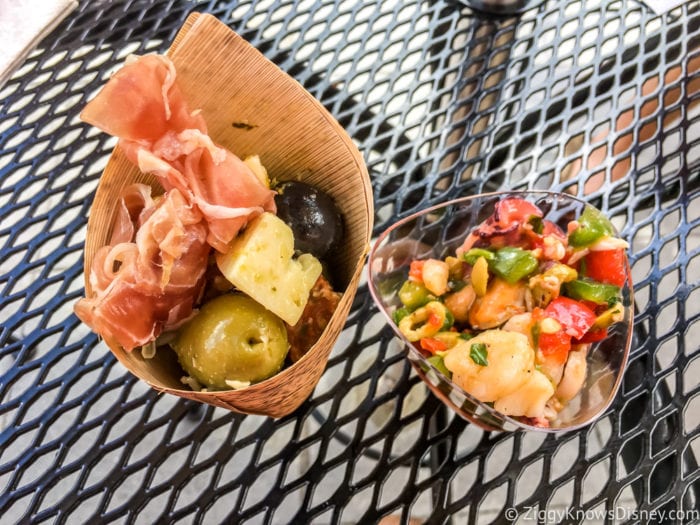 Charcuterie in a Cone and Seafood Salad

First up was something I wasn’t really fond of trying and that was the Seafood Salad with Shrimp, Bay Scallops and Mussels, Extra Virgin Olive Oil, White Balsamic Vinegar and Smoked Paprika.  But Ziggy, you love scallops and shrimp!  Yes I know, but I hate octopus and, the whole thing cold just didn’t appeal to me.  I was wrong though, wow!  This was really good.  Everything in there was really fresh and I ended up really liking the fact it was served cold because it makes for one of the best light snacks you can have at Food and Wine when the sun is baking you and you don’t want anything heavy.  Loved the chopped peppers and olives, just fantastic!  It even came in #10 on my Best NEW Items at 2017 Epcot Food and Wine list.  Only complaint is it’s a little small for the price, but it’s a minor one. 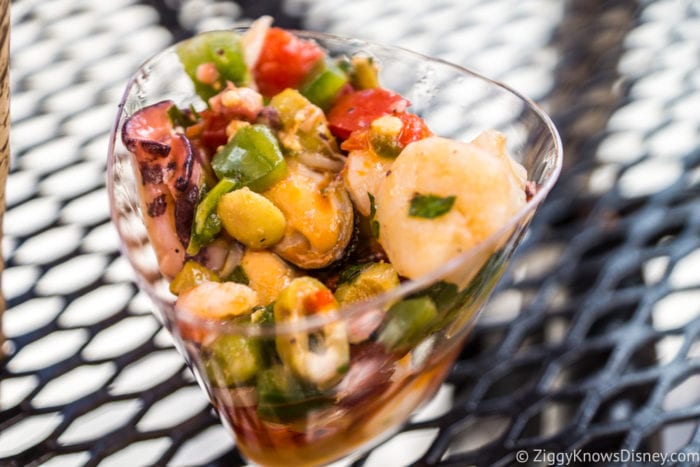 Meat and Cheese in a cone?  Where do I sign up?  At Spain for a Charcuterie in a Cone with a selection of imported Spanish Meats, Cheeses, Olives and an Herb Vinaigrette.  Spain like Italy is known for it’s sliced meats and here you have a traditional prosciutto crude, sliced paper thin, as well as some salami.  Prosciutto was just as good as in Italy, very delicate and salty, with the right amount of fat, rendering it like velvet.  Salami was really tasty too and a little spicy.  I’m not sure what kind of cheese was inside, it was sharp and almost like a Spanish version of cheddar, or similar.  If you like olives you will love this too because they are also very good, not mushy but nice and fresh.  Again like the Seafood Salad is the portion isn’t big.  It seemed right when I started digging in, it was gone, so not suitable for sharing.  If they upped the quantity of stuff this would be one of my favorite dishes of the whole festival. 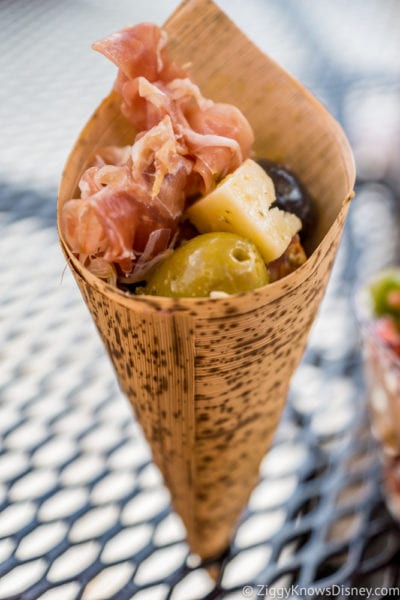 Charcuterie in a Cone with a selection of imported Spanish Meats, Cheeses, Olives and an Herb Vinaigrette

If there’s one Spanish dish that’s famous around the world this is it: Traditional Spanish Paella with Shrimp, Mussels, Chicken and Crispy Chorizo.  You could bring me a bucket of this stuff and just leave me there for a few hours and I’d be perfectly content.  Here you get 2 mussels and one medium sized shrimp.  A little stingy price-wise compared to other seafood dishes (aka the Seared Scallops in Coastal Eats), but the flavor was excellent.  It didn’t quite have the same flavor as the paella in Spain the country, but it was reasonably close.  Could have been a touch less dry, but that’s understandable when making rice for so many people.  The Paella was another solid offering for Spain and worth eating. 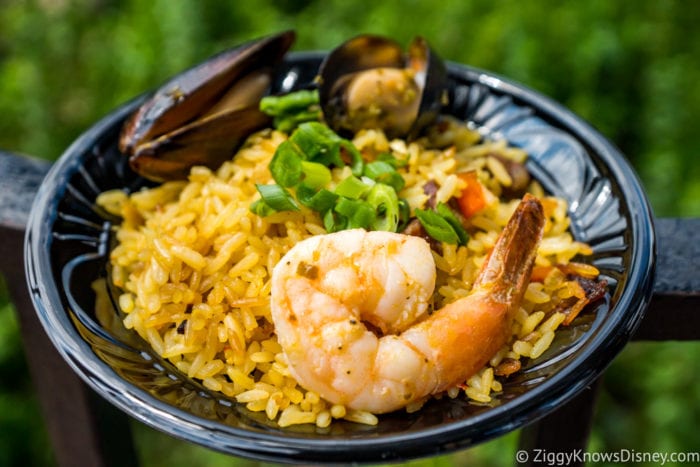 For dessert there is the Sweet Olive Oil Cake with Powdered Sugar and Lemon Curd.  Cakes made from olive oil is really big in Europe, and even though I’m there often, my taste for cake remains strictly American.  You know, the huge, buttery, sugar filled kind!  The taste of the cake itself wasn’t bad, like I suspected, it was just too dry.  I love lemon curd, but there needed to be more of it to make up for the lack of moistness in the cake.  Not terrible, but you can do better at Food and Wine.

Spain overall is a really good marketplace, with all of the savory items worth trying agin, but none totally standing out from the pack.  If you want fresh and light, go Seafood Salad or the Charcuterie Cone.  If you want something a bit more traditional the paella is good also.  If they worked on their portion sizes Spain would be a contender for Best Epcot Food and Wine Festival Booth, but they’re not there yet.

If you have to get just one thing: Seafood Salad

I want to know what you think of my Spain Review 2017 Epcot Food and Wine Festival.  What was your favorite item here?  Let us know in the comments section below!