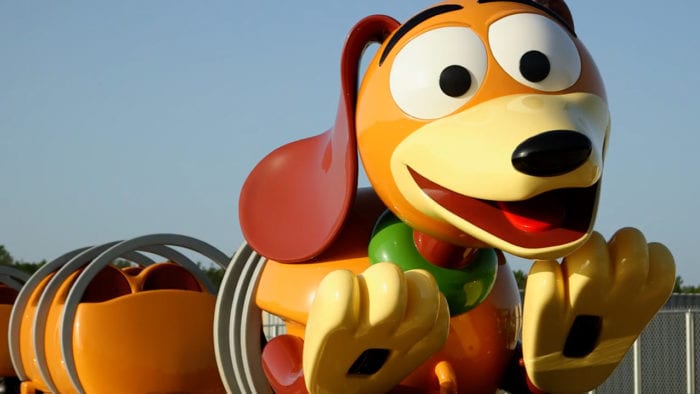 Naturally the ride vehicle is themed after the character Slinky from “Toy Story,” and it’s really beautiful!!  It took Imagineers a few years on the design, so you can imagine how excited they were when the finished vehicle arrived at Hollywood Studios.  Just looking at it you can even see Slinky’s personality shining through in the look of the vehicle, and it’s also been designed to mimic the movement and motion of a slinky toy.  Just look at the big smile on his face!  I think the Imagineers dis a fantastic job creating his likeliness!  It will be interesting to see it up close and in action.

“This is a ride for the whole family: it’s fun, it’s exciting, it’s thrilling, but it’s not scary,” said Imagineer Bob Vignec. “It’s a rollercoaster, but it’s also this fun character that will be out in the land. You sort of get a little bit of goosebumps seeing it here for the first time.”

See the excitement and reactions of Disney Imagineers over the Slinky Dog Dash vehicle in this video posted by the Disney Parks Blog:

There were some questions about whether or not there would be only one Slinky Dog Dash ride vehicle or multiple, well just looking at the new detailed Toy Story Land Model in the newly remodeled Walt Disney Presents shows there will be at least two vehicles (looks like 2 running simultaneously) and surely there will be backup vehicles when ones need servicing.

Check out my detailed 4K Video of the Toy Story Land Model here:

The Slinky Dog Dash Coaster is expected to open with Toy Story Land in Summer 2018, along with the Alien Swirling Saucers.  I for one can’t wait to see more what Toy Story Land is going to bring, so stay tuned for more!

I want to know what you think about the Slinky Dog Dash Ride Vehicle.  Do you like the design of it?  Which attraction in Toy Story Land are you most looking forward to?  Let us know in the comments section below!