The rumor mill never stops spinning with Disney and being only one week away from the D23 Expo 2017 things are moving fast.  The latest is the possibility of an entire Zootopia Land coming to the Animal Kingdom.  While it may sound far-fetched, it actually makes sense on many levels.

First the film Zootopia had massive success in the box office bringing in over $1 Billion in 2016, and was my personal favorite Disney animated film of the last few years.  That being said, inevitably because of the huge success of Zootopia it’s almost 100% that there will be a Zootopia 2 sometime in the future (When has Disney ever declined making a cool, easy $1 Billion +?), and a Zootopia themed land would fit the bill perfectly.

Where would a Zootopia Land go?

Disney’s Animal Kingdom would be perfect to hold a Zootopia Land.  Obviously it wouldn’t fit in Epcot or the Magic Kingdom, and even if Hollywood Studios is becoming a smorgasbord of Disney film properties, there isn’t room there and there are already two major projects in the works (Star Wars Land and Toy Story Land), with another very strong rumor of a Mickey Ride replacing The Great Movie Ride.  Including those reasons, plus the fact that the theming of Zootopia fits perfectly in the Animal Kingdom, that makes the most sense. 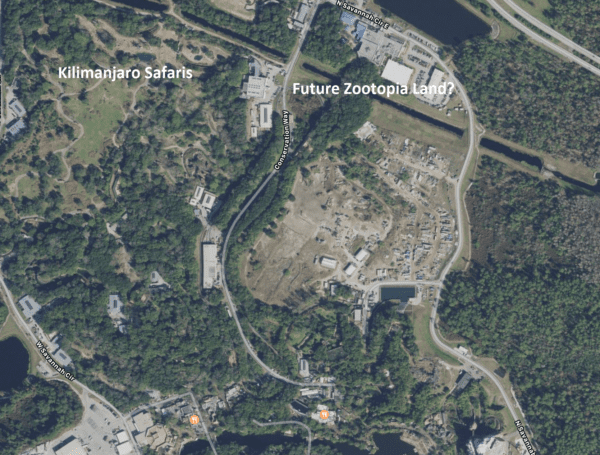 Expect at least one E-ticket attraction in Zootopia Land and one or 2 other smaller ones, as well as themed dining and shopping.

When could Zootopia Land be built?

Also Disney is currently in the middle of a ton of domestic park expansions, the Hollywood Studios projects I already mentioned for example, and a complete Epcot overhaul to celebrate the WDW 50th anniversary.  Obviously Disney’s priority is going to be with those other parks for a while.

Again this is all unconfirmed as Disney hasn’t said anything yet about a Zootopia Land, but seeing as Disney apparently has an expansion in mind for the Animal Kingdom, it’s fun to think of the possibilities.

Stay tuned to our coverage of the D23 Expo as I’ll be there bringing you live and up-to-the-minute coverage of the event.  Also check out my D23 Expo Tips for First-timers, and my Top 10 D23 Expo 2017 Rumored Announcements so you know what to expect next week!

I think that zootopia land in Animal Kingdom is perfect for animal kingdom.

I'm divided on this, it fits as far as the animals, but it's a bit contrary to the vision of the Animal Kingdom as far as conservation, etc. I think it has a lot of potential though for sure, it depends how they do it...