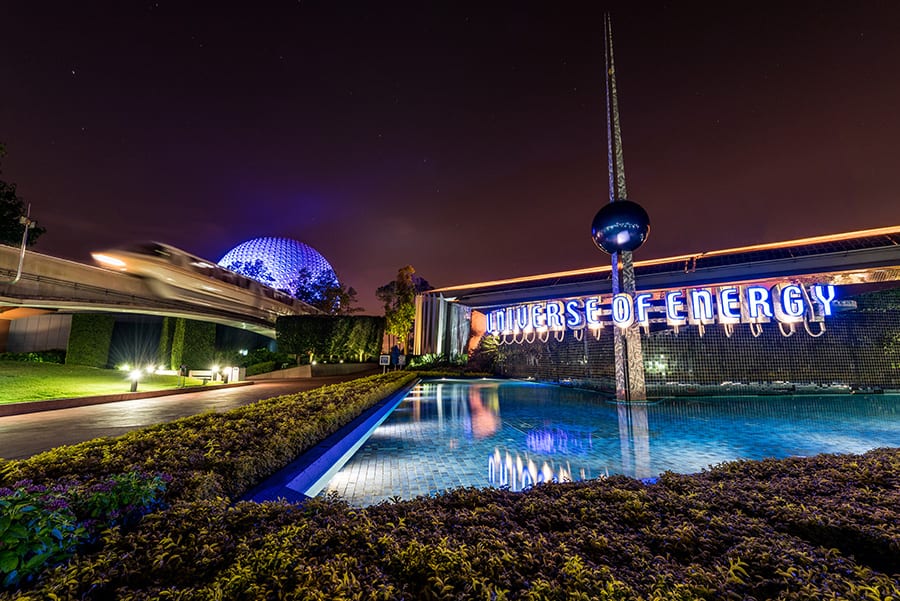 We told you almost a year ago about the rumors of the Universe of Energy closing and a replacement coming, perhaps a Guardians of the Galaxy attraction.  Even after there were land surveys done and many Disney insiders swearing to its occurrence, the voices calmed and we didn’t hear anything for a while.  Now it’s looking more and more likely that those rumors are true.  According to WFTV permits were filed a couple days ago for what might be a Universe of Energy replacement attraction.

Plans were filed with the South Florida water management district by the Walt Disney Company, in order to seek approval to fill in the canal and pave part of the forest behind the Universe of Energy attraction on the eastern part of the EPCOT parking lot.  The project submitted is roughly 1.2 million square feet and includes the attraction also.

Below is a areal shot of the Universe of Energy and the project boundary with the canal indicated: 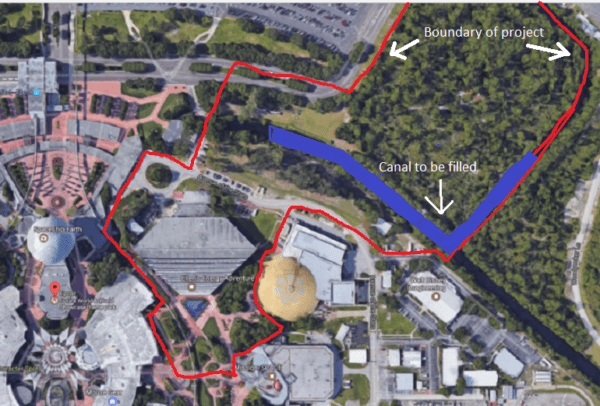 Obviously Disney itself has not yet commented on these files, but according to the documents the purpose is to “provide more contiguous area for possible future changes to parking capacity and back house areas” and name Walt Disney Imagineering as the ones behind this project.

This permit doesn’t mention the destruction or any kind of work on the Universe of Energy building, but one can easily see this isn’t a parking lot expansion.  The fact that it includes the Universe of Energy building itself is an indication of something much bigger in the works.  In fact this is the first step towards a larger show building being built behind the current UoE building which would house the new attraction.

You then can expect the likely gutting of the current Universe of Energy building and turning it into a well themed pre-show building that will be connected to the show building behind.

Now what will this new attraction be?  As in the past rumors, things are still pointing towards a Guardians of the Galaxy roller coaster taking this space.  Although it seems the timeline has changed a bit since the original rumors last year.  It’s thought that the ride system for a GotG coaster won’t be ready as soon as they would like, so we’re looking at a 2020 or 2021 target date.  This coincides with what will be Walt Disney World’s 50th anniversary for which Epcot will surely need to be ready.

Animal Kingdom is getting Pandora this year, Hollywood Studios gets Toy Story Land next year and Star Wars Land in 2019, Magic Kingdom is probably getting at least a new coaster of its own, so it only makes sense the Epcot refurbishment with this attraction being one of the highlights is next.

There isn’t any timeline mentioned in the permits, but if approved work could be started in the next couple months.  Again Disney hasn’t commented on any of this yet so until then we don’t know for sure, but things are looking like their going in the right direction for a Universe of Energy replacement.

I want to know what you think about the permits for a potential Universe of Energy replacement attraction.  Would you be happy to see UoE go?  Do you like the idea of a Guardians of the Galaxy Coaster going in it’s place?  Can you think of a better option?  Let us know in the comments section below!