Rey Coming to Star Wars Launch Bay in Disneyland This May 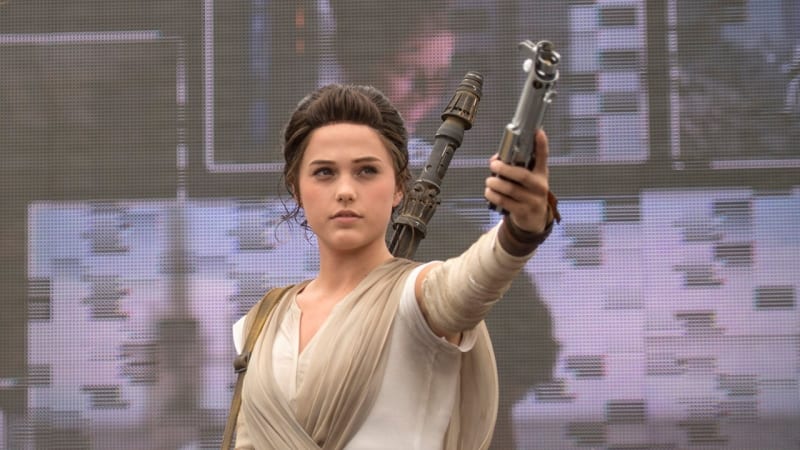 Just because Star Wars Galaxy’s Edge is still under construction doesn’t mean you can’t get your Star Wars fix in the meantime.  Disney made an exciting announcement today about Rey coming to the Star Wars Launch Bay in Disneyland this May.

Right now at the Star Wars Launch Bay in Disneyland’s Tomorrowland you can meet Chewbacca, Darth Vader or Kylo Ren, so naturally since Rey is the star of the latest Star Wars Trilogy, fans will be ecstatic to finally have a chance to meet her there too!

A scavenger from the planet Jakku, Rey is a survivor toughened by life on a harsh desert planet. Despite dismissing herself as “no one,” she learns that her life is being shaped by the mysterious power of the Force. Central to the stories of Star Wars: The Force Awakens and Star Wars: The Last Jedi, Rey has become an inspiration to a new generation of Star Wars fans.

It sounds like the way Kylo Ren and Darth Vader take turns coming out for the character experience for the Dark Side, Rey and Chewbacca will take turns for the Light Side.  Check your Disneyland schedule to make sure you are there at the right time to meet the Star Wars characters you want!  Also head over to Walt Disney World this May for a special Star Wars Galactic Nights in Disney’s Hollywood Studios where you will be in Star Wars heaven for a whole night!

Seems an odd one. Not sure face characters for such iconic roles work outside parades. It isn't quite the same as kids meeting Belle...Rey will be more older kids & adults...Not sure this group will get as excited about meeting someone in a fancy-dress outfit Chewie, jawas and Kylo Ren any day

that's an interesting thought and you're not the first person to mention it to me. I guess we'll have to get used to it though, especially with all the live-action versions of animated classics that are coming out. I think we're going to see quite a bit more of this..