The Taste Track Marketplace is a brand new addition to the 2018 Epcot Food and Wine Festival and one of the ones we were most looking forward to trying.  I mean honestly who doesn’t go crazy for Cronuts??  And Taste Track has 4 of them in all different flavors, plus a Pancake Milkshake!!!  We’ve just gotta know what a $5 shake tastes like!  We couldn’t be more excited to try them out so join us on our Taste Track Review at the 2018 Epcot Food and Wine Festival…

Taste Track is not located in World Showcase, but rather in Future World right next to, you guessed it….Test Track: 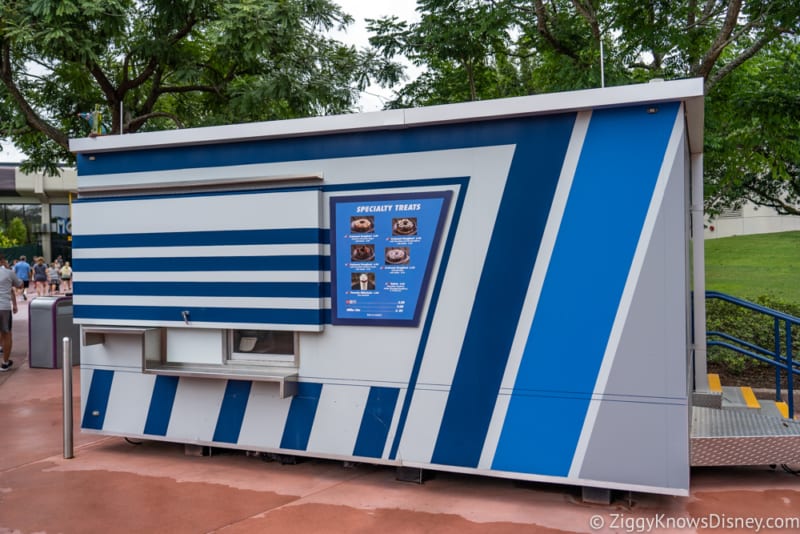 The colors keep in theme with Test Track but it’s really a glorified food truck, nothing incredible.

So Taste Track as you know has 4 varieties of one of my favorite Walt Disney World snacks of all-time the Croissant Doughnut or as it’s more commonly called: The Cronut!  For the Taste Track marketplace at Food and Wine they have 4 Varieties: Cinnamon Sugar (regular one), S’mores, Chocolate Hazelnut Cream (or Nutella) and Sprinkles.  You can even add gelato to each one for $2 extra.

There is also a Pancake Milkshake which sounds amazing too! 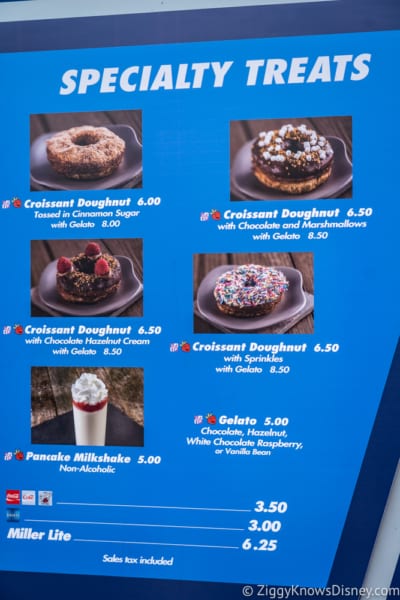 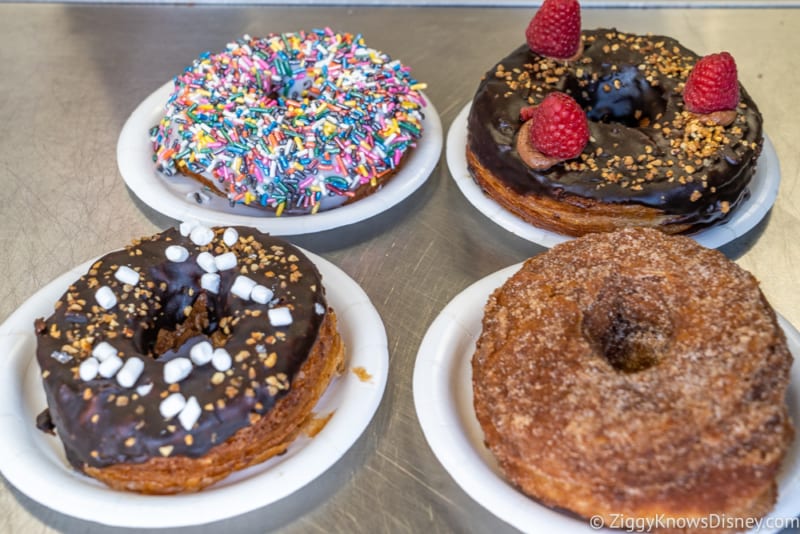 This is classic Disney snacking right here and I’ve had many cronuts through the years along the promenade in World Showcase at their normal home in the Refreshment Port, but this is my first in Future World.  A Cronut is the unholy marriage between a croissant and a doughnut with the outside being round and with a hole in the center, but the dough is flakey and pulls right apart.  They are incredible. 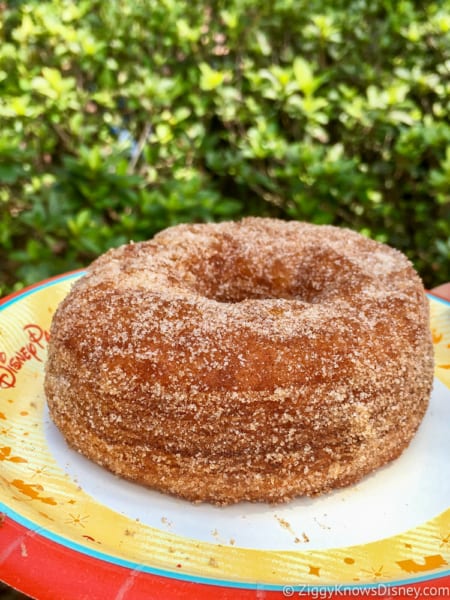 Honestly it was good but a common theme with these cronuts at Taste Track was that for some reason the dough while it looks flakey, was actually a bit too chewy and tough.  This can be quite common here depending on when they were taken out of the fryer.  If they have been sitting around too long, the Florida humidity kills the best part which is the crispiness…unfortunately we didn’t have the best luck with the ones we got…

Croissant Doughnut with Chocolate and Marshmallows ($5.50):

This is the S’mores version of the cronut with chocolate frosting, marshmallows and crumbled graham crackers on top.  I’m a huge S’mores guy so this combo is incredible for me, but the same was true here about the consistency of the dough. 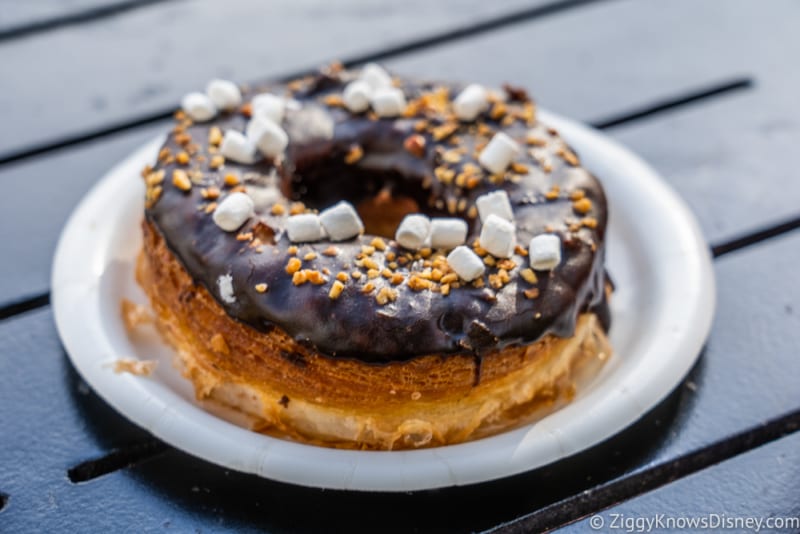 It looks flakey but you see on the left how it folds up a bit, where it usually just flakes off.  I had to really bite down and pull to get it apart: 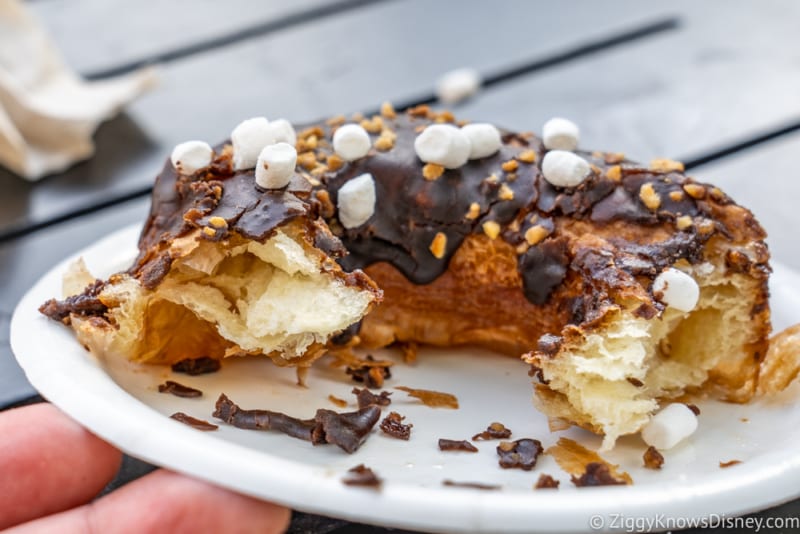 This is the same but with chocolate Hazelnut cream (nutella) on top and raspberries.  Another awesome combo in theory, and the flavors were there, just the same consistency problem.  I thought they gave a a decent amount of chocolate hazelnut cream on top 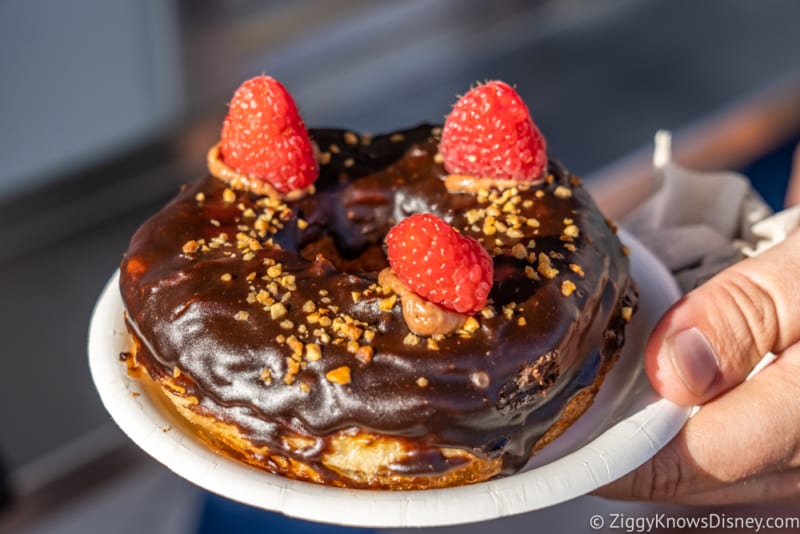 The flavors on this one were really good, lots of vanilla icing and absolutely covered in sprinkles. 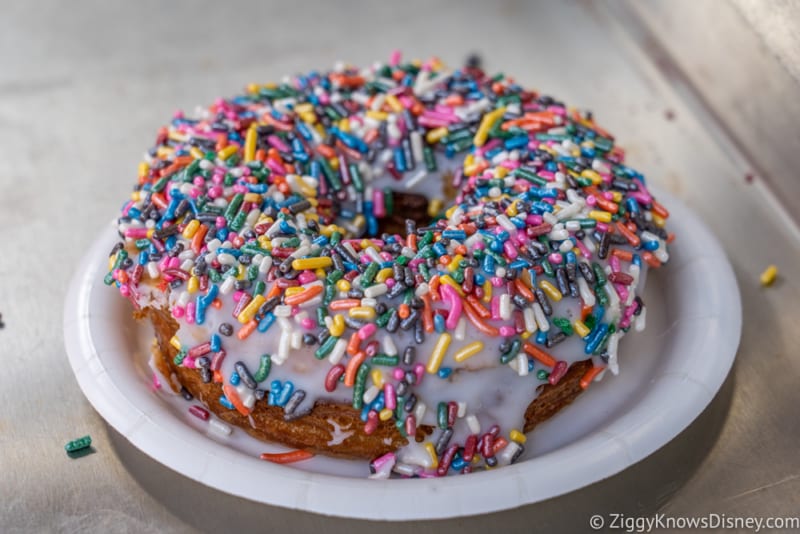 It’s also worth noting that the Croissant Doughnuts are expensive, but they are also really big so they can easily be shared among friends.

So this is a $5 shake?  It’s just ice cream and milk, and they don’t even put bourbon in it, but we couldn’t resist.  We had to know what a $5 shake tastes like!

It’s not the biggest shake, it’s in one of those small Food and Wine glasses, but it’s packed with flavor.  It tastes like someone blended up a pancake, threw in strawberry topping and topped it off with whipped cream.  Almost like Birthday Cake flavor even.  In any case, it was delicious!  My only complaint was that it was really thick and hard to drink with the straw (didn’t they get rid of those recently btw?) and so I ended up eating it with a spoon. 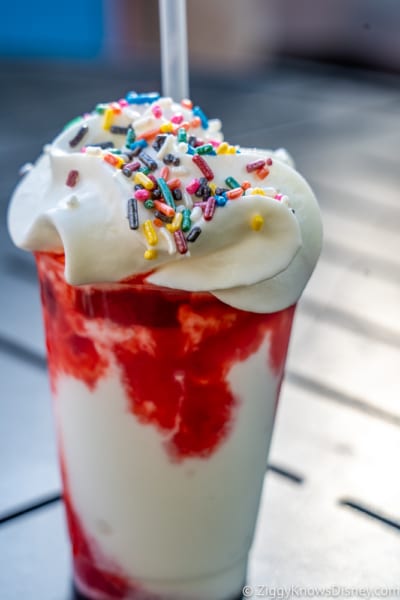 I really wanted to like the Taste Track more than what I actually did.  Don’t get me wrong, the Croissant Doughnuts all had great flavor, great presentations and the sizes were big and one of the best values for the money at the Food and Wine Festival.  Plus the Pancake Milkshake was phenomenal.  The only thing is, I would make sure to ask them how old the cronuts are when you go, because if they aren’t fresh out of the fryer, you’ll be disappointed!  If they are fresh though they’re one of the best snacks at Food and Wine!  I scored Taste Track lower than it could be because of the freshness of the Cronuts, but I’m going to come back again to see if I have a better experience the next time.

If you have to get just one thing: Pancake Milkshake

I want you to be able to have the best info on the Festival so you have a great time and don’t waste your time!  Take a look at all of my 2018 Epcot Food and Wine articles including: