This is a Disney Skyliner Construction Update.  I’ve loved keeping up with the new Disney Skyliner, because every day there is something new to see!  This project is really massive and will connect Hollywood Studios, Epcot and 4 of the Walt Disney World Resort Hotels.

Since our last update, a lot of people have been wondering how the Disney Skyliner will function with all the storms that happen in the Central Florida area.  Well Disney has the answer as a weather measuring system has been installed on the Disney World Skyliner support towers.  We’re also going to look at the big wheels that will make the cables go at the various Disney Skyliner stations.

We’ve also recently seen the towers rise up just outside the France pavilion in Epcot’s World Showcase, to the dismay of many people.  Yes they are visible from even inside Epcot, but honestly I feel like once they are complete and moving, they will actually be an interesting visual element that is pleasing and not a distraction.  We’ll have to wait for the final project to see.

We want to again thank @bioreconstruct over on Twitter.  He takes some amazing aerial photos and allows us to see the parks from a unique perspective!  Let’s see how the Disney Skyliner progress is coming around Walt Disney World!

Let’s start down at the bottom of the map and see the Disney Skyliner Station which will be shared between the Art of Animation and the Pop Century resorts: 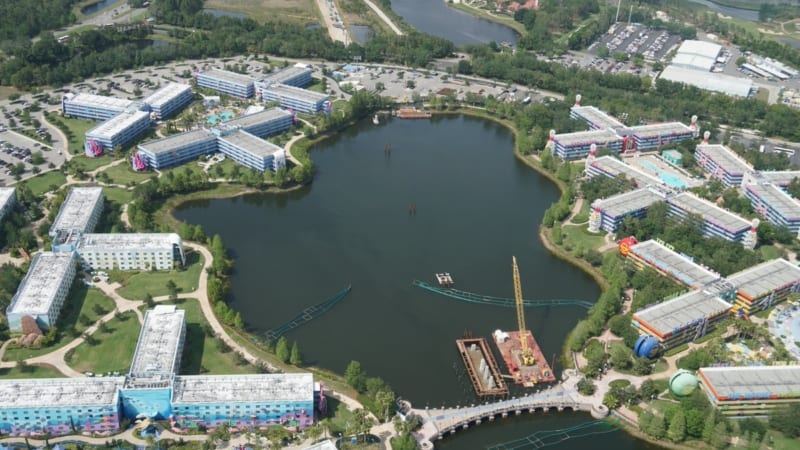 This station will be connected by a bridge and be right in over the water between the two resorts: 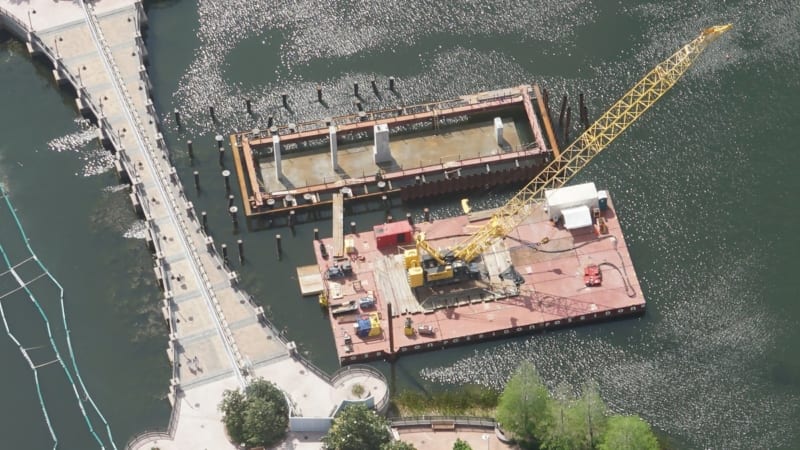 Leaving AoA and Pop Century, we head up to the Caribbean Beach Station: 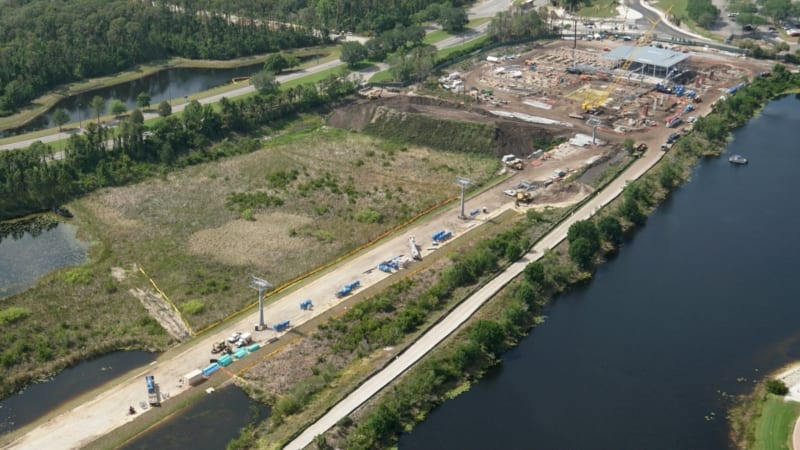 You can see some Disney Skyliner components lined up along the path leading to the station: 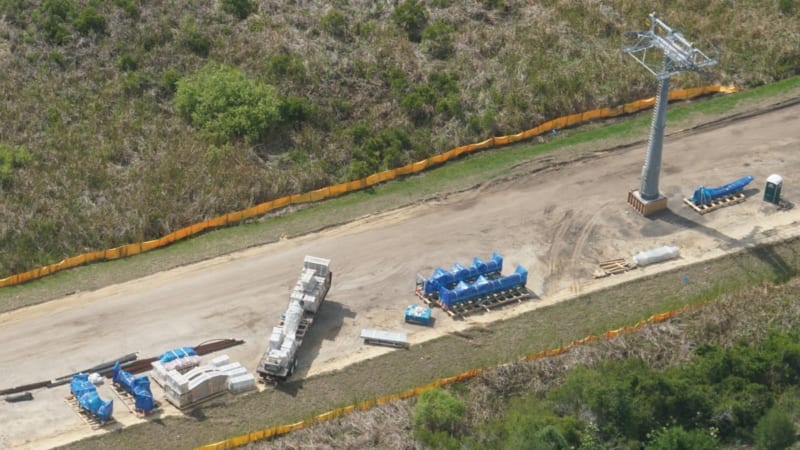 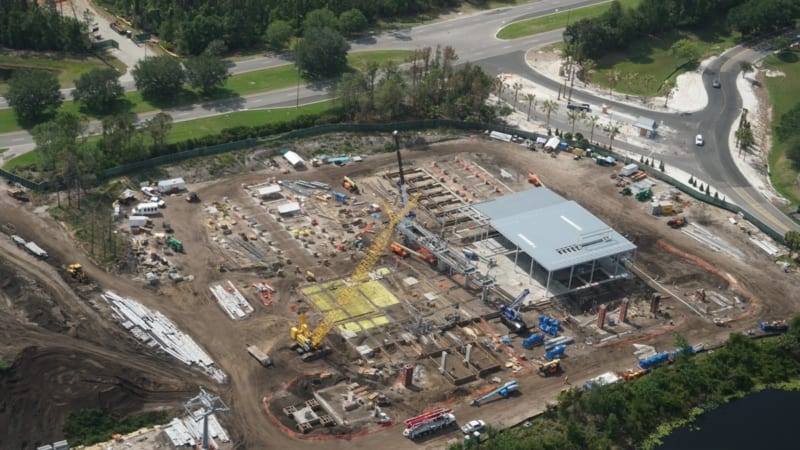 This will be the main hub for the Disney Skyliner and this is where guests will branch off who want to go to Disney’s Hollywood Studios or the various other resorts. The straight metal line in the middle of the forward pointing to the top and bottom will take guests to Hollywood Studios: 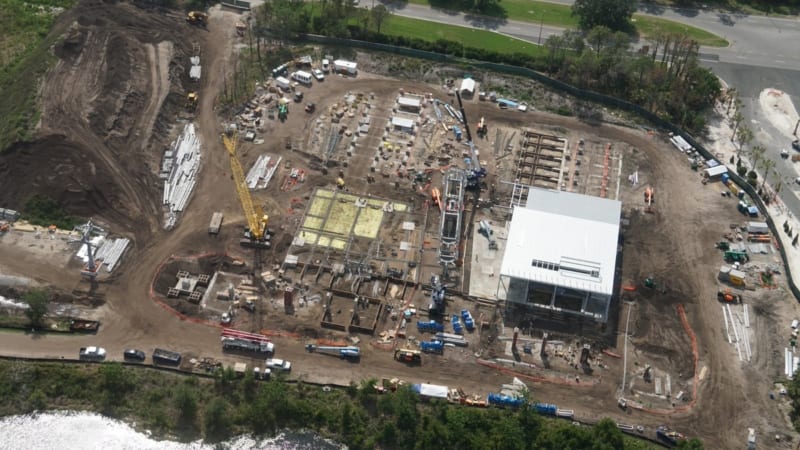 Here’s a better shot of it.  This station is the furthest along of all: 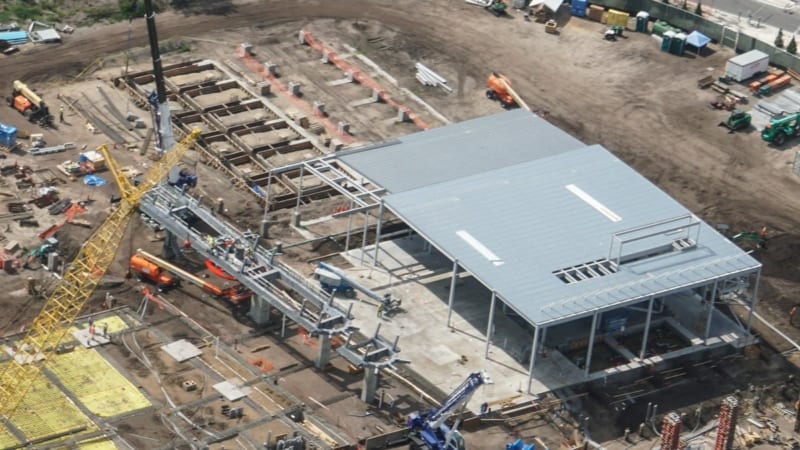 You can see the path through the trees that will be the Hollywood Studios line of the Disney Skyliner: 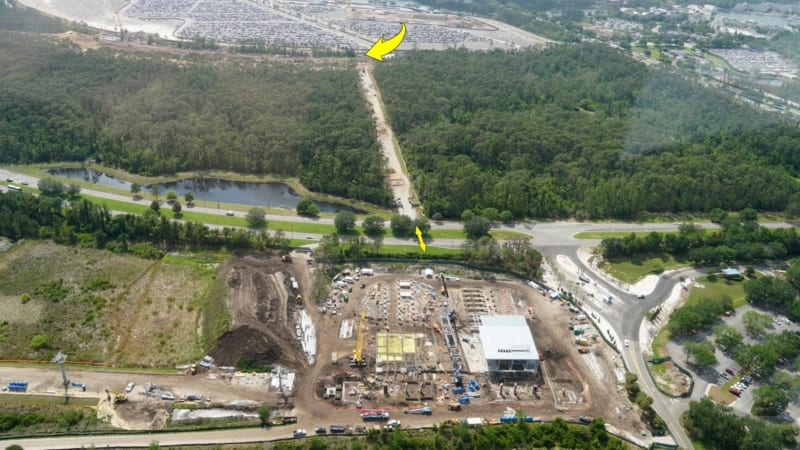 This is another angle of the Hollywood Studios route.  The center arrow shows the Caribbean Beach Station and the top arrow is the JW Marriott currently being built: 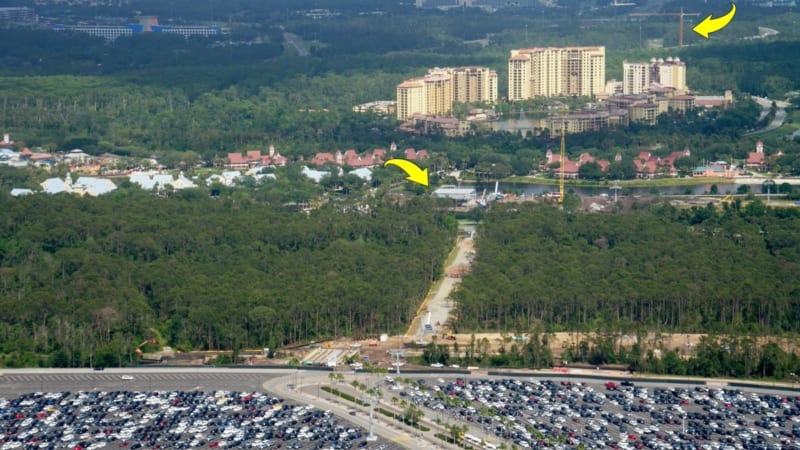 Once the guests ride through the trees they will arrive over the Hollywood Studios Parking lot indicated by the right arrow.  On the top left you can see the Riviera Resort and on the bottom left is the Hollywood Studios Skyliner Station.  The big open space above the station is where the New Bus Loop is going: 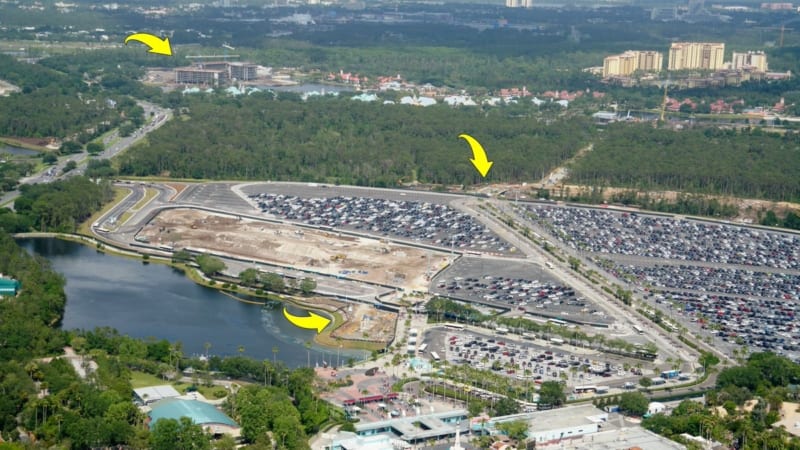 From the ground we can see the progress on the Hollywood Studios Disney Skyliner Station.  Note the columns going up in the middle and to row of Cable Towers arriving from the right side of the photo: 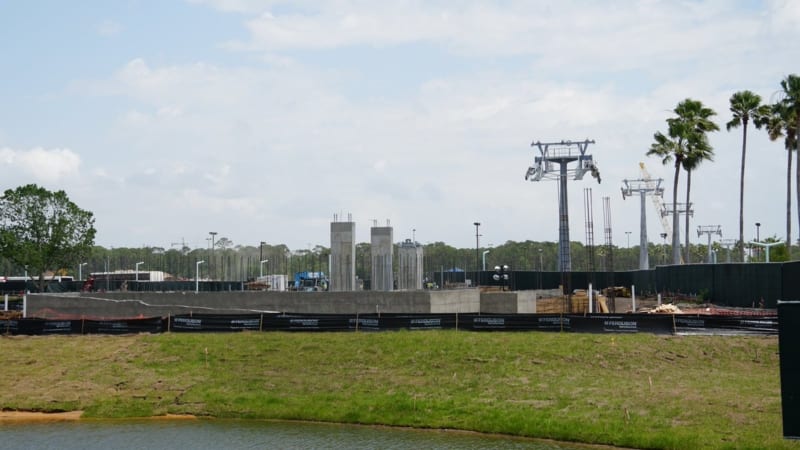 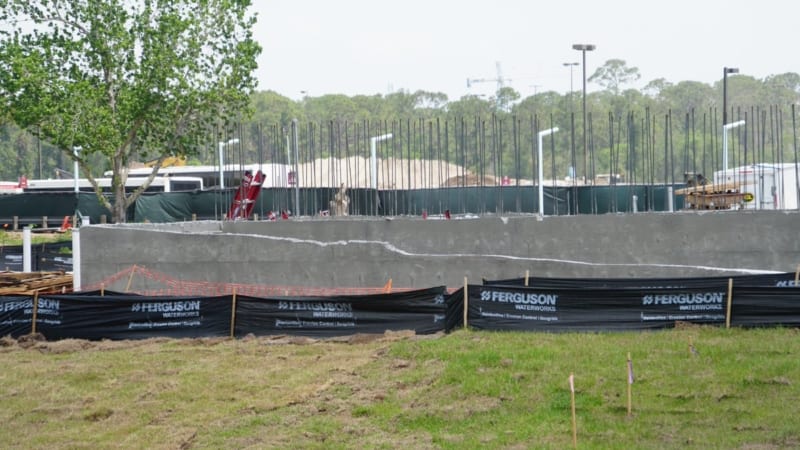 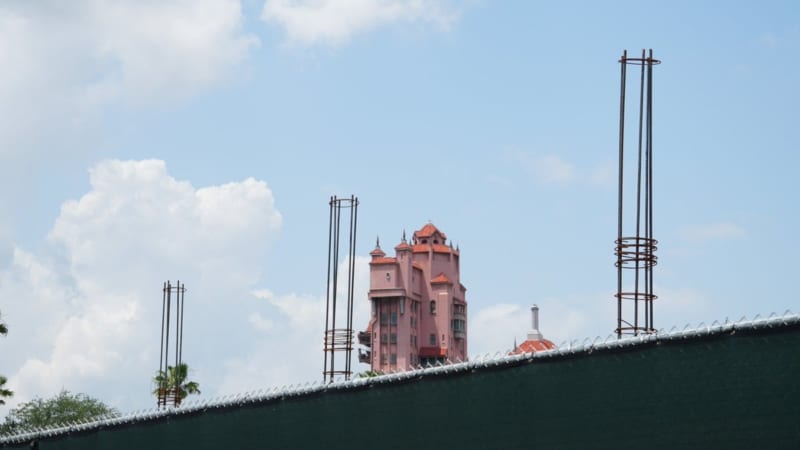 Some staging for the Disney Skyliner Hollywood Studios route: 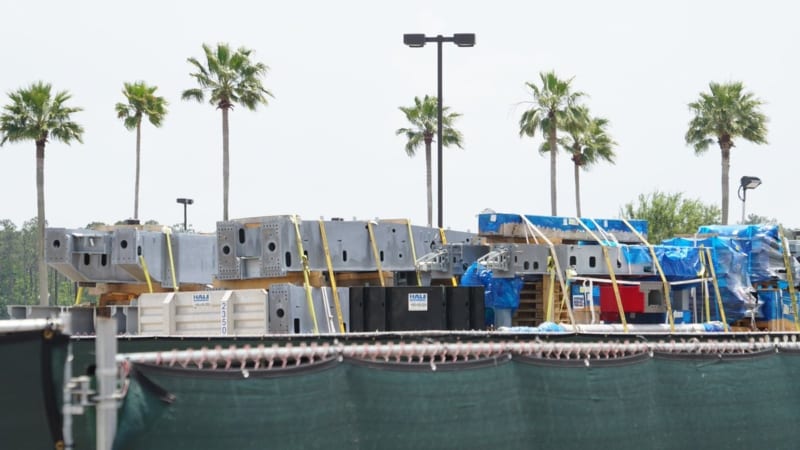 These huge wheels are going to be very important.  These will go at the station and will be the mechanism that spins, pulling the cables and in turn moving the individual cars along the route: 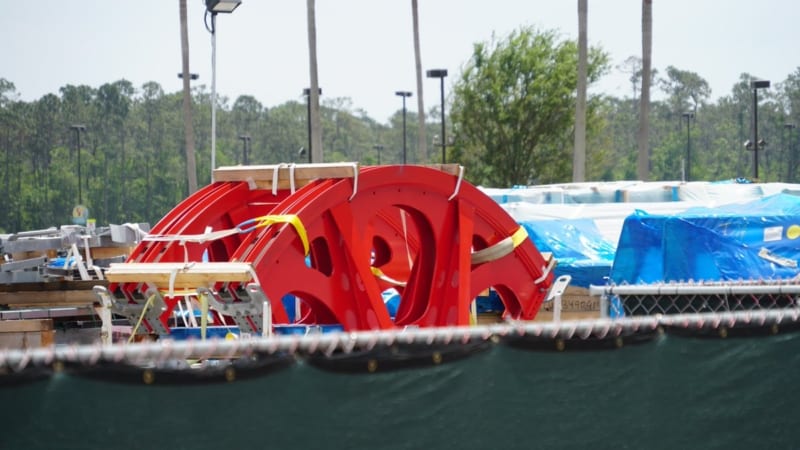 Here we can see another interesting development.  Disney has installed a weather measuring system on the tops of the Disney Skyliner cable towers.  We don’t know how it exactly will work, but it will allow them to monitor wind and weather conditions, shutting down the Disney Skyliner if things get dangerous.  These should be all around property so they will up instant notifications about the weather: 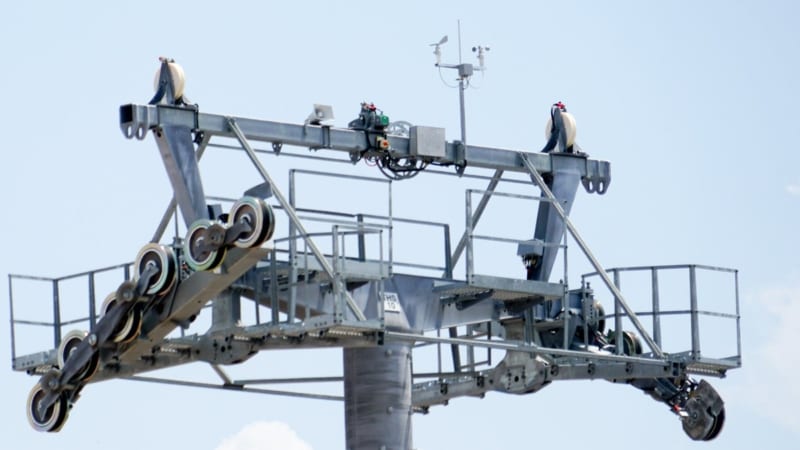 Leaving Hollywood Studios, we head back through the Caribbean Beach station and land at the Riviera Resort Station just up the line.  This one isn’t nearly as developed at the others yet: 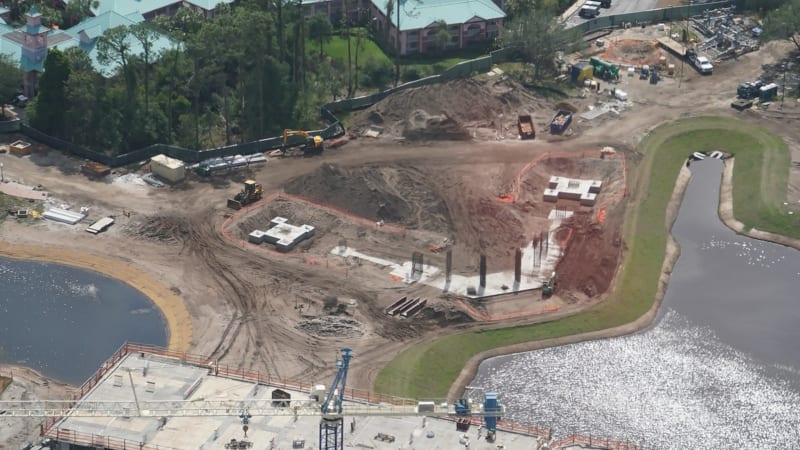 Construction on the Riviera Resort is coming along quite nicely, with a late 2019/early 2020 target date: 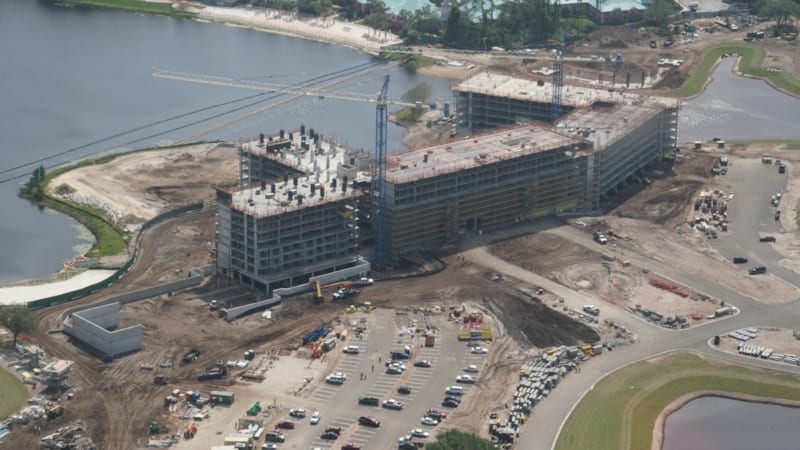 After leaving the Riviera Resort we head up to the last stop, Epcot.  This will be one of the last stretches before arriving at the station and runs parallel to Buena Vista Dr: 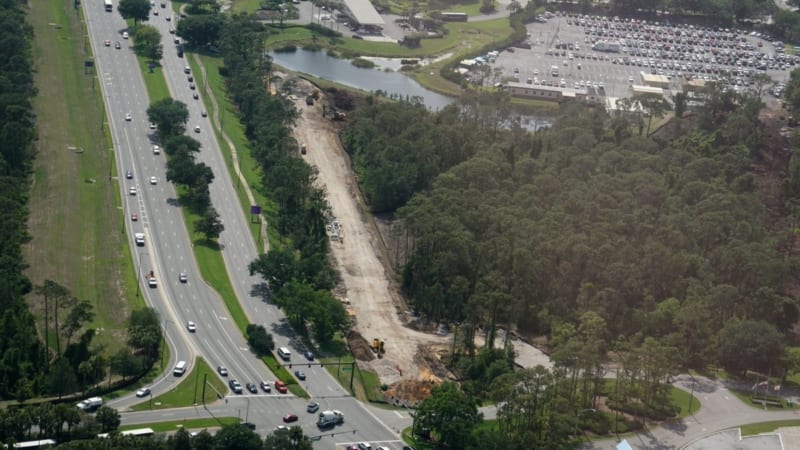 We arrive at the Epcot station outside the International Gateway: 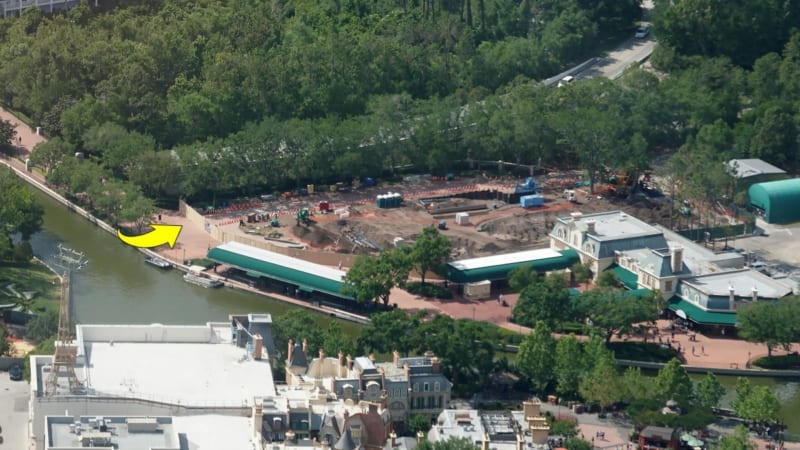 That wraps up our Disney Skyliner/Gondola construction update.  We’ll have more updates soon so keep checking!

I want to know what you think about the Disney Skyliner Weather Measuring System.