Thanks to @bioreconstruct over on Twitter we have some more awesome aerial photos of the Disney Skyliner construction, he always gets the best photos while we can stay on the ground!  Let’s see how the progress at the Hollywood Studios station is coming…

Here we can see the progress going on at the Caribbean Beach Skyliner Station: 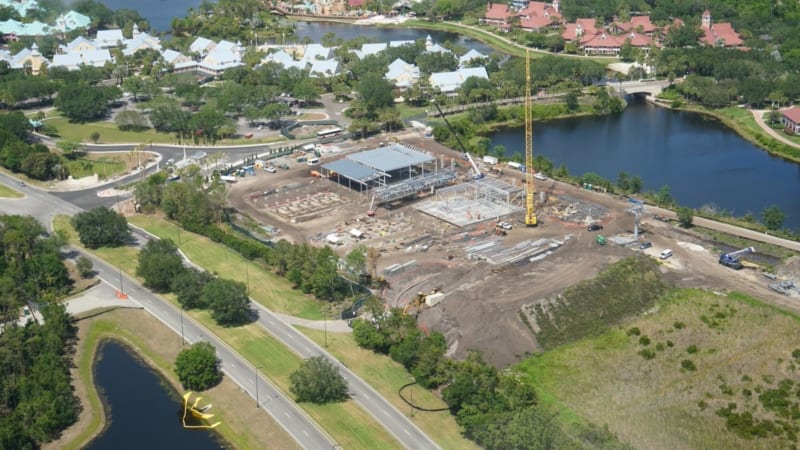 You can see various staging materials lined up along the road leading to the Caribbean Beach station: 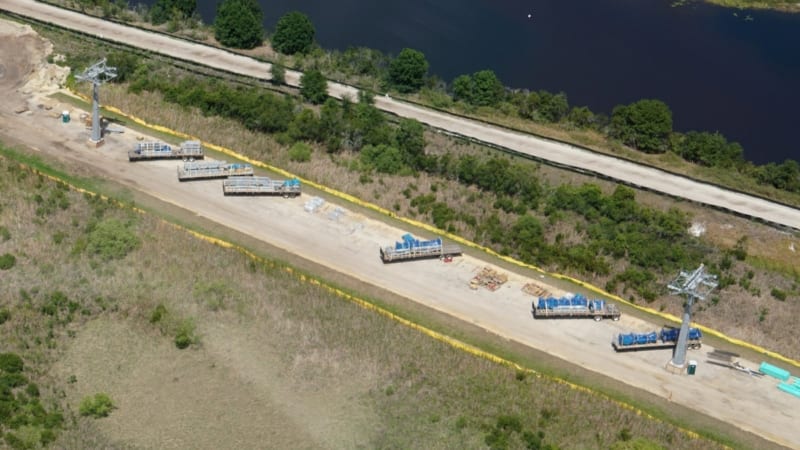 Why are they needed.  Just look at all the construction going on here!  The site for the Disney Skyliner at the Caribbean Beach Resort is absolutely huge!  Don’t forget that it’s going to be the hub station for all the different Disney Skyliner lines, so this is where you’ll be making transfers depending on where you’re going to: 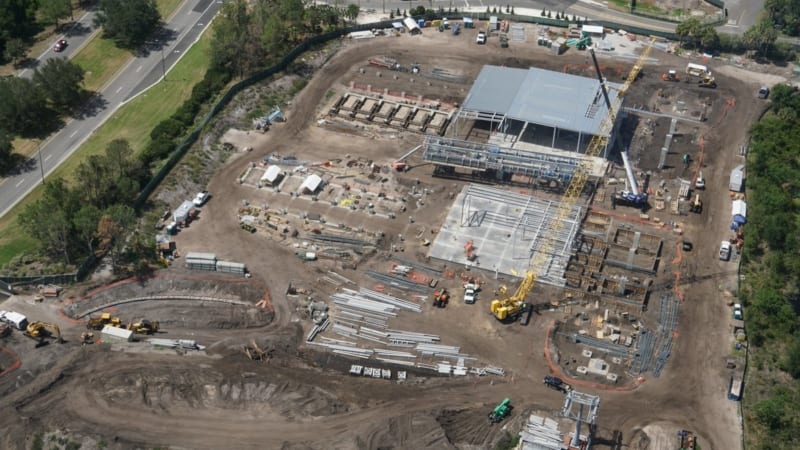 This is a great shot of the Disney Skyliner landing system at the station.  On this mechanism is where the different Skyliner cars will land and then be launched back out.  We really get some great detail here: 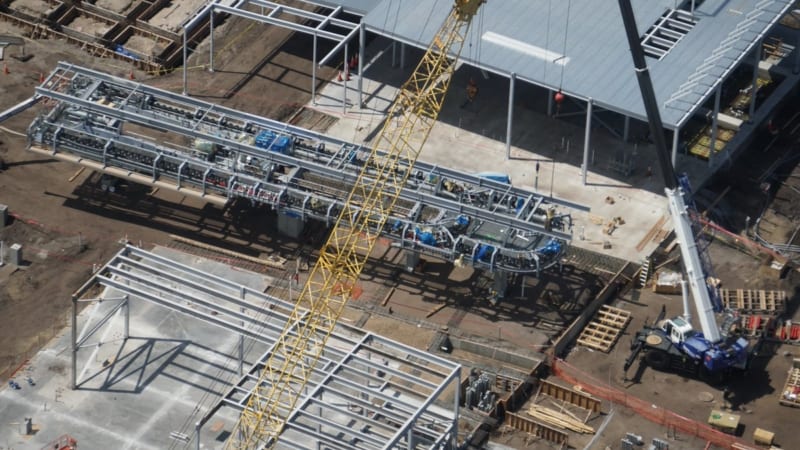 From the Caribbean Beach station you can plainly see the Skyliner path leading through the woods here over to Disney’s Hollywood Studios: 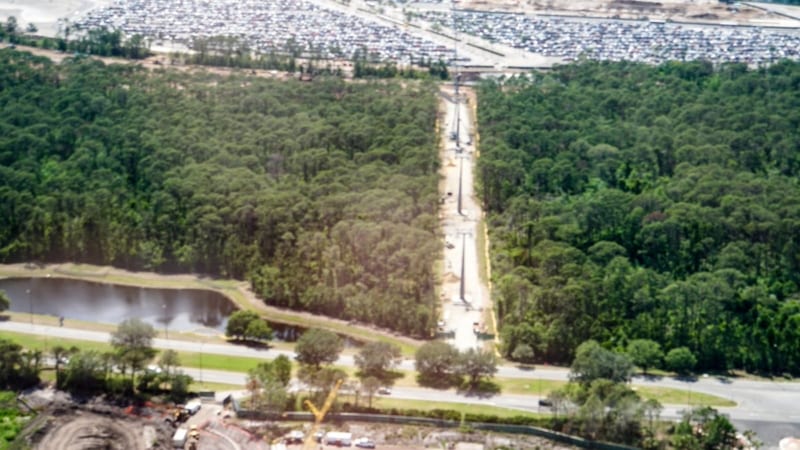 That’s sure an intimidating row of Skyliner Towers: 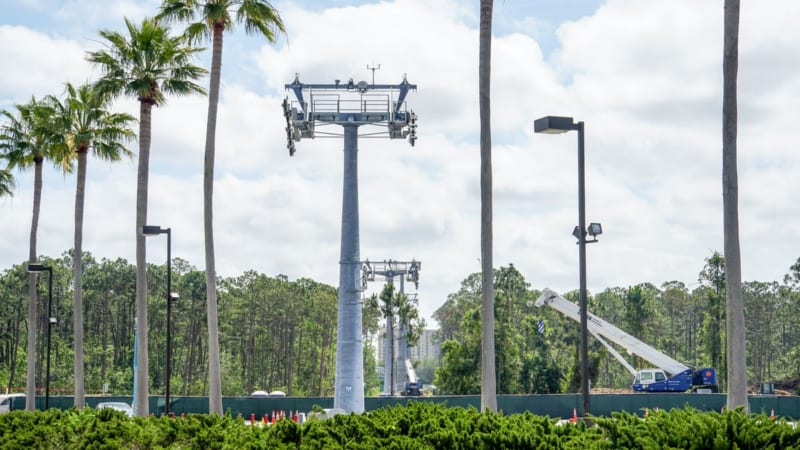 The Disney Skyliner will take guests up and over the Hollywood Studios parking lot (which is getting a huge renovation btw) and over to the Skyliner Station here near the entrance to the park: 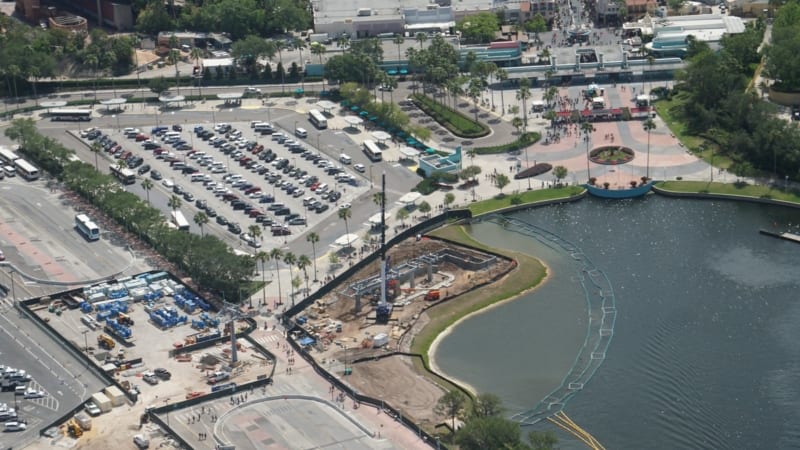 From the bottom side of the Skyliner station here, you can see the old path leading to Hollywood Studios, coming from the Epcot area hotels like the Boardwalk and Yacht and Beach Club.  The sidewalk has completely changed here with the left arrow showing you the old path and the right arrow is where the new one will be: 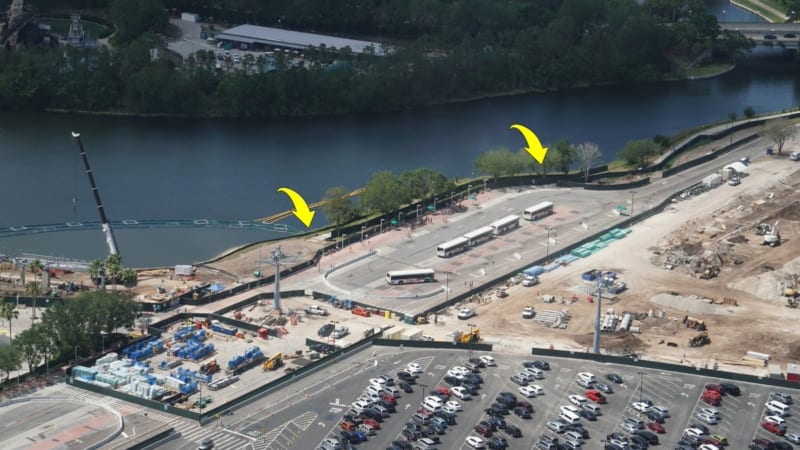 This shot shows again where the old path was, now instead it will empty out into the Bus Loop area just to the left: 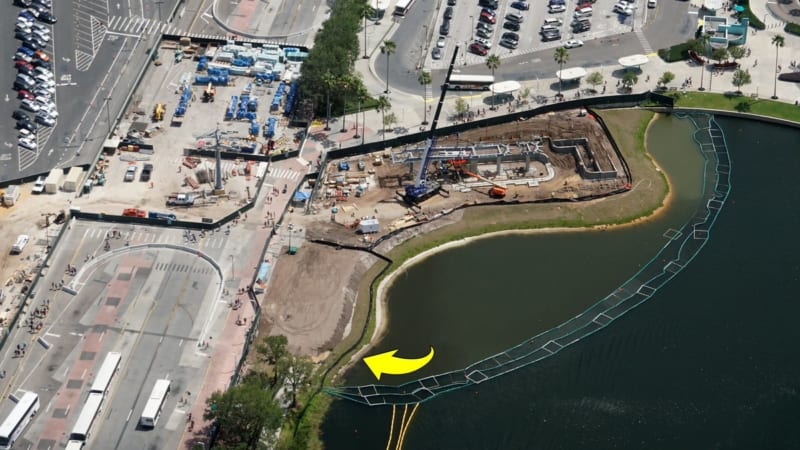 Are you saying the Skyliner doesn’t fit with the mid 1930’s Hollywood look??  At least we’re only in the parking lot! 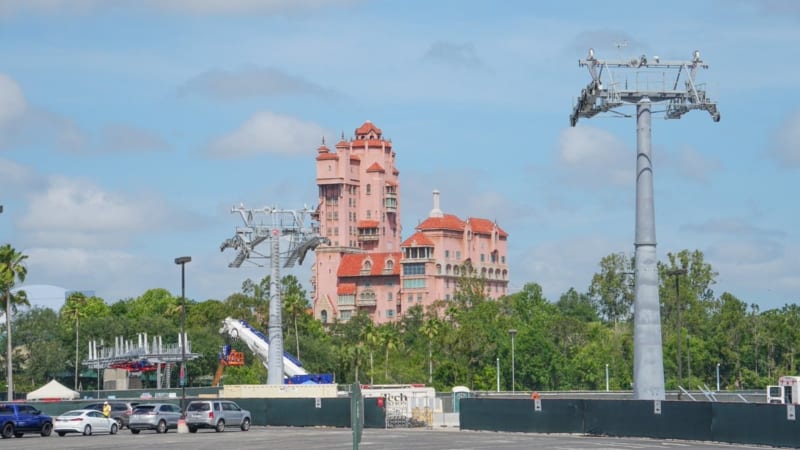 Now we get a closer look at the Disney Skyliner Station in Hollywood Studios.  You can see a similar landing system is being installed here as over at the Caribbean Beach station.  In this shot though since it’s not yet finished, you can get a really good look at the Bull Wheel which pulls the massive cables, and in turn moves the Skyliner cars: 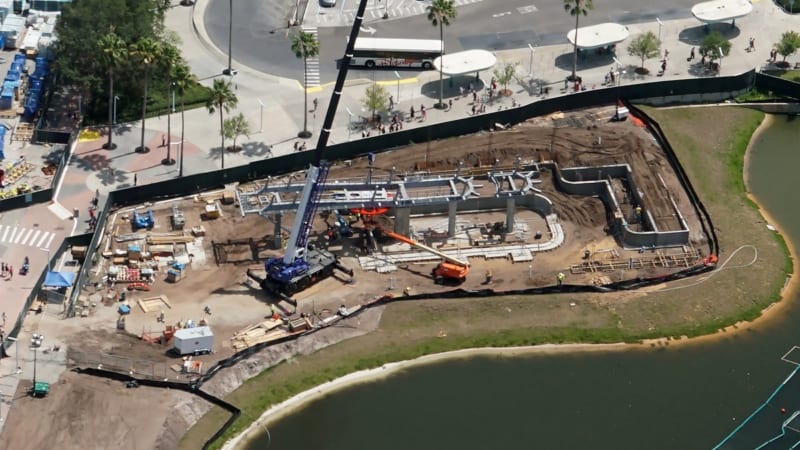 Here’s another shot of the landing at the station from the ground: 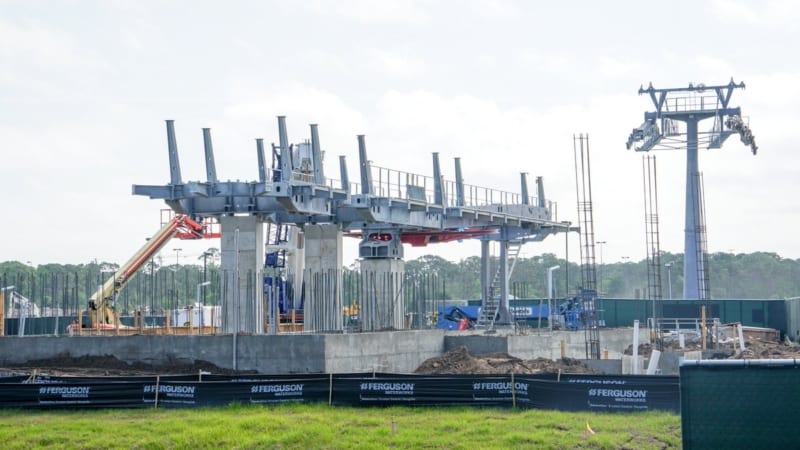 That wheel is HUGE! 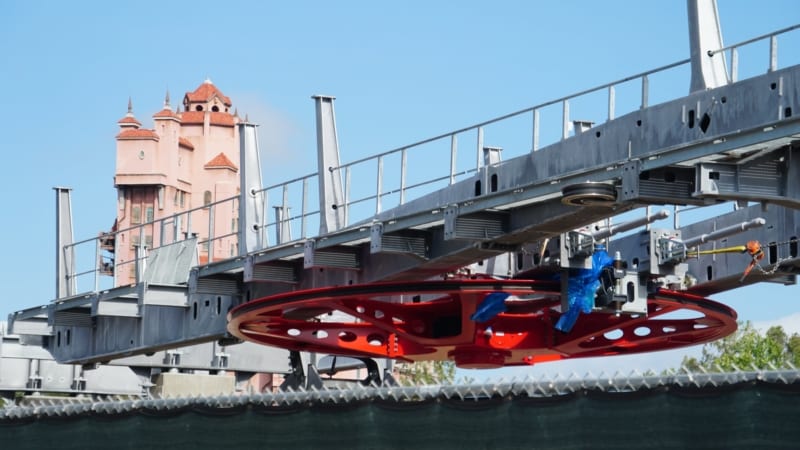 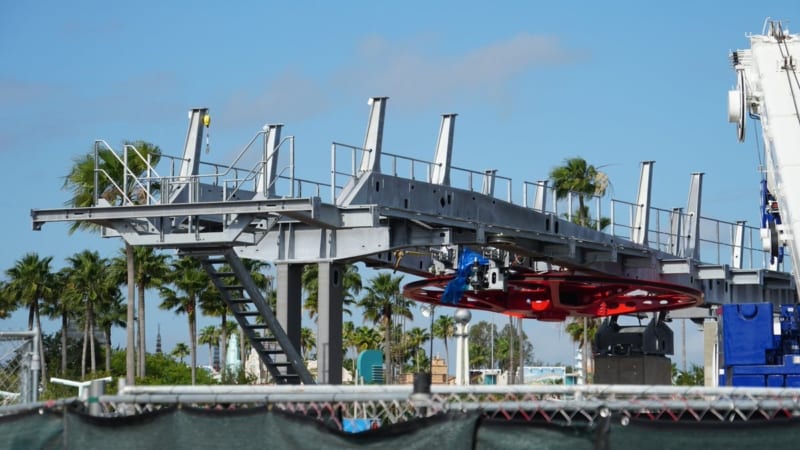 Moving on from the Hollywood Studios station we get over to the next stop after the Caribbean Beach, the Disney Riviera Resort station: 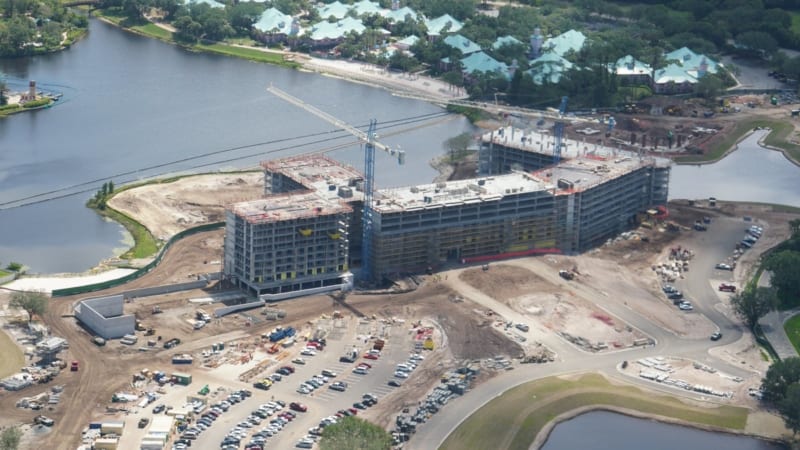 Progress is moving along very nicely here and construction has already risen to the 9th floor: 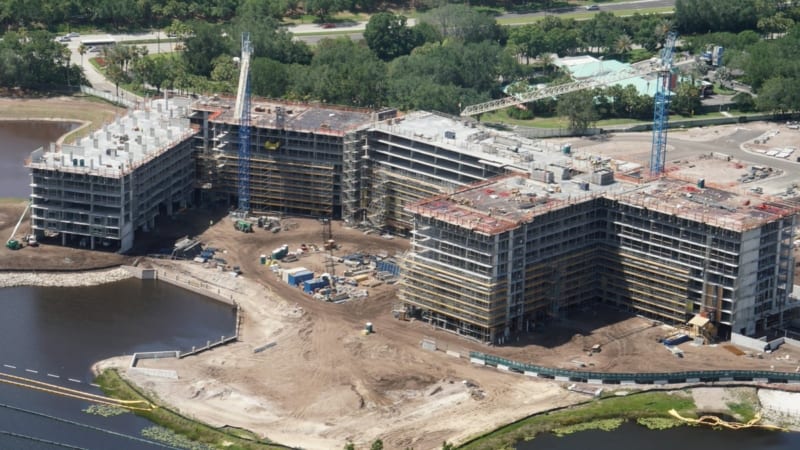 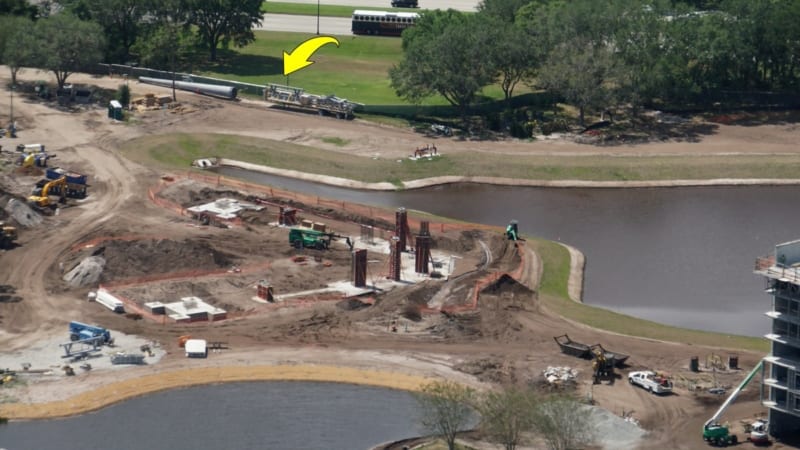 Lastly we can see the last leg of the Disney Skyliner which brings guests to Epcot.  Each arrow indicated are the individual Skyliner towers leading to the station: 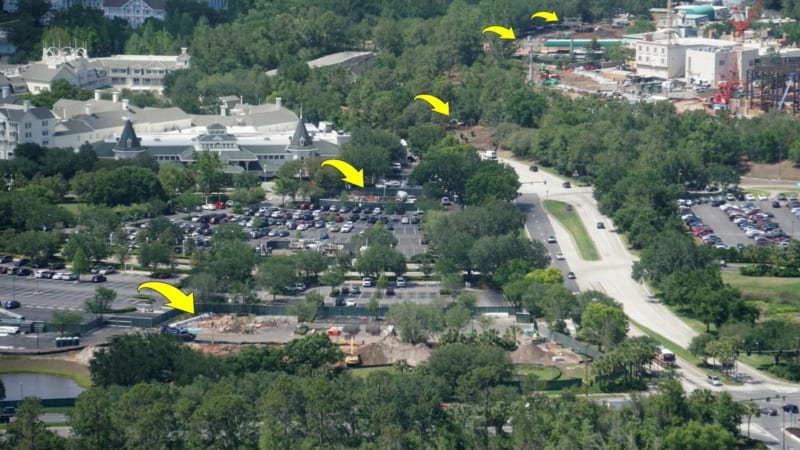 Some are wondering about the impact of the Disney Skyliner on the aesthetics in Epcot.  Though it’s not much imo, you can slightly see one of the Skyliner towers from World Showcase Lagoon, just behind the France pavilion.  For the most part you won’t see it in World Showcase: 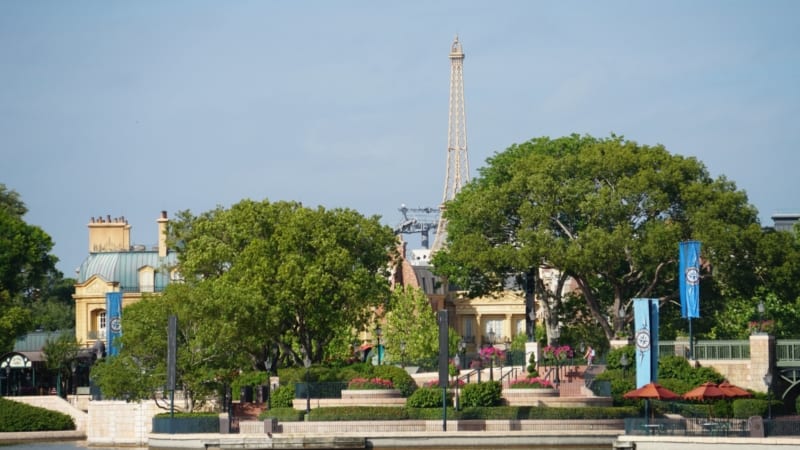 So that wraps up our latest construction update for today.  For more information read our guide to the Disney Skyliner which explains in detail the Skyliner Route, Map, Capacity and Opening.

I want to know what you think about the Disney Skyliner Bull Wheel Installed in Hollywood Studios and the other progress around property.

VIDEO: Behind the Scenes Look at Guardians of the Galaxy Coaster Construction
← Previous
PHOTOS: Toy Story Land Construction Update May 2018
Next →
Comments are closed.