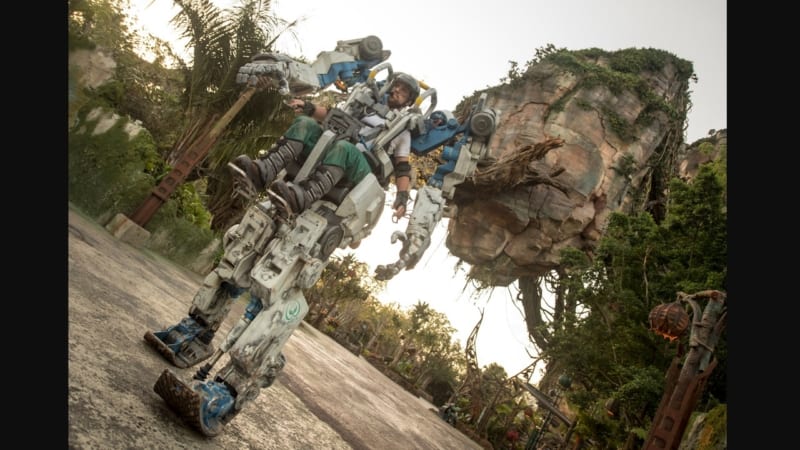 Even though the new Pandora Utility Suit has already been in the park for a couple of weeks, the Pandora Utility Suit officially debuts in Disney’s Animal Kingdom today!  This thing has been a smash hit with the guests so far as they’ve loved seeing a walking mech strolling around Pandora the World of Avatar!  The official debut was today because of the 20th Anniversary of Disney’s Animal Kingdom celebration going on throughout the park today.

Also called the AMP (Amplified Mobility Platform), this machine was created for military missions and destruction.  It’s quite impressive to behold as the Pandora Utility Suit stands 10 feet high and weighs 4.2 tons.  A human pilots the utility suit, but is still able to make quite a lot of movements and makes it look really light and agile.  There are even lots of details put into the suit with claw marks from a Thanator, the main predator on Pandora.

You can watch the Pandora Utility Suit interaction here:

It’s fun to watch and you can also listen to the AMP pilot as he talks with the guests on Pandora and shares info and details about the land.  Make sure to check out the Disney’s Animal Kingdom 20th Anniversary Guide for program times so that you don’t miss it!

The new show “UP! A Great Bird Adventure” also made its official debut in Disney’s Animal Kingdom today too.  Make sure to tune in for all the Animal Kingdom 20th Anniversary Celebration Coverage right here!

I want to know what you think about the Pandora Utility Suit officially debuting in Disney’s Animal Kingdom.