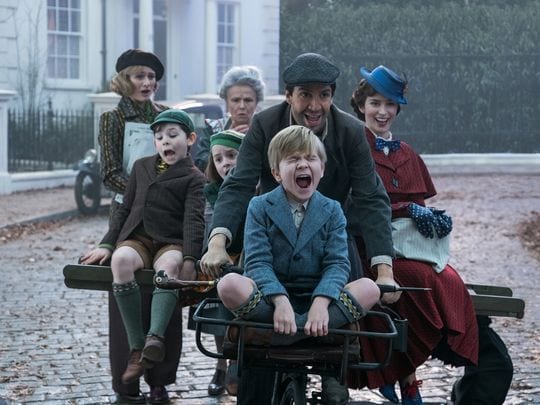 Ever since Mary Poppins Returns was announced by Disney, we’ve been eagerly waiting to find out any information we can about this sequel to the Disney classic.  Emily Blunt is taking on the huge lead role, and so far the early results are positive.  We’ve seen a couple images so far, and USA Today released the above new image from the film as part of an article of the most anticipated films of 2018, and it captures the spirit of Mary Poppins to a T.

This is what USA Today had to say about Mary Poppins Returns:

“Emily Blunt acknowledges that it’s hard to put in words what it’s like to play author P.L. Travers’ iconic nanny, though “joyful” and “utterly magical” do come up in conversation. Julie Andrews played the role in 1964 and the flying umbrella passes to Blunt for a sequel set in 1930s Depression-era London, where Poppins revisits a now-grown Michael (Ben Whishaw) and Jane Banks (Emily Mortimer) when their family needs her again. Back in the day, a spoonful of sugar helped the medicine go down, but Blunt’s Poppins hews more to Travers’ literary character. “I just loved how eccentric and wacky she is in the books — incredibly vain and rude to the children,” Blunt says. “As a British person, I really responded to that lack of saccharine relationships. I find it comforting the idea of someone just sweeping in who’s no-nonsense and cleaning everything up and making everything right again in a magical way that’s not sentimental.”

I want to know what you think about the New Image from Mary Poppins Returns.  Are you looking forward to the film?  Let us know in the comments section below!

Can’t wait to see it