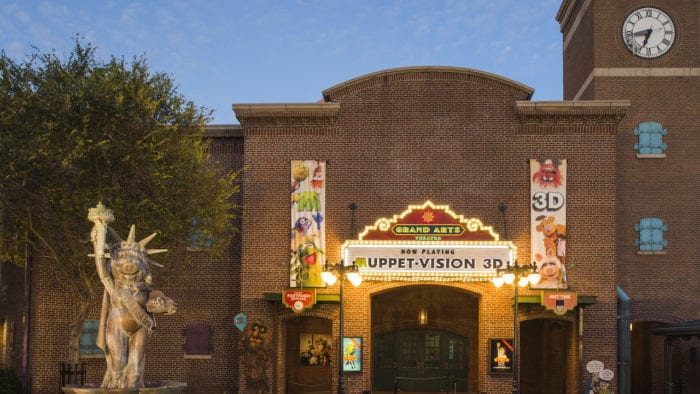 With all the changes in Hollywood Studios these days it’s hard to keep up.  Well, we’ve got one more for ya: Muppets Courtyard becoming Grand Park.  Huh?  Yes you heard it right.  The Muppets Courtyard is going to get a name change to Grand Park and that whole area of the park where the old Streets of America were and the now former Muppets Courtyard will become part of the new Grand Avenue we’ve recently heard about.

Grand Avenue is going to be a themed area in Hollywood Studios drawing inspiration from the vibrant culture of the modern-day downtown Los Angeles.  Think vintage office buildings and warehouses being turned into hip locations like music shops, loft apartments, and of course the new BaseLine Tap House which will serve California craft ales, lagers and cider, California wines on tap, and snacks like Bavarian Pretzels and Charcuterie boards.

What does this mean for Muppet Vision 3D?

Of course with this news, Muppets fans are sitting on pins and needles wanting to know what this move means for the future of the franchise in Hollywood Studios.  As the Disney Parks Blog wrote, Kermit, Miss Piggy and the rest of the Muppets are staying, as well as the Muppet Vision 3D show…at least for now.  I’m not convinced that this will be permanent though for a few reasons.

Yes PizzeRizzo and Mama Melrose’s Ristorante Italiano are staying, but the construction of PizzeRizzo last year leaves some interesting clues to the possible future of the Muppets in the Park.  Anyone else besides me notice the severe lack of Muppets theming inside PizzeRizzo?  One could right this off to Disney working on the cheap for the refurbishment, but it might be due to the fact that they don’t have intentions for Muppets theming to be a long-term part of the plan for the area.

Also with the Muppets theming being removed from the outside of the Grand Arts Theatre (that’s the new name), this could leave Disney’s options open for the future to bring in other shows into the theatre if they decide to give the Muppets the boot.  It has been more than 25 years that Muppets Vision 3D has been running and so I could see Disney wanting to do something new there, with or without the Muppets.  The Muppets just haven’t been the big draw the Disney was hoping for since acquiring their rights, and if another IP hit needs a new show it’s a perfect location.

Anyway for now Muppets fans can relax as the show isn’t going anywhere as of yet, just don’t relax too much.  Stay tuned more more updates as soon as we have them!

I want to know what you think about Muppets Courtyard becoming Grand Park.   Do you like the change?  What do you think the future holds for The Muppets in Hollywood Studios? What would you like to see come in there if anything?  Let us know in the comments section below!

Will miss the Muppets if they go. 25 years of our history with Disney. They always put a smile on our faces. Hope they find a role for them.

yeah, hopefully Disney finds a way to keep them I the parks, we'll see what happens...