After a year of waiting we got good news from the Disney Parks Blog yesterday that the newly reimagined Hall of Presidents is now open with the Donald Trump Animatronic.  It officially opens today in Disney’s Magic Kingdom, but it had a soft opening yesterday and guests were able to get a look at the new show and Donald Trump.

I don’t have to explain to anyone that the current presidency has been controversial to say the least, and because of that, speculation abounded that in the end perhaps Trump would not be included into the Hall of Presidents.

Disney quashed that speculation earlier this year and said the White House was in fact taking a part in the attraction: “The same thing that we’ve done with other presidents, is the same plan we have for President Trump,” said Jacquee Wahler, vice president of communications. 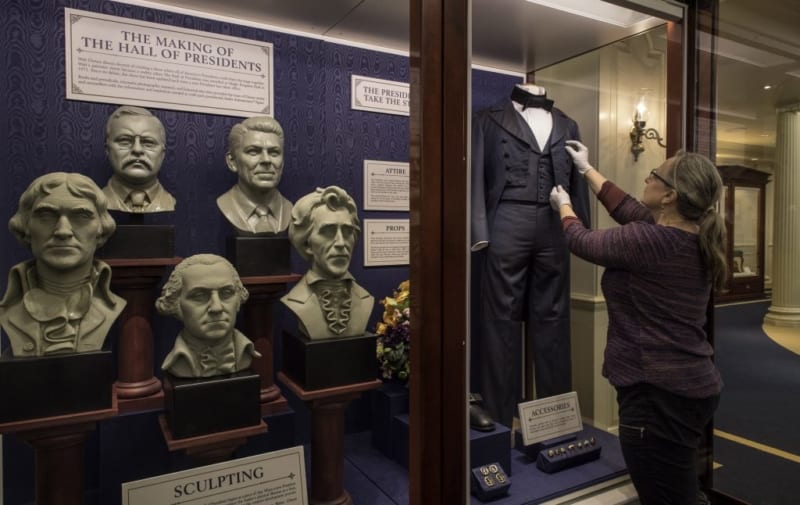 As has been the tradition with every new president since the attraction debuted, an Audio-Animatronics figure of President Donald J. Trump has been added to the show and features the latest advances in technology that enable smoother and more lifelike movements.  President Trump personally recorded remarks exclusively for The Hall of Presidents, just as each sitting president has done for the attraction since the early 1990s.

I think they did well on the animatronic figure in the way it moves and all, but the face is terrible imo, it looks really old.  Not sure if that was on purpose or what??

Here is a transcript of Donald Trump’s Speech:

From the beginning, America has been a nation defined by its people. At our founding, it was the American people who rose up to defend our freedoms and win our independence. It is why our founders began our great Constitution with three very simple words, “We the people.” Since that moment, each generation of Americans has taken its place in the defense of our freedom, our flag, and our nation under God. These are the achievements of the American spirit. The spirit of a people who fought and died to bring the blessings of liberty to all our people. Above all, to be American is to be an optimist, to believe that we can always do better, and that the best days of our great nation are still ahead of us. It’s a privilege to serve as the President of the United States, to stand here among so many great leaders of our past and to work on behalf of the American people.

What do you guys think of the new show?