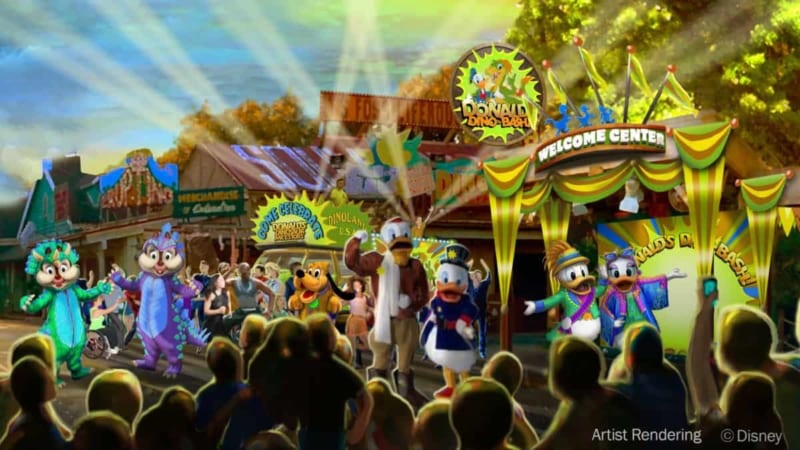 Even though it has been advertised as only a temporary addition to Disney’s Animal Kingdom, Donald’s Dino-Bash will become a permanent addition to Dinoland U.S.A. if successful.  This is going to be great for guests, especially those with little kids as the Animal Kingdom hasn’t really had many characters present.  In Donald’s Dino-Bash there will be eight station with characters like: Scrooge McDuck, Lunchpad McQuack and more.

Mark Renfrow, show director with Disney Parks Live Entertainment had these comments to make about Donald’s Dino-Bash:  “In the conceit of the storyline, Donald just found out he’s a descendant of dinosaurs. He’s thrilled,”  He continues: “It feels legit,” and even though it’s designed to have a “slightly temporary feel,” it will be permanent.

“It’s here forever,” Renfrow said. “It’s going to feel much more alive and definitely have so much more for the family and the kids.”

Even though Disney says it’s staying around, I still feel like this won’t be here forever, but it’s holding off for something bigger and better.

For example, there have also been rumors about Disney completely changing this part of the park and turning it into an Indiana Jones themed land, and with Indiana Jones 5 going into production, those rumors have only increased.  That would be a great long-term solution, but in the meantime seeing as Dinoland USA doesn’t get practically any love at all, this will be a move to try and get some people to that end of the park.

I want to know what you think about Donald’s Dino-Bash being a permanent addition in Dinoland U.S.A.